Depending on who you're talking to, a mention of "hominy" will elicit either complete and deep understanding from the other person or one of those nods that suggests that they don't want to admit their lack of understanding but-yes-I'm-listening.

I—and maybe you—have been in the latter group. But your chilis, pozoles, and weeknight nothing-in-the-pantry meals will be much happier if you dip your toes in over on the other side.

So, what is hominy?

If you grew up with or have spent significant time eating in the American South or Southwest, Mexico, or Central America, you probably already know that hominy is kernels of large white corn (a.k.a. field corn, a.k.a. maize) that have been treated with a process called nixtamalization: The kernels are soaked and cooked in a solution of water and wood ash or lime (not the fruit, but the mineral), which, as Lucky Peach explains, alkalizes the water—and, in turn, the corn.

Nixtamalization does a number of things. Chief among them are softening the kernels (making them easier to eat and digest, since it makes the corn's nutrients more available) and contributing the pleasantly tangy, almost metallic flavor that you'll recognize if you've ever made masa or opened a bag of fresh corn tortillas (made with masa, a.k.a. nixtamalized cornmeal) and sniffed deeply.

That's what hominy tastes like, too—a bit like a corn tortilla in the body of a fat, chewy corn kernel. ("...Your whole kitchen smells like a glorious, delicious wet tortilla," Rancho Gordo says of cooking pozole with the dried hominy they sell.)

Just like beans, you can buy them dried or canned. You have to soak the former overnight and then cook them for about 90 minutes; the latter is already cooked and can be added to whatever you're cooking in the same way you'd add a can of beans. (Some don't see much of a difference between the dried and canned versions, and others do—same debate as beans. Use whatever you prefer, but keep in mind that your hominy is quite soft once it's cooked, so just add it at the end of the cooking process of whatever you're making.)

So how to use them?

Hominy is maybe best loved for its role in the Mexican stew pozole (a.k.a. posole). "...In my humble opinion, the reason God made hominy was for pozole," writes jwolfsthal on the Hotline. Pozole always has hominy in it, as well as a rotating cast of chiles, pork or other meats, beans, and any number of garnishes (like avocado, radish, or cheese).

How to Make Vegetarian (or Vegan) Chili without a Recipe

Our Controller, Victoria Maynard says that it makes the best chili, and has eaten it in lots of Tex-Mex soups and chilis in Austin, where she lived for years.

For what it's worth, she uses canned—and so did I, when I made Deborah Madison's Genius Green Chile Stew, substituting hominy for the potato in the soup. It was killer, a little corny, a little spicy, a little chewy. I used another can to make mrslarkin's Minted Hominy, which was buttery and sort of popcorn-like, just as she writes in the recipe's headnote.

You can substitute hominy for potatoes in other stews or chilis (maybe Jacques Pépin's Corn and Hominy Chowder; or sauté or pan-fry it simply, as you would fresh corn—and then eat as a side or pile it into tacos or alongside eggs. 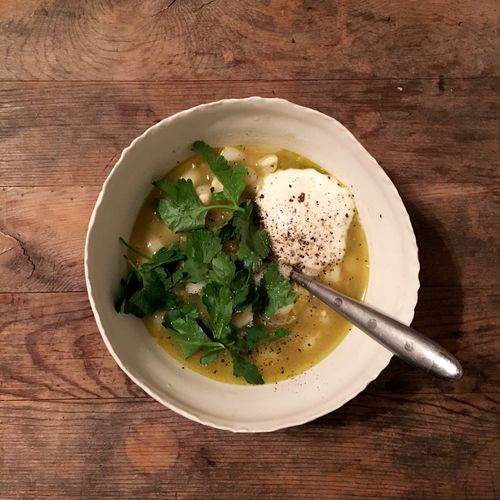 Caroline Lange over 4 years ago
59
deborah madison's green chile stew: sauté a small diced onion in olive oil until soft; add garlic and ground coriander and cumin. add 1 big chopped potato (or a can of hominy, like me) and two roasted, peeled, seeded and chopped green chiles. cook for a minute, then add a cup of water, bring to a boil, and simmer 25 minutes. serve with cilantro or parsley and sour cream.

How do you cook with hominy? Are you firmly in the cook-from-dried (or the canned) camp? Tell us in the comments.

Brianna P. March 31, 2016
I'm so happy to see this! Every winter I bring bak fire-roasted vegetables from Tucson and make posole to keep in my freezer. I don't think you can tell the difference between canned and dried, but with dried you can make them to your preferred consistence (soft or al dente or whatever).