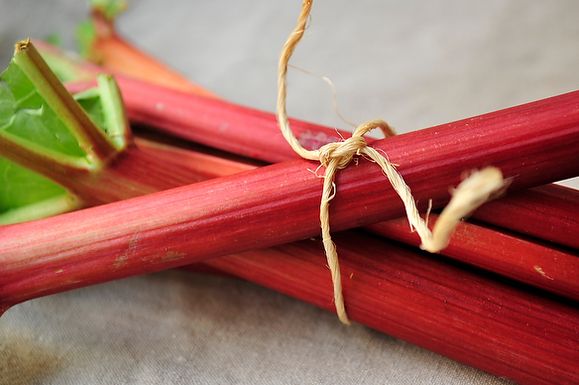 We love when you guys get together in the real world. The first food52 potlucks sprung up organically and we were happy to just sit back and report on the results (not to mention a Canorama, a pool party, a cookie swap, and the collaborative contesting of food52 supergroup Ginger's Kitchen). But now we want to see what happens when we give you a little nudge.

We'd like you to get together in your various corners of the globe and preserve some rhubarb, in any manner you see fit: jams and marmalades, pickles and compotes. And of course you'll probably want to potluck it up, for sustenance.

You have just over a month to plan, host, and report back to us by Wednesday, June 1st. Then we'll gather any photos, videos, recipes, and write-ups you share with us at [email protected] all in one place for the whole community to enjoy. Rhubarb may not be cropping up near you quite yet, but hopefully it will show up in the next few weeks, at least in the northern hemisphere. And if not -- don't let that stop you: throw a party and preserve something else!

We trust that you'll come up with all kinds of creative ways to attack this challenge, but we've also provided a couple recipes below to get the conversation started. You might also want to check out the entries in last year's contest for Your Best Rhubarb Recipe.

Now: anyone who's interested in hosting or attending -- pipe up in the comments section below! 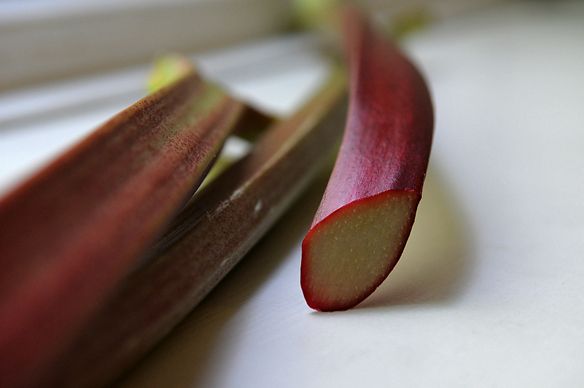 From The Complete Book of Home Preserving

Combine 3 cups sugar and 1 cup water, bring to a boil, and cook until the syrup reached the hard-crack stage, or until it becomes brittle when a drop is put in cold water. Add 1 quart diced rhubarb and cook until the fruit is tender and clear and the syrup registers 224° F. on a candy thermometer. Turn into hot jars and seal.

2. Combine the rhubarb, oranges, and orange zest in a large heavy enameled cast-iron or other nonreactive pot, add the sugar, and bring to a simmer. Cook, stirring occasionally so the fruit doesn't stick to the pan; you'll need to stir more often as the marmalade thickens. Skim the foam as needed. The marmalade is ready when a spoonful dropped onto a plate sets when cool.

3. Have ready 6 scalded half-pint jars and screw bands, with new lids (see Cooking Notes). Simmer the lids in hot water to soften the rubberized flange. Ladle the marmalade into the jars leaving 1/4-inch headspace. Wipe the rims. Put the lids on and screw the bands on fingertip tight.

4. Place the jars on a rack in a big pot and add water until it is 2 to 3 inches over the jars. Cover the pot and bring to a boil over high heat, then lower the heat to medium and boil gently for 15 minutes. Remove the lid and then, after about 5 minutes, remove the jars. Allow the jars to cool, untouched, for 4 to 6 hours.

5. Check the seals, and store in a cool, dark place for up to a year. Refrigerate after opening.

Always use a heavy nonreactive pot for preserves. I like enameled cast-iron because it holds heat well and the preserves tend not to stick or burn so easily.

To sterilize preserving jars, boil the jears in water to cover for 10 minutes.

"Fingertip tight" means the band is screwed on as tight as you can when screwing on a band using your fingertips -- in other words, not super-tight.

When filling jars, if you can't completely fill the last jar, don't sweat it -- just put that one in the fridge and use it up in a week or two.

To check the seal on a jar, remove the band and lift the jar by its thin lid. If it's sealed properly, it will hold.

To lessen the incidence of foam, add 1/2 teaspoon butter to the marmalade while it it cooking.

ACS May 28, 2011
BTW Washington State is top rhubarb growing state. The crop was late due to cold spring, but the harvest just came in over the past 2 weeks. You can often find it frozen, IQF in 1" pieces, really convenient. Check Whole Foods for the frozen product.
I always called it rhubarb sauce, but preserves woks too...and it's awesome with plain Greek yogurt. I make rhubarb pie and crumble often because hey, it's easy as pie!

Panfusine May 26, 2011
New to rhubarb,... but amazed at its potential, looking fwd to the results of the project...

MrsWheelbarrow May 15, 2011
DC area Food52'ers - this is a reminder that we're Rhubarbing on 5/29. Details will be mailed out tomorrow 6/15, so email [email protected] if you're not on the List already.

Sagegreen May 15, 2011
Anyone possibly free to join us out in western Mass. on Sunday May 22nd? Send me an email on this site if so. That looks like my free window. And we finally are seeing rhubarb, too!

fiveandspice May 15, 2011
Oh, I wish I could come! We had so much fun with our little party yesterday, and truly wish you could have been here. We're going to be at a wedding this weekend though. However, we should all get to work on planning a Massachusetts food52 pickling party and potluck and find a date and a place where we could all get together.

Sagegreen May 27, 2011
Oh I wish you could have come last weekend!! I wound up being alone, so made aioli and rhubarb alternately! I guess my solo results won't be worthy of sharing. Now I will be in Brooklyn until Monday. Darn, the timing is just off.

Bevi May 27, 2011
If you get even a couple of hours to slip away, go to the Bklyn. flea Smorg on Sat. or the regular flea on Sunday. My daughter is there and introduce yourself.

Sagegreen May 27, 2011
Thanks so much for the tip: Sunday morning is free. I will look for your daughter there.

Sagegreen May 30, 2011
The rhubarb and all the preserves at Maiden Preserves in Brooklyn you can find at the Smorgasbord. Bevi's daughter Eva is one of the proprietors. Each jar is a jewel in its own right. Anyone who is near Brooklyn Flea Saturdays should so stop by!!!! The packaging is really elegant simplicity. An outing really worth the trip. Check out at online at: maidenpreserves.com

Some food for thought or ideas for the various pot lucks that are happening around our get togethers!

LittleKitchen April 4, 2011
Anyone in Houston??

aargersi April 7, 2011
Waverly is in the Houston area too!

coconutlime April 4, 2011
Anyone in Baltimore up for it? email me coconutlimeblog @gmail.com

MrsWheelbarrow April 4, 2011
Hi CoconutLime - There's a group forming in DC, if it's not too far for you to come. We're meeting 5/29 at my house. Email [email protected] for details.

jamnbake April 3, 2011
Oooh. I'd love to host a canning group! Anyone out there from Madison?

SBKSB April 3, 2011
Amanda--the Plum Torte recipe (that you said was the most-mentioned when you were gathering favorites for the New York Times Cookbook) works very well with rhubarb. Just dice uncooked stalks to 1/2" and add them to the batter after the dry ingredients; sprinkle with turbinado or white sugar. Lemon zest in batter also good here.

GoodFoodie April 3, 2011
I'm on the North Shore of Chicago. Anyone out there?
I am a rhubarb nut. After living in Germany where rhubarb is a national icon, I became a convert. I have a Rhubarb recipe folder going - including my famous Rhabarber Kuchen!

wanderash April 4, 2011
I'll be moving to the North Shore of Chicago in July. I will have to sit this one out from my rhubarb-less post in Mexico, but I am SO EXCITED to be a part of this sort of thing in the very near future!!!! ....hopefully, something that will involve eating your famous Rhabarber Kuchen!

littlegaper April 4, 2011
I am North of Chicago, too, and willing to give this a go. Not sure when we will have local rhubarb.

GoodFoodie April 4, 2011
Good luck with your move. The rhubarb should be out by then! Here's my email for that recipe (or moving tips since I had moved 4x in 4 years): [email protected]

cheese1227 April 3, 2011
I'm in Carlisle, PA. I tend to participate in the DC Food52 group as to date there hasn't been a group that's cropped up in Philly. I'd be happy to join in there too!

Kiss M. April 13, 2011
I'm inFurlong, PA.... just outside of Doylestown. Would love to get a group together. Perhaps at a local farm would be fun. I know quite a few. We could film it!

Stirnourish March 31, 2011
Friendlyoaks, JoanG, ALittle Zaftig and MplsCitified - so great to hear that there is a Mpls/St. Paul contingent! Here is my email address: [email protected] Send me an email with your contact information and I'll coordinate. Happy to have it at my place! I am blessed to have a kitchen with some elbow room. Looking forward to hearing from you!

MegB March 31, 2011
A little daunted by wading through all these locations/replies, but if there are any Netherlands cooks out there (den Haag area? I'm in Delft) I'd be curious to chat. Rhubarb's definitely already at the markets here.

Kristen M. March 30, 2011
So exciting to see all these different rhubarb parties brewing! Here's a tool we heard about a while back that might help you keep track of who's bringing what: http://signup.pleasebringit.com/

friendlyoaks March 30, 2011
Stirnourish, joanG, and ALittleZaftig, I am in St. Paul. I don't know much about canning, but it would be fun to give it a try. Count me in.

Amanda H. March 30, 2011
Merrill and I would love to host a rhubarb-ery day at my apartment in Brooklyn Heights. We're thinking Saturday May 21. We can fit 15 people. Let us know who would like to attend!

ALittleZaftig March 30, 2011
I'm in New York that week and would love to come! So excited!

theyearinfood March 30, 2011
Heck, maybe I'll just have to hop on the magical train that departs San Francisco and arrives Brooklyn.

gingerroot March 30, 2011
@yearinfood Save me a spot on the magical train...I just have to figure out how to get to SF from Honolulu (magical boat?)

fiveandspice March 30, 2011
Oh man, pretty much only this could make me give serious consideration to taking the Fung Wah bus...

luvcookbooks March 31, 2011
can come in the afternoon if there is room, working in the am

ALittleZaftig March 31, 2011
If there is room for one more, my college-age daughter will be in town with me and is begging to come along. She's a pretty great cook, too.

Amanda H. April 2, 2011
Wow, looks like we have a good group forming for the Brooklyn group project. Please email [email protected] with the subject line Rhubarb with Amanda & Merrill, and then we can start a thread to work out the details. Looking forward to it!

Amanda H. March 30, 2011
So.... Mother Nature and MrsWheelbarrow have weighed in and because rhubarb won't be available in some places until later in the month, we've decided to extend the deadline to JUNE 1. Please note this -- we look forward to seeing everyone's projects!

dymnyno March 30, 2011
Great! No rhubarb was to be found yesterday in the Napa Valley!

Lizthechef March 30, 2011
Thanks for extending the deadline. I have no idea why the rhubarb season is later in CA than in the East, but, indeed, it is. Early June is pushing it even for San Diego, believe it or not.

MrsWheelbarrow March 30, 2011
Hi Amanda & Merrill - After some research, we're finding rhubarb won't be locally available until the beginning of May - maybe after the 10th. Anyway we can move the deadline a couple of weeks?

Sugartoast April 27, 2011
Hi Mrs Wheelbarrow: It's your Ch Ch neighbor here, just wondering if I might be able to join in the project? Not sure if it's taken place or if you still have room, but on the off chance that your still welcoming participants, please let me know!