This is the fourth of arielleclementine's Big Feast posts. Read about her blueprint for the Science! themed feast, all about powdering olive oil (and bacon fat!), and her adventures in spherification. 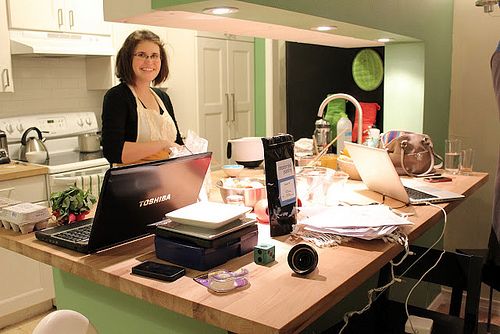 (Me, in the thick of party preparations, the night before the big feast.)

A week or so before the party, I made a to-do list of everything that would need to be done in the 48 hours leading up to the party.  Absolutely everything that could be done in advance was scheduled for Friday, and the last minute stuff was listed in the order it should be done on the day of.  But now that it was actually time to start cooking, I was nervous.  My normal MO for dinner parties is to serve dishes that I've made before -- many times if possible -- to make sure that I really like what I'm about to serve, and to help me feel more confident that I won't mess it up.  For this party, I had only made two of the seven courses before: the herbed beef skewers, and the chocolate cake, figuring that even if things go horribly, we'd still be able to eat steak skewers and a lot of cake! I just had to keep reminding myself that, for this party especially, the whole point was to serve new and surprising dishes, and if they weren't quite what I was expecting, then we'd at least had a fun time trying them.  I adopted this as my mantra.

As we actually began to cook, there was so much to do that I sort of forgot my nerves. I kept my head down, tackling one task at a time, and using the strikethrough command on my to-do list when I had finished a job (so satisfying!).  My sister Helen, my best friend Molly, and my husband Andy were all instrumental in the process.  Molly helped cook and took care of all of the decorations (and had to tell the birthday boy Dustin an increasingly elaborate lie to explain her near two-day absence), Helen took hundreds of pictures of the preparations, and Andy was left to entertain baby Henry.  But after many hours, we got it done! Here's how it played out:

Friday (The Night Before the Party): 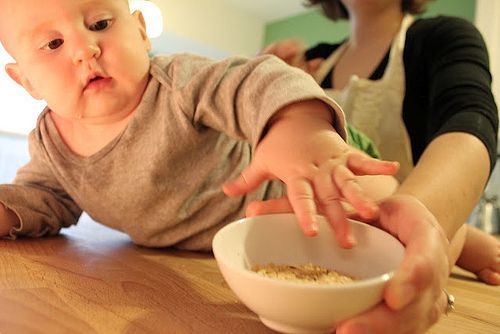 Henry samples the Japanese 7 Spice/Pop Rock salt that will be sprinkled on the pork belly ssäm. Thanks to mrslarkin for the tip! 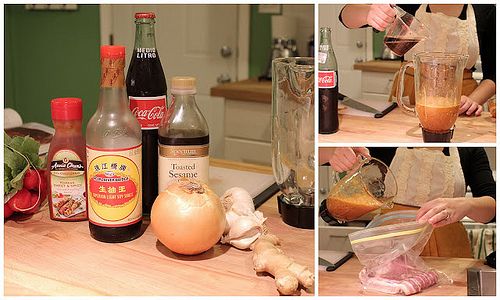 The marinade for the sliced pork belly from Richardson Farms. 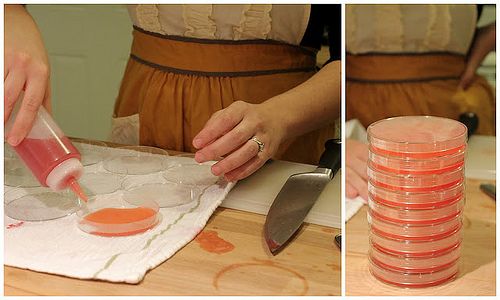 Filling the petri dishes with the blood orange gelée. 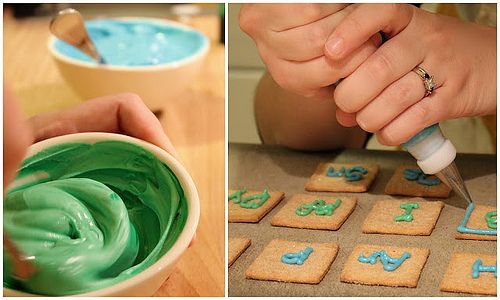 Molly baked the cake while I worked on the decorations. We had originally planned to make a complete periodic table cake, but that's 118 tiles, folks.  Instead, and to make it more birthday-y, we spelled out 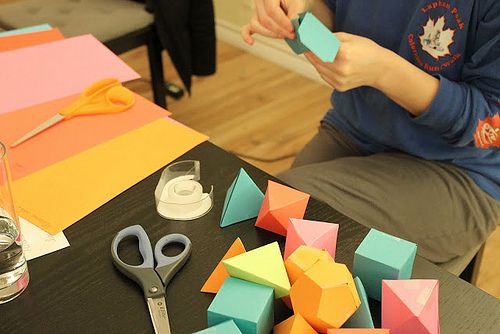 Molly makes approximately one million platonic solids from folded cardstock for decorations. Time to get some sleep!

Stay tuned tomorrow for the full report on the day of Arielle's Big Feast!

Le Creuset has generously offered to reward our Big Feasters for all their hard work, and as our first Big Feast, Arielle will win, in the color of her choice (flame, cherry, fennel, or cassis): a 4 1/2-quart round French oven, a 10 1/4-inch iron handle skillet, and a 2 3/4-quart precision pour pan. Pitch us your Big Feast at [email protected] for a chance to win $500 in Le Creuset booty.

Inspired to play with molecular gastronomy at home? Check out a very cool Molecular Gastronomy kit from Molecule-R, available in the shop now!

arielleclementine.com
I have always loved food. My favorite books as a kid always featured food (eg. The Berenstain Bears Get the Gimmies- so much candy!) and I loved cooking shows like Yan Can Cook and The Frugal Gourmet. I started cooking the Thanksgiving dinner for my family when I was 13 years old. I have food52 to thank for inspiring me to come up with my own recipes, as well as for introducing me to a community of fantastic cooks and their amazing recipes. I try my best to cook locally and seasonally, and I tend to prefer straightforward, simple recipes where the ingredients get to shine. I live in wonderful Austin, Texas with my husband, Andy (a video game programmer) and my son, Henry (an 8-month-old who loves to eat).

arielleclementine March 26, 2012
thanks so much everyone, for all your kind comments!!

arielleclementine March 22, 2012
thanks for your comments cheese1227 and Bevi!! i'm very excited for tomorrow's post too! hope you like it :)

Greenstuff March 22, 2012
You continue to rock! And make me feel o-l-d. Ds, Darmstadium, wasn't synthesized until the 90s. I had to go look it up! I also loved that you worked your Hotline question into the story line, and can not wait for the finale, Ds Sn's big day.

arielleclementine March 22, 2012
thanks Greenstuff! we have a set of periodic table blocks for henry, so one day before the party when we were playing in his room, i worked to see what we could spell out with the element symbols- it's tricky! here's a link in case you're interested: http://www.imaginetoys.com/uncle-goose-elemental-block-set

creamtea March 22, 2012
What fun! You really don't look nervous at all--you look cool as a cuke. Love the platonic solids and can't wait to see the end result!

arielleclementine March 22, 2012
you're too kind! thanks creamtea! i was ok in the thick of things, but when i stopped to think about it i was nervous- when i was trying to fall asleep that night, i was most worried about the timing aspect- allowing myself enough time to do all the last minute stuff (like cook the meat and fry the fried items), but not so much time that the food started to feel like it'd been sitting around all day. tricky!

mrslarkin March 22, 2012
hee, you're welcome! i can't wait for the Science! party! Will there be a Science! playlist too?

arielleclementine March 22, 2012
thanks, mrslarkin!! when we talked about music, i was originally thinking super geeky (ahem: http://www.youtube.com/watch?v=DYW50F42ss8) but Molly, who is infinitely cooler than me, thought of the soundtrack from Drive, which I haven't heard but apparently features a lot of edgy songs with electronic/techno-ish sounds, which we thought would be perfect! but when the party started we forgot to put it on :/

I LUV the Drive soundtrack. The movie is super intense - don't watch it if carnage is not your thing. (hmmm...what does that say about me? Maybe I was an abattoir in a previous life.) Bought the soundtrack after seeing the movie. The first few songs are so amazing, then it gets a little creepy.

Burnt O. March 22, 2012
So inspiring! And what fun! I've been thoroughly enjoying this all week. It's going to be a VERY tough Feast to beat!

Shalini March 22, 2012
Arielle, what an amazing amount of colour, energy and work! Great job, you look like you're having so much fun! Congratulations!

arielleclementine March 22, 2012
thanks so much, Shalini! it was an absolute blast to work on- so unlike my day-to-day cooking!