All week, we'll be featuring Japanese-turned-Tuscan-turned-Aussie writer, photographer, and blogger Emiko as she documents her whole-hog feast, La Maialata.

Today: Emiko goes hunting for all the pork she'll need for La Maialata -- liver and all. 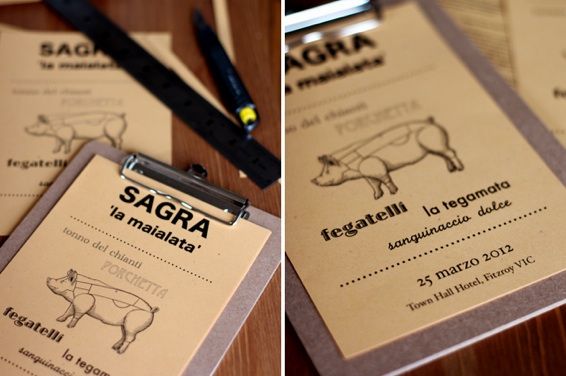 Coming from a life in Tuscany, where small farms are still the norm and finding offal is as easy as a trip to the supermarket, my husband Marco’s first question when we moved from Florence to Melbourne, Australia, a few months ago was, “Will we be able to find pork liver?”

It’s his favourite, so naturally, there was some concern. Melbourne, we discovered, not only lives up to its tags of the most liveable city in the world and food capital of Australia, but is also home to Australia’s largest Mediterranean-origin population. The Italians, Greeks, Lebanese and Maltese have brought over all the food they couldn’t live without and have been enriching the Anglo-Australian diet for over half a century. We’re going to be just fine.

We also want the pork liver for our big feast, which we have affectionately nicknamed ‘La Maialata’ (maiale means pig in Italian and maialata implies a certain amount of ‘pigging out’), where a different cut of pork and a fair bit of offal, will feature on each of the courses of the five-course menu. Our pig shopping list includes shoulder, loin, cheeks, liver, caul fat and a couple of litres of blood. The first thing we need to take care of is the offal. 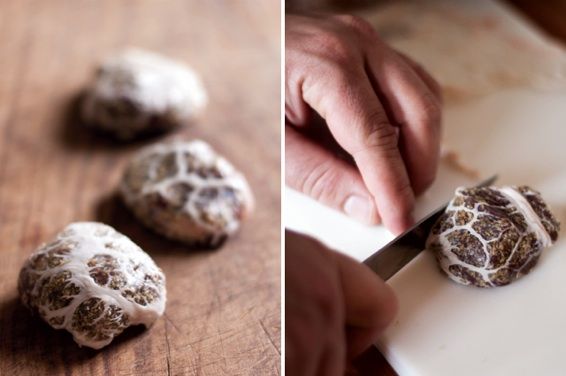 A visit to our local butchers at Brenta Meats (Italians, of course) proves that pork liver is definitely available. It just has to be ordered a week in advance – we’re not in the right season for pork offal. In fact, even in Tuscan supermarkets, where you can normally find liver, tripe, heart and lungs stacked in their packets next to steak and chicken, offal (especially pork offal) is near impossible to find if it’s not the right season. But in the winter months offal is more readily available, which is also when the ‘less noble’ cuts like shanks, tail or tripe are the perfect ingredients for slow cooked, warming meals.

It doesn’t take long for us to become regulars at this friendly family-run butcher shop, especially when their attention to quality meat is so standout, plus Marco can relish in being able to banter in his own language with the butchers.

Butchers do like to chat, I discovered, especially about food. I spoke with the charming Andrew Brenta, who carries on the family tradition at Brenta Meats, about offal trends and something I am constantly curious about – why many don’t seem to eat it. 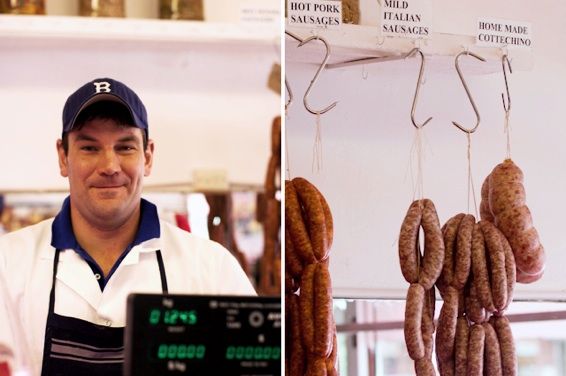 Andrew -- along with another one of our butchers, Leo Donati of Donati's Fine Meats -- has noticed that in the last three to four years offal is slowly becoming more popular, something he attributes to the rising interest well-known restaurants have in offal, but until now the main request for it has come from first generation Italian immigrants who want tripe and oxtail to recreate the most traditional meals of trippa or coda alla vaccinara. What animal are the Australians asking for? Interestingly (says me with pork on my mind), it is beef offal that is most commonly requested.

As we chat longer, we talk about why offal isn’t popular with Australians who don’t have an Italian or other background where there was a strong tradition of cooking with it. Perhaps it’s simply a question of knowing what to do with it and how to cook it deliciously? Or, as Andrew suggests, it’s perhaps a negative “perception” of offal. He rattles off some of his Calabrian grandmother’s offal dishes that he grew up on, such as tripe cooked with chickpeas in a spicy tomato sauce, that would put to shame the British-style boiled tripe in white sauce that many Anglo-Australians recall in horror when they see tripe in the butcher shop windows. 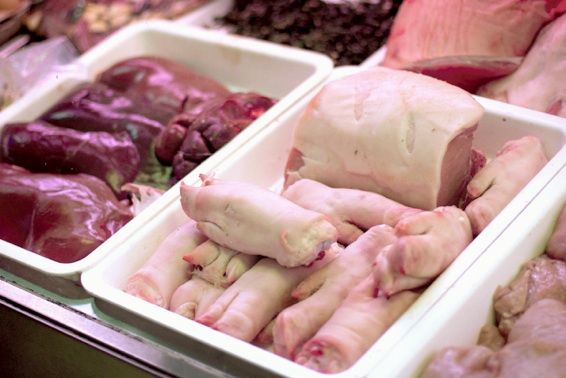 We order our feast’s offal – pork liver, caul fat and cheeks – which will be ready for pick up in a week and soon discover that sharing a love of offal is the best way to become friends with your butcher.

Our next stop, which we pick up a couple of days before the feast itself, is for the shoulder and the loin, two relatively popular cuts and easy to get so we plan to pick it up along with our organic vegetables at Melbourne’s famous Queen Victoria Markets. The shoulder is an incredibly cheap cut, which falls apart fabulously with long, slow cooking. The loin is something we want to roast in the style of a porchetta with plenty of herbs and garlic and slice thickly for panini. We want something quite special for this, so we’ve done a bit of research and come to the markets to find some local Berkshire pork from McIvor farm, which practises ethical farming and has a herd of free range, mud-wallowing, grass-grazing, happy pigs. 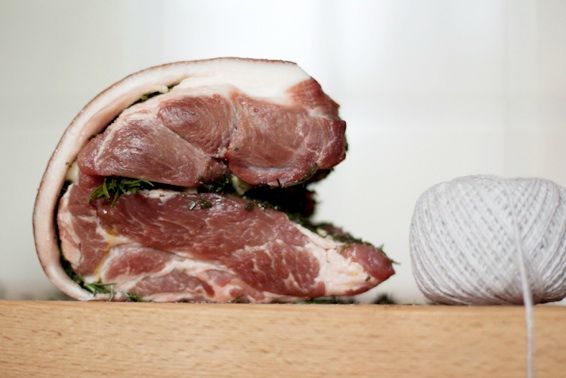 The last major item on our shopping list is pig’s blood – without it our dessert, a southern Italian specialty made with pig’s blood and dark chocolate, will remain something we only talk about but never get to taste. This is proving difficult to find, but we finally got our hands on some (stay tuned for more on pig's blood and chocolate).

After all that chatting, I come away with a couple of sneaky tips up my sleeve that these wise and charming butchers have shared with me, which I will now share with you.

• Andrew from Brenta Meats reckons that there are some good value, underrated cuts out there that people should try to use more – two of his favourites are beef cheeks, great when slow cooked and made into a ragu for pasta, or oyster blade steak (a cut of beef from the shoulder known as ‘flat iron’ or top blade steak in the US and butlers’ steak in the UK) for slow roasting, casseroles or steaks.

• The organic butcher, Hagens, where we got the Berkshire pork noted it was a particularly succulent and tasty pork thanks to its marbling. Fat = flavour, people, don’t be afraid of it!

• Leo from Donati’s says trust yourself, rather than the concept of a use by date when it comes to understanding the freshness of a product – your nose and your eyes will let you know! 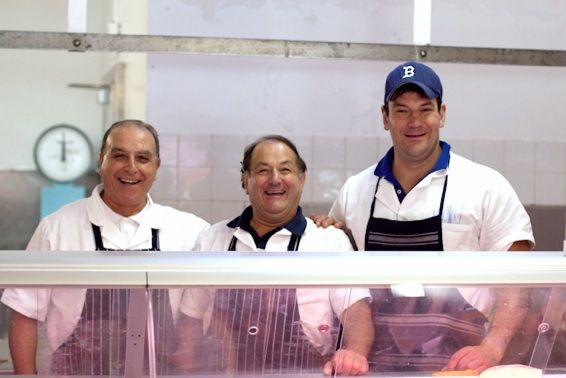 Le Creuset has generously offered to reward our Big Feasters for all their hard work, and as our second Big Feast, Emiko will win, in the color of her choice (flame, cherry, fennel, Caribbean, or Marseille): a 3 1/2-quart round French oven, a 9-inch iron handle skillet, and a 1 1/4-quart precision pour pan. Pitch us your Big Feast at [email protected] for a chance to win up to $500 in Le Creuset booty. 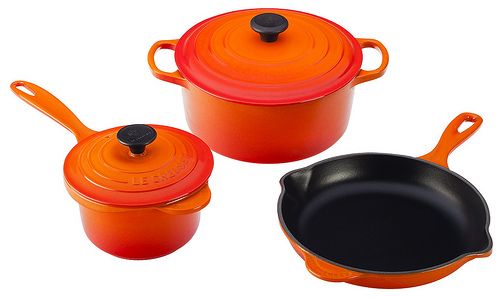 OffallyGood April 18, 2012
What a lovely post! I want to make an offal feast too ... maybe as a crescendo for my blog http://offallygood.wordpress.com
I want to make the blood dessert too, but you seem to be only be able to get dried pig's blood here :(

Kitchen B. April 18, 2012
Emiko - so looking forward to this feast! I'm thrilled at how creative and diverse we all are with food. Trust Australia will be great for you

fiveandspice April 17, 2012
Spellbinding! I can't wait to see the pig pieces play out!!! Such a neat concept for a feast.

hardlikearmour April 17, 2012
Love your concept, and can't wait to see the rest of your feast! I'm definitely intrigued by dessert!

ChompingTheBigApple April 17, 2012
Yes!!!!! I was hoping the little comment on Emiko's blog the other week meant she was going to be doing a Big Feast here. So excited to see the process.

student E. April 17, 2012
Wow, so excited to continue reading about this epic feast! I'm very intrigued by the pig's blood and chocolate!