To the uninitiated, spiciness is binary: just hot or mild. When you look closer, though, you'll find that "spicy" can encompass fruity, meaty, and citrusy flavors. Today we're looking at 9 spicy members of the plant family Capsicum -- hot peppers -- and how they differ from each other.

As you may know, spiciness is measured in Scoville units, which measure the capsaicin present in a pepper. The ones we're discussing today range from Anaheim and jalapeno peppers, just 1,000-2,500 Scoville units, to Habaneros and Scotch Bonnets, which soar up to 100,000-350,000. And that's not even counting Indonesian Bhut Jolokia peppers, which can reach 1,500,000 Scoville units!

When you're shopping for hot peppers at the farmers' market, look for smooth-skinned, unblemished peppers with stems in good condition -- peppers with mushy spots will quickly go bad. It can be difficult to predict spiciness, but the striations are a clue (more on this below), and older, larger peppers are spicier than their younger counterparts. The weather plays a role, too. Peppers need sunny weather to grow to peak spiciness. Rainy Pacific Northwesterners, take note! And finally, color is an indicator: fully mature peppers turn red, yellow, or orange -- yes, even the ubiquitous green jalapeno will turn red given enough time!

As anyone who's ever touched their eyes after chopping a jalapeno can tell you, capsaicin is no joke. Always protect your skin when handling the insides of peppers -- the inner ribs and seeds contain the highest levels of capsaicin. Because it quickly absorbs into the skin, it's difficult to wash off with just soap and water. Elise Bauer at Simply Recipes recommends, if you don't have any plastic wrap or gloves lying around, to coat your hands lightly in oil before handling peppers. The capsaicin will adhere to the oil, which can be washed away. Still, don't go rubbing your eyes immediately afterwards! 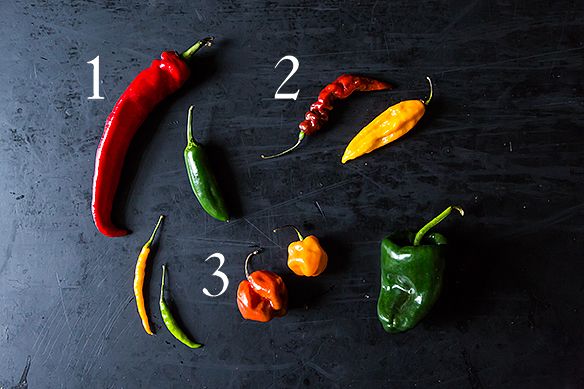 1. Cayenne - As you might have guessed, this is the pepper that's dried and ground into the powder that everyone has languishing in their spice cabinet. Its clear, hot flavor is worth seeking out if you've only encountered cayenne in its dried form -- try it in your next chili or salsa.

2. Anaheim - Anaheim peppers are also commonly sold when still green -- fully mature peppers, like this one, are often dried for use in chili and the like. The thick skin of Anaheims is perfect for roasting and cooking without having them fall apart.

3. Scotch Bonnet - Don't let the name fool you -- this pepper is named for looking like a tam o' shanter, but it's actually Caribbean. Scotch Bonnets are one of the spiciest peppers around, but drop one into a stew or rice dish and you'll also notice its sweet undertones. 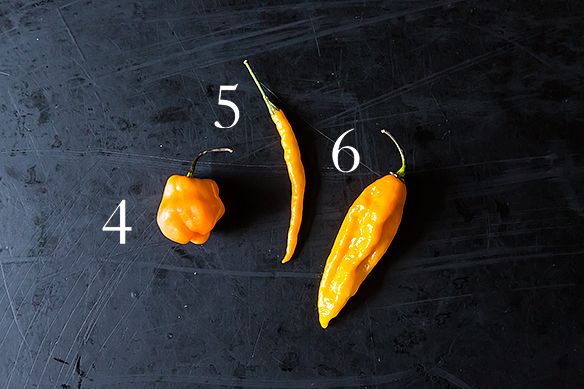 4. Habanero - These South American peppers are the most commonly available insanely spicy pepper around. Its scientific name is Capsicum chinense -- a misnomer for which you can thank Spanish explorers in the New World. Habaneros have a citrus-y, floral heat that's perfect for salsas and marinades alike. Whatever you do, just don't dare your friend to eat one whole.

5. Bird's Eye Chili - Birds love these tiny South Asian chilis, hence the name. They're often eaten raw -- chopped and stirred into fish sauce for dipping, sprinkled into green mango salad -- or pureed into curry paste. A little bit of bird's eye chili goes a long way, so it's best to buy them just a few at a time. This one is yellow and quite spicy; you'll see a green one if you keep scrolling down!

6. Fatalii - This gorgeous African pepper is just as hot as a habanero, but with an even stronger citrus flavor. Their skin is very thin, making them ideal for salsas and hot sauces, as well as for drying. 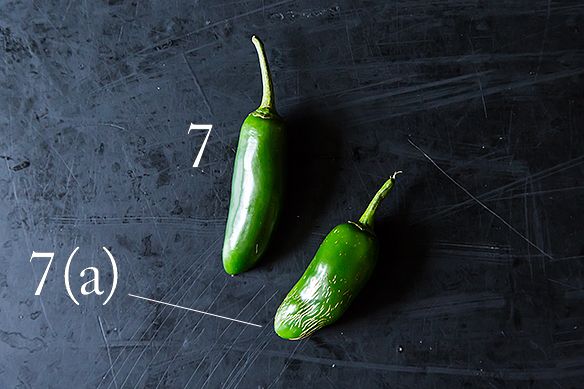 How Should a Pepper Be?

7. Jalapeno - These Spanish and Mexican peppers are the most commonly available hot pepper, hands down. Their heat, which comes primarily from the seeds, is pretty basic, and the flesh is almost as mild as a green bell pepper. This means they're perfect for stuffing, frying, mild salsas, and the spice-averse -- the Miss Congeniality of the hot pepper world. A word of warning: due to the popularity of jalapeno poppers, the strains of jalapeno you find in grocery stores today have been bred for their large size and mild flavor. Stick to farmers' markets for the real deal!

7(a). I'm Pickin' Up Good Striations - Forgive the awful pun, but here's a useful tip. Peppers of any variety with striations -- those white marks indicating periods of growth -- are much hotter than their smooth-skinned counterparts. Think of them as stretch marks for spiciness, and either stay away or snap them up depending on your palate! 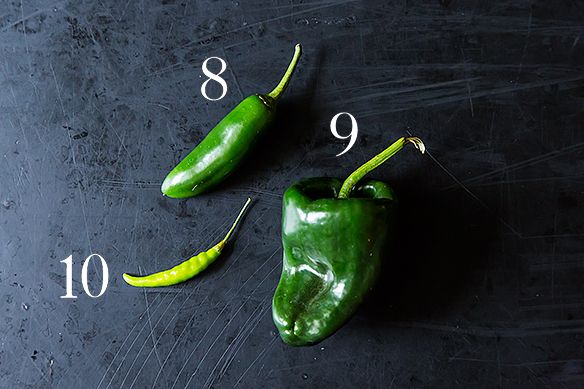 8. Serrano - Serranos are like the jalapeno's cool older brother -- they're crisper, hotter, and skinnier but still analogous to the pepper you're more used to. Bigger ones can be roasted, but they're also great raw. It's a perfect variety for the just-getting-started hot pepper novice.

9. Poblano - Conspicuously larger that the rest of the peppers here, poblanos are the central ingredient in chile rellenos. Thick-skinned and only mildly spicy, they're also terrific when roasted. Left to mature fully and then dried, they're called Ancho chiles, a common ingredient in mole sauces.

Happily, most chilis can be easily swapped in and out of recipes. Get experimenting and find your favorites -- just keep some cooling milk or yogurt on hand to gulp down if you have too much.

Cindy M. September 16, 2014
1 & 2 are wrong, mixed up. Anaheim is the bigger red one, although usually harvested green, and cayenne the very small ones. I have harvested over 150 already of poblano, anaheim, numex big jim, and have bushes of cayenne and Thai chilies still to go!

BoulderGalinTokyo April 18, 2013
I espically loved your Good Striations- the tip and the joke.

Dr.Insomnia September 30, 2012
Too bad that you left out the New Mexico green chili. This pepper, once a relative of the Anaheim but now so fully bred into a variety of heat levels that leave it better regarded as a unique cultivar, is a staple, even ubiquitous and defining in New Mexico cuisine. It's on everything there, where common food items like chile cheese fries and chile dogs take on new life (and levels of heat).

The most famous variety, Hatch green chiles, out of Hatch, NM, have such an intense following that my local Whole Foods sells them by the case in season, over 1000 miles east of New Mexico.

It's definitely worth mentioning on a top ten list of peppers. Pro-tip: green chiles are almost always roasted, and the word chile does not refer to that meat stew in Texas, but rather an individual pepper or the resultant sauce made from the peppers. Hence, the variant chile cheese fries. And green chiles can be stuffed as rellenos, or put in just about every dish (in this house).

Nozlee S. October 1, 2012
This isn't a top ten list -- we featured every variety of pepper we could find at our local farmers' market on the day of the photoshoot! The New Mexico green chili is certainly an important one, but difficult to find locally in the New York area. Thanks for sharing your knowledge about it!

smslaw September 29, 2012
With our short growing season in Maine, I grow Hungarfian Hot Wax peppers every year. They reliably ripen to red, going through light green, yellow, and orange. A very pretty pepper, about as hot as Jalapeno.
I'd always wondered about the striations. Thanks.

Lost_in_NYC September 29, 2012
Love this story! Learned something new striations in peppers. I usually pass them up while shopping but not any more! Thank you :-)

Panfusine September 28, 2012
Question: How does one distinguish between a Habanero & scotch bonnet? they look so similar?

Nozlee S. September 28, 2012
That's a good question! They're both on the red-yellow spectrum, after all, but Scotch Bonnets are "squishier" and have more folds, and habaneros have a pointy tip at the very bottom.

Panfusine September 28, 2012
These down & dirty posts are a treat to read! Thank you Nozlee!

Nozlee S. September 28, 2012
Thank you so much! I enjoy writing them -- and once we run out of produce this winter, we'll be turning to cuts of meat, herbs, and other food items.