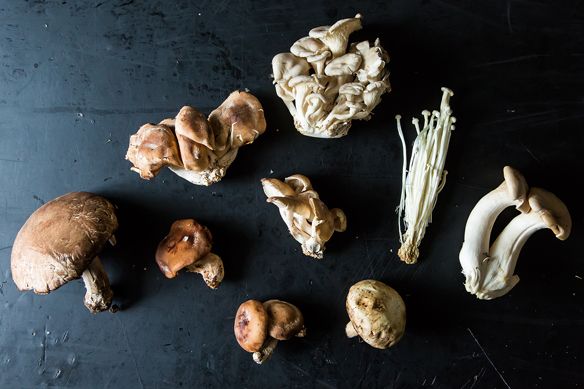 Mushrooms aren't vegetables at all -- they're fungi! More specifically, they're the fungus' spore-bearing fruit body, also called the sporocarp, which produces the spores that grow into more mushrooms. While many mushrooms are poisonous, hallucinogenic, or medicinal, the ones we'll be discussing today are all perfectly edible (also, delicious).

There are dozens of varieties of mushroom: chanterelle, lobster (which actually grow because of a parasite that lives on certain mushroom varieties!), porcini, hen of the woods, and of course, truffles. Here are a few of the most common varieties, easily found at your local farmers' market.

Interested in growing your own mushrooms? Take a pass on a walk in the woods -- believe me, almost every edible mushroom has a poisonous lookalike -- and try out these mushroom growing kits now in the Food52 Shop! 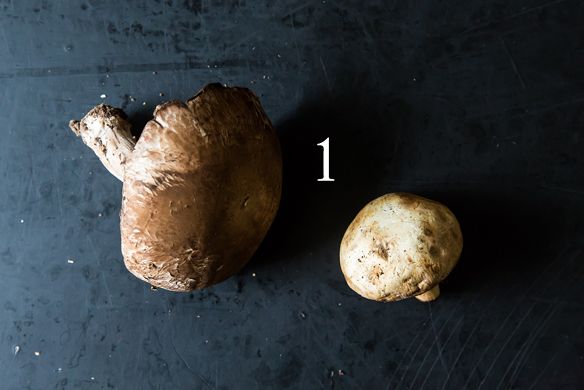 1. A Mushroom by Any Other Name: The most commonly available mushrooms are all of the species Agaricus bisporus. This includes white (also called button) mushrooms, criminis, and portobellos, which are fully matured Agaricus bisporus specimens. Easy to grow, dependable, and flavorful, they're the perfect go-to mushroom. A tip: criminis are just white mushrooms with slightly darker caps. Exchange them in your mushroom recipes at will! 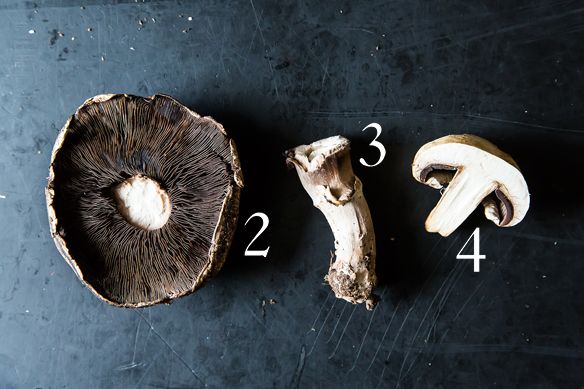 2. But I Thought Only Fish Had Gills: The mushroom's gills (scientifically called lamella) are how mushroom spores are dispersed. Because they're downward-facing and full of tiny cracks, they can often hold dirt. It's commonly accepted that mushrooms should never, ever get wet, lest they soak up water and turn to mush in the pan. Not so! While mushrooms shouldn't be outright soaked in water -- as you might with leeks, say, or spinach -- they can handily take "a shower, not a bath," as this piece from The Kitchn tells us. Dry them gently before using, and you'll never find a clod of dirt in your beef stew.

3. Stem of the Problem: Mushroom stems are edible, but especially on larger or older mushrooms they can be woody and tough. Don't toss them -- they'll add wonderful depth to your stocks and gravies.

4. Cross-Sectioning: Because of their high water content, it's good to expose as much of your mushrooms' surface area as possible when browning them. (And, of course, give them plenty of room in the pan, working in batches if you need to.) Once all that water has been released and evaporated, the mushrooms are left with concentrated flavor and a chewy, hearty texture. 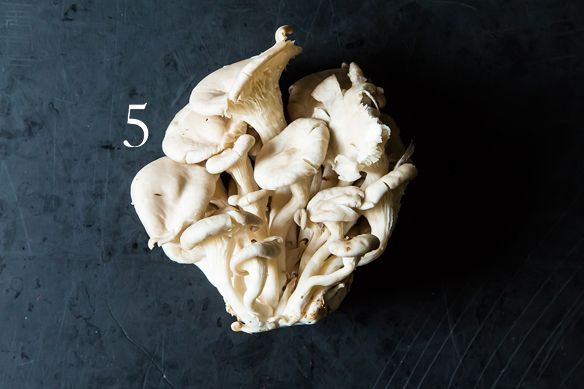 5. Oyster Mushrooms: Don't worry, these aren't so named because of how they taste (in fact, they have a light anise-y flavor), but rather because their caps bear a passing resemblance to bivalves! First popularized in Germany during World War I, oyster mushrooms are now grown around the world. They quickly become tough when mature, so look for younger fungi when purchasing them. And here's something unbelievable: oyster mushrooms are carnivorous! No, they don't prey on mammals, but they do kill and digest small worms. 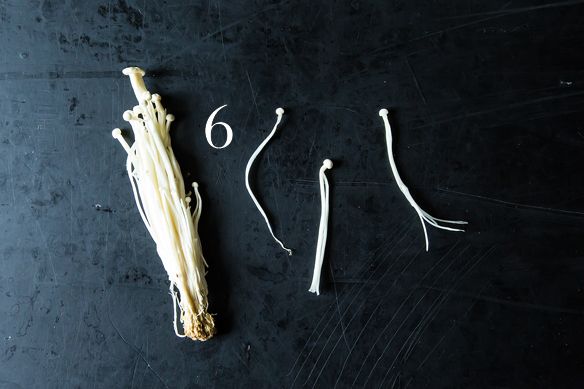 6. Enoki Mushrooms: Widely used in Chinese, Korean, and Japanese cuisine, enoki mushrooms take strength in numbers: they grow in packs, tightly bunched together. Pieced apart with your hands, they provide a pleasant, mild crunch to soups and salads. Almost all commercially available enoki mushrooms are white from being grown in the dark; wild varieties turn brown from exposure to the light. 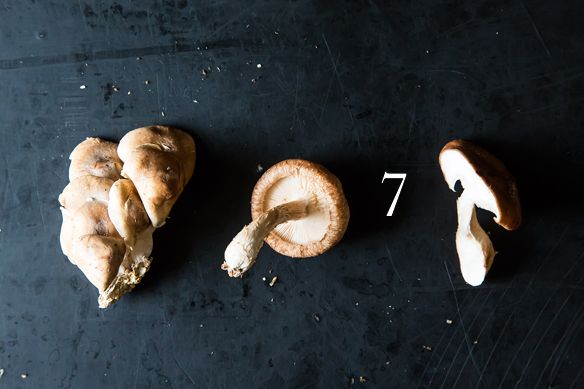 7. Shiitake Mushrooms: The first records of shiitake (so called because they grow in the Japanese shii tree) cultivation date back to China in 960 AD. No wonder they're so central to the recipes of East Asia! Extremely high in umami glutamates, shiitakes taste meaty, rich, and complex, making them perfect for everything from dashi broth to stir fries.

Shiitake stems are much tougher than their caps. If using fresh, chop them finely and continue with the recipe, but when using dried, go ahead and save them for making stock -- they'll be too tough to chew. 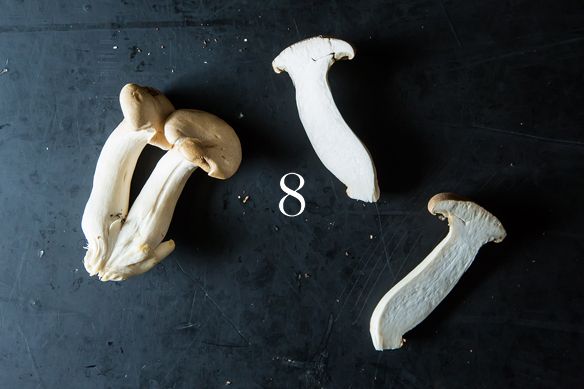 8. Trumpet Mushrooms: Trumpets are all stem, with small caps and gills. Distantly related to the oyster mushroom, they're native to the Mediterranean and are on the mild side of the mushroom spectrum. Next time you're grilling portobello caps, try tossing a few whole trumpets on the grill, too -- their hardier shape ensures that they won't shrink and burn, as more delicately-shaped mushrooms might.

While butter-sauteed mushrooms on toast can't really be beat, they're perfect in all kinds of recipes, from luxurious (and vegetarian) bourguignon to a cold salad with radishes. What's your favorite way to cook with mushrooms?

Panfusine November 4, 2012
Thanks for this piece. not too familiar with mushrooms although I Recently fell in love with shiitakes. One of my favorite way to cook mushrooms is a traditional Indian dish with cremini and green peas cooked in a ginger-garlic and onion gravy.

hardlikearmour November 3, 2012
Don't forget, not all mushrooms have gills. Chanterelles have wrinkles, but not true gills. Porcini have pores. Hedgehogs have teeth.

LLStone November 2, 2012
Has anyone cooked with a mushroom called "Chicken of the Wood" or "Chicken Mushroom" or the "sulfur mushroom"? I was given about 2 lbs., and I sauteed them and froze them. I want to use them - the guy who gave them to me said they are used in high-end restaurants, but I am not seeing much in the way of using them. Any suggestions? I do love mushrooms, and could probably throw them in a soup or quiche or something - just wondering if anybody uses these mushrooms for anything super or specific? Thanks.
Author Comment

Nozlee S. November 5, 2012
You can supposedly use them anywhere you'd use chicken! But when I ordered them once at Craft in New York City, they were served in all their glory: simply sauteed in lots of butter, to be eaten plain or with bread.