Today: How to add much-needed spark to your winter diet (and your Thanksgiving spread). 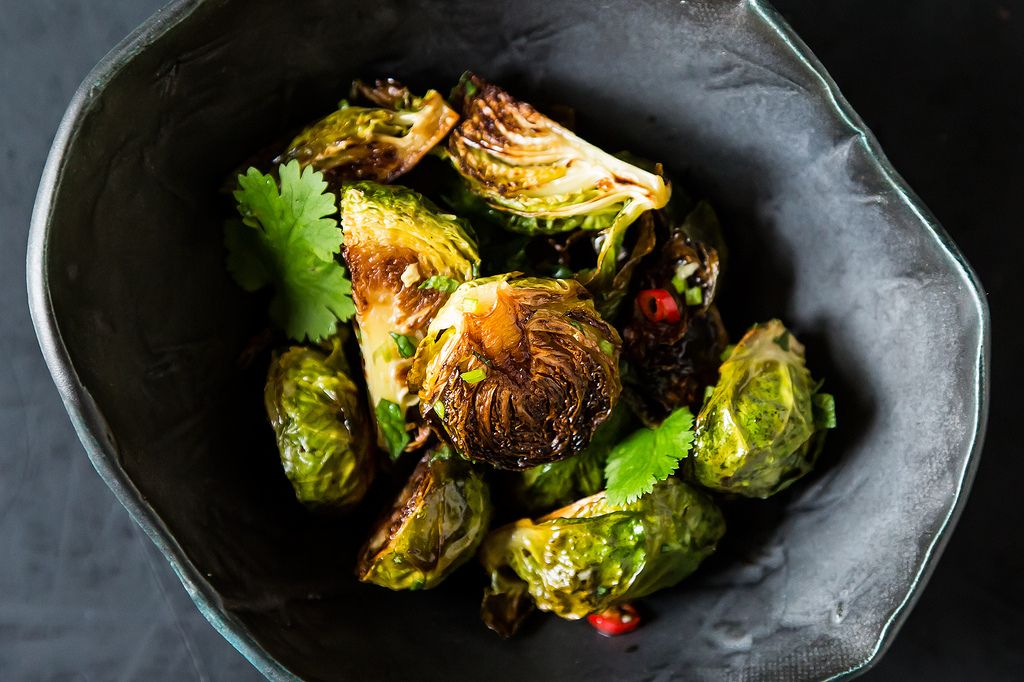 Thanksgiving calls for sparks of life -- the cranberry relish, the random bowls of olives, good wine. They propel you toward more helpings of the piles of food you've spent the day on, give life to the conversation, stave off the food coma.

This year, you can temper the platters of pale and soft from an unexpected place: the brussels sprouts. 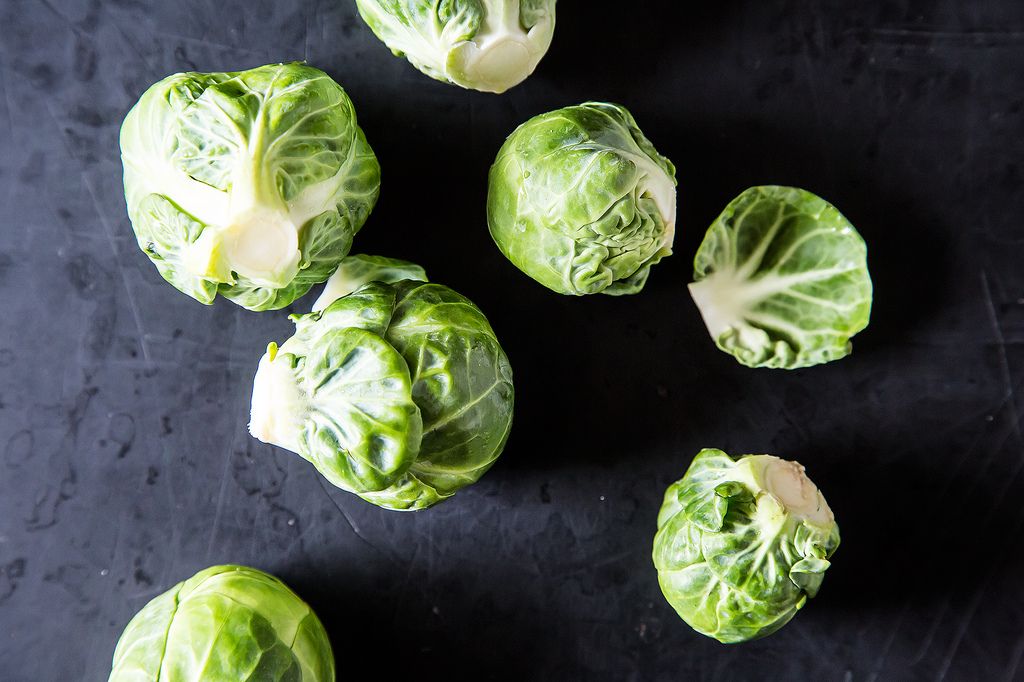 Even if we, as a people, have recovered from mushy sprout flashbacks, they're still often wrapped in butter or cream. Which is fine. But what happens if we shove them in a new direction? 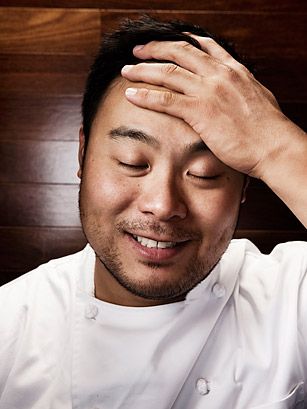 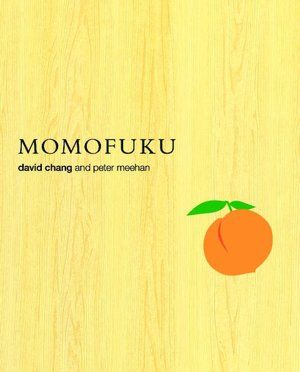 David Chang happens to be good at that sort of thing. With his revolutionary Momofuku family of restaurants and cookbook, he's taught us much about invention in the name of "deliciousness." Here, he takes two under-the-radar ingredients -- brussels sprouts and fish sauce -- and turns them into the big meal's sleeper hit. 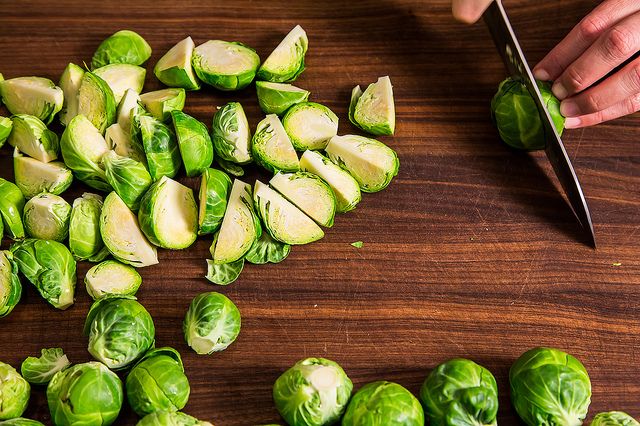 If you're nervous about fish sauce (or the people you're feeding will be), realize that, while it is nothing you should eat -- or, okay, smell -- by itself, like an undercurrent of anchovy or soy sauce, it can make magic. Especially when combined with flickers of garlic and chile and bursts of lime and rice vinegar. And cilantro stems (you'll use the leaves as garnish -- bonus genius points). 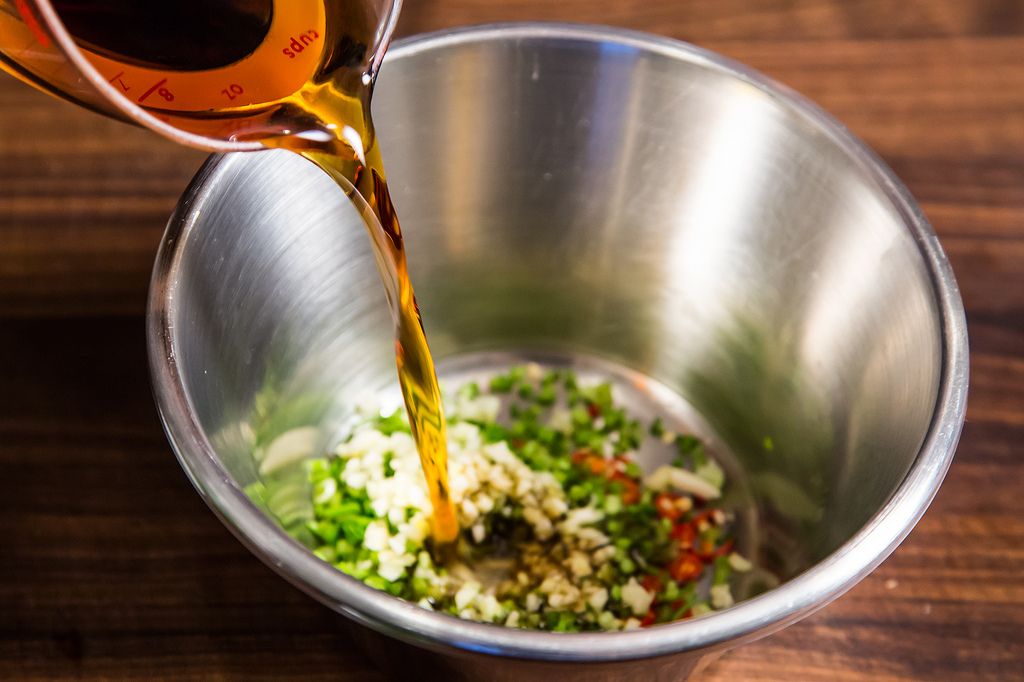 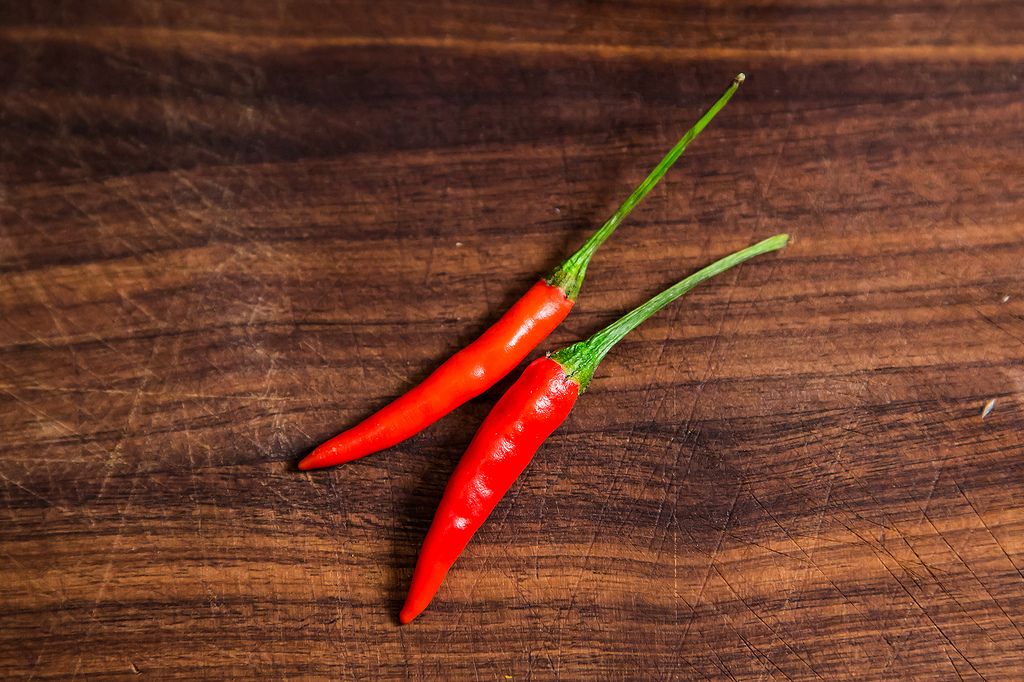 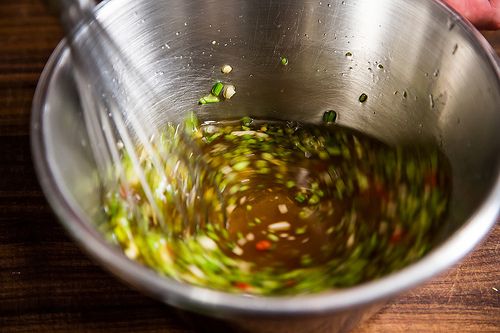 In fact, as China Millman-- food writer, former Pittsburgh Post-Gazette restaurant critic, and wife of talented Food52 Developer Michael Hoffman -- wrote to me, "The fish sauce vinaigrette is the genius part of this recipe. It's quite simple -- and it keeps for up to a week in the fridge. It is an incredible combination of salty, sweet, and sour, livening up everything it touches. I like this with brussels sprouts even more than bacon."

The other genius part: cooking the sprouts till they're crackly, with pretty brown surfaces and lots of crevices for the vinaigrette to seep in and bounce around. As Chang told GQ in 2009, he likes to get this going with the sprouts laid face-down in a skillet of sizzling oil before finishing them off in the oven. 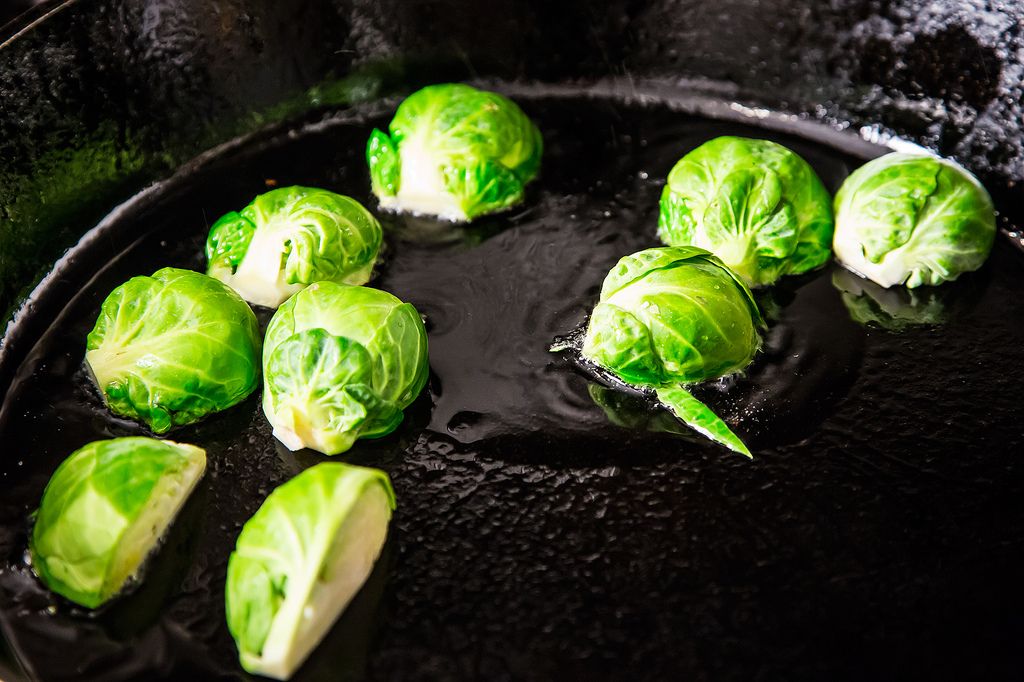 But when cooking for a crowd, spreading them on a couple of baking sheets in a screaming hot oven works well too. For Thanksgiving, you can do this ahead and warm them up later (or leave them room temp -- both are good). 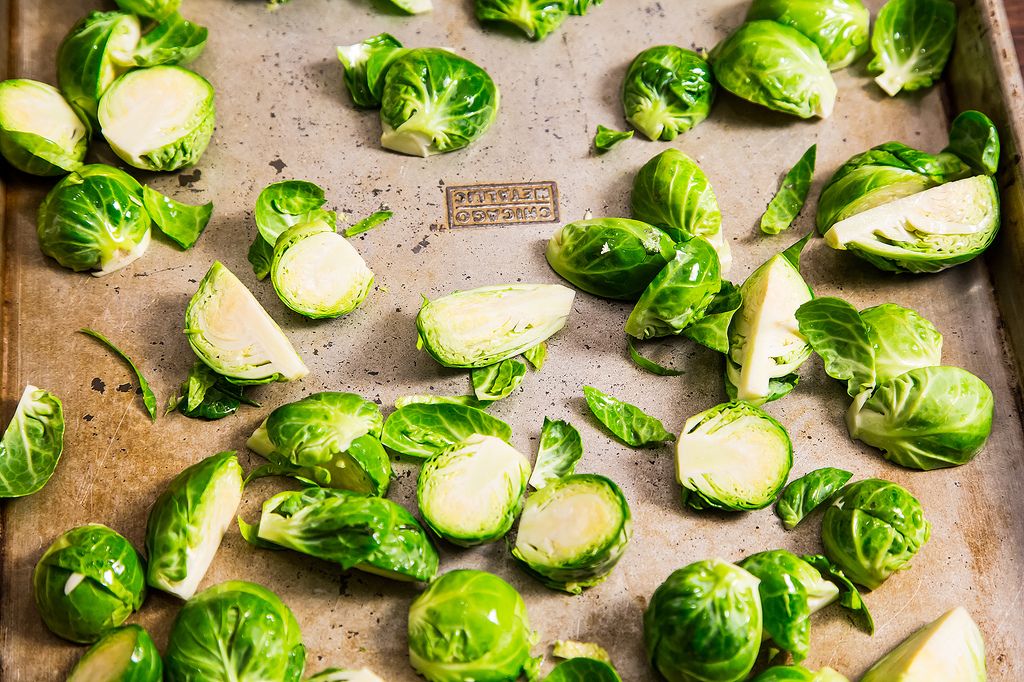 Or you can (carefully) deep-fry the sprouts, like Chang did when he introduced them at Momofuku Ssäm Bar. They will rattle your mind, in the way that well-fried things can. But a very hot oven and a not-stingy amount of oil will give you the same deeply browned exposed facades and rippling flyaway leaves. The insides will just be a little more recognizably vegetal, which, in many cases, can be a good thing. Like when you're surrounded by gravy. 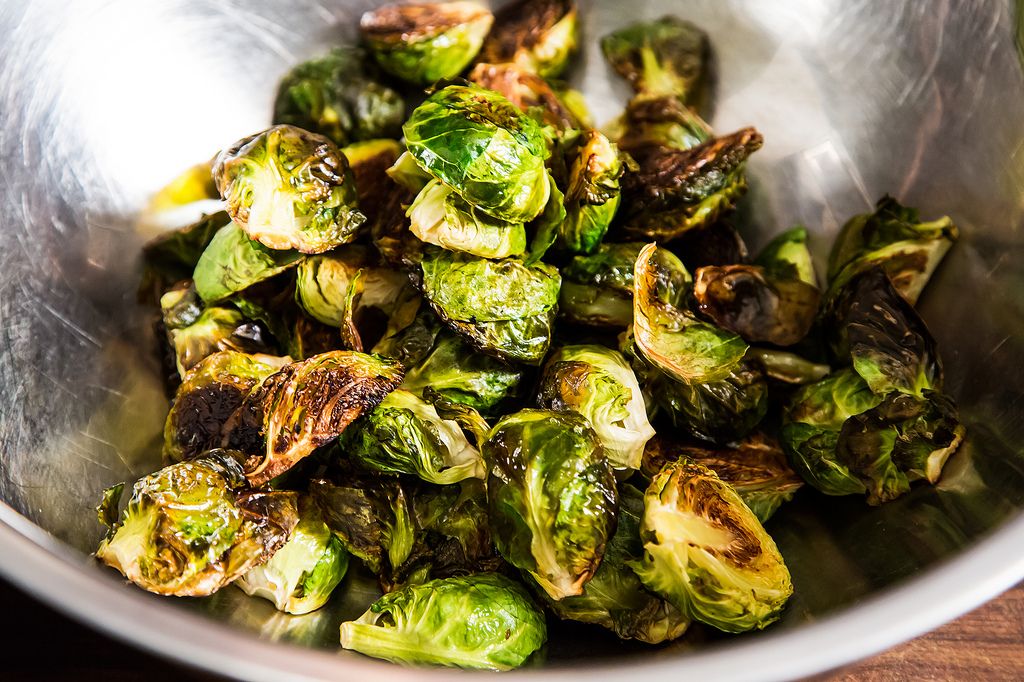 The original recipe includes some other fun doo dads -- fried cilantro leaves and spicy toasted puffed rice. If you want those, look here. I skip them.

Because, with a bowl of handsomely roasted sprouts, that vinaigrette, and a finishing blanket of fresh mint and cilantro -- any more excitement just wouldn't be fair to the sweet potatoes. 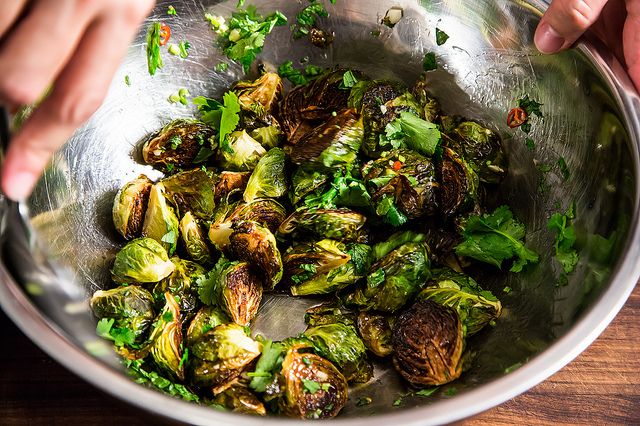 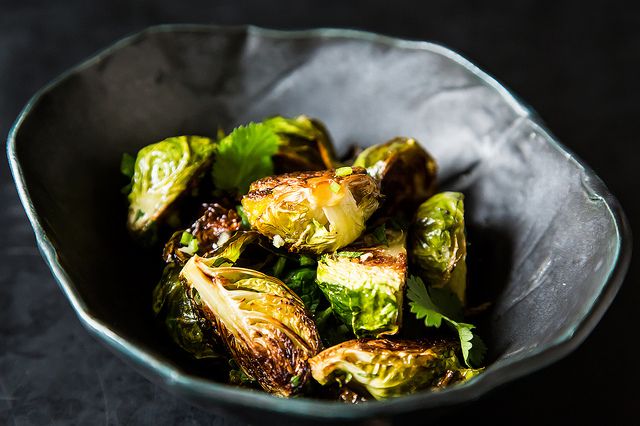 Photo of David Chang by TIME Magazine; all others by James Ransom

ANNEHOLMES November 9, 2016
Can you omit the sugar?

witloof September 6, 2016
I just made a batch and used it to dress a bowl of cucumbers and carrots. it was so delicious I sliced up another huge bowl and was too full to eat anything else for dinner! I didn't have any mint but will definitely try it that way next {probably tomorrow!}.

Maxwell J. February 22, 2014
i use the fish sauce vinaigrette on everything. i almost always have a quart of it on hand. it makes my otherwise boring dinner of rice a vegetable and meat very satisfying.double the recipe! you wont regret it

Kristen M. November 28, 2013
Sure thing (you could consider mincing them instead of slicing thinly, so people don't run into big bites of chile).

Sisi V. December 20, 2012
Must try this. I'm allergic to cilantro so I'll be leaving that out. Any opinions on whether I should substitute parsley in this dish?
Author Comment

Kristen M. December 20, 2012
I wouldn't, but with the mint and all the flavors in the vinaigrette, I don't think you'll miss it too much. Chives could be nice though.

Jim L. December 8, 2012
We made it. We loved it. Funny how everyone seems to be trying the same stuff at the same time... Nice.

Layne G. November 11, 2012
What a fun coincidence. I just got back from a weekend in NYC to read your latest post. (I am brand new to your newsletter and love it!) We ate at Momofuku's noodle bar last night and had their delicious brussel sprouts. The dish is everything you say it is. We also loved the Pork buns! I wanted to mention that at a Cambodian cooking class last year at the Elephant Walk restaurant in Boston (there are two, one in Cambridge) the head chef and teacher Longteinee De Monteiro said they only use Three Crabs fish sauce. I switched and never looked back.

creamtea November 9, 2012
For the admittedly rare kosher cook among us, would a bit of mashed anchovy melted in sizzling oil work in place of the fish sauce? Or do I aim for the vegan option described below?
Author Comment

Kristen M. November 9, 2012
Are you looking for a certified kosher brand of fish sauce, or are you simply looking for one without shellfish? Red Boat is made from only anchovies and salt, for example: http://redboatfishsauce.com/fish_sauce.html

Fairmount_market November 7, 2012
Yay! I was just contemplating how to cook the brussel sprouts I picked up at the farmers market this weekend. Thanks for the inspiration.

Joy H. November 7, 2012
I made a simplified version of these with what I had on hand (no cilantro, mint or chiles), and they were still really delicious! http://the-cooking-of-joy.blogspot.com/2010/02/faux-momofuku-brussel-sprouts.html
Author Comment

witloof November 7, 2012
Who's got a favorite fish sauce?

AntoniaJames November 7, 2012
Red Boat is the best. Absolutely, hands down, the best, ever. (And I've tried them all. You wouldn't believe how fast I go through that stuff.) ;o)

witloof November 7, 2012
Can someone please recommend a favorite fish sauce? I had a bottle of Tiparos and thought it was nasty. I don't find the food in Thai or Vietnamese restaurants nasty, so it must be Tiparos. I live in NYC and can easily go to an ethnic neighborhood to purchase the good stuff if necessary.

Carol M. November 30, 2012
I heartily second the comment on Red Boat being the best. After it was recommended to us, we did some blind taste tests with Red Boat and two other widely available kinds. Hands down, the Red Boat was much, much more flavorful.

Lost_in_NYC November 7, 2012
For the vegetarians out there, could you substitute soy sauce for the fish sauce and still follow the recipe as is?

Joy H. November 7, 2012
I haven't tried it yet, but I feel like soy sauce might be too strong for the dressing. Maybe try this recipe for vegan fish sauce? http://www.thekitchn.com/recipe-vegan-fish-sauce-130535

AntoniaJames November 7, 2012
Balsamic vinegar + tamari is a good substitute. Use less of it. I'd probably add a bit more lime juice, too. ;o)
Author Comment

Kristen M. November 7, 2012
Such helpful suggestions! Lost_in_NYC, I think if you wanted to try this recipe and only had access to soy sauce, you could try it and just go very easy on the soy, adjusting everything to taste. It wouldn't be the same, but it would probably still be good.

Lauren February 4, 2018
what did you end up doing? finding myself in the same conundrum cooking for a vegetarian guest

AntoniaJames November 7, 2012
Excellent recipe!! Made these tonight; served with a simplified version of this: http://food52.com/recipes/14262_green_thai_bowl_with_coconut_poached_coho_salmonwhich I highly recommend, by the way. The cooking method alone, apart from the sauce, is brilliant. ;o)

drbabs November 7, 2012
I'm in charge of brussels sprouts this Thanksgiving, and I have been looking for a great recipe. Thank you.
Author Comment

Kristen M. November 7, 2012
You're very welcome! I hope you (and everyone else, but mostly you) like it.