Cherries, whether sweet or sour, are as cute as they are versatile. They play well with booze (Merrill likes to soak them in liqueur), they skew savory when paired with duck breast, and for hot summer days, nothing is better than a cherry snow cone. Today we're discussing cherries, stem to pit -- everyone's favorite tiny stone fruit.

There are many varieties of cherries, but they all fall under two basic groups: sweet cherries, which are the most readilly available, and sour cherries, which usually require cooking (or soaking in booze) to break down their juices. Both are perfect for eating on their own -- although be ready to pucker up a bit if you're snacking on sour cherries -- but sweet cherries are more generally used in dessert recipes while their sour cousins are used in savory ones. Sour cherries are also much more fragile when ripe, which is why they're more difficult to find -- if you can get your hands on them, fresh or frozen, snap them up.

The season for cherries is early summer, from early July to mid-July. Sweet cherries reach maturity first, with sour varieties appearing a few weeks later. Cherries take very well to preserving and freezing, so there's no reason to go all winter without them! 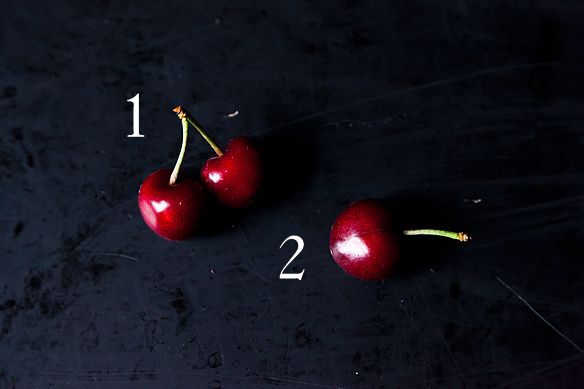 1. When you think of cherries you imagine them in pairs, don't you? It's also common to find cherries grouped in quadruplets on a single bunch of stems. This happens because of the way cherry flowers bloom -- several pink blossoms grow from a single focal point, and when those flowers wilt and become fruit, the resultant cherries are connected, too. It's smart to keep cherries attached to their stems whenever possible, as they will stay fresh for much longer. And when you're harvesting the fruits, harvest the cherries at the stem (no higher!) or you risk next year's buds snapping off along with them.

2. Unlike other fruits and vegetables, cherries stop ripening once they've been picked. If a cherry is hard, it's unripe and won't taste as good -- they should be soft to the touch, but not mushy. 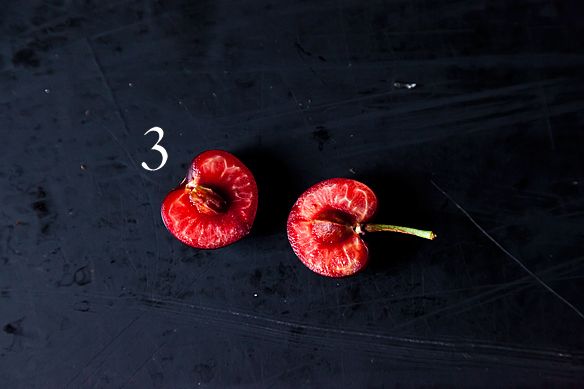 3. When a cherry is ready to be picked, its pit loosens and is much more easily removed. You can pit with a cherry pitter, a sharp paring knife, or, as Amanda does, with a meat pounder.

Share the bounty -- here are some of our favorite cherry recipes. How do you cook and preserve cherries?

landseergirl July 22, 2012
How do you freeze cherries, do they ned to be pitted? Is there a better way to preserve them for winter delight?
Author Comment

Nozlee S. July 22, 2012
It's definitely best to pit them before freezing -- otherwise, you'll have to fully defrost them before you're able to pit them afterward. I would pit the fruit, lay them close but just barely not touching on a baking sheet in the freezer until they are solid, and then store them in a tightly-wrapped bag in the freezer.

AntoniaJames July 22, 2012
I usually pit and put them into sterilized jars; then, I cover the cherries with brandy and stick in a vanilla bean. Six or eight months later, the cherries plus syrup are perfect over cake or ice cream. I've been known on occasion to eat them right from the jar. The soaking liquid make the nicest base for a light spritzer come springtime. And the brandy and cherry flavored vanilla bean makes the best vanilla sugar. ;o)

Simcha July 21, 2012
Cherries are one of my all-time favorite fruits. My grandmother used to bring a dessert over to our house nearly every weekend. She was born in Coratia and as a child of well-to-do parents, spent time very year in Vienna. One of my favorite desserts she made with sour cherries was a simple cake called Gleichgewicht. A tender pound cake baked in a square pan with sour cherries baked in. My other favorite is pulled strudel with sour cherry and ground walnut filling. Just the best! By the way, sour cherries pair well with a hint of clove in any pie or tart filling.

Hilarybee July 20, 2012
I think sour cherries are better in desserts-- I like their tartness, when combined with sweet pastry . Especially in crumb cake, or anything else containing cinnamon.

AntoniaJames July 20, 2012
I made a cherry chutney a few weeks ago. I generally eat them out of hand with joy and abandon while they're in season, but don't do much in the way of preserving, (i) due to simple laziness (Pitting them is so much work!) and (ii) I really like some seasonal items to be truly that. I.e., if you don't preserve a fruit or vegetable, it's just that much more wonderful and exciting when you have it fresh in the summer. ;o)