Celeriac -- also just called celery root -- has got to be the craggiest, least lovable plant there is. Covered in hairy roots and clods of dirt, it's like the hobbit of the vegetable world. Give it some time, though, and it'll pay you back: celeriac has all the mellow, vegetal flavor of celery and none of the stringy wateriness. 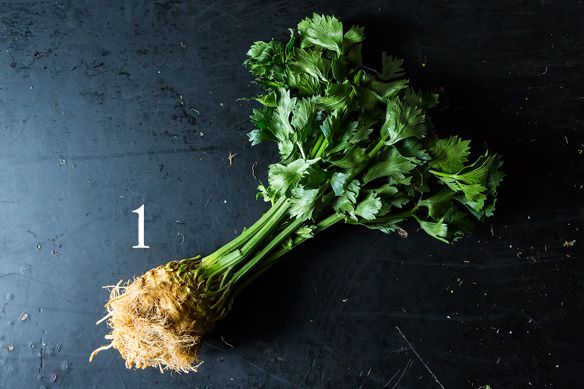 1. A Faux Root: Celery "root" is a misnomer -- it's actually a bulbous hypocotyl, which is the name for the area of a plant between its stem and roots. (In celeriac's case, the true roots are those feathery hairs all over its surface.) All varieties of celery will produce these bulbs when left to grow for long enough, but the celeriac you find at market is particularly chosen for its less prominent stalks and well-developed hypocotyl. 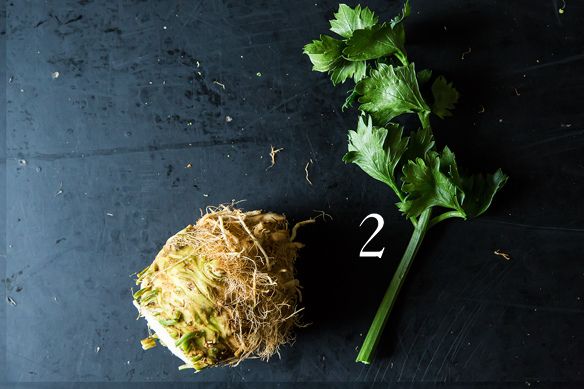 2. The Stalks: Because the plants are grown for what's underneath the soil, not above it, the stalks of celeriac bulbs are stringy and tough. Instead, skip ants on a log and use them to flavor stock, where they make a perfect stand-in for conventional celery in a mirepoix. 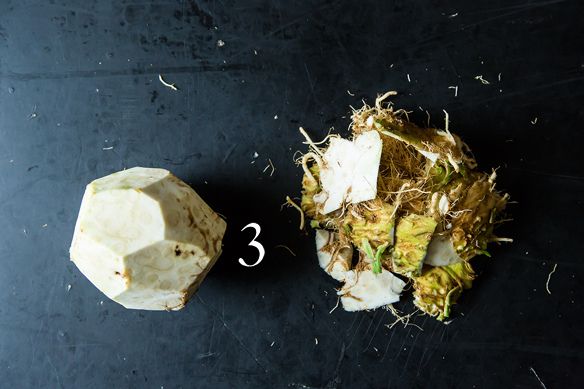 3. Celeriac, Unmasked: When it comes to celeriac, you have to be ruthless -- using a sharp knife and then a vegetable peeler, hack away at that tough skin until its pretty white flesh emerges. (You can even watch A&M demonstrate how on video!)

Like many of its root vegetable brethren, celeriac is wonderful both roasted and pureed. And of course there's the classic French céleri rémoulade, in which thinly sliced raw celeriac is tossed in best-quality aioli. What's your favorite way to cook with celeriac?

I like to use both the bulb and the greens in place of celery in winter braises, soups, stews and suchlike. I also like to roast the bulb with root veggies. I think it's especially nice with rutabaga or fennel bulbs.

For me, it's a quintessential winter vegetable.

BavarianCook November 26, 2012
I boil the whole root unpeeled for about 15-20 min, then peel it, and use the mandoline to cut it into thin strips. Make a dressing with sugar, vinegar and a little oil and it turns into a lovely pickled sort of salad that pairs well with stews. Also a nice addition to an assorted salad plate - pair that one with carrot salad, an oil & vinegar based potato salad and perhaps some pickled beets on a bed of leafy greens. Delicious and looks great.

MsDivinaLoca November 26, 2012
I make a celery root, leek (or spring onion) and roasted garlic mash that is just as fluffy as mashed potatoes (the secret is to squeeze the liquid out of the cooked celery root)

JohnnyG November 26, 2012
Roast it off with other root vegetables like carrots, parsnips, potatoes for a side or boil it down with potatoes and food mill it into the best mashed potatoes you've ever tasted!

jamesgang November 25, 2012
Super easy to grow in the fall garden--too hot for a summer harvest at least it is here in NE Okla.I start them in the GH and move small plants to the garden- I like to serve celery root with Yukons as a puree' with a real savory meat dish like Roast thighs with olives and dired toms---beef short ribs go well also.

Deea November 25, 2012
Celeriac and lentils with hazelnuts and mint by Yotam Ottlenghi in Plenty is a winner!

ryanm November 25, 2012
Daniel Boulud's celeriac, chestnut, and apple soup is fantastic. Paired with a nice German Riesling, it's the first course for many of my winter dinner parties.

arzehe November 23, 2012
We just used this in class about two weeks ago. The recipe was for a parsnip and potatoe puree but we added the celeriac to it and it was absolutely delicious.

walkie74 November 23, 2012
I wonder if minced celeriac could sub for the celery in my dressing... I can't stand chunks of celery, but celeriac might work better...