Every day till Christmas, we're bringing you 12 Days of Baking: 12 all-new baking recipes to lift holiday spirits -- from breakfast pastries to dinner rolls, and all the desserts you can handle.

Today: The chocolate cake you'll want on hand all through the holidays. 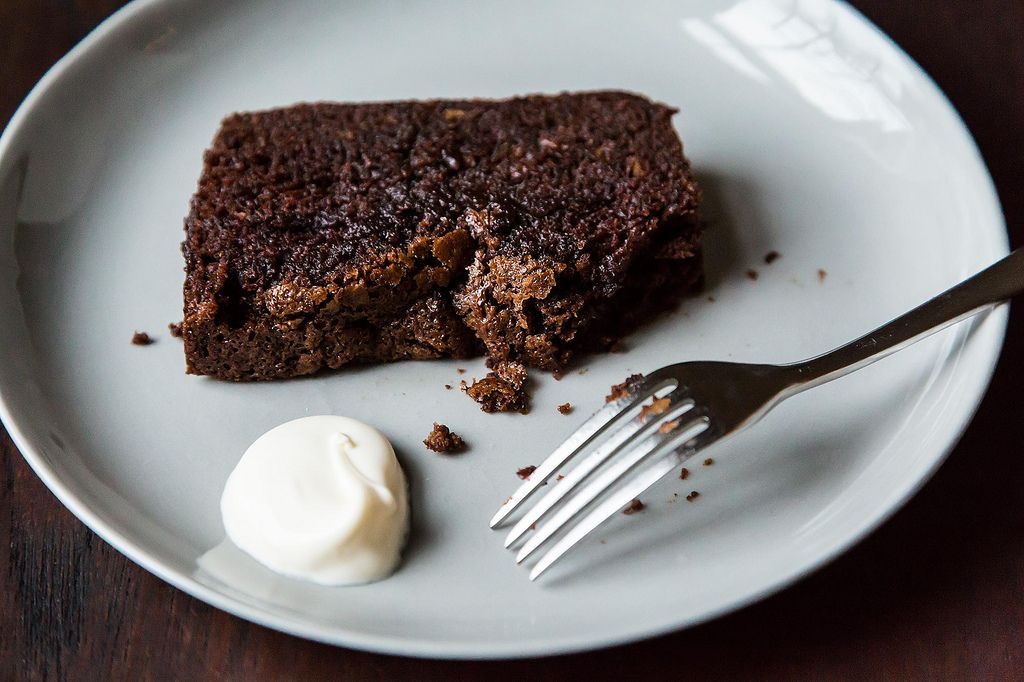 As we've discussed, the holidays call for cakes to be lying "around" -- for the roaming family members who must be kept happy and quiet between mealtimes; for the neighbors who swoop in unannounced; for you.

You might think a colorful stollen or musky gingerbread would be appropriate as Christmas creeps closer, but let's be real: chocolate is what the people want. And it's definitely what you want. 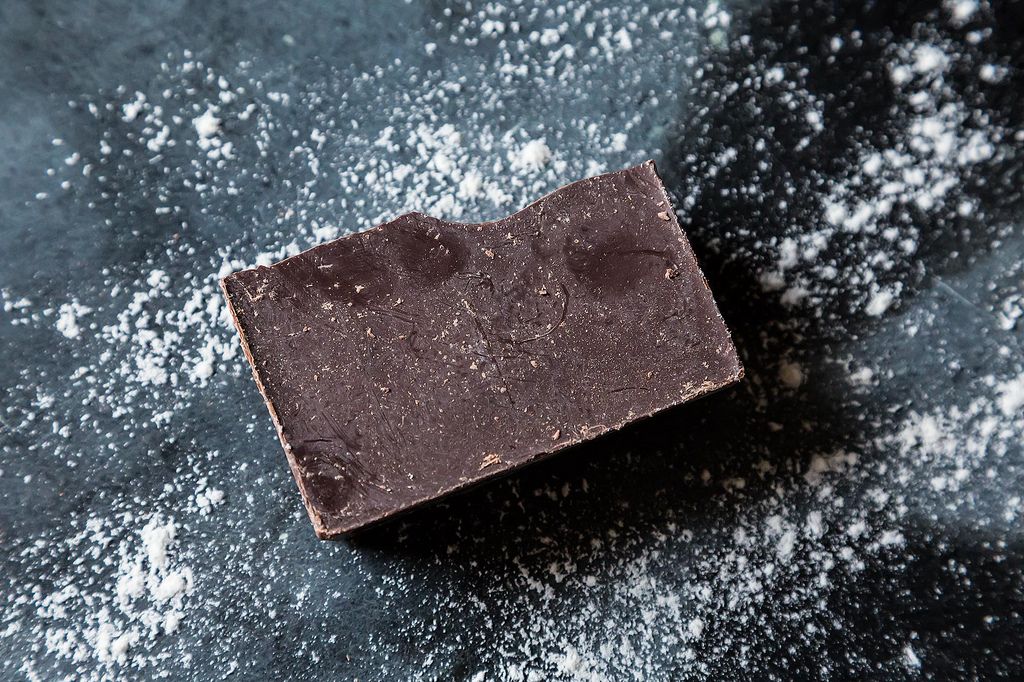 More specifically, what you want is Nigella Lawson's Dense Chocolate Loaf Cake. It's not a layer cake nor some molten lava thing -- it's a chocolate cake that's full of nuance and personality, damp and pudding-like within, with caramelly crisp edges. It isn't quite like anything else.

Lawson explains that, when developing the recipes for How to Be A Domestic Goddess, "I remember very strongly wanting to create what we call a loaf cake -- and what is generally called a pound cake Stateside -- that had a richness and squidginess of texture that this form of cake normally doesn't major in." 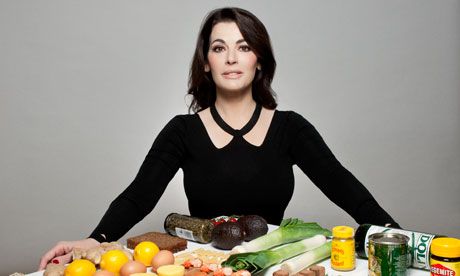 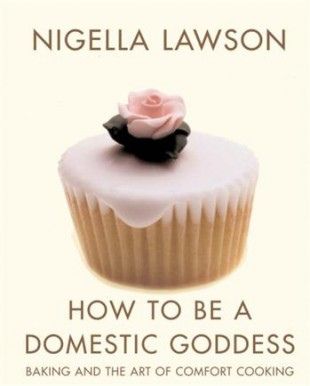 Where most loaf cakes are domed, sturdy, and evenly crumbed, this one is slumped and definitively squidgy (from the British, meaning "soft, spongy, and moist", not the American "unpleasantly damp; clammy" -- I think we've lost our way on this one).

So what is it that makes it so squidgy? First of all, a generous amount of dark brown sugar instead of white, which arms the cake with loads of moisture. Lawson adds, "In Britain we make it even treaclier by using dark muscovado sugar." (Treaclier!) 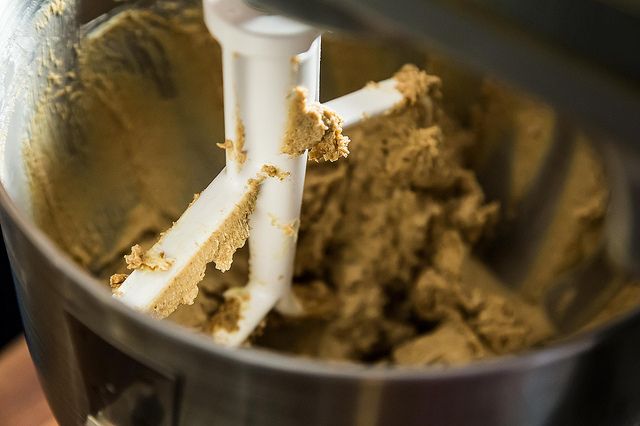 There is also the rather unusual step of starting with creamed soft butter and brown sugar and ending with spoonfuls of boiling water interspersed with leavened flour, leaving a surprisingly runny batter. It is this creaming and partially melting process that makes the final product resemble a cake, a steamed pudding, and a fudgy brownie all at once. 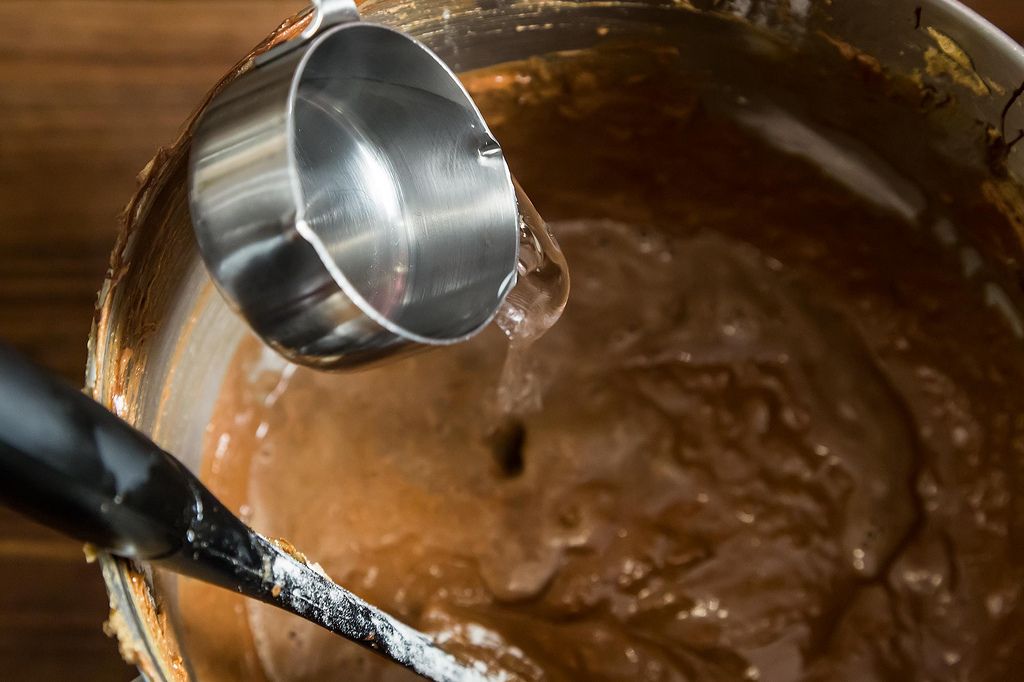 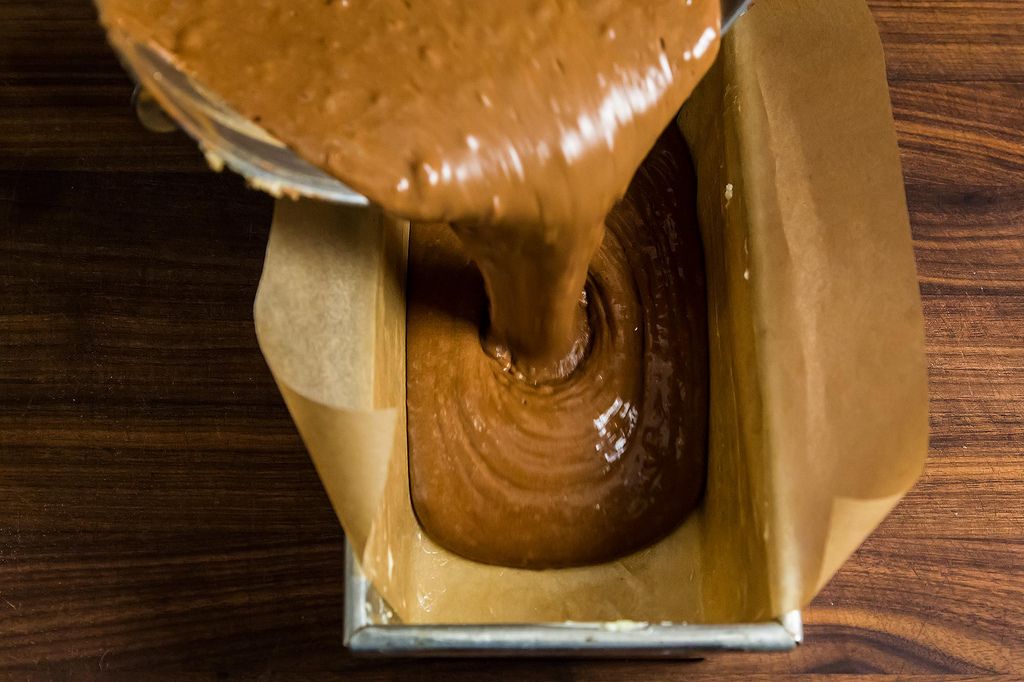 It also causes this cake to collapse in a slightly different way every time you bake it. Embrace it: it's this collapse gives the cake its glorious denseness. If you're concerned by the looks of it (Heidi Swanson nicknamed her spelt-based version Chocolate Ugly Cake), you can distract with crème fraîche, whipped cream, or cold cream cheese, the way Lawson likes it. 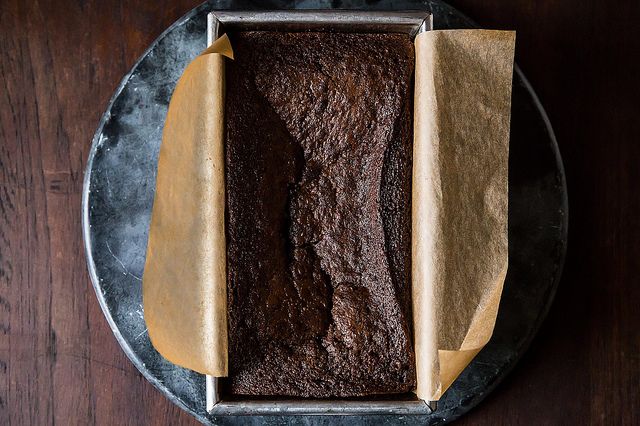 But really, just tell any doubters that Nigella Lawson, Domestic Goddess, says it's meant to look like that -- "This is the way of the loaf," she croons -- then feed them a slice, and see if you hear another peep out of them.

Recipe adapted very slightly from How to Be A Domestic Goddess (Hyperion, 2005) 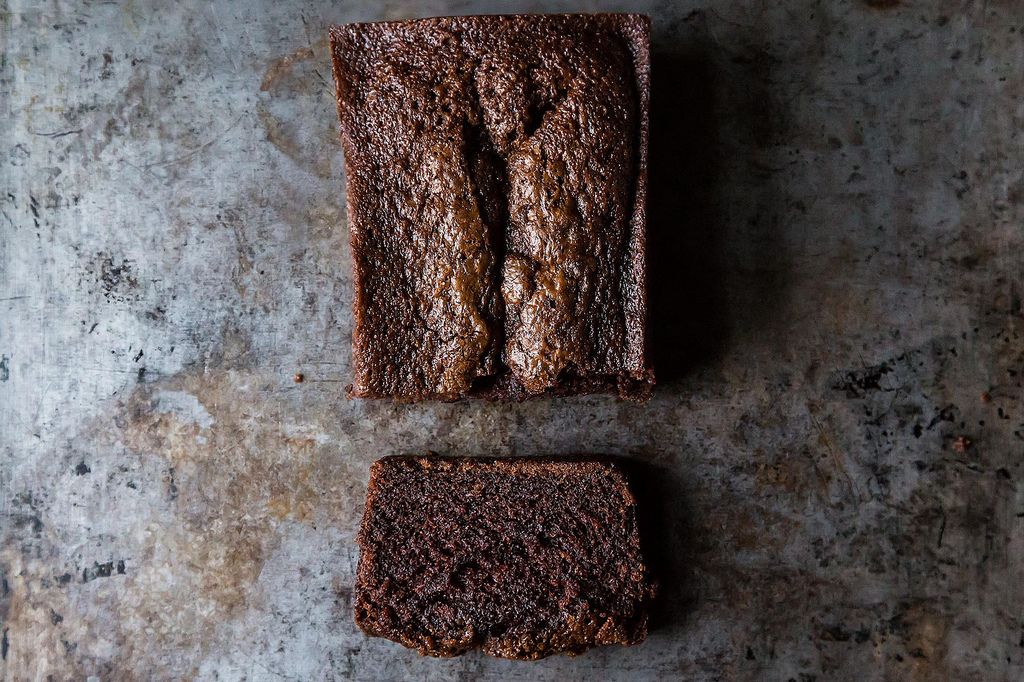 Kitspy February 1, 2016
This cake is so good. I'm eating it now. Dense is the right way to describe it, in a very good, very soft way. I made it yesterday. It is still great the day you make it, but the chocolate flavor is a bit stronger the second day. I took the suggestion of substituting 1/3 c of the flour for cocoa, and because I didn't have any parchment to line the pan, I buttered it well and dusted it with cocoa. It de-panned just fine. I also used a 10" x 6" pan and all the batter fit with the required 1" of space at the top. I meant to add salt, but I forgot because it was late, and I just wanted cake ASAP. I will probably do it next time, but regret nothing about this cake.

Fabiola F. November 13, 2015
What can I substitute the butter for. My daughter is allergic to dairy, but she loves chocolate. I am always looking for diary free desserts, specially chocolate one! Thank you

Kat December 4, 2014
I've made this cake on numerous occasions to family and friends and it is a clear favourite amongst many. The domestic goddess does it again.

vbak April 17, 2014
I have made this cake several times, and everyone loved it. I make a chocolate mint ganache to pour over it. Fabulous!

samanthaalison February 15, 2014
I loved the moistness, but I'd definitely tweak next time. I think using unsweetened chocolate, and a little more than called for, would improve it. I'd also add a pinch of salt.

AppleA August 29, 2013
I made this cake yesterday--first of all, the estimated baking time is too long. Second, who makes a cake batter without salt and who makes a chocolate cake without coffee or espresso? Weird. This just confirms I am not in love with Nigella Lawson recipes. I even added cocoa powder because I felt like the cake was not chocolatey enough when tasting the batter while mixing. The cake was tender, but actually fell apart quite easily as opposed to staying in slices. Maybe just not my bag. Will try to find a better recipe for my chocolate fix.

chankari February 3, 2013
I made this cake yesterday and had my first taste today. It's not a super chocolate-y cake, but it is so very good. I made it according the instructions except I used salted butter and muscovado sugar. I was a bit worried because of the comments and fretted about whether I should add coffee. But seeing that it was -12 out and snowing, I used what I had on hand (i.e. water). The cake came out beautifully - and the texture was the best part - lighter than a brownie, but moist like a cake. I think I over baked it a bit. My friend commented that the gooey slightly under-baked parts were the best (I added about 6-7 minutes because my skewer kept coming out totally wet, I would stick with the recommended baking time). Just as a side note, I packed my sugar (not super packed, but I gave it a nice firm push) and used 71% chocolate. Serve it with slightly sweetened whipped cream and some preserves (blackcurrant) leftover from the cheese course. Definitely worthy of the genius recipe title!

sffoodie52 January 21, 2013
I made this cake for the first time yesterday (my first Nigella Lawson recipe), and I must say I was skeptical about how it would turn out. The hot water thing made me nervous but I persevered. And, voila, a delicious cake, just as described! One thing I was unsure about: did you all "pack" your brown sugar like most baking recipes say with brown sugar? I wasn't sure, so I packed the first cup but didn't with the remaining 2/3 cup. The cake wasn't overly sweet (which was fine), so I will try packing all the sugar next time. Oh, I used 72% dark chocolate. Very good. Love the Genius Recipes Feature! Thank you.

Jukesgrrl January 2, 2013
I made the recipe exactly as written, as I always do on a first-go. I, too, was puzzled by the lack of salt, but I didn't miss it afterward. I made this for my brother's birthday and after it sat around waiting for a day, I was troubled by the modestly of its appearance. It didn't LOOK like a birthday cake. So I made a quick trip to the local Baskin-Robbins for a quart of my bro's livelong favorite ice cream, Gold Medal Ribbon (yeah, I know). To look festive, I put the cake on a rectangular platter, added a row of tall candles to the top, and piped some whipped cream around the base. After the birthday song, I put a slice of cake on each plate and added a scoop of the ice cream. The family acted as if I passed around plates of diamonds. Everyone loved the cake and it turned out to be sturdy enough to hold up to a utilitarian ice cream, as traditional birthday cakes often aren't. And since the cake didn't have icing, the entire effect wasn't overly sweet, but even the younger guests loved it. I had sliced off the ends of the cake before serving and kept them aside to try later. In the fuss of Christmas, I forgot all about the leftover and didn't get around to eating it until SIX days later. It tasted exactly the same as it did as a day-old cake, so the claims of moistness are not overrated. I'll make this again. If someone wants a slightly more elegant cake and ice cream effect, you might try a scoop of top-quality vanilla and drizzle the entire thing with caramel sauce. Thanks, Nigella and Food 52.

_alyssa December 26, 2012
I made this and it was *almost* perfect. Did anyone else miss the salt? Adding it next time, or maybe ill just use salted butter.

fiveandspice December 26, 2012
I doubled the chocolate...and found my platonic ideal for cake. Perfection!

Loving C. December 25, 2012
As a bartender I always try to find a way of adding some form of beverage to whatever I make, be it boozie or none, I steeped two earl grey tea bags in the hot water to add that lovely bergamot scent, its always done me proud in chocolate truffles so I figured why not give it a whirl. Its tasty and Nigella is my hero, am trying jasmine green tea or instant espresso with cardamom next time.

darksideofthespoon December 23, 2012
I'm 100% sure your loaf turned out that way because of the milk fat. I've used Valrhona LOTS and have seen that happen when a lower % chocolate was used. Trays of brownies turning into expensive greasy mush is heartbreaking. Their 72% chocolate is my chocolate go to for baking.

srcerer December 23, 2012
I am curious about what chocolate and butter people used. I did triple the chocolate using 6oz Valrhona 55% Equitoriale and 6oz Valrhona 64% Manjari. I also used Plugra because it was all I got. Needless to say I had a volcanic eruption - I'm sure it had to do with the high butter fat. (It could be I had to cream the butter/sugar longer so it didn't break as much.) I ended up baking it longer so it would solidify. Although the appearance and structure didn't hold up as nice, it tastes great. And is made even better with the tang of cream cheese. I was surprised there was no salt added and ended up sprinkling some good finishing salt on it . Lovely. I will try this again with different butter and possibly different/less chocolate and am curious what others are using.

Marian B. December 22, 2012
I am making this tonight in anticipation of my parents' arrival tomorrow. i cannot wait to try it!

barr December 17, 2012
I have made this many, many times and it is FANTASTIC. The best chocolate flavor. Dense and wonderful. One of our family faves.