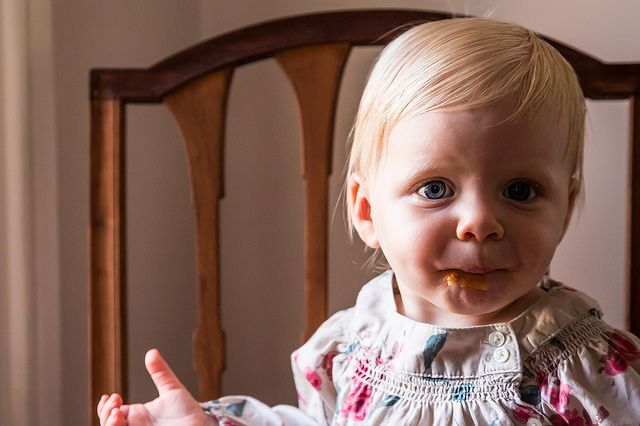 I don't know why, but it came as a surprise when Clara tried beans for the first time and liked them. I didn't grow up all that familiar with the legume family -- except for baked beans, which we had nearly once a week at school -- so maybe I somehow intuited that beans are not for children. Not so.

About a month ago, I spied a bag of plump cranberry beans at my favorite local grocer. Seduced as always by their pale pink, gently speckled bellies, I tossed them into my basket and went home to make a pot of pasta e fagioli. 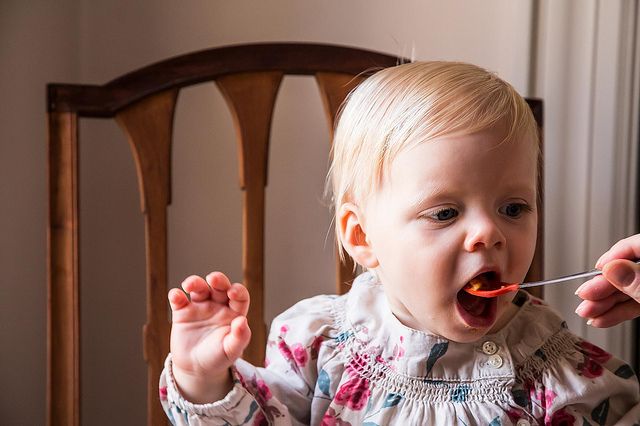 A few days later, low on other options, I gave Clara some for lunch, smashing the firmer beans with the back of a spoon and stirring them into the soup. I wasn't overly optimistic, but she gulped down mouthful after mouthful, even chewing up and swallowing the beans I had left whole. She ate an even larger portion that night at dinner.

Since then, I have made a pot of bean soup every week, and Clara hasn't tired of it yet. A couple of weeks ago, I found some beautiful little white beans at the same grocer and made a simpler, more tomatoey version, without bread to thicken the soup and without the pasta (you can always throw some in later if you like). Make a big batch over the weekend, and it will see you -- and your baby -- through several meals. 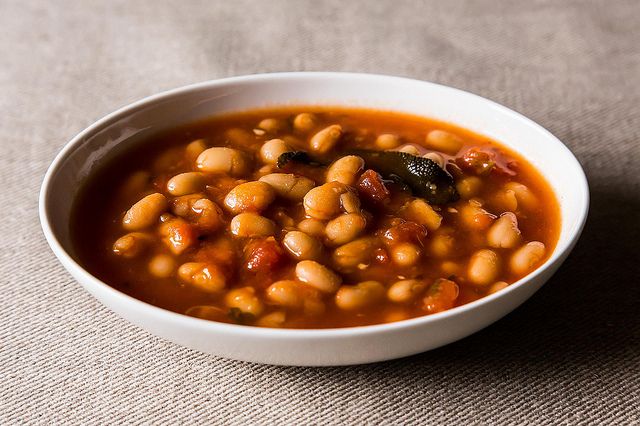 Emily L. January 2, 2013
Pomi tomatoes ... is that the brand that comes in boxes?
Author Comment

witloof January 2, 2013
I thought that beans were the nasty baked kind from a can when I was a kid. I never bothered to learn to cook them until I stopped eating meat a few years ago and started seeing beautiful heirloom beans at the greenmarket. Now I am always soaking or simmering a batch! They are just delicious. My favorite way to eat them is mixed with a lot of onions and garlic, freshly chopped parsley, bread crumbs, and what Tamar Adler calls "an immoderate, Tuscan amount of olive oil" drizzled on top. So good!

Elycooks January 1, 2013
My first memories of legumes is steaming bowls of lentil soup with coins of hot dogs floating on the top. Still love it.

HollySasha January 1, 2013
I made this tonight - honestly I was skeptical because it seemed too simple but it was delicious and ridiculously easy to make. I had a rich chicken stock on hand which I think is important. I simmered it longer than you suggested - I think it made the flavors deeper and the beans more tender. Also you are right - a good olive oil is important. And good parm cheese! Great recipe I will make many times (just like the amazing cider butternut squash soup I also found on this site!)

barbara960 December 30, 2012
Merrill, it is such fun to see your baby- mine are all in their 20s. She is adorable. Once my kids were old enough for solids, I always put whatever we were having in the food processor and fed it to them- why not?

Sewassbe December 28, 2012
We never had anything but baked beans from a can growing up and I always thought I hated them... until I discovered Mexican food. Now I can't get enough and have branched out into Italian beans, too. But my favorites will always be my version of the refried beans at one of our favorite Mexican restaurants (where all the staff are native Spanish speakers) - lightly salted pinto beans pureed with lard (or bacon fat) and served piping hot with a little shredded cheese on top. The restaurant I'm pretty sure uses queso quesadilla, but we use monterey jack, which melts very well. I could eat that stuff forever and it's so smooth and comforting. Sometimes I add smoked spanish paprika and garlic powder, sometimes I don't. So good.

EmilyC December 28, 2012
Love this idea for my 9-month old! Thanks for sharing--going on my list of things to make soon. Since Clara is liking her beans, have you tried the marinated gigante beans from the antipasto bar at Whole Foods? (I'm sure they'd be super simple to make at home, too.). They're a good finger food for babies/toddlers...I often serve them as an appetizer and kids devour them.

lastnightsdinner December 28, 2012
Oh, that sounds fantastic! Julian loves beans, too - one of his favorite meals is white beans slowly cooked with broth and herbs, served with a little duck confit. And black beans with cheese and avocado! I was really happy to find that the market at Grand Central has glass jars of cooked cannellini and garbanzo beans - they're really tasty, and great in a pinch if you don't have time to cook them from dried (hey, it happens).
Author Comment