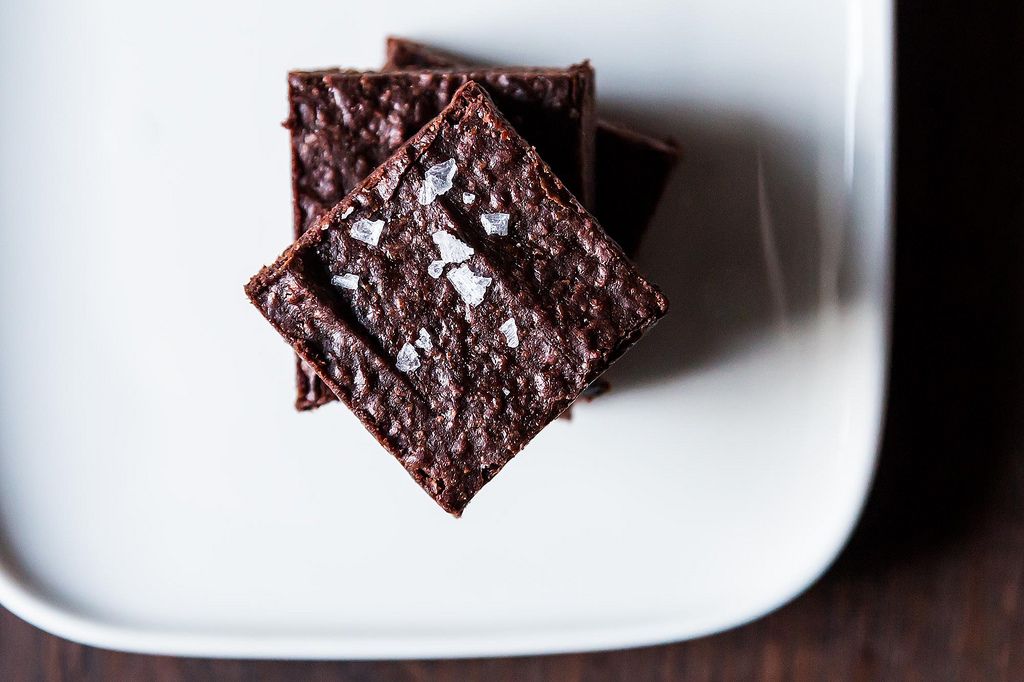 A genius brownie has been tricky to pin down -- until now.

I've been searching with the same vigor as the genius roast chicken hunt of 2012 -- a stab at science, driven by memory and chewy, chocolate lust.

What I've found is that most brownie recipes out there are remarkably consistent: chocolate is melted with butter, then mixed with sugar, eggs, then flour. They come together fast, and you are a happy clam. Still, I figured something even better had to be out there. 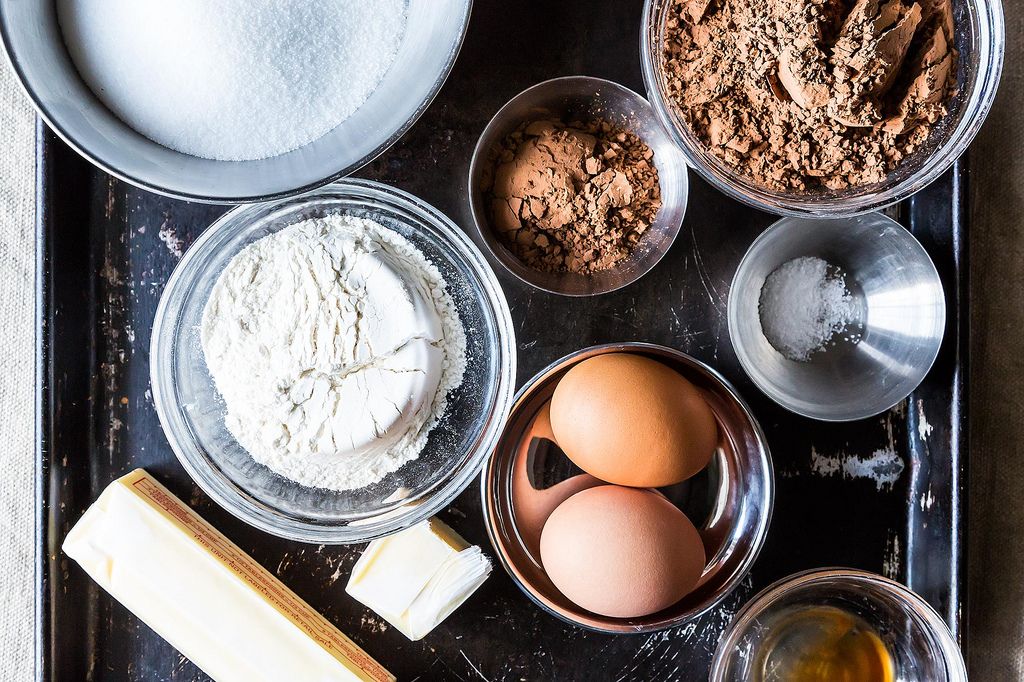 But these brownies, in their various guises -- from squat, melting fudge to pliant shingles of cake -- were all unfailingly, suspiciously, good.

If all brownies are genius, aren't no brownies genius? I gave up. 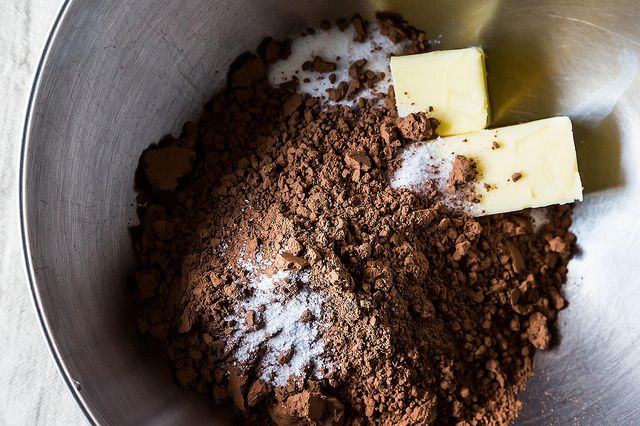 Then pastry chef Shuna Lydon told me about a recipe that was different from the herd. It did not surprise me at all that it came from Alice Medrich. She's written close to a dozen books on baking; she's the First Lady of Chocolate, and the one who brought out macaroons' punk rock side. 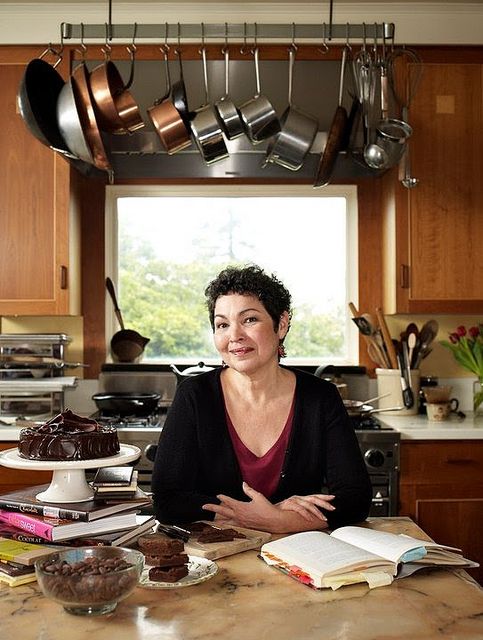 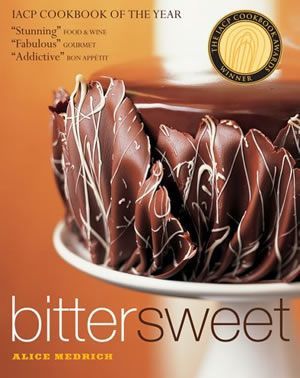 "Alice knows chocolate. It speaks to her. We're lucky to have her as a translator," Lydon wrote to me. "Alice's cocoa brownies changed my life."

The recipe comes from Bittersweet, the 2003 IACP Cookbook of the Year -- it's one part of a master brownie recipe Medrich designed to use whatever chocolate you have in the house.

But the best version happens to be the one you can make when you've eaten all the 70% bars you bought for baking, and only a forgotten tin of cocoa powder remains on the shelf. 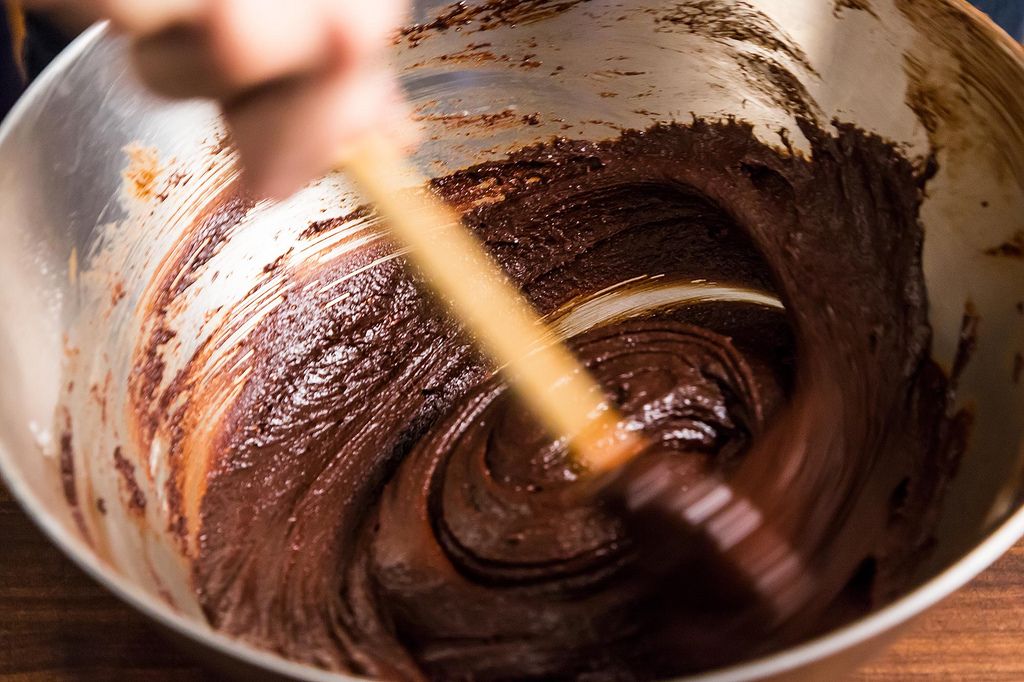 She also threw in 40 strokes of beating with a wooden spoon, to set the batter straight (don't worry -- there's so little flour, you won't overwork it). 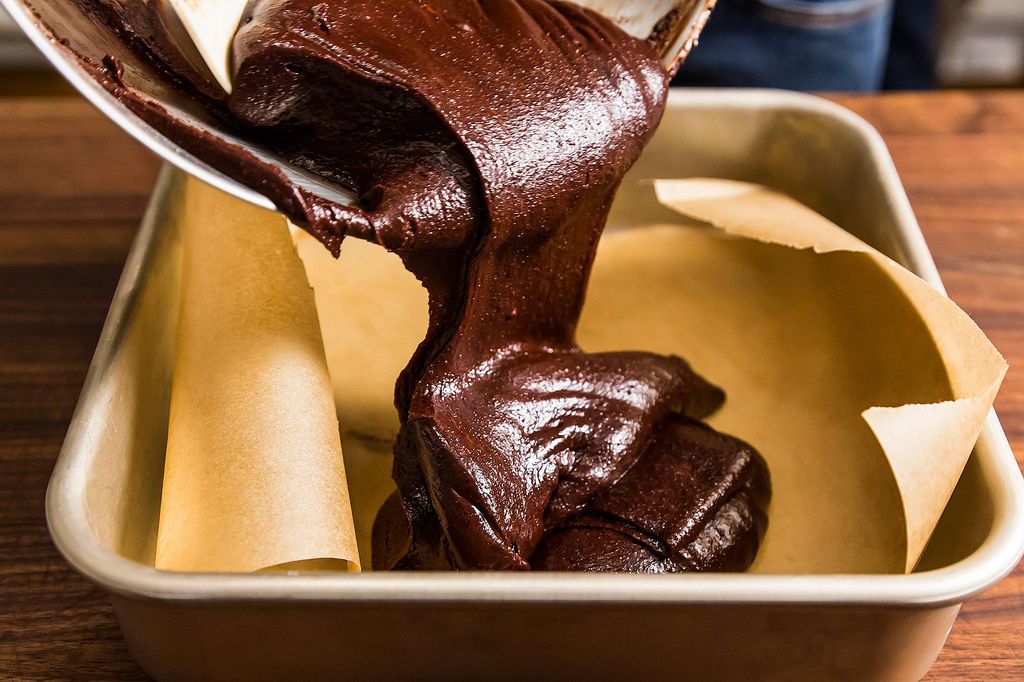 What kind of cocoa, you ask? Anything you've got will work.

However: "When I teach, I make two batches of the brownies, one with (my favorite) natural cocoa powder and one with Dutch process cocoa," Medrich told me. "People often think the darker (Dutch process) brownie is going to taste more like chocolate. They are usually surprised to find that this is not true!" 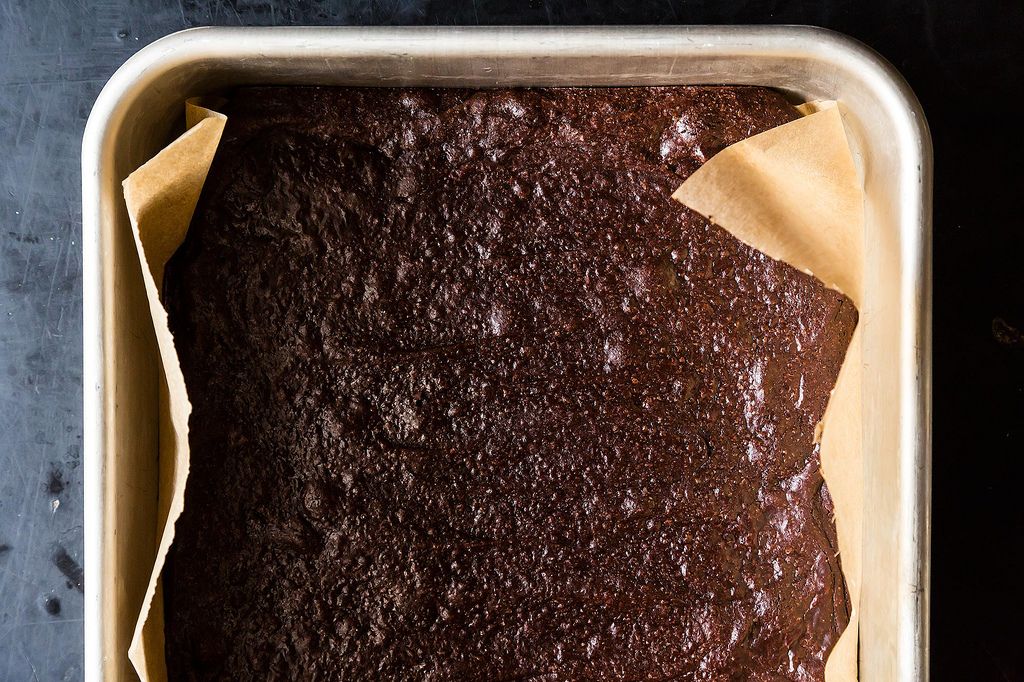 She has continued to tweak this recipe over the years -- you may have seen the browned butter version on the cover of Bon Appétit a few years back. "Those are Best Cocoa Brownies 3.0 or 4.0 or something like that."

Oh, and that sprinkle of flaky salt on top? That's not Alice, that's us. But I don't think she'd mind. 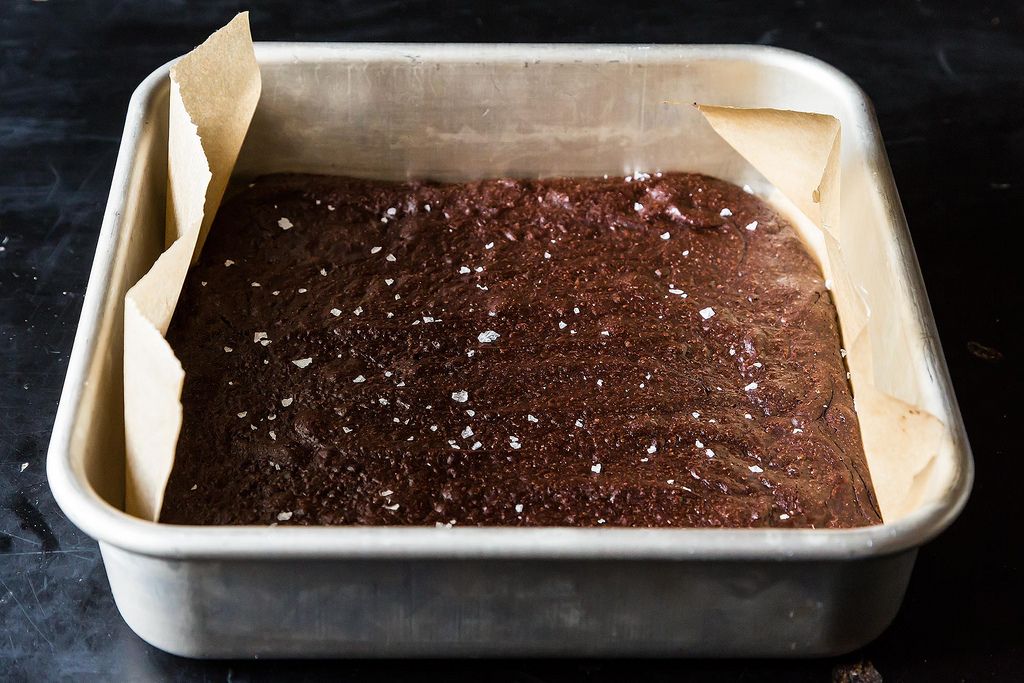 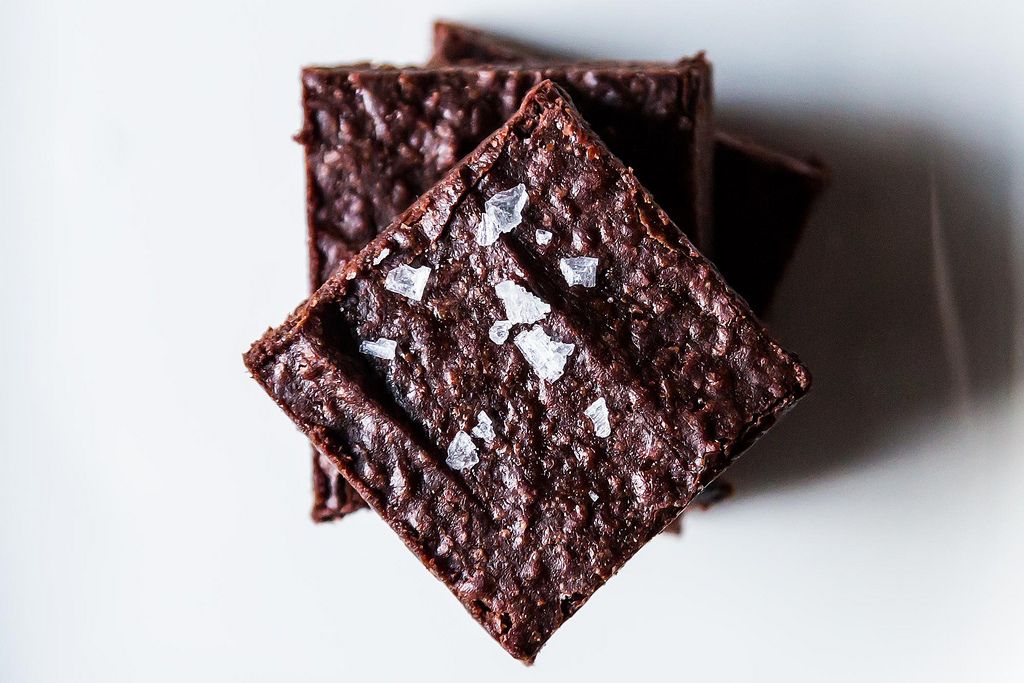 Dee April 2, 2020
Hi! My brownie recipe I put instant coffee in to up the hershey cocoa powder umph.

J April 23, 2015
Alice Medrich: These brownies are GENIUS! I have made them 4 times, and if the recipe was mine I would be trying to patent it! Baking the recipe makes me happy because it is a reliable five star success! [One question-what kind of knife do you use to cut the brownies? I have been using a bread knife, which works, but is there a better choice?] I will be looking for your other recipes!

FavourFlavour March 6, 2015
These are as close to a dark chocolate truffle as you will ever bake. Such amazing deep chocolate flavor! Highly recommend.

Sigita July 5, 2014
Nothing beats the flavor and texture- especially with great cocoa.

-browned the butter then poured it over the cocoa, sugar, salt and vanilla and mixed it up, so I didn't use the simmering water step as the hot butter was enough heat
-let that mixture cool for 5 min, then added the eggs one at a time with a hand mixer to REALLY beat the ingredients together until it was quite thick
-added the flour as directed and poured the mix into an 8x8 lined with parchment (key!) then I really had to spread the mix as it's very thick to make sure that it was even in the pan
-baked at 325, mine took 27 minutes total
-cooled TOTALLY, then pulled out the brownies using the parchment and sliced with serrated knife
They look/smell/taste incredible! I've made this recipe before and will definitely use the brown butter in the future for the depth of flavor it adds (esp. since I use plain old Trader Joe's cocoa powder)

L K. February 8, 2014
These remind me of my favorite brownie ever at Nancy Silverton's La Brea Bakery in LA. They are not as thick though. Hard to describe (I'll try!) the smooth, creamy, brownie like intense chocolate goodness. Topped mine with chopped pecans. Salted 5 minutes before they were done. Because there is so little flour the GF Cup 4 for Cup worked great. Using Swerve or Simply sugar makes it ok to eat more. Simply addicting.

Malinda February 2, 2014
I've been using this exact recipe for years (actually have some on my kitchen counter right now), and it makes - hands down - the best brownies. Absolutely adore them.

tastysweet February 2, 2014
Can one use extra large eggs? Or will that completely alter the outcome. I remember Ina Garten mentioning she always uses xtra large eggs.
Looks tempting to make. I seem to have problems making brownies so I make them into cup cakes. And then I freeze them. Defrost 30 sec. in microwave and behold an almost lava type brownie. Oh, chocolate chips must be in batter.....for me.

swaff February 2, 2014
I only use eggs from local suppliers who treat their chickens well and they aren't graded. This is difficult because the sizes vary within a box of a dozen, from small to jumbo. I wish more recipes called for a measurement of eggs - like 1/2 cup of eggs or 1/3 cup. It would make things easier. I try to be exact when baking - I weigh my dry ingredients, but the egg thing has me stumped. Does anyone else have this problem?

Andrew C. May 26, 2014
Eggs are surely graded by weight. Google weight of large eggs, then weigh your eggs.

lee December 6, 2013
My mom's recipe! One pan brownies we called them. Melt the butter in 9x13 pan, add all the rest stir and do not, as I learned very quickly one brownie making session, do not overbake. Mom passed away before I could write this down for the ratios, so I am happy to see this here.

Elizabeth G. October 20, 2013
For me, this is more a gooey chocolate cake than a brownie. A brownie needs more heft I think; this one yields too quickly. And there is no thin crumbly paper-thin crust. The Baked brownie, for me, is the perfect brownie. So while Alice Medrich's creation is exceptionally tasty, for a brownie, I don't think I'd go there.

Dimitrios February 3, 2014
This was my experience as well. A little too gooey and not enough substance.

Lizz October 1, 2013
I've been making these brownies for /years/--after having a mad brownie craving and no chocolate in the house. They are transcendent, and the only brownies I can eat anymore. All others feel inferior. Thanks for bringing them to a whole new audience!

Dina M. October 1, 2013
I've been eyeing this recipe and trying not to make it for two weeks. I finally caved last night, and I realize I should never fight the instinct to bake something that looks so delicious! This is THE BEST brownie recipe ever. Everything Monica M says below: fudgy, chewy and surprisingly chocolatey. So easy to make--you can do the whole "melting" process while you're cooking something else. I baked mine on 325 in convection mode on a lower shelf, and got an excellent almost crispy crust on the top. Trying to stay away from them until tonight.

Monica M. October 1, 2013
I've been making this recipe a lot lately. It seems to keep getting better. And (surprisingly to me) Alice is right - natural cocoa does seem to make for an even more chocolaty brownie than Dutch-process. Who knew! Great, great recipe for an extremely fudgy, chocolaty, and chewy brownie. That's everything I'm looking for in a brownie! Thank you, Alice!

Kathcooks September 27, 2013
Growing up, I didn't know unsweetened chocolate came in solid squares. The Hershey's Cocoa can was the only cooking chocolate in our house. It made everything from hot cocoa, chocolate cake with chocolate frosting, and the absolutely most fantastic boiled fudge and chocolate brownies. Thanks for sharing!

Kelsey I. September 26, 2013
These have been up on Smitten Kitchen for years. Give the lady some credit.

pooh August 8, 2013
BEST BROWNIE RECIPE EVER!!!!! they're so perfectly gooey and chocolately!

Latetotheparty July 6, 2013
These have become my all time favorite chocoholic craving treat. Always fantastic. I do add a bit of esprsso and have substituted demerara on occasion. It always works. Next time I will tray a glaze.

on T. April 15, 2013
I've made these again over the weekend and got a wild hair. I divided and baked the dough in cheesecake pans and tonight I'll be making lady finger lined Tiramisu, Orange Dreamsicle and Almond-Cherry Cheesecakes with the brownie base.

denise&food March 22, 2013
I have made these twice and they are fantastic. A great chocolate taste and not too sweet. They travel well and freeze well. The nuts are necessary!