Today: Emma Gardner, the baker, writer, and photographer behind Poires au Chocolat, makes a Spanish almond cake with centuries of history behind it. 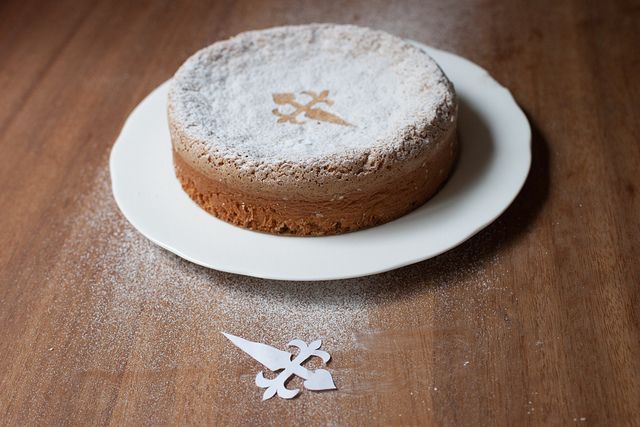 In Santiago de Compostela, Spain, Tarta de Santiago is sold everywhere. The city lies at the end of one of the most popular medieval pilgrimages, the Way of St. James, which has been followed since the 9th century. It is still walked today.

The Tarta is a simple almond cake with just a few ingredients. In some recipes, the cake batter is baked into a tart base, but like Claudia Roden, my inspiration for this recipe, I like the idea of the cake standing alone. Claudia also believes that this cake could have evolved from a Passover cake brought to Galicia by Jews fleeing Andalucia in the 12th and 13th centuries. 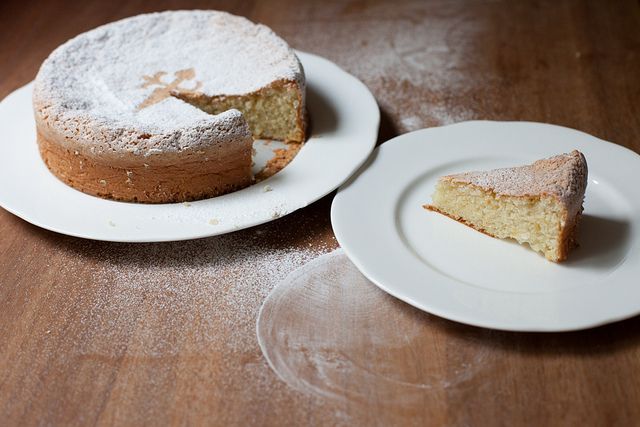 The most distinctive feature of the Tarta is the cross that is stenciled in the middle with icing sugar. It is the cross of St James, whose relics are believed to lie in the Cathedral de Santiago de Compostela at the end of the route.

I found my cross template online, printed it out, cut around it and then used it as a stencil. I’ve kept it so I always have it on hand. It’s a very effective technique -– I’d love to try and use it with other patterns to decorate simple cakes -– some initials, perhaps, or a number for a birthday. 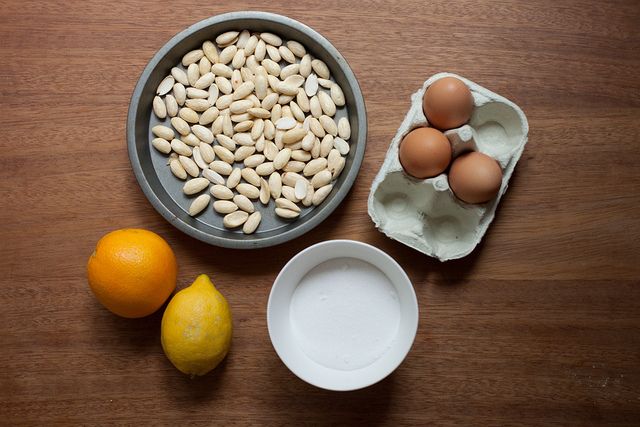 Preheat the oven to 350° F. Butter a 7-inch round cake tin, then dust with flour until fully covered and tap out any excess.

Process the almonds until they're finely ground but still have some texture -- a touch bigger than the ground almonds you usually buy. I always grind my own almonds for this cake because I think it improves the flavor; when you have so few ingredients, it makes a big difference. 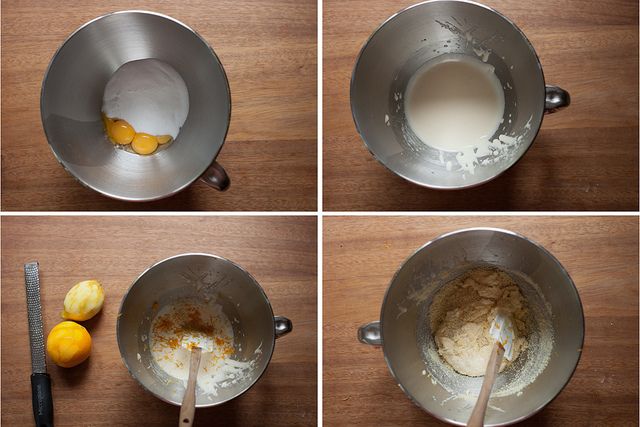 Next, separate your eggs and place the yolks in a bowl with the sugar and salt. Whip until pale, thick, and smooth. Add the zest, stir, then mix in the almonds -- you'll have a pretty stiff paste. 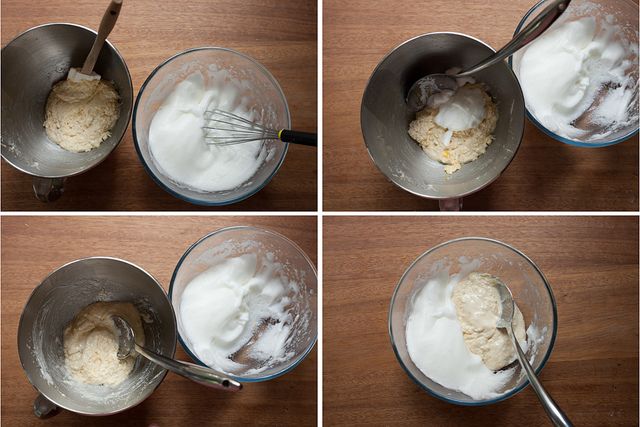 Whip the whites up to soft peak. I usually do this by hand as my Kitchenaid bowl has the other mixture in it and I like the control, but you could transfer it to another bowl (or, if you're very clever, have an extra Kitchenaid bowl).

Dollop a big spoon of the whites into the almond-yolks and fold it through to loosen it; you don't have to be too gentle. Scrape the whole bowl into the side of the egg white bowl (so you don't squish the volume out of the whites by glooping it all on top). 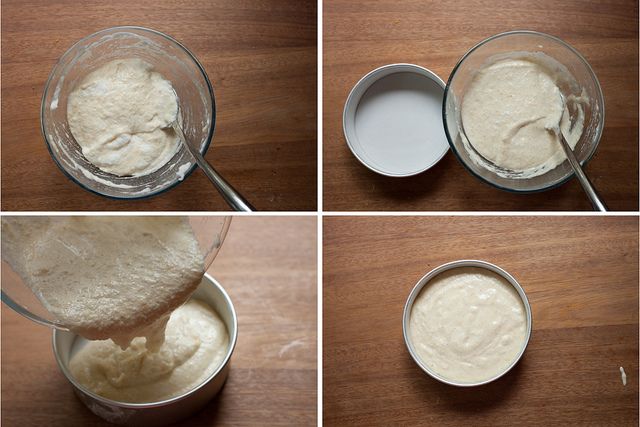 Carefully fold the almond-yolks into the whites. It needs to be consistent, with no lumps of either mix, but don't overdo it -- you want to keep the air in the mixture, as the egg is the only rising agent.

Scrape into the prepared tin -- no need to level it off. Place into the oven and bake for 30 to 35 minutes. The cake should be set, golden brown, and a toothpick should come cleanly out of the center. 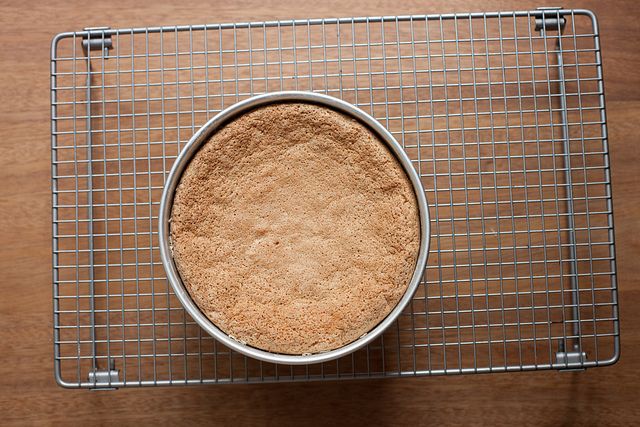 Leave the cake to cool on a wire rack. It will sink a little in the middle -- that's normal. Remove from the tin. Place a paper cutout of the cross in the middle of the cake, then dust the cake with icing sugar. Carefully lift the cross off, then transfer the cake to a serving plate.

smb February 4, 2022
Love this naturally gluten free reciipe. Any idea what would happen if I did not use blanched almonds and went with normal almond meal?

I would personally add some almond extract to enhance the flavor of the cake and maybe an apricot glaze with some berries.

Catherine R. February 4, 2022
Almond meal is much, much finer than ground-and-sifted almonds. You will need to adjust the amount of almond meal and liquid to get the right texture, which should not be too dense or wet, but evenly moist and cooked thru. This is an iconic cake in Galicia. After discovering it in Santiago de Compostella back in the '80s, I bought several cookbooks before I found the recipe that recreated what we had enjoyed in Spain. It was in Miramar Torres' The Spanish Table. Her recipe includes a bit of Spanish brandy (a high quality one has a hint of almond flavor). The recipe on the winery website also includes cream sherry, which was a new addition to me. Make it as written before you play with it too much. I would go very easy on extract, and apricot glaze and berries would turn it into something else altogether.

cindy February 11, 2014
How would you supplement almond paste for this if you have a hard time getting almonds

Gita1 July 29, 2013
Awesome cake!!! This is my kinda cake with simple ingredients. I ground my own almonds and I baked it in a 8 inch pan. Love this so much. Thanks.

lilliwill July 20, 2013
perfect for breakfast! I made it this morning to great reviews...simple and delicious.
Author Comment

Catherine R. July 20, 2013
This is a wonderful cake. I have made-many times-a slightly different version of this recipe (from Miramar Torres), one that uses a bit more liquid (including brandy) and does not separate the eggs. Based on that experience I would advise caution, and a bit of experimentation, with almond meal versus home-ground almonds. I have not been happy with the results. No matter how much you sift and grind with a food processor, finely-ground meal does not absorb moisture the same way, which significantly affects the final product. Personally, I will go with home-ground after my several efforts with store-bought meal. With the weight given in the recipe, you can use blanched, sliced almonds, which will be easier, without being totally different.
Author Comment

Poires A. July 22, 2013
I'll have to look up that recipe - thanks for the tip! I've seen some recipes with brandy, too.
I agree that there's a difference between home-ground and bought ground almonds - especially as, for this cake, I keep the almonds slightly course for texture. The moisture content is often different, too, as you say. The sliced almonds would work, though I'm not sure they're much less work in a processor.

barcelona July 29, 2013
Mhmmm looks great! Where can I find the recipe for the miramar one?

Two T. July 19, 2013
This is so gorgeous and simple. I have two questions: do you think would this work in a 9-inch round pan and just be a little shorter in stature with a slightly less baking time? Also, and I know this is a stretch but I'd love to make this for a friend experimenting w/ grainless/low sugar diet. Do you think subbing some of the sugar for honey would work? Thanks!
Author Comment

Poires A. July 22, 2013
I do think it'd work in a bigger tin - I think they're often a bit thinner than the one I make. Just keep an eye on the timing, as you mentioned. I've never tried honey in here - I'm not sure how well it would whip up with the yolks, but I've never tried it so you never know! I'd be careful of reducing the sugar too much - it is needed for the structure. I'd love to know how it goes if you try.

Sarah_Sherwood July 19, 2013
This looks like the perfect summer cake! (For when ice cream gets too predictable.)
Author Comment

Poires A. July 22, 2013
Thanks for answering - the weight would definitely be the easier way to do it but I think that 125g would also be equivalent to 1 1/4 cups of ground almonds. Do note that the texture would be a bit different, though, as the shop-bought stuff is finer than the stuff I've ground down.

Marian B. July 19, 2013
I walked the Camino last summer, and this recipe -- seeing it now, and remembering all the times that I ate it -- makes me very, very happy. It is so good, light, perfect.
Author Comment

Poires A. July 22, 2013
It's always nice to have comments from someone who has walked the route - I wish I could say the same!

Poires A. July 22, 2013
Exactly. Though, as I've said above (I can't believe I'm saying this, I'm a massive supporter of weight over cups) but I believe it would be 1 1/4 cups of ground almonds.

zahavah July 19, 2013
Filing this away for Passover. It look like you don't flip the cake over to serve - is that correct?

Ileana M. July 19, 2013
Beautiful! A word of warning though on using this as a birthday cake. You might make a lovely 'K' cutout in the icing sugar topping in honor of your friend's 21st. You'll put some nice candles around it, and then she'll blow it out. And then it will get all over her black dress and all the photos will be filtered through big sugar clouds. Actually, it was kind of awesome.
Author Comment

Poires A. July 22, 2013
I love the idea of it billowing into the photos - it does sounds rather awesome! Will keep it in mind, though - thanks for the tip.

Chris C. July 19, 2013
The cross is a nice touch and gives the cake a sharp look. I'm trying this on the weekend for sure.
Author Comment