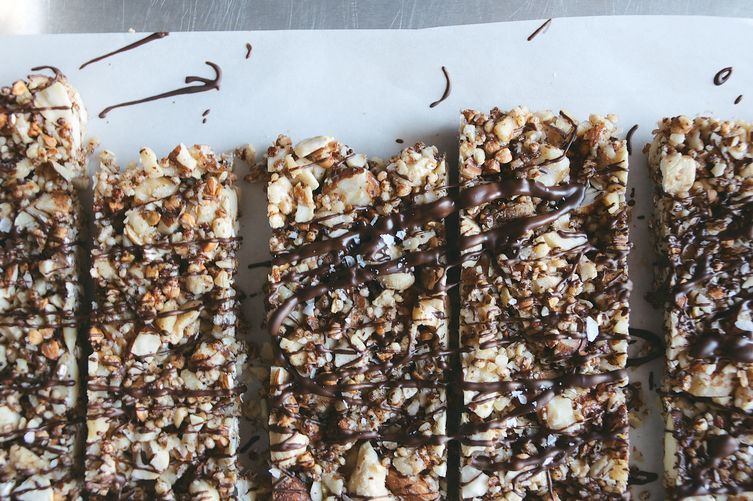 There are certain, unnamed nut bars out there that used to be my go-to snack until one day I realized that a) I was spending way too much money on them, and b) they weren't really that great for me, health-wise. They have a boatload of sugar, a bunch of filler additives, and ingredients I would have to Google to understand.

So a little under a year ago, I tried my hand at making my own nut bars and I discovered that a homemade version is not only better for the wallet, but as an added bonus, I can completely control what I put into them. That means less sugar, less sodium, and a lot more of the good, nutritious stuff. 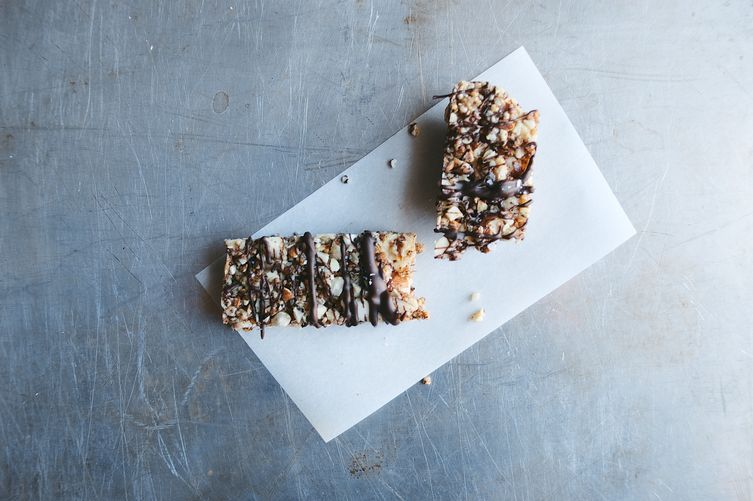 It took some experimenting with different nuts, dried fruits, sweeteners, and spices to get the amounts correct, but soon I had a personal stash of healthful snack bars. They are the kind of thing I make on a Sunday afternoon and snack on all week.

These bars lend themselves to different flavor combinations. Gear them towards your personal preferences by trying various nuts, spices, fruits, and grains, as well as sweet or savory varieties. I personally love the combination of dark chocolate, sea salt, and roasted nuts -- those flavors provide me with a sweet yet wholesome snack that doesn't leave me with a crazy sugar high. 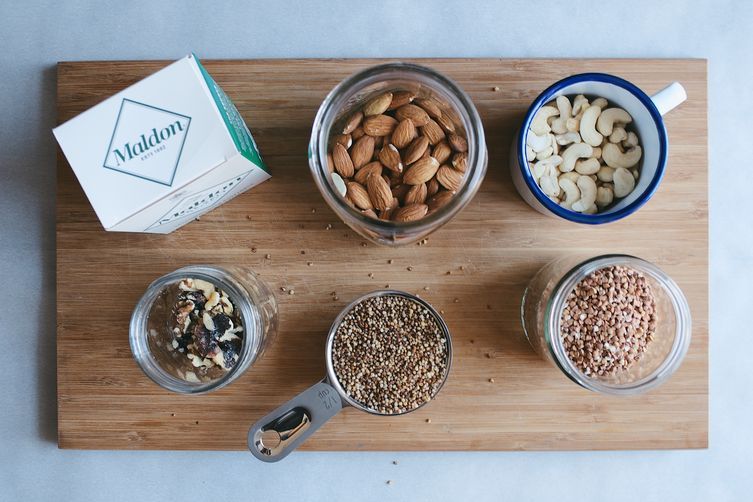 Preheat oven to 350° F and line a large, rimmed baking sheet with parchment paper. Prepare an 8 3/4- by 12 1/4-inch jelly roll pan with parchment paper and set aside for later. Make sure the parchment hangs over the side -- this will make lifting the bars out easier later on. 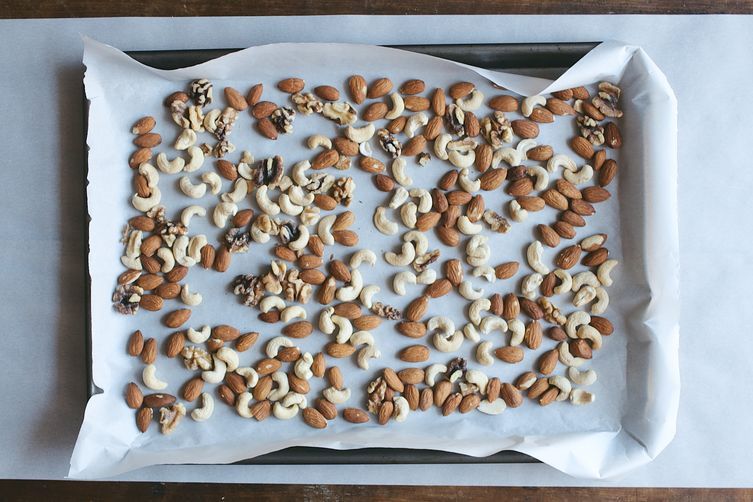 On the large baking sheet, combine the almonds, cashews and walnuts. 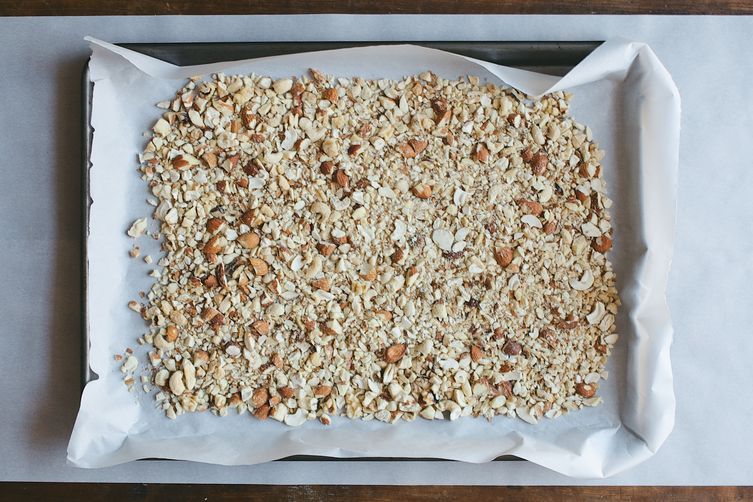 Toast the nuts in the oven for 5 minutes. Remove from the oven and let cool. Roughly chop the nuts in a food processor in batches, then reduce the oven temperature to 325° F. 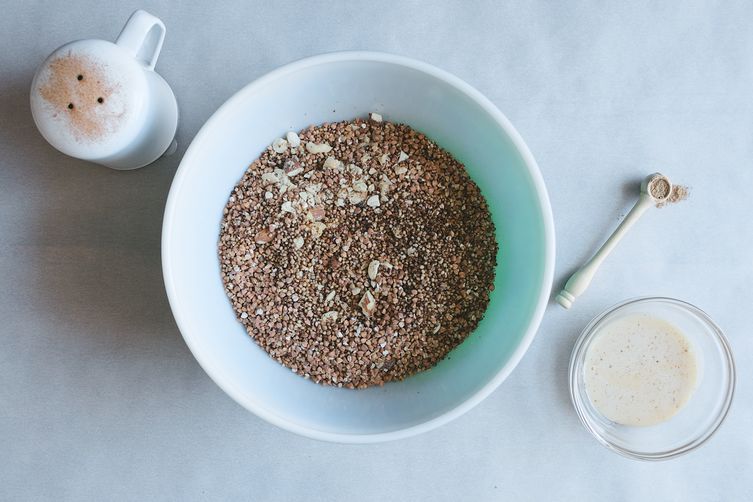 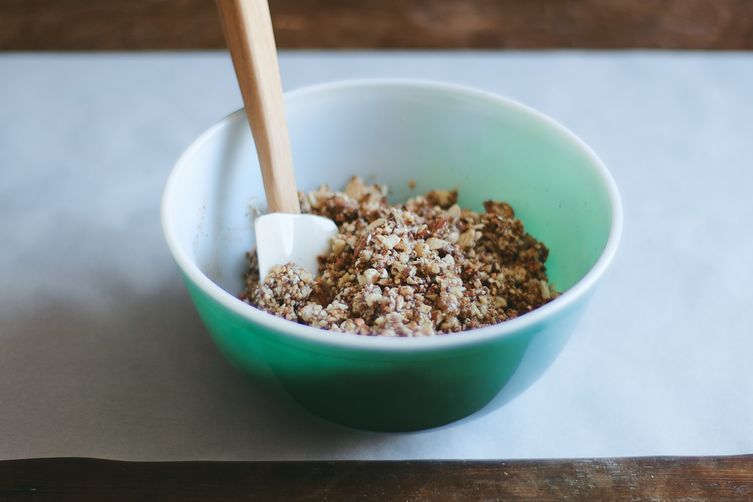 Mix in the honey and stir for one minute; the mixture will be thick and sticky. (If your honey isn't runny, zap it in the microwave for a couple of seconds until it runs off the back of a spoon.) 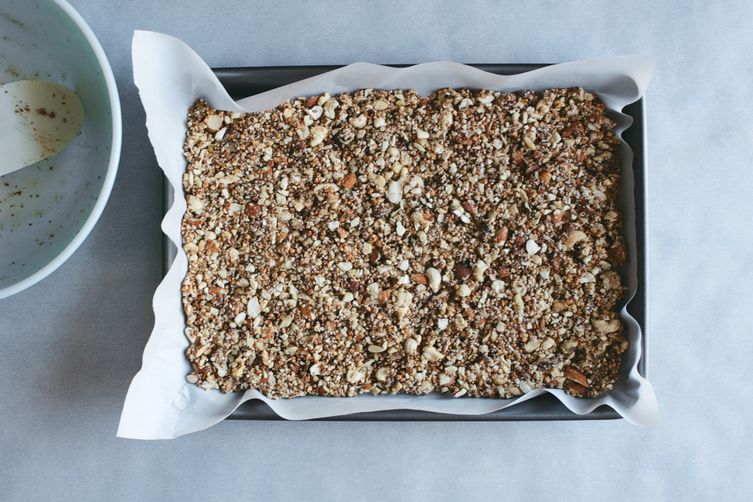 Transfer the mixture to the prepared jelly roll pan. Using the back of a spatula, evenly press the nut mixture into the pan. Bake for 12 to 15 minutes, until lightly browned and fragrant.

Remove from the oven and let cool completely. Then, place the whole pan in the refrigerator for about 10 minutes -- this makes the process of cutting them into bars easier. 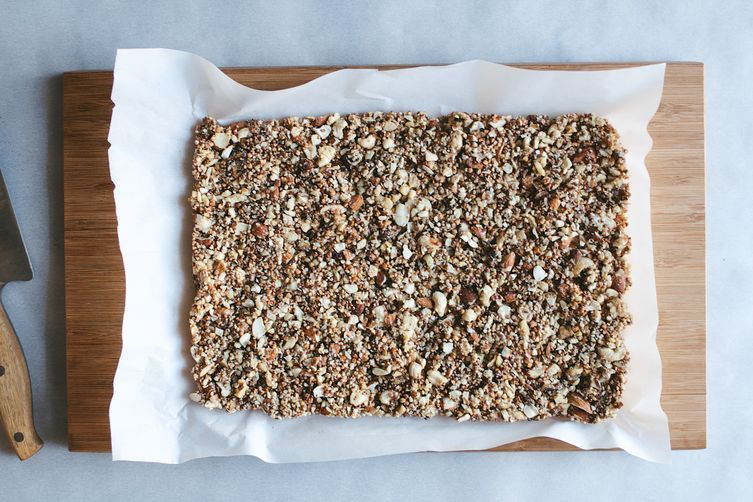 Using the parchment "wings," lift the solid mixture from the pan and place on a flat workspace. 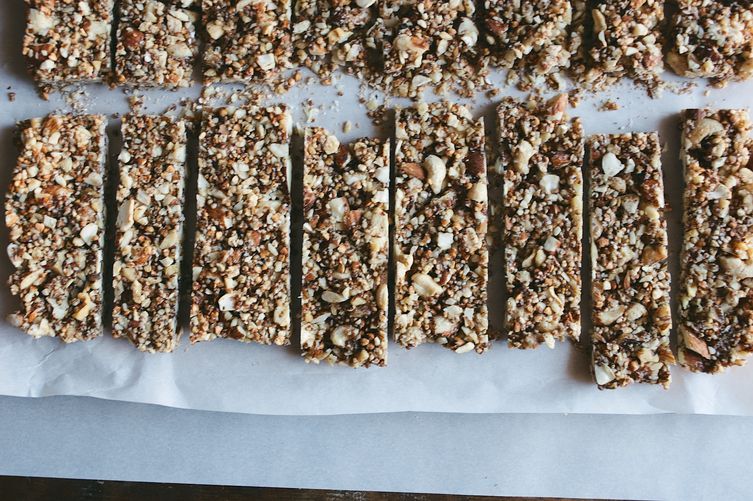 With a sharp knife, cut the bars in half lengthwise and crosswise, then cut each section into four bars until you have 16 pieces. 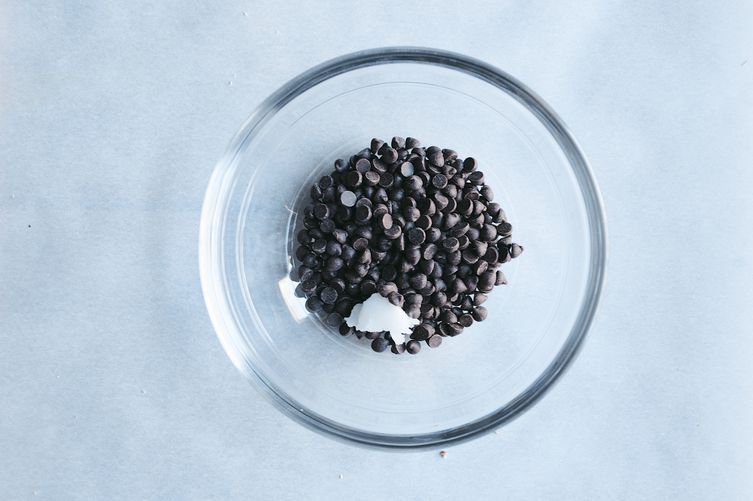 In a double boiler or a heatproof bowl, combine the chocolate chips and coconut oil over simmering water; stir until melted. 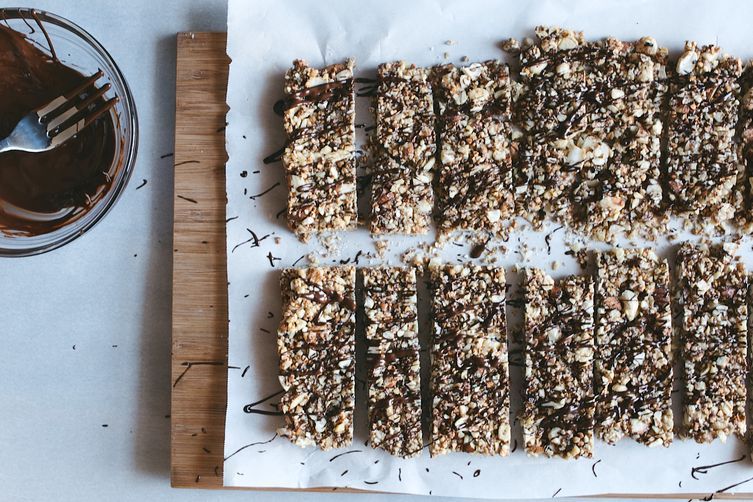 Remove from heat and use a fork to drizzle the runny chocolate over bars. Let the chocolate set, then sprinkle with the flaky sea salt. 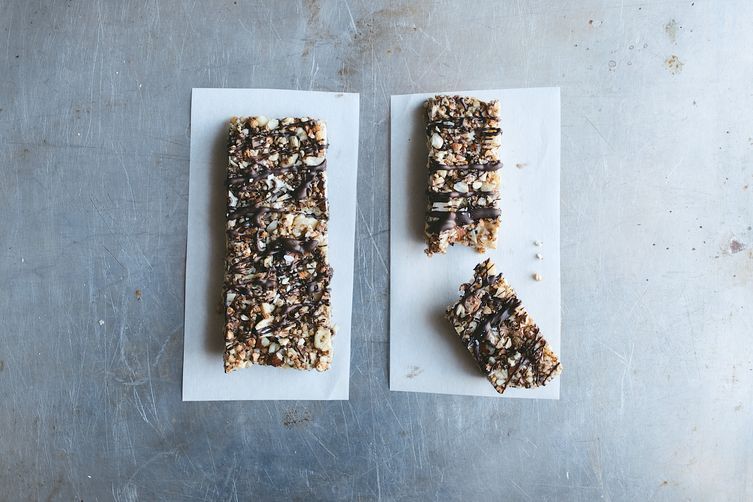 Store in an airtight container for one week. If your house runs on the warm side, store in the refrigerator. Enjoy!

dollyandoatmeal.com
Lindsey S. Love is a food blogger living in Brooklyn, NY with her husband. Her cooking and baking focus on healthful gluten free and dairy free, with occasional vegan recipes. You can follow her at dollyandoatmeal.com for additional recipes.

smat0904 February 9, 2014
Thanks so much for sharing this recipe. I have looked for a good bar recipe for a long time that does not have a huge amount of sweetener - this is it! I made them this morning, and I hope to have some by tomorrow!--so tasty and easy.

megarette January 19, 2014
I finally made it! With some substitution based on what I had available but it worked really well! Thanks so much for the post.

AMuk January 19, 2014
I really like this recipe. I didn't have all the ingredients and had to substitute with regular quinoa, brown rice syrup and carob chips. I also added a few dried, chopped figs that I had on hand. They came out just amazing! Thanks.
Author Comment

Eat T. January 3, 2014
My little boy is starting school this year, these will be perfect healthy treats to pack in his lunchbox. Thanks for a great recipe! X Jade

Dalia January 1, 2014
These look great Lindsey. I've been obsessed with making Kind-like nut bars and love the incorporation of groats in your recipe. Curious about how the honey impacts the integrity of the bars. Does it make the bars soft and sticky or do they hold together really well? Thanks!
Author Comment

Lindsey S. January 2, 2014
After cooling the bars (post-bake) the honey acts as the "glue", as it holds them in bar form.

Sena January 1, 2014
Sounds yummy! Others have already mentioned that the recipe isn't vegan with the inclusion of honey, so the title of the recipe should be modified. Perhaps it should say "diary and egg free" instead of "vegan." I do eat honey, so I can make the recipe as is. The current recipe title, however, is misleading to ethical vegans.

Nicola G. January 1, 2014
These look great Lindsey, might just make them now as we out of snack slice for the lunch boxes. Love your recipes!

HolisticHunny January 1, 2014
These sound wonderful! A recipe for snack bars that does not rely on dried fruit!! I have one question - "puffed" quinoa - does that mean "cooked" as opposed to uncooked/raw? I have everything I need to make this recipe right now. Thank you!
Author Comment

Lindsey S. January 1, 2014
Puffed quinoa is very similar to popcorn; stovetop puffed quinoa won't get be as "puffed" and light as the commercial kind, but it will get crunchy and nutty. You could also substitute puffed brown rice or puffed millet.

glammie January 1, 2014
These look great and I'd love to make these to include in my son's lunchbox instead of anything Quaker Oats makes. But I can't send him to school with anything containing nuts.

YoungChef23 January 1, 2014
I don't eat grouts or quinoa, can you make it without them. Can't vegans use maple instead ?
Author Comment

Lindsey S. January 1, 2014
Yes, you can totally make the bars without the quinoa and grouts, just substitute 2/3 cup more nuts.

Yorkshire L. January 1, 2014
Not vegan because of the honey. What would be the best substitute so these could be made vegan?
Author Comment

marshmelones January 1, 2014
These sound great - although technically not vegan with the inclusion of honey, right?
Author Comment

Lindsey S. January 1, 2014
Yes, not technically vegan. If you're concerned about the honey, brown rice syrup would make a great substitute.