How to Make Puff Pastry, According to the Fearless Baker

I’ve always had a thing for dough. Bread dough, pie dough, biscuit dough...I love diving into a big bowl of ingredients and coming out of it with floury hands and something delicious to show for my efforts. This is why, despite being one of the more complicated recipes on my long list of doughy loves, I adore making puff pastry.

Puff pastry is made using a method known as lamination, where a block of butter is wrapped fully and sealed inside a dough. The dough then goes through a series of folds, where it is rolled out to a certain thickness and folded over onto itself. The first fold creates a series of layers (thin, alternating layers of dough and butter). The subsequent folds increase these layers, ultimately creating a versatile dough that can be used to make a huge variety of impressive desserts. (The dough for puff pastry can also be yeasted, which is then used to make things like croissants and Danish, and while the method is similar, this article focuses on a non-yeasted puff.) When the dough hits the heat of the oven, the moisture inside the thin layers of butter evaporate, creating steam, which creates the crisp, insanely flaky dough that is puff pastry.

I know that I’ve already lost some folks with that last paragraph. Maybe you’re wondering if you can just use the stuff from the freezer section for the recipes I include below—and yes, frozen puff pastry exists, is an easy option, and some brands are pretty good (Dufour brand is the finest I’ve found). But making your own puff pastry is more achievable that you might think, and in addition to being a satisfying process for those who love a baking project, it allows a few different benefits:

My favorite: You can get creative by adding your own flavors, like cocoa powder, spices, extracts, and more to the base dough and/or to the butter block. You can play with substituting other ingredients, like alternative flours (such as whole-wheat, buckwheat, or spelt). Homemade puff pastry will rise higher and have a better variance in texture than frozen varieties (aka crisper on the outside, and softer/flakier in the center). Hand-laminated pastry will hold decorative effects like scoring better, allowing them to show more clearly after baking.

Ready to make your own puff pastry? (Yeah you are!) Here’s what you need to know. 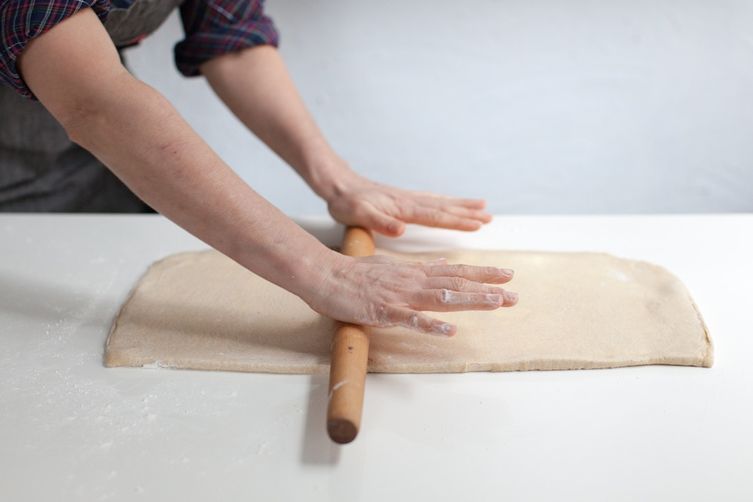 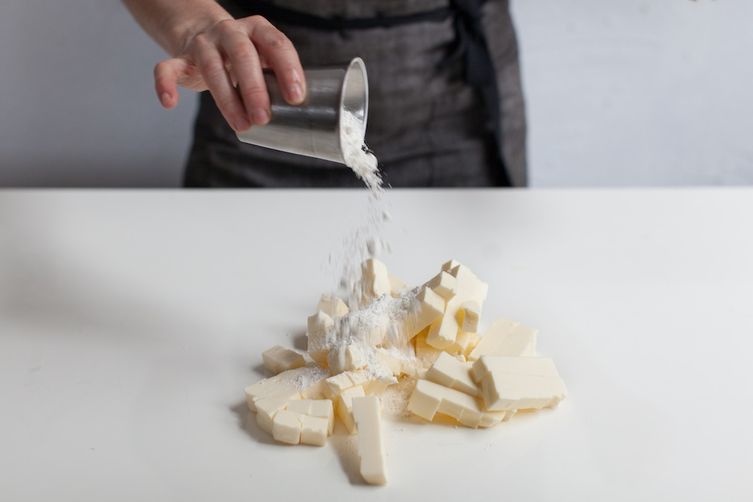 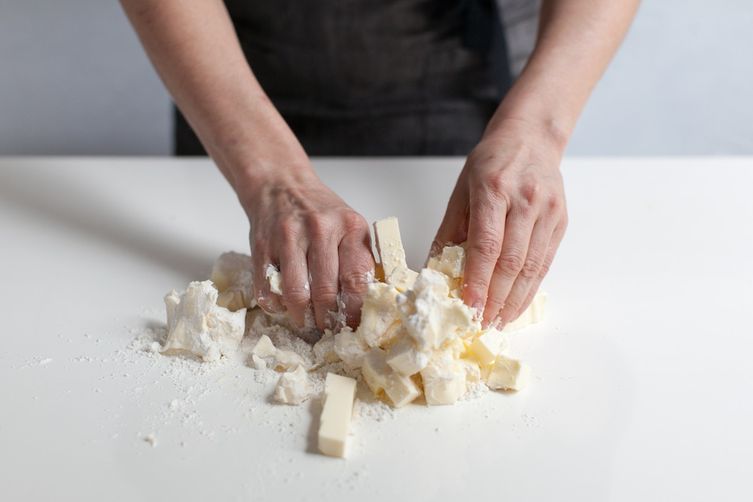 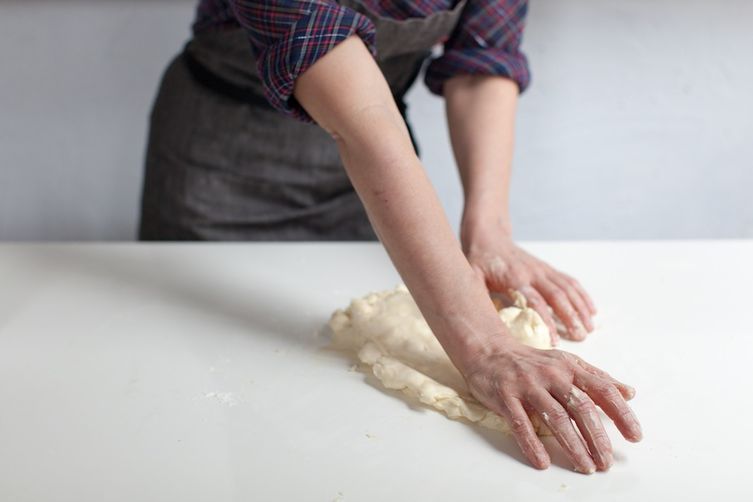 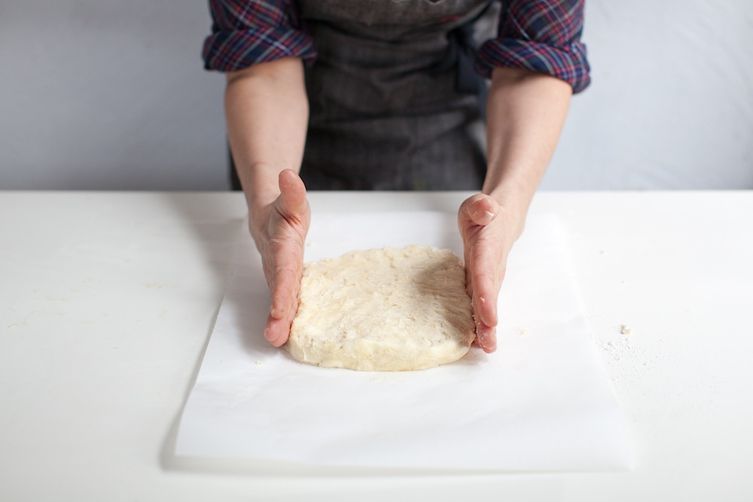 How to Make Puff Pastry

The dough comes together easily in the stand mixer, and she’s a beaut. Now, I know I’m already a self-proclaimed dough lover, but this one is delightful—very smooth, and it gets even smoother as you work with it. The dough is mixed in a stand mixer using a dough hook, because it takes a decent amount of kneading. A mixture of bread flour and all-purpose flour keeps it strong enough to handle all the rolling and folding, while still staying tender. A small amount of butter adds flavor and pliability, salt provides seasoning, and water binds the dough. Mix until smooth, then form into a small rectangle, wrap in plastic wrap, and chill before the butter lock-in.

Some methods use only butter for the butter block, but I like to add flour to mine because I think it makes it more pliable and easier to work with throughout the process. Start with room-temperature butter, mix it with the flour, then spread into a rectangle about ½-inch thick on parchment paper. Take care to square-off the edges as best you can, then cover the butter block and refrigerate until it is firm but pliable (65 to 70 degrees Fahrenheit)—it should be able to gently bend without breaking. 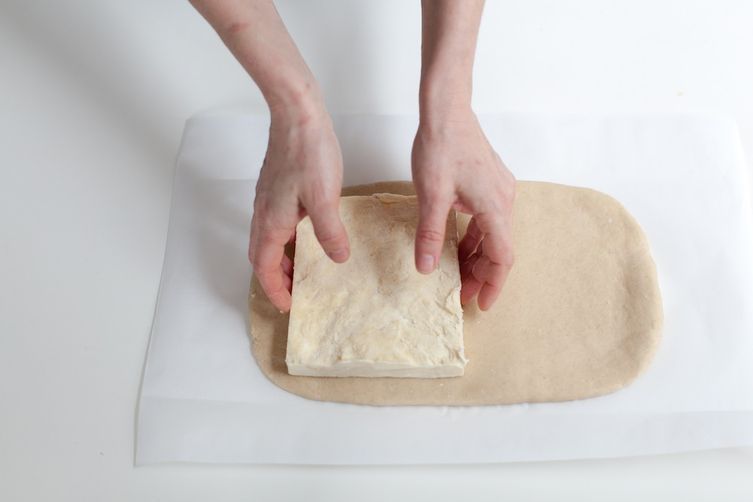 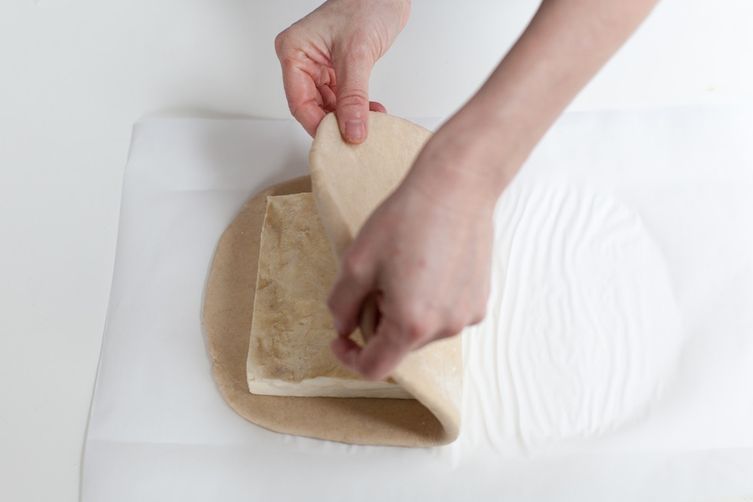 Sealing the butter inside the dough is called “the lock-in.” There are different methods of this—and there’s no one “right” way—but my method makes it easy to see if the butter really is sealed inside. Remember to use as little flour as possible to roll out the dough—this will make it easier to seal the dough later. On a lightly floured surface, roll out the dough to slightly larger than the width of the butter block, and twice the length. Be sure to keep the edges straight and squared off (you can use your bench knife to help with this). With one of the shorter sides facing you, place the butter block on one end of the dough, using the parchment to guide the placement, then peeling the parchment away. Fold the dough over the butter, pressing firmly to seal the edges all the way around. Tuck the excess dough at the edges under, pressing firmly to seal the dough back onto itself.  Tightly wrap the dough, and chill for 15 to 30 minutes, or until firm but pliable.

The initial fold is called a “four fold.” On a lightly floured surface, roll out the dough into a rectangle ½-inch thick. Face the dough so that one of the shorter sides of the rectangle is facing you, if it isn’t already. Fold the top portion of the dough about three-quarters of the way over the dough. Fold the bottom portion one-quarter of the way over the dough, so it meets the left edge (it should look like an open book with an off-center spine). Fold the larger side over the smaller side (essentially folding in half), then wrap and refrigerate for 20 to 30 minutes.

The next fold is called a “three fold.” On a lightly floured surface, roll out the dough into a rectangle ½-inch thick. Face the dough so that one of the shorter sides of the rectangle is facing you, if it isn’t already. Fold the top portion of the dough about on third of the way over the dough. Do the same with the right edge, folding it one third of the way over, resting it on top of the other piece just folded (like the way you’d fold a standard piece of paper to fit into an envelope). Wrap and refrigerate for 20 to 30 minutes. 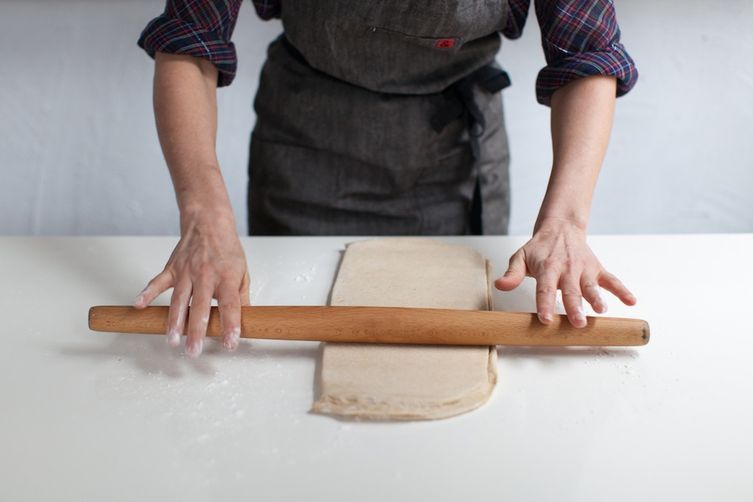 The next fold is a repeat of Fold A, a four fold.

The next fold is a repeat of Fold B, a three fold. After the final fold, the dough should be tightly wrapped in plastic wrap and refrigerated for at least 12 hours (and up to 2 days) before using. For longer storage, it can be frozen for up to 3 months (just thaw overnight in the refrigerator before using).

Put Your Homemade Puff Pastry to Good Use

What would you make with homemade puff pastry? Let us know in the comments!

MsDaffy October 23, 2020
Morning Erin, I made the double pie crust recipe to use for apple turnovers. I made the dough for flakey. I chilled the dough after mixing, after rolling, and before baking. The dough at no point became sticky or dry. I was very careful with hydration as i watch your video several times to memorized the steps. In making the turnovers I made a 6 x 6" squares put the apple filling in and fold it over and crimped the edges. After cooking the dough puffed nicely. But the top was nice flakey and tender, however the bottom was very tuff. I try putting less filling and bigger steam slits but the bottom was all way tuff. Am I using the dough for turnovers or is something wrong with my dough. Help I would like to master this dough.

Cynthia October 19, 2020
Hi Erin, when the butter starts to ooze from the dough... what can i do to salvage this mess? i believe i have several cracked butter too. Please help and advise if there's anyway to save this dough. Or if i can use it for another recipe... Thank you for your wonderful video!

Tasha H. June 12, 2020
Erin, you are definitely my new Sen Sei(sp?). You make everything look so easy and I’ve already within the past two days used your technique for piping and am finishing the last fold of puff pastry as I write this. Nice work lady!

Jennifer B. June 11, 2020
Omg! You are adorable! I randomly came across your video while having my morning coffee -down the rabbit hole of food 52’s amazing website! Anyway, you have inspired me to make my own puff pastry. Something I never had the nerve to do before!😊

MMXVintage June 2, 2020
Can you also make this recipe with GF flour, and if so which type? I miss puff pastries so much but concerned a GF flour would not get the light, flaky (delicious) crust.

Rosalind P. May 29, 2020
I saw, now in two places, that the dough (what you fold the butter into) can be made with oil. And a woman I met from Romania, living in Paris, said she always made the dough with oil I like the idea, especially now, trying to be judicious with butter because it's sometimes hard to find. The proportions were 340-405 grams ap flour (more for rolling) 1 t salt 1 T vegetable oil 1 T distilled white vinegar 3/4-1 cup soda water. Has anyone else heard of this technique? I'd like to try it.

arlene May 2, 2020
Wonderful lesson. Your procedure is very clear and well organized.

rloudon March 9, 2020
This is so comprehensive! You give me courage to try it again. I have tried and sometimes succeeded and sometimes not but always in a very small hot kitchen. Is salted butter okay? I preordered your book. Thank you.

Rosalind P. May 2, 2020
Yes salted butter is fine. Preference for unsalted stems from concern that salt in butter can be used to mask less fresh butter. But it performs the same and you can guard against stale or rancid butter.