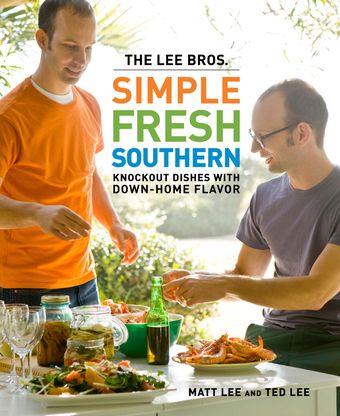 Kim Sunée is the author of the bestselling memoir, Trail of Crumbs: Hunger, Love, and the Search for Home (Grand Central). Trail of Crumbs was a Barnes and Noble Discover pick and a Booksense Pick, and has been translated into Korean, Chinese, and Hebrew. Sunée has been featured in the New York Times, Ladies’ Homes Journal, People, ELLE, and Glamour. She was the founding food editor of Cottage Living and a former food editor for Southern Living, and she has appeared as a judge on “Iron Chef America.” Visit her Web site at www.kimsunee.com.

Sunée's photo was taken by EunHo Lee of the Korea Times.

I was given the task of choosing between two very different cookbooks: Momofuku, which is also the name of a noodle bar — the first in an empire of award-winning New York City restaurants headed by Korean-American chef David Chang -- vs. Simple Fresh Southern, by the much-loved and highly accomplished Charleston duo Matt and Ted, also known as the Lee brothers.

I’m a strategic and avid restaurant diner, figuring out the best times to grab a spot at my favorite counters, and Momofuku Noodle Bar is no exception. I fell in love with Chang’s food from the very first mouthful of steamed bun stuffed with pork belly. Disclaimer: I am Korean-born, but I grew up eating po-boys and gumbo with my adoptive New Orleans family and don’t recall tasting kimchi as an adult until I was in my early twenties. So being a Southerner, I have a special place in my heart for Matt and Ted Lee’s comprehensive and delightful first book, The Lee Brothers' Southern Cookbook.

All preconceived notions aside, I approached testing from the Lee brothers' new cookbook, Simple Fresh Southern, and Chang’s Momofuku with the home cook in mind, choosing recipes from both contenders that I felt reflected the spirit of each. As an author and enthusiastic eater, I also tried other recipes that transported me, the words alone making me salivate with promises of a very happy mouth.

While the ingredients and methods in the Momofuku cookbook are perhaps less accessible to the average home cook, the story and purpose of the recipes are documented with precision and told with humor and passion. Two epigraphs set the tone for all who enter. One is by a fifteenth century Zen Buddhist: "...if someday you come looking for me,/I will be in a shop that sells fine seafood,/a good drinking place,/or a brothel." The other is by comedian Steve Martin: “Despite a lack of natural ability, I did have the one element necessary to all early creativity: naïveté, that fabulous quality that keeps you from knowing just how unsuited you are for what you are about to do.”

Momofuku includes recipes from three of Chang’s restaurants (Noodle Bar, Ko, and Ssäm Bar), with Chang giving credit to many of his cooks and staff for coming up with the brilliant flavor combinations — Brussels Sprouts with Kimchi Purée and Bacon Fried Chicken with Octo Vinaigrette — that are the essence of his food. And what is Momofuku food?  If you ask Chang, it’s “bad pseudo-fusion cuisine.” Peter Meehan, Chang’s clever and respectful co-author, quotes Wolfgang Puck, who describes Momofuku’s food as “delicious American food.”  Meehan agrees, asking, “Where else would labne and ssämjang and Sichuan peppercorns and poached rhubarb all end up in the same kitchen?”

The Momofuku recipes — a dessert of cereal milk (a riff on childhood flavors); grilled rice brushed with pork fat; shrimp and grits with slow-poached eggs — are thoughtful, ambitious, and creative, while the accompanying narrative offers insight into the workings of a tireless and brilliant mind. Chang’s Shrimp and Grits may have started out in Low Country (Anson Mills grits) but he sent them to finishing school in Japan (ramen broth, a touch of soy), creating a flavor-packed dish of which he says, “I imagined what it would be like if my ancestors had ended up in Charleston, South Carolina…I imagined a Japanese cook making grits — you know he’d boil it in dashi and season it with soy.” It is with this dish that Chang “decided — or accepted — that if we reached past our ‘tradition’ to create the truest and best version…what we were doing wasn’t bullshit…this is the dish that allowed us — or me, certainly — to really look outward and onward.”  If you’re worried he is taking himself too seriously, Chang’s simple directions for this recipe begin: “Assuming you have the foresight to do so, combine the water and grits and let the grits soak overnight…If you didn’t, soak the grits...”

Grits are a staple for the authors of Simple Fresh Southern, which is filled with other regional essentials, including pickles, iced teas, and potent cocktails with names like Applejack Punch, Lowcountry Pousse-Rapiere, and Hummers. In the introduction, Matt and Ted declare that “simple and fresh is the direction all southern home cooking is headed” and introduce us to Shrimp and Deviled-Egg Salad Rolls by explaining how they were reading through The New Fairyland Cookbook, published in 1964, and found a recipe for “Shrimp and Deviled Egg Casserole.”  They continue to tell us in four long paragraphs how the “wild and far-out” original recipe calls for deviled eggs, cheese sauce studded with whole shrimp and spiked with ketchup served over “canned Chinese noodles that have been heated in a slow oven.” To their credit, and in typical Lee brothers fashion, they managed to come up with a lighter dish, this time using farm-fresh eggs, local shrimp, and a “tonic squeeze of lemon.”  Their enthusiasm for this simple regional cooking gives us other inspired recipes that “arose from a meditation” or “hit like a bolt of lightning.”

As much as I love the work of Matt and Ted and admire their fierce promotion of local foodways, I did not find these recipes, as a whole, “fresh.”  The new book is predictably divided into Cocktails and Coolers, Snacks and Appetizers, Salads and Cold Sides, and ends with Desserts. Of the recipes I tried, including pickles, pimento cheese gratin, mushroom and okra purloo and buttermilk pudding cakes, I found the measurements lacking in precision, and I did not find the “knockout dishes” touted in the subtitle. Granted, I had advanced uncorrected proofs (for both books). But what the Lee brothers offered in their first great Southern Cookbook — relevant stories and coveted recipes, including an excellent and unconventional recipe (they add tomatillos to the gravy) for Shrimp and Grits — they were not able to replicate here.

Matt and Ted serve as goodwill ambassadors, spreading their belief that “southern cooking is a living art.” Where they shine is in finding and creating unusual and fun recipes like a vodka cocktail called Purple Jesus and 9 ways with buttermilk fresh cheese. They are, as they appear on the cover, the perfect hosts for an afternoon of fun and simple fare. And their cookbook is suited to the enthusiastic beginner home cook looking for both quick and easy recipes and ways to add southern flavor to their repertoire.

Despite the differences, both cookbooks are about the flavors of home and a distinct sense of place, both geographical and imaginary. If I want a taste of the South and am hosting a get-together, the Lee brothers are delightful guides, offering up fresh ginger lemonade, oyster cocktails, and easy ambrosia. However, as a dilettante in the kitchen, I want to excite my palate and nurture my own naïveté; I want to retain that magical quality that keeps me from knowing just how unsuited I am for what I’m about to do, in which case, I’ll reach for Momofuku.

SueG October 26, 2009
Dana Joy said it first, and I will say, too, that I think that the review is fantastic. I have not seen either of these books, but I will check out both of them, and I will look for Kim Sunée's, also.

dana J. October 20, 2009
I just want to say that I am completely captivated by Ms. Sunée's writing style. I thoroughly enjoyed her review. I hope I enjoy the Momofuku cookbook half as much. (and I eagerly await it)

pierino October 17, 2009
As usual Ms. Sunée has it exactly right. I'm an admirer of chef Chang's style, and after chasing the Kogi truck in LA I'm ready for brussels sprouts with kim chee and bacon.