Today: A vegan, 5-ingredient treatment for asparagus with a sneaky way of bringing out its sweeter side. All you have to do is ignore the season, and all conventional wisdom. 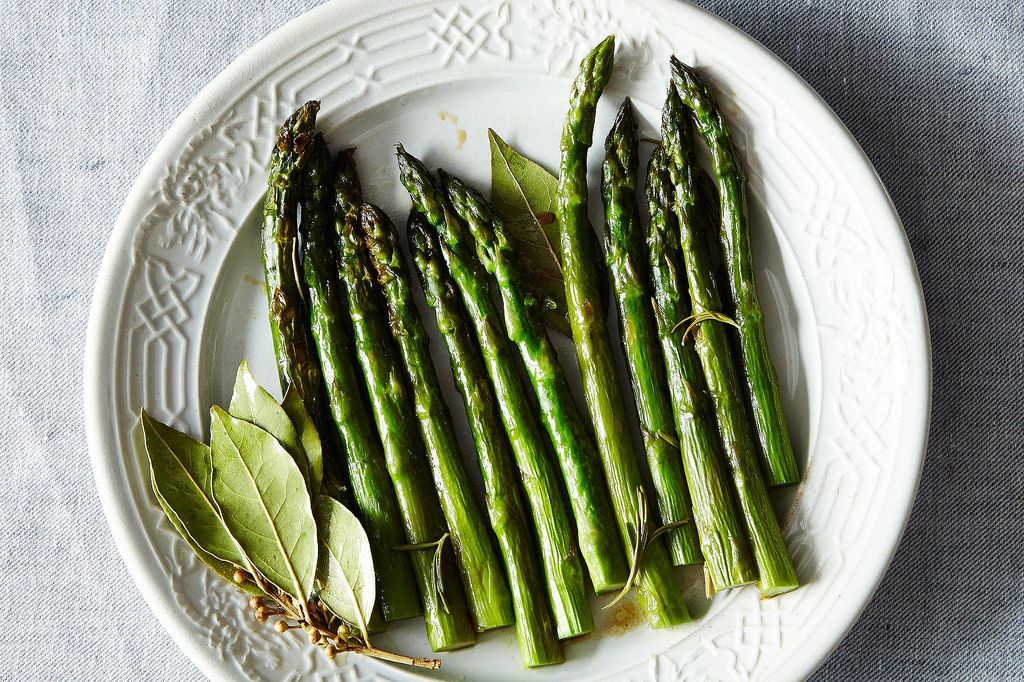 We think we should treat asparagus plainly -- it's the special spring flower we've been waiting for; we should let it taste as it does.

Because soon, the furious pop of new local spears will end, and our only options will be shipped in from faraway places, starchy and grim. So we grill or sauté or roast them with oil and salt, then, at most, put a little aioli or miso or egg on the side.

Patricia Wells has a better idea, one that amps up their natural sweetness in a rather sneaky way. "It’s such a sensual dish," Wells wrote to me. "Diners are always amazed at the complexity that arises from the combination as well as the cooking technique, which seems to truly lock in the essence of each ingredient." 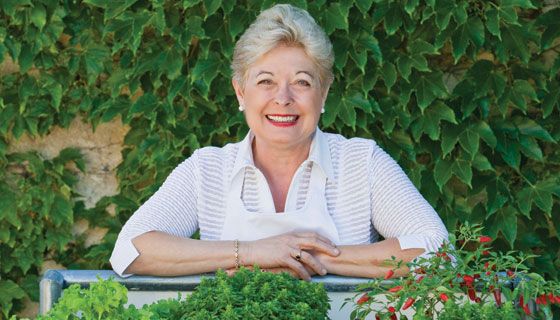 We've been lazy, assuming we should pair asparagus with tarragon and peas and budding chives, because they show up at the greenmarket together, hand in hand.

But Wells is here to teach us that it's rosemary and bay -- the meaty, earthy flavors we associate with winter -- that bring out asparagus' baby-faced side even more. Leather and lace belong together, like Stevie Nicks and Don Henley have been telling us all along. We appreciate sweet more in the presence of salty, bitter more in the presence of cream. Asparagus, as it turns out, comes into pure, grassy focus with a little resin at the edges.

(And, at least at my parents' house in Northern California, rosemary and bay are a year-round, bushy presence, so there's nothing stopping us from dragging them into spring. Go steal some from their yard -- they won't mind.) 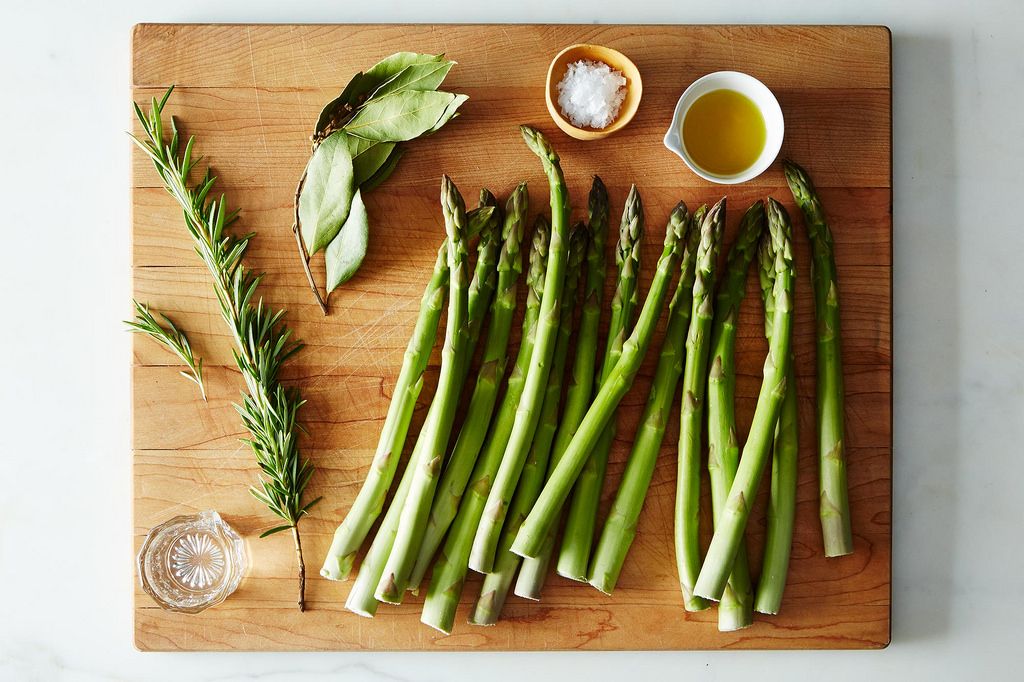 The only prep you have to do is go pick some bay and rosemary -- from the bush or from the fridge -- and wash and trim the asparagus.

Do as you do, but snapping isn't necessarily the answer -- asparagus seems to snap pretty arbitrarily, not at the precise spot where the dry, nubby portion ends and perfect asparagus begins. 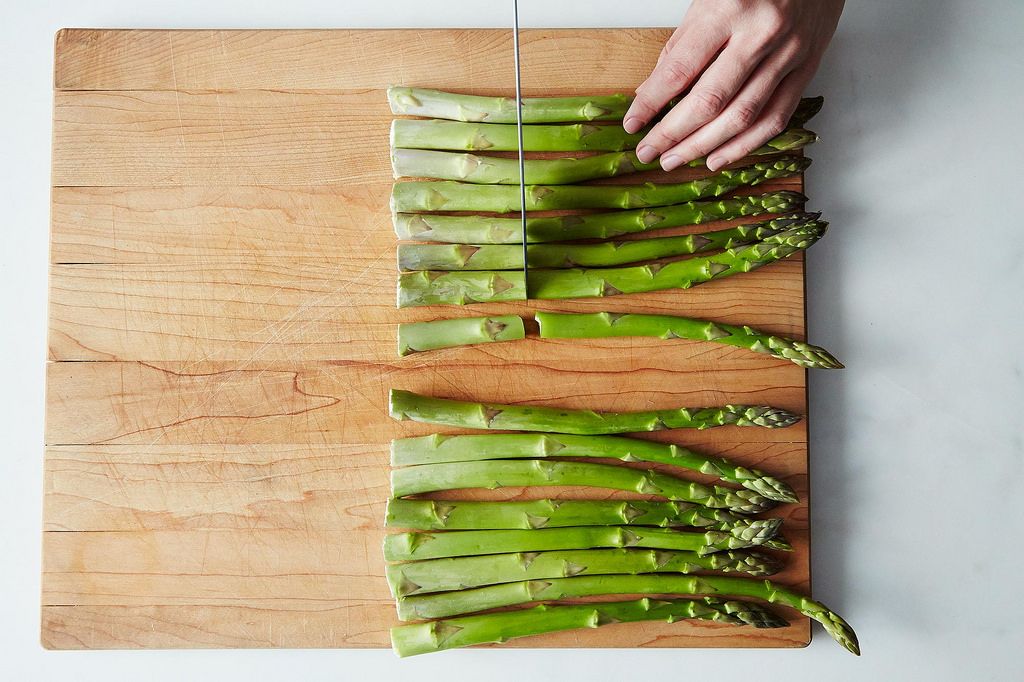 You're better off slicing the whole lot where the green coat starts to fade to white. If you're upset by the waste, simmer the bum ends into a puréed (and then strained), soup, or do as Harold McGee does and slice them into slim rounds for snacking or stir-frying -- the more fibrous ends aren't as noticeable when cut fine. 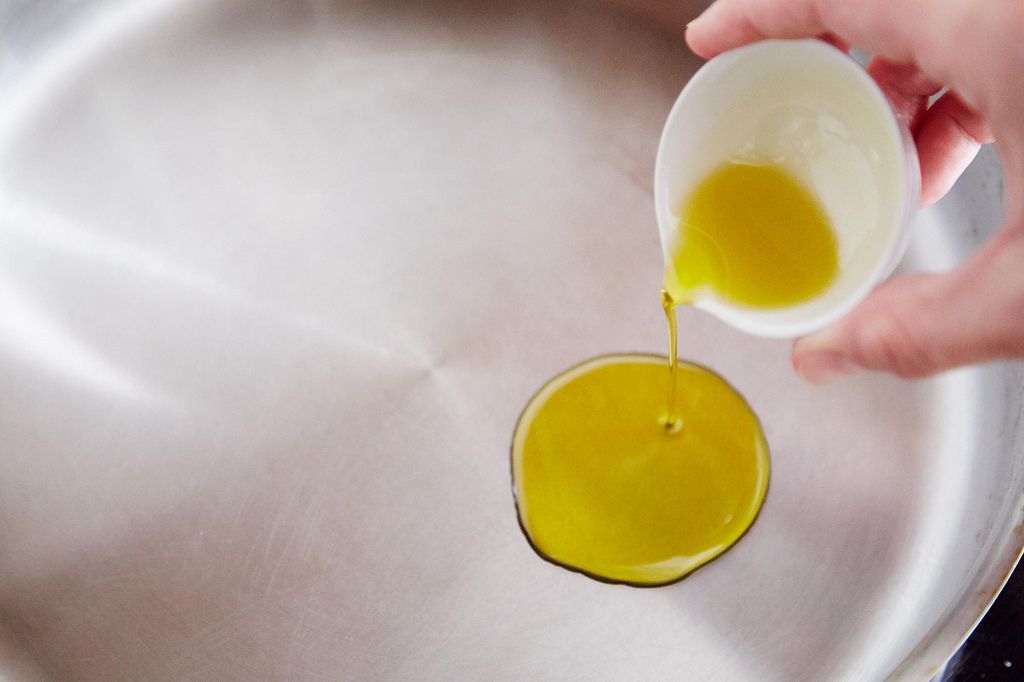 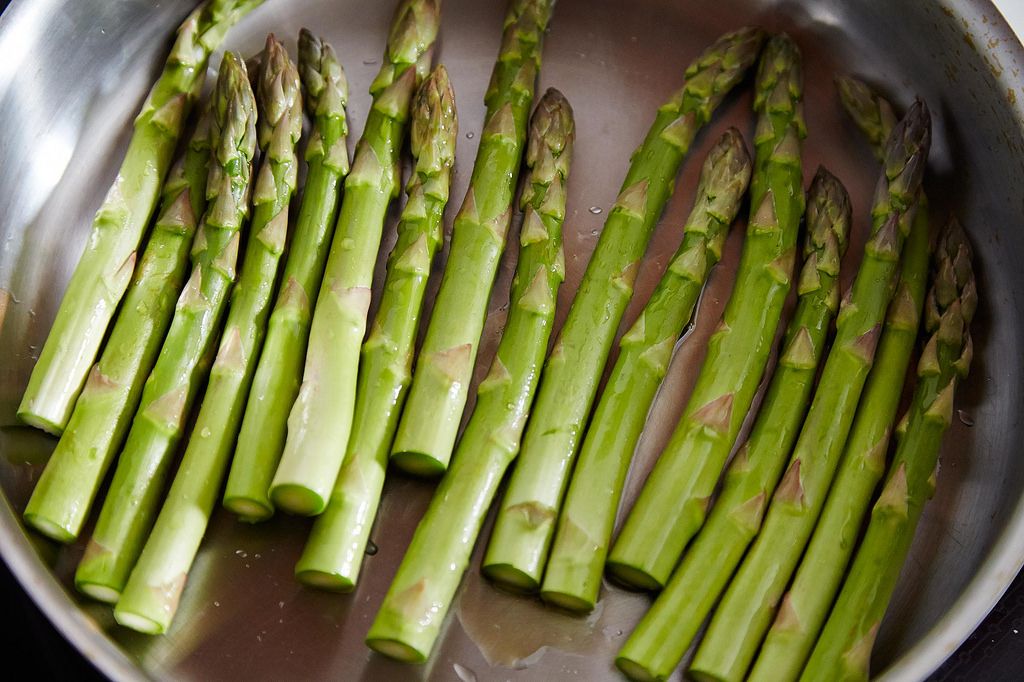 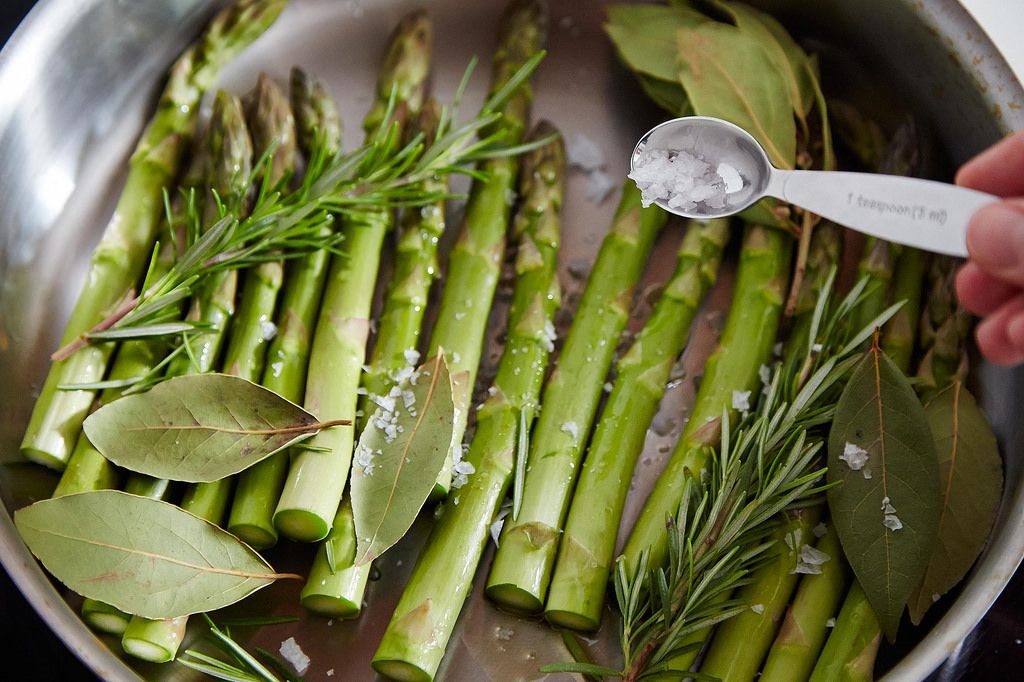 All 5 ingredients go into a pan together in a single layer, where they braise in splashes of water and olive oil -- the herbs set to making their own quick stock in the liquid, and the fat asparagus spears set to drinking it up. 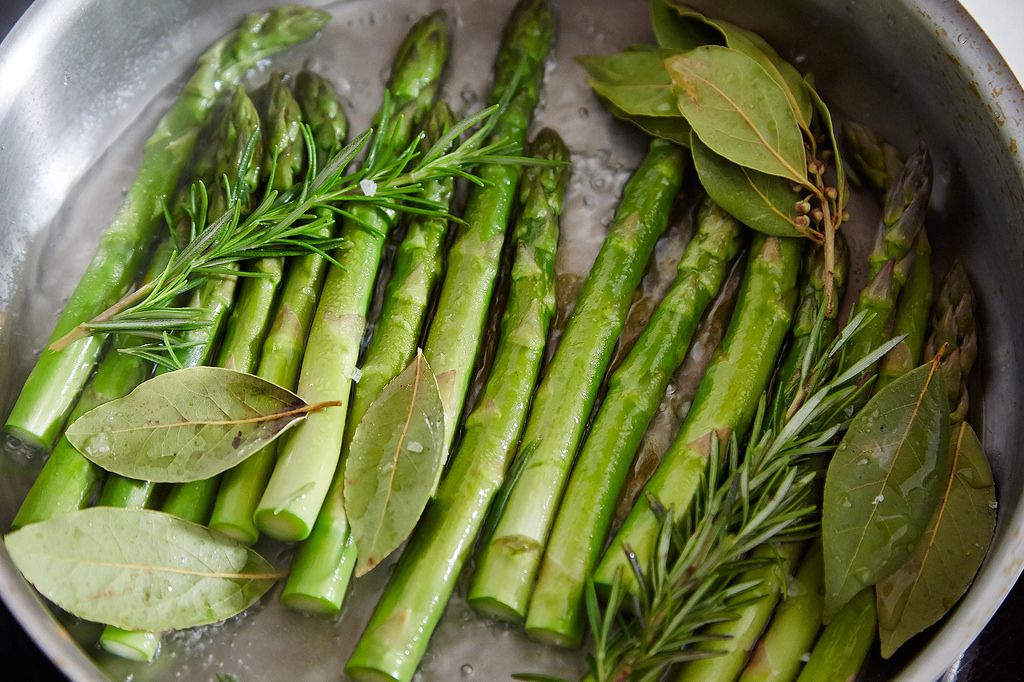 About 10 minutes later, when the spears are just slack and browned here and there, you're done. 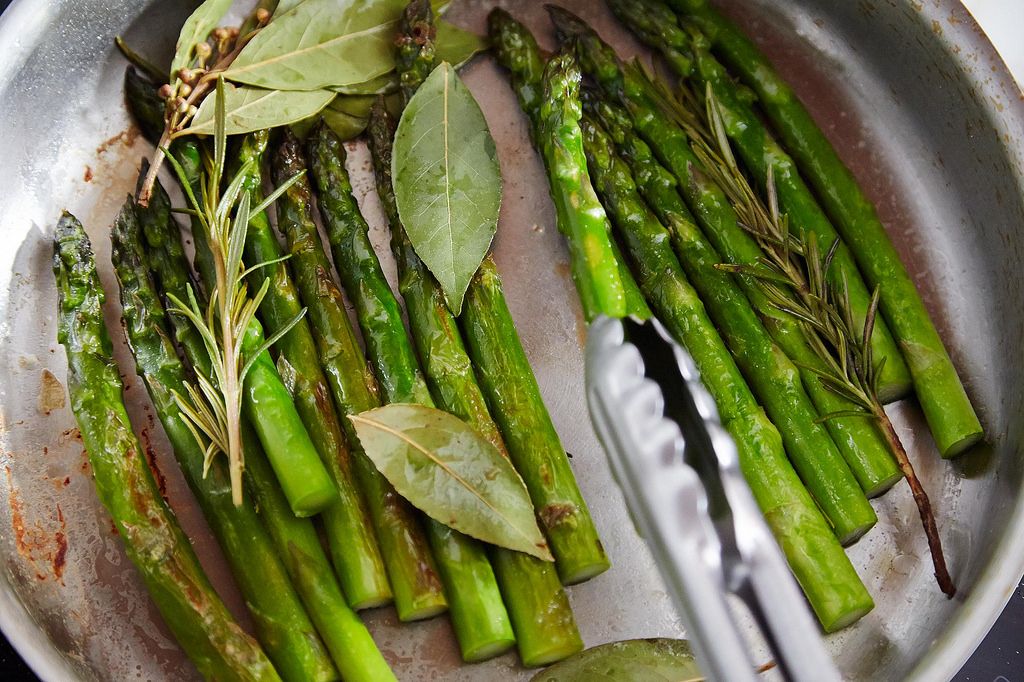 A note on garnish: No, you shouldn't eat the bay leaves, or probably even the burlier bits of rosemary. By plating your asparagus with them, you might be breaking some cardinal rule of garnishing. I don't know.

But rules should be broken, and those wintry flags are an ice breaker, and a pretty one at that. Of course, if you want to take people by surprise, leave the evidence in the pan. 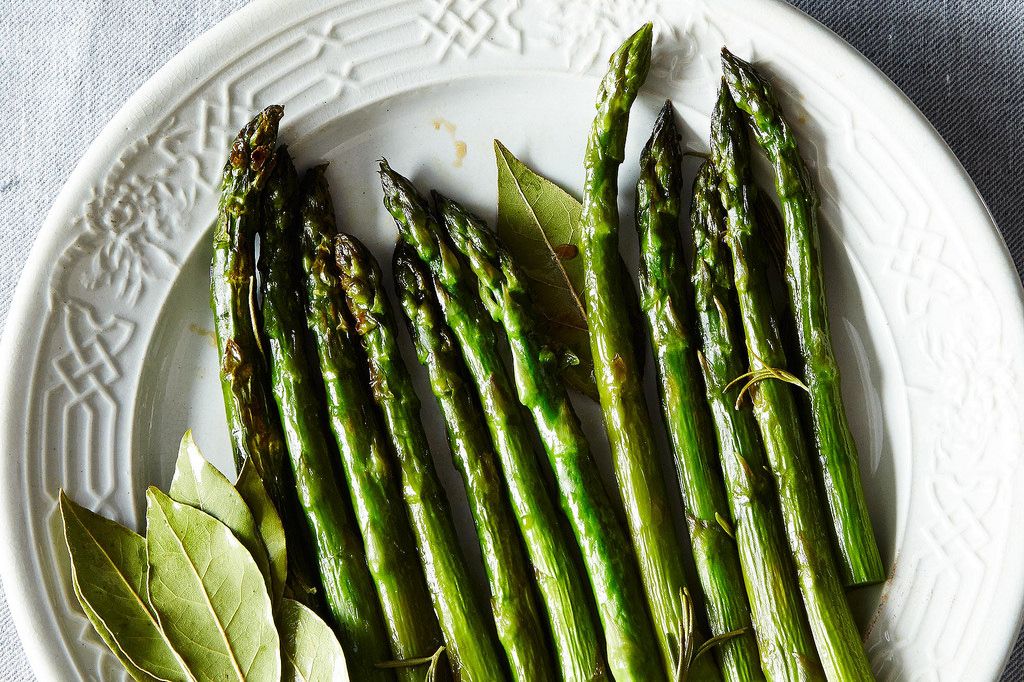 Adapted slightly from Vegetable Harvest: Vegetables at the Center of the Plate (William Morrow Cookbooks, 2007)

Shoham H. May 27, 2014
I Love Asparagus, i am doing my Asparagus with fresh chopped Garlic and olive oil in the oven.
mix chopped garlic with 3 spoons of olive oil , leave it to stand for 10 min and than brush the Asparagus , put in the oven for 15-20 min. and Enjoy

Joanne K. April 25, 2014
Made this last night with some salmon. Really wonderful, could have eaten my husbands too!

Elle April 24, 2014
I love asparagus and am always looking for new flavors to compliment them. I'm going to try this recipe with white asparagus as well as green to compare the flavors.
Thanks!
Elle

shelley K. April 23, 2014
Now that it's almost asparagus season, it is not necessary to throw so much of the spear away~! If you buy very fresh, you can use a vegetable peeler to peel just the outside of the lower third of the stalk.