Today: The one baking ingredient you should never be stingy with (and the blondies you'll become known for). 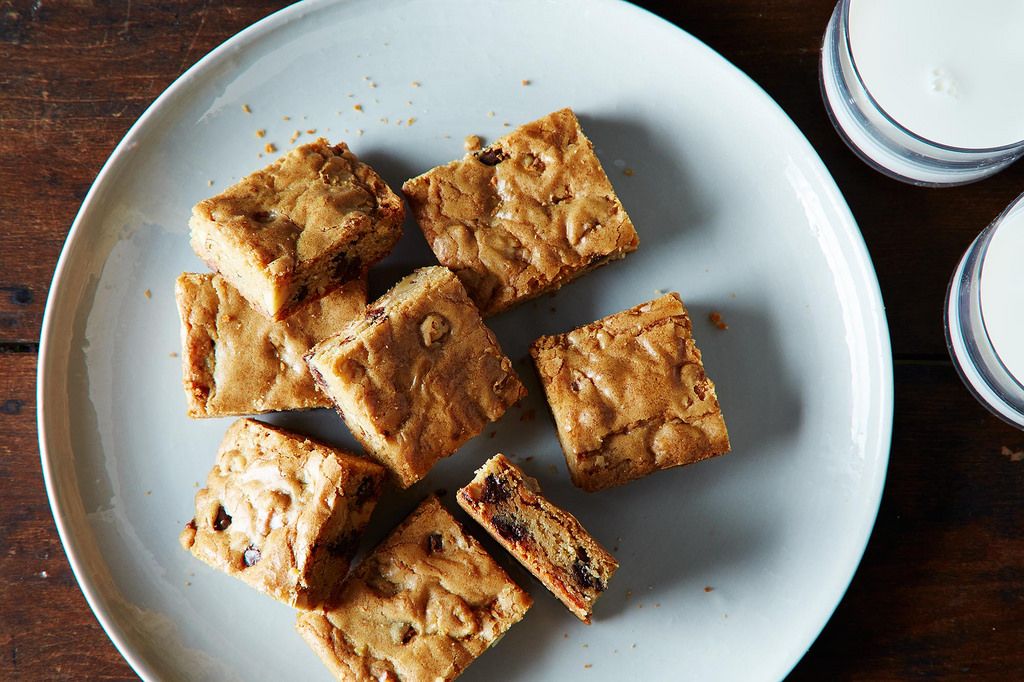 Blondies deserve better. They're not just a brownie that's timid on chocolate, nor are they a chocolate chip cookie whose dough we were too lazy to scoop. They shouldn't be an also-ran at the end of the bake sale, not something to settle for. 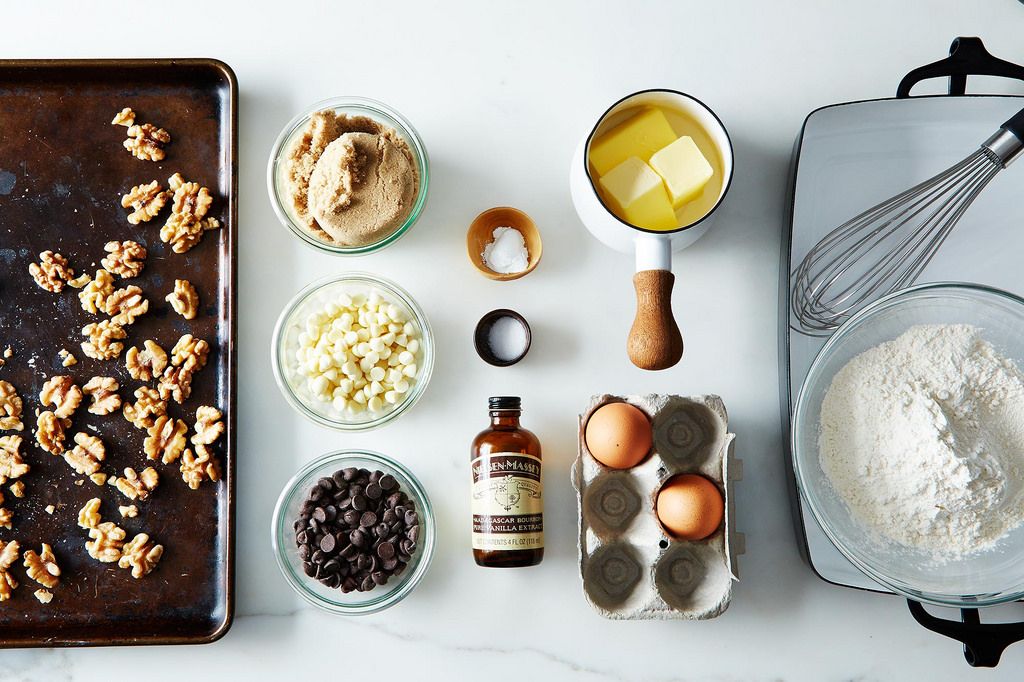 I know we've been burned by bad blondies before. But with a just-right recipe, they're an animal unto themselves, worthy of all the obsession more obvious treats command. One that -- once you've shared them with friends -- you'll be expected to tote to every picnic, potluck, and barbecue from here on out (just ask Sheri Warshaw, our Managing Editor Brette's mom, who turned us on to this recipe and has been stuck making them for us ever since).

You'll start to expect the same of yourself too -- if you go to the freezer and there isn't a stash of blondies in it, you will want someone to blame. It's you. 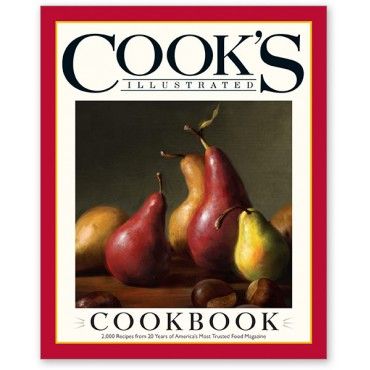 This particular just-right recipe comes from America's Test Kitchen and their famous perfectionism and rigor. As ever, they were relentless in dissecting what normally goes wrong in a stiff, cloying blondie, and reverse-engineered the standard to make it right. 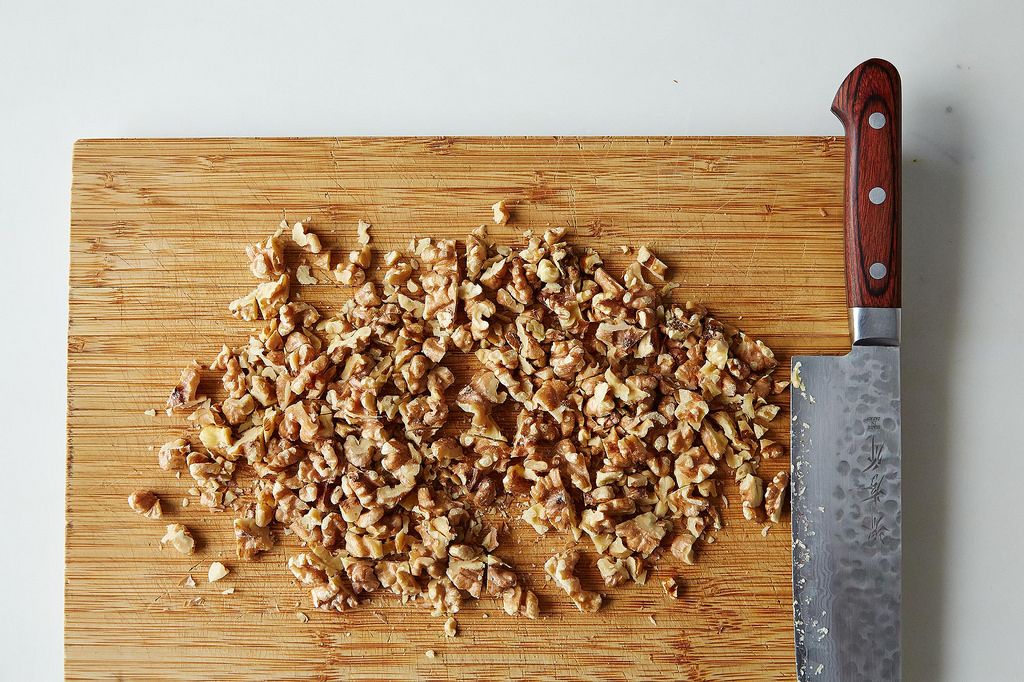 Their first act of genius was in de-cake-ifying them (my fake word, not theirs). Many of the qualities we don't want in a cake -- chew, heft, density -- are marks of a very good blondie. So they axed anything that would render it cake-like: they cut back on the butter and eggs, and melted the butter rather than creaming it, all of which would have otherwise made the whole operation fluffier. For sweetness, they went the butterscotch route: all brown sugar, plus salt to keep it in check. 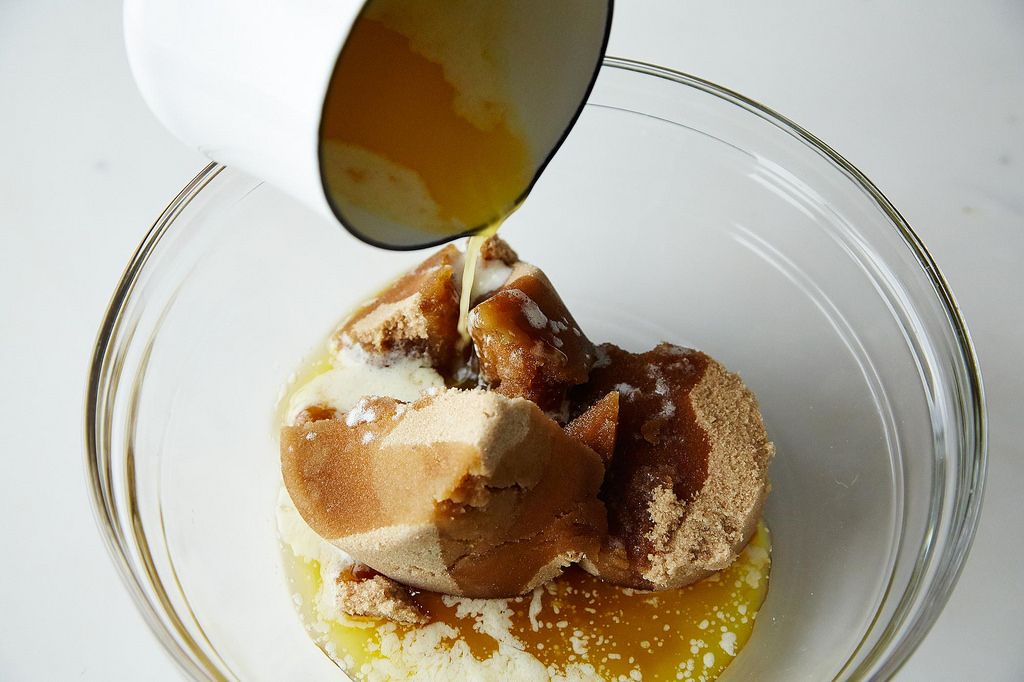 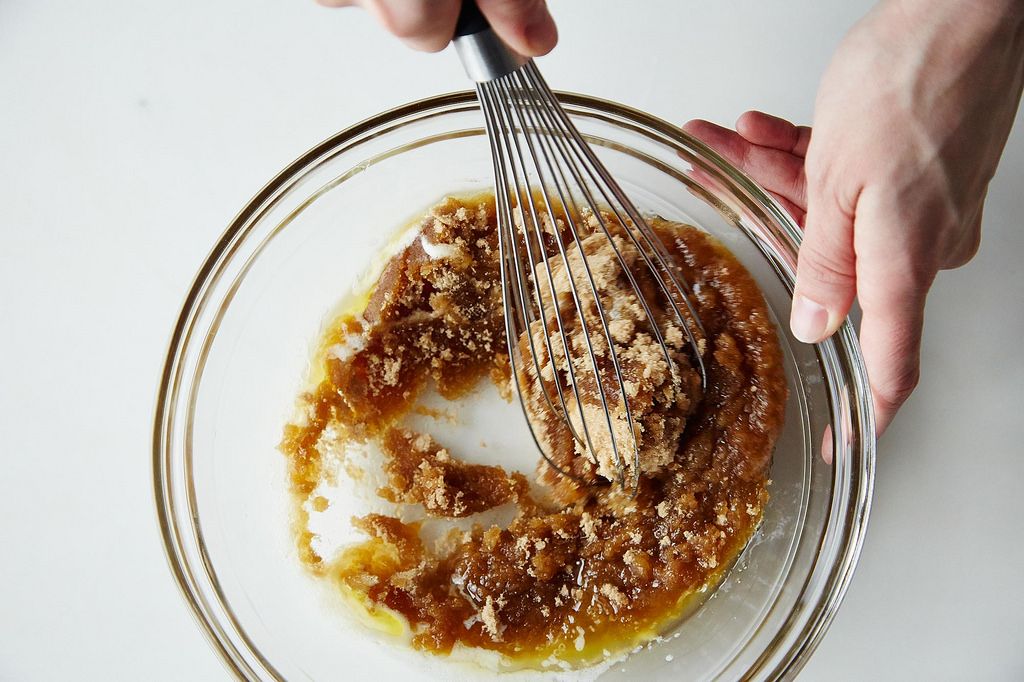 But the most surprising move was this: they quadrupled the vanilla extract. We think of vanilla as a volatile ingredient, like cayenne or salt -- all-but-impossible to correct once overdone. But it's harder to overdo it than you'd think.

More: 9 more recipes to celebrate vanilla from the Food52 community. 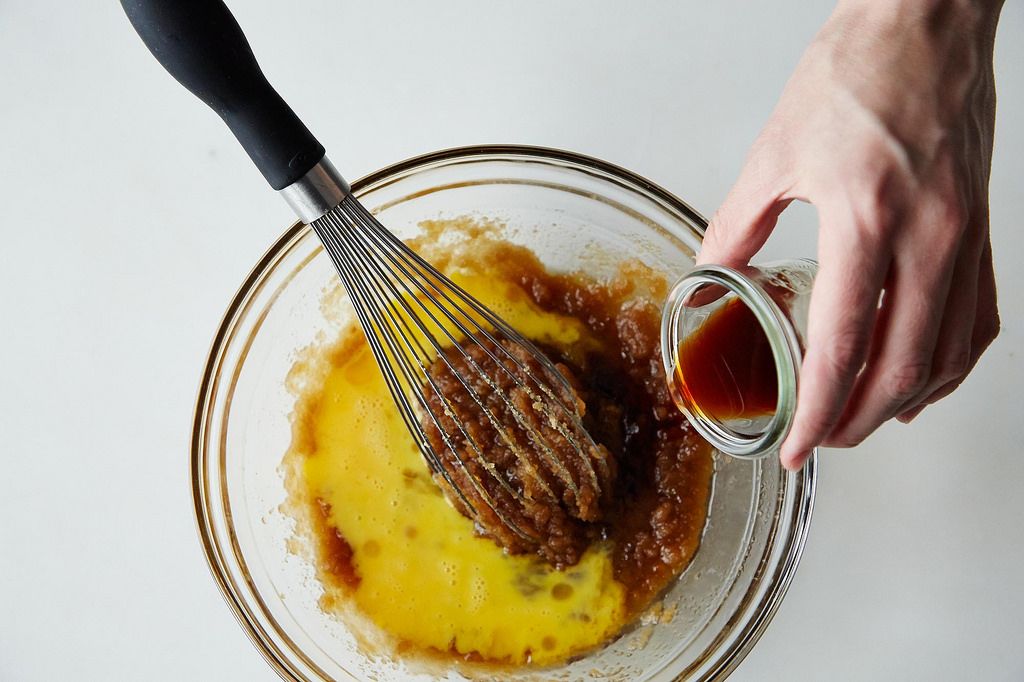 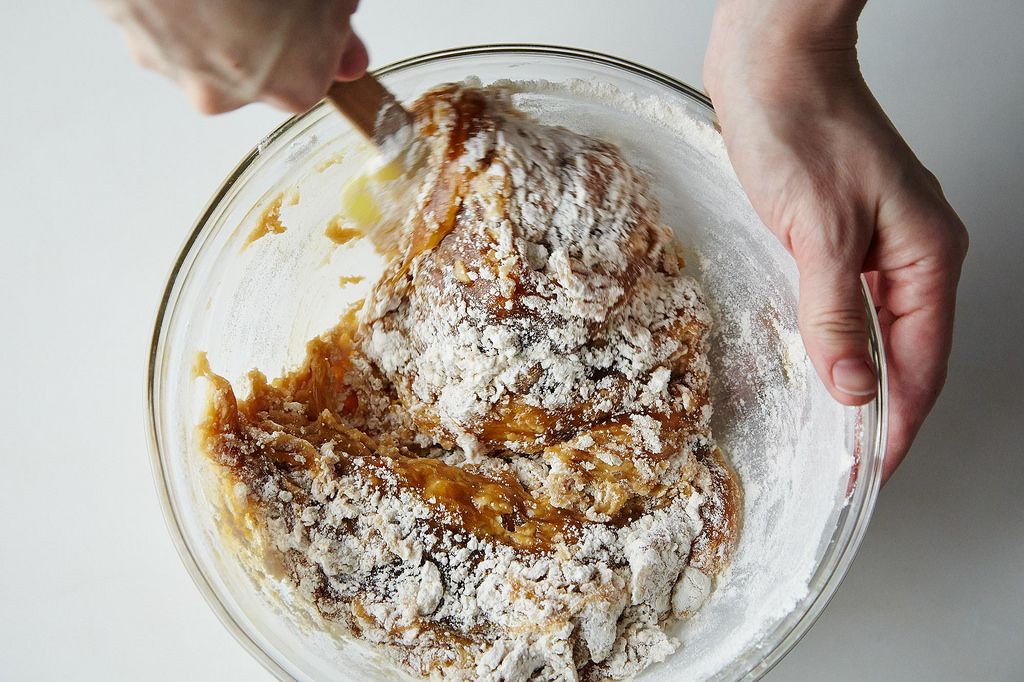 And there's a very good reason to overdo it, just a little. Once we stop putting a teaspoon into baking recipes because it's what we've always done, we can embrace vanilla as a flavor all its own -- complex, haunting, memorable. It's a bit like when you get the chance to actually taste a bay leaf, and realize how impressive it is once you strip away all the mirepoix and thyme and other things that we assume have to come along. 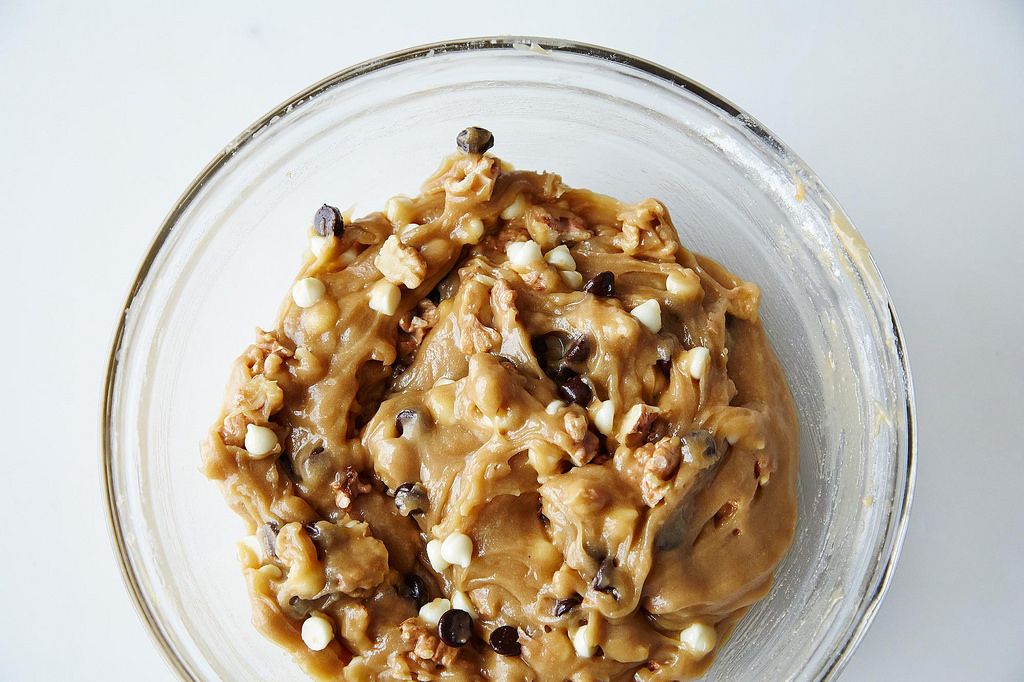 This revelation stands to change the way you bake: Brette now doubles the vanilla in most baking recipes, or just pours from the bottle -- depending on her mood. Yes, vanilla is expensive, but even this quad-strength recipe will still only set you back 4 teaspoons, and any non-artificial vanilla will do. 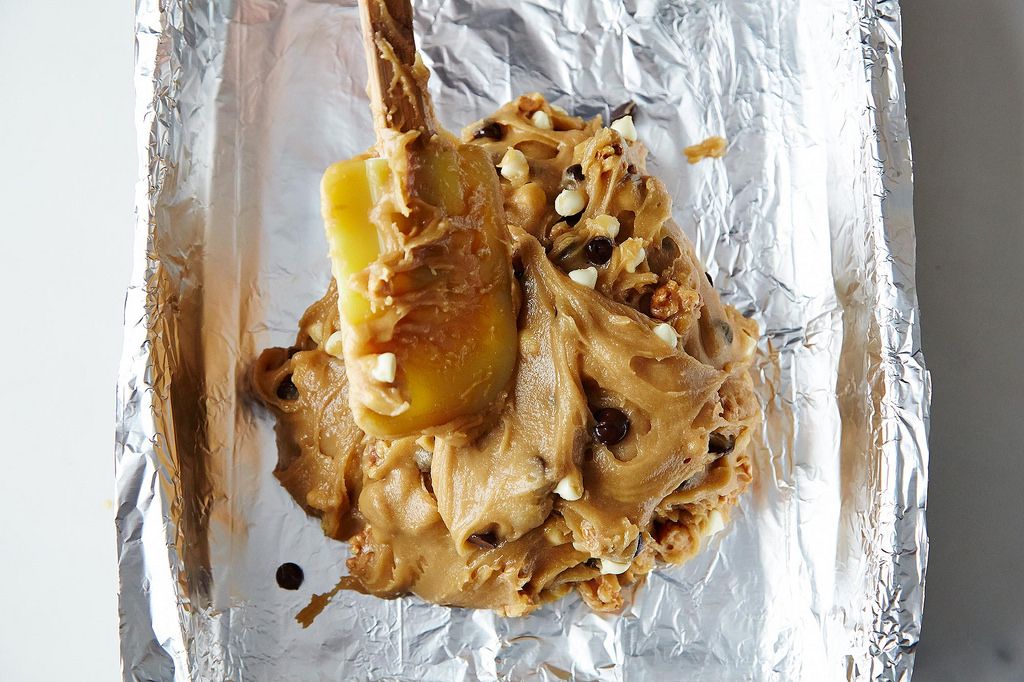 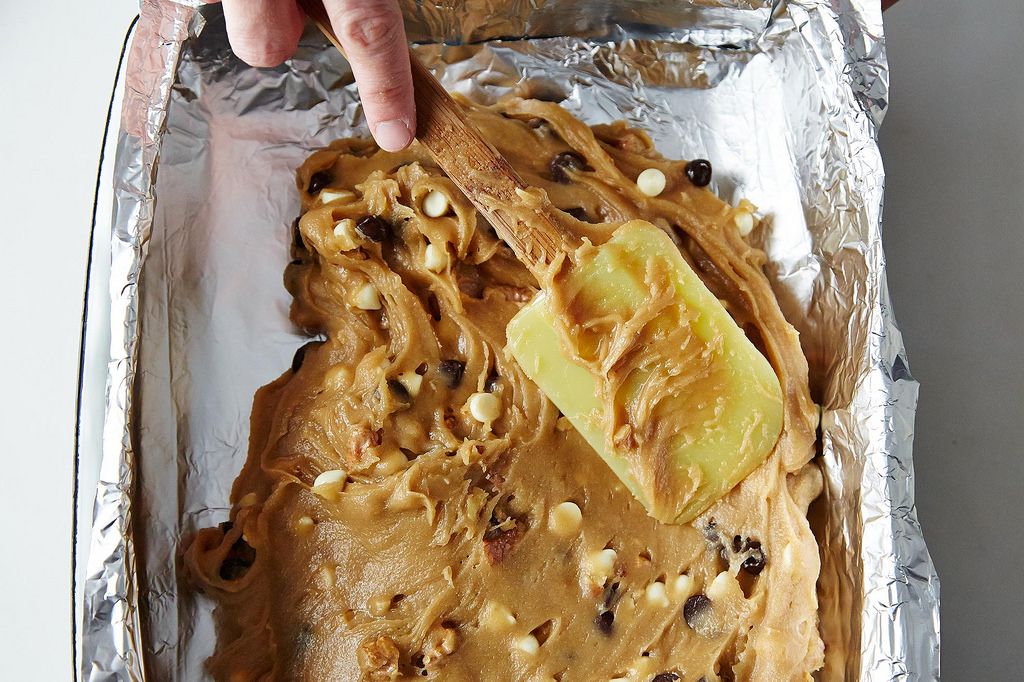 Brette first pitched me this tip in 2011. You might wonder why it took me so long, until you count up how many times she's brought me blondies to prove her point between now and then. 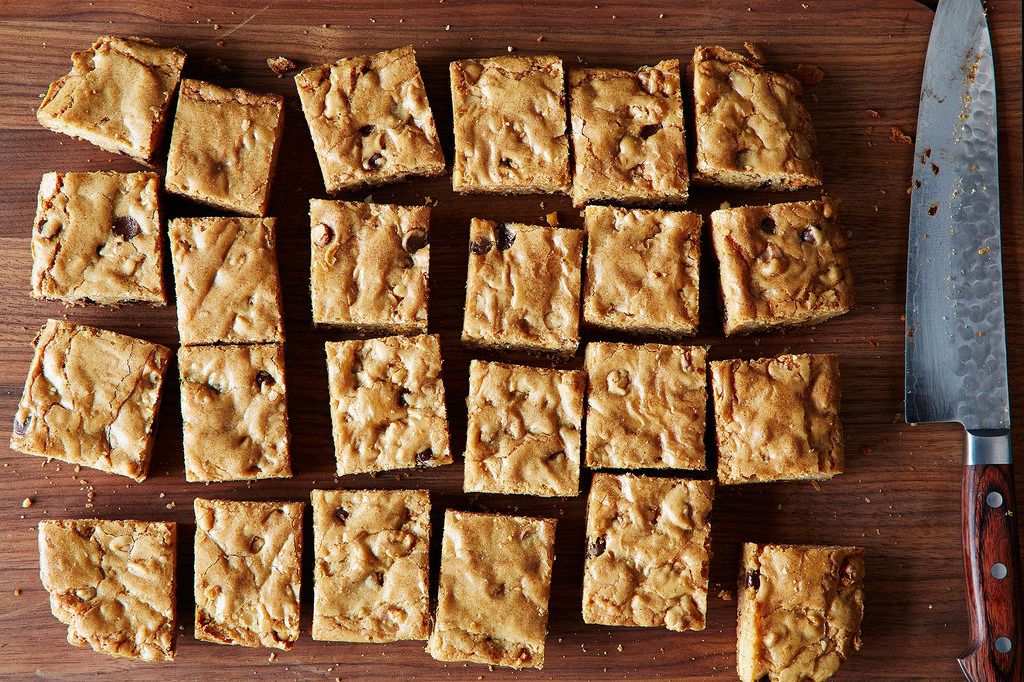 The Warshaws would also request that you err on the side of under-baking them -- 22 minutes is the magic number for them (the ones pictured are a little overdone by their standards, and they're right, unless you like them especially chewy -- I'm sorry, Sheri!). One final Warshaw tip: these make very good ice cream sandwiches. With vanilla ice cream, obviously. 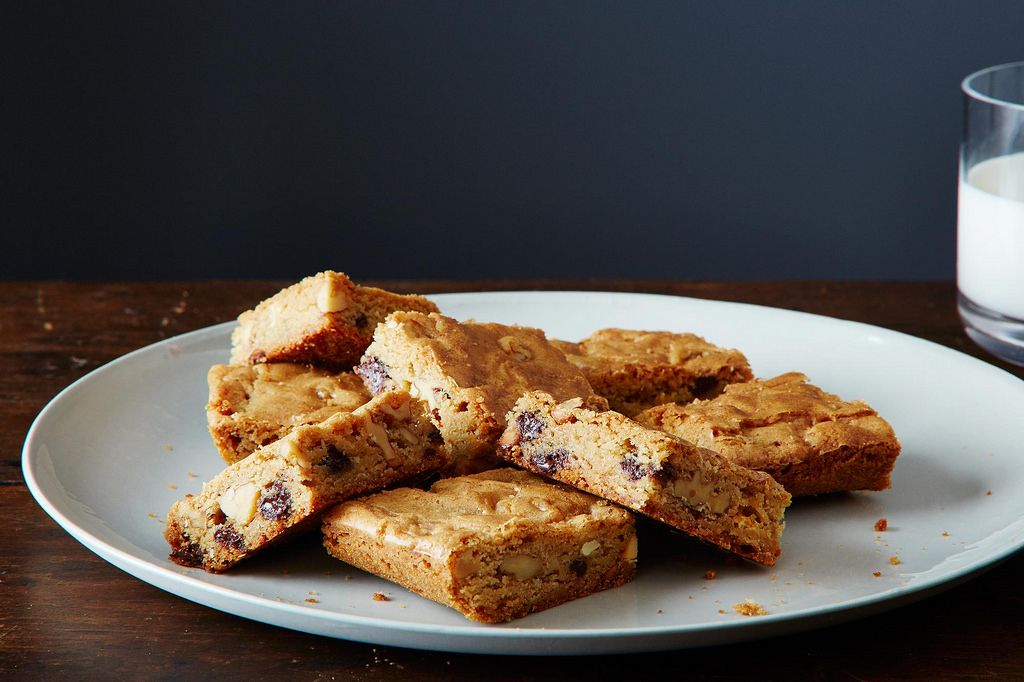 FrugalCat February 8, 2019
Great recipe. I use walnuts and butterscotch chips.

Danez August 27, 2017
These were delicious. Followed the instructions to the letter except I omitted any nuts. Exactly 22 minutes of baking worked for me. The texture was perfect. They were slightly chewy, but certainly did not taste underdone or too dense. They were not cakey, tough or hard. I used the combination of semisweet and white chocolate chips (Ghiradelli brand). Company loved them and said they were the best Congo Bar/Blondie they ever had. As suggested, we served them up side of French Vanilla ice cream. A keeper. Thank you!

Fran S. March 2, 2015
I am a seventy and "obsessed" with trying new recipes almost every day! My husband always comments that he is never quite sure what he will be eating on any given day, and is my biggest fan! I am always checking recipes in newspapers, books and on computer websites.
I am going to start using more vanilla as you have suggested in this article, and though I have always used more than recipes call for, have never done the four times amount! I am also going to try this recipe with the white and chocolate chip combo and pecans.
I have made a recipe of White Chocolate and Cranberry Blondies for several years with white chocolate, toasted almonds, dried cranberries, and fresh/frozen cranberries pressed into the batter before baking. The fresh/frozen cranberries add that element of tartness against the sweetness of the chocolate. When the blondies are baked and cooled, I drizzle melted chocolate over…and are SO addicting!
I wanted to share this with you... I think the recipe I use is a variation of one that Starbuck's used or uses.
Fran Schack
Formerly of Calgary, Alberta, Canada and now living in Mosgiel, New Zealand

Kristen M. March 2, 2015
Welcome Fran! I think a little tartness from fresh cranberries sounds like a brilliant idea in blondies, and very pretty too.

danielle December 11, 2014
I've made these a bunch for parties and they're a great hit! i'm thinking about doing them with white chocolate chips, Craisins, and pistachios for christmas...thoughts?

sonya December 21, 2014
@ Danielle, that sounds delicious! Have you tried the Cook's Illustrated recommended brand of white chocolate chips, Choc-Au-Lait? They are REALLY good :)

Dusanka June 2, 2014
I've made these twice now in the last two weeks and have a request to make them again soon. As in the next week... The first time I made them was for a school bake sale. I omitted the nuts (nut free school), added a small amount of extra chocolate chips. I made them slightly thicker than in the photo here, and baked them for exactly 25 minutes. So that the kids wouldn't think that they were going brownie's poor cousin, I sent them with a note that they were "raw chocolate chip cookie dough squares" and they sold out. Love this recipe. It'll be in regular rotation.

JoyJoy June 1, 2014
Made these with all chocolate chips (no white choc). Very vanilla-y. This is a thinner blondie than I typically make (this recipe: http://www.marthastewart.com/336484/blondies-with-chocolate-chips-and-walnut), and I tend to like the thicker version better.

Ellen May 31, 2014
It's so true that you can add lots more vanilla than you think. I made America's Test Kitchen Slow Cooker Revolution's chocolate hazelnut bread pudding. It was early morning and I didn't have my glasses on. I messed up and put in tablespoons instead of teaspoons of vanilla, and was sure I had ruined it. It was delicious and won first place in a dessert cookoff later that day!

kasia S. May 24, 2014
Time to get more vanilla, I might make these tomorrow as I'm heading to my organic store for a baking supply shopping trip.

These look chewy with a nice character, thank you for posting this, I've collected Cooks Illustrated for years and don't recall this one, so yay!

witloof May 22, 2014
Not only do I routinely add extra vanilla to everything, I use homemade vanilla sugar {stick a vanilla bean or three into a jar of sugar and let it sit for a week, replenish as you go} in my baked goods. The scent is so delicious.

petrini.elisa May 21, 2014
i'd asked this on the full recipe page, but it looks like this more the place!

i have two questions:
1) is there any reason why i can't cut this recipe in half? two adults don't need so many blondes, waistline-wise--i know they'll be irresistible.
2) why go so crazy (and be so wasteful) with the foil? you can cover the bottom and sides of the pan with easily with 1 wide sheet of foil? why use 2

Kristen M. May 21, 2014
Elisa, I believe you should be able to halve the recipe but I haven't tried it -- an 8x8 pan should be pretty close to half the size (though they'll be a little thinner, so you might need to pull them out of the oven earlier).

As for foil, one sheet of foil (or parchment), with enough overhang to grab and lift the blondies out of the pan for slicing should suffice.

sonya December 21, 2014
Elisa, I just divided the recipe by two today (I used an 8" square pan, but an 8" round also works) and it turned out great! I also only used one sheet of foil and it worked just fine like you thought!

hardlikearmour May 21, 2014
The congo bar version of these is my favorite. The key is to get the coconut nice and toasted, so the nutty coconut flavor is prominent in the final bars.

Pamela S. May 21, 2014
This is exactly like my Mom's recipe from the 50's. We have always loved it. The only difference was the chips weren't mixed it, they were sprinkled on top. I double the recipe I have and bake them in a 12x20x1" pan. Yummmmm!

karpenko May 21, 2014
No problem at all making them without the nuts. A lot of kids don't like nuts in cakes and these are terrific with or without.

Lindsay-Jean H. May 21, 2014
I have never been tempted to make or eat blondies until now.

tinasquirrel May 21, 2014
Blondies are the favorite treat here in our house. My 11yo does not like chocolate however and we make them plain, no chocolate, no nuts. I made them with chocolate chips last time because of guests, and everyone agreed that the "nothing" version was the best! I have to say though that a previous commenter's version with roasted salted cashews sounds divine!