How to Make Homemade Mallomars

Today: Stop hoarding your Mallomars. Carey Nershi of Reclaiming Provincial is showing us how to make New York's rarest cookie, whenever and wherever you want them. 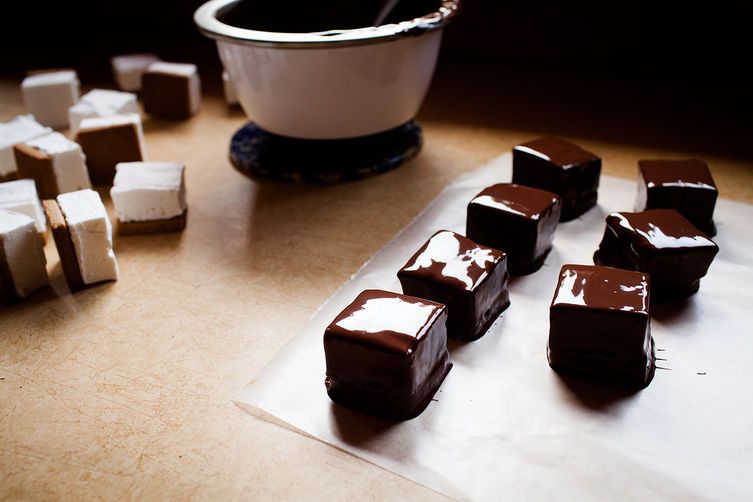 Graham crackers. Marshmallows. Chocolate. It's the holy trinity of sweets. Most of us know this combination as everyone’s favorite campfire snack, the s’more -- but there's a lesser-known version comprised of a marshmallow atop a graham cracker and enrobed in chocolate. This, my friends, is the Mallomar.

If you haven’t heard of Mallomars before, it’s probably because their availability is limited. They appear on store shelves in the fall only to vanish come spring. I grew up in New York, where apparently the vast majority of them are sold, and had no idea until recently that they were relatively unknown and difficult to find outside the state. That, dare I say, is a serious injustice. If you live in North Dakota, you should be able to enjoy a Mallomar. If you want a Mallomar in the middle of July, then, dang it, you should be able to have one. Guess what? You totally can. 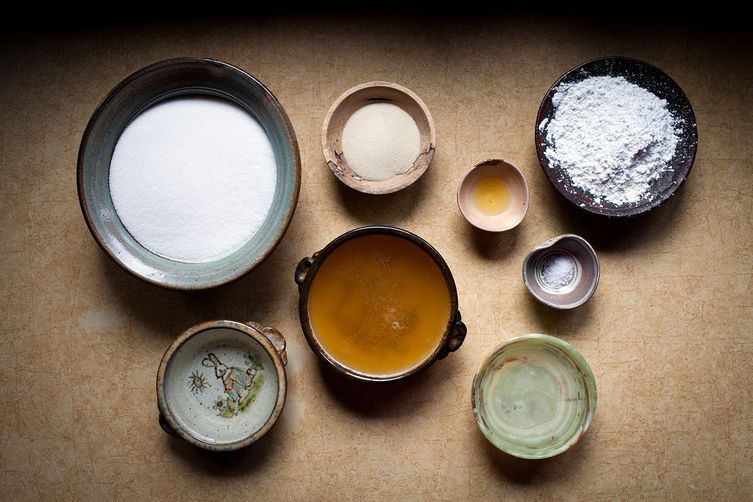 This recipe has a number of steps and may seem intimidating, but it’s actually quite simple as far as homemade marshmallows and melted chocolate go. Don’t have a candy thermometer? No problem. This marshmallow recipe (which is barely adapted from Alton Brown) sets up nicely and you don't even have to worry about heating the sugar to exactly the right temperature. I also don’t bother with tempering the chocolate, as the excess powdered sugar on the marshmallows can make the chocolate coating look less than perfect anyhow.

These aren’t round like the store-bought versions, but you can probably imagine how annoying it is to pipe cooling marshmallow fluff onto little cookies, right? No, thank you. Square is where it’s at. Their shape may be a bit wonky, but it’s a charming, imperfect wonkiness. And they’re just as delicious.

For the graham crackers

For the final assembly

Combine the gelatin and half of the water in the bowl of a stand mixer. In a small, heavy-bottomed saucepan, combine the granulated sugar, syrup, salt, and the remaining 1/2 cup of water. Cover and let cook over medium-high heat for around 4 minutes. Uncover and continue to cook for another 6 to 7 minutes, or until the mixture begins to bubble vigorously and rise in the pan. (If you have a candy thermometer, clip it to the side when you uncover the pan and cook the mixture to 240° F.) Immediately remove from heat. 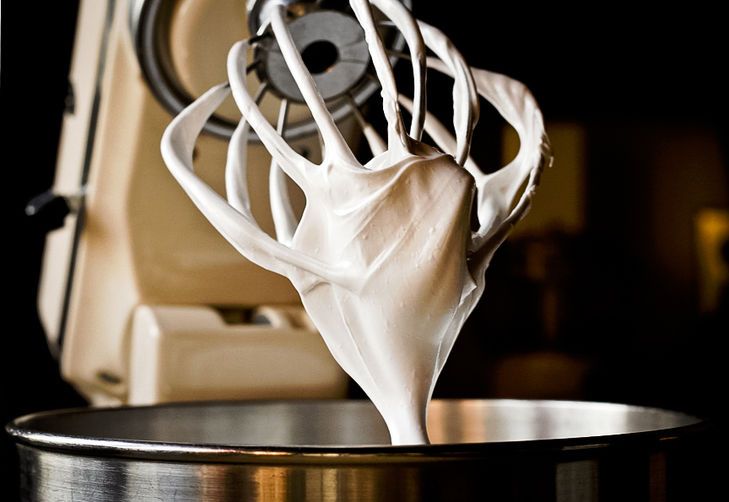 Attach the whisk attachment to your mixer and turn on low speed. Slowly pour the hot sugar syrup down the side of the mixing bowl and into the gelatin mixture. Once you’ve added all the syrup, increase the speed to high and whip until the mixture is lukewarm, approximately 12 to 15 minutes. (If you haven’t cooked the sugar to exactly 240° F, this may take a few minutes longer. You can tell that it’s cool enough if the fluff doesn’t easily slip away from the whisk when the mixer head is lifted.) Add the vanilla extract in the last minute of whipping.

While the mixture is whipping, combine the confectioner's sugar and the cornstarch in a bowl. Lightly grease a 9 x 13-inch baking pan, then add the sugar-cornstarch mixture and shake it all around to coat the pan completely. Return the excess to the bowl. 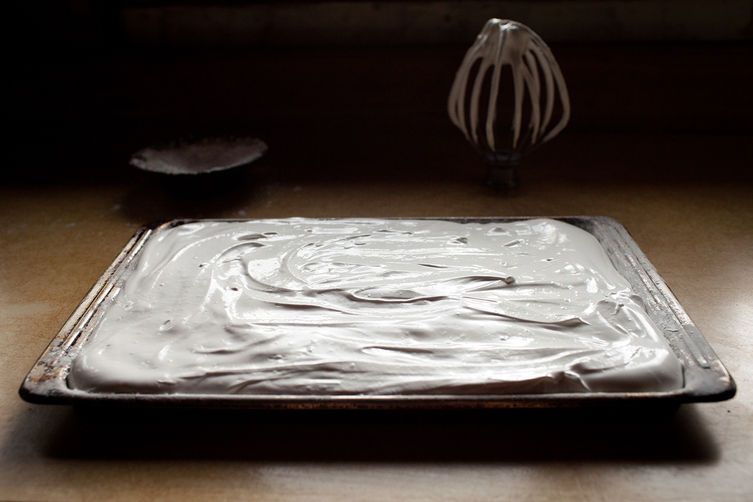 When the marshmallow mixture is ready, pour it into the prepared pan, using a lightly oiled spatula to smooth it out. Dust the top with some of the remaining sugar-cornstarch mixture and let the marshmallows sit uncovered for at least 4 hours, or overnight.

Once set, cut the marshmallows into 1 1/2-inch squares. (If you won’t be using them right away, toss them in the remaining sugar-cornstarch mixture and store them in an airtight container.) 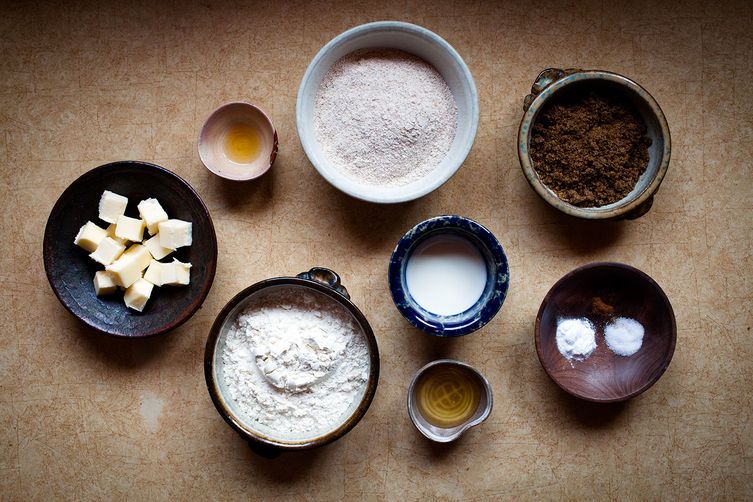 Whisk together the flours, baking soda, salt, and spices. 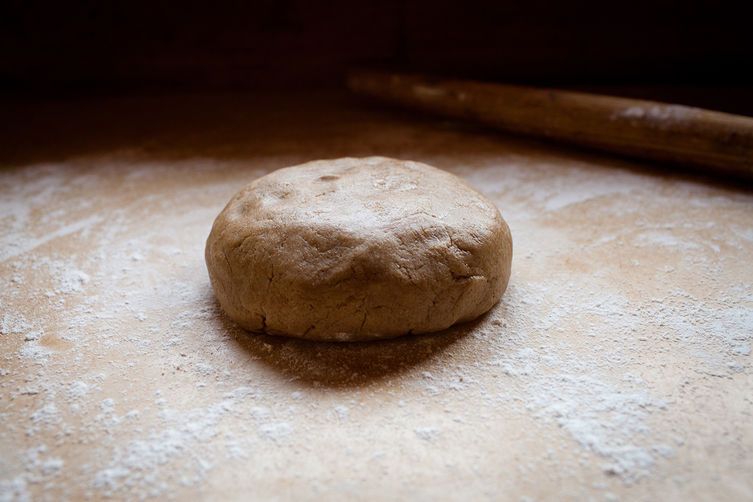 Cream together the butter, sugar, and honey and then beat in the vanilla. Alternate beating in the milk and flour mixtures until everything is combined. 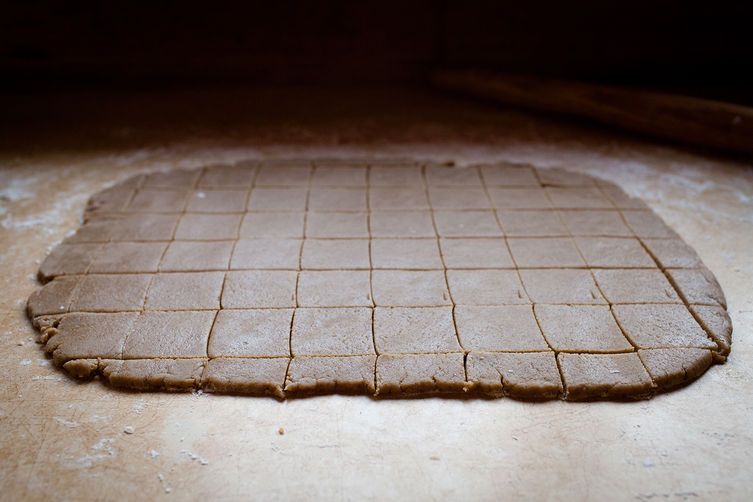 Line two baking sheets with parchment or silpats. Roll the dough out on a lightly floured surface to 1/4-inch thickness, and then cut into 1 1/2-inch squares. Transfer squares to the baking sheet, leaving an inch of space between each. Poke several holes in each square to keep them from puffing up too much during baking. Place the crackers in the fridge to chill for at least 30 minutes. 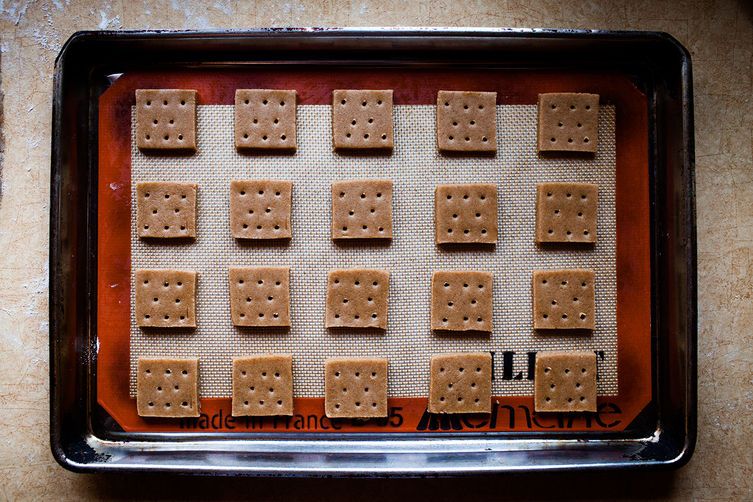 While the crackers chill, preheat the oven to 350° F. Bake for 12 to 14 minutes, or until the crackers are mostly baked but still a tiny bit soft. They will firm up as they cool. 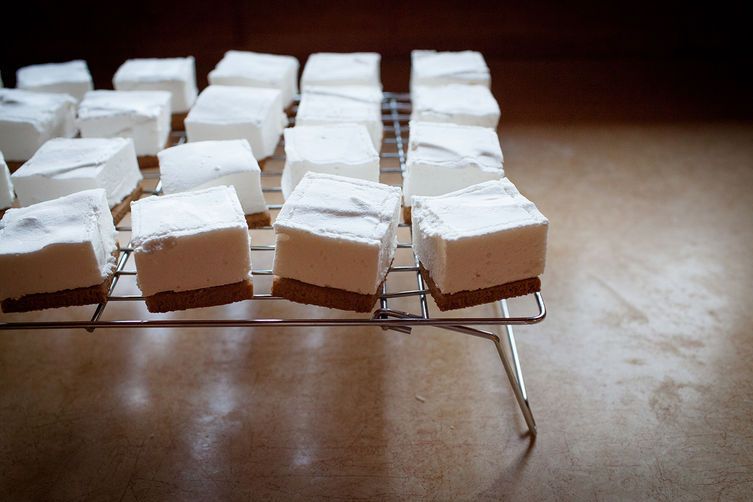 Remove the pans from the oven and set on cooling racks. Immediately place a marshmallow on top of each cracker. (The heat from the crackers will melt the marshmallow slightly and bind the two together.) Let cool completely. 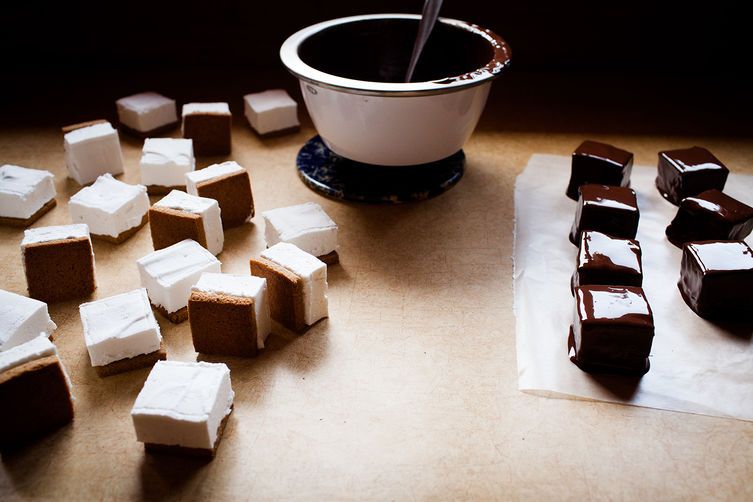 Melt the chocolate in a double boiler until smooth. One by one, dip each marshmallow-topped cracker in the chocolate, making sure to coat all sides.

Use a fork to remove the mallomar, allowing any excess chocolate to drip off, and place it, cracker side-down, on a piece of wax paper. Let cool until chocolate has set. 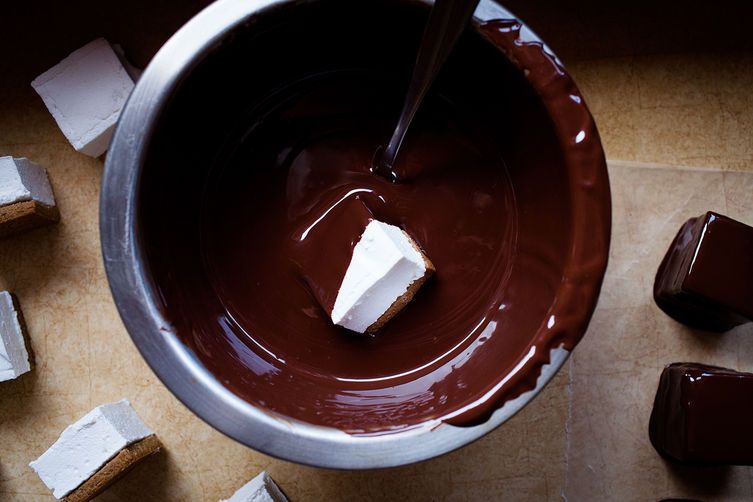 Store the Mallomars at room temperature for 3 days, or in the fridge for up to 1 week. 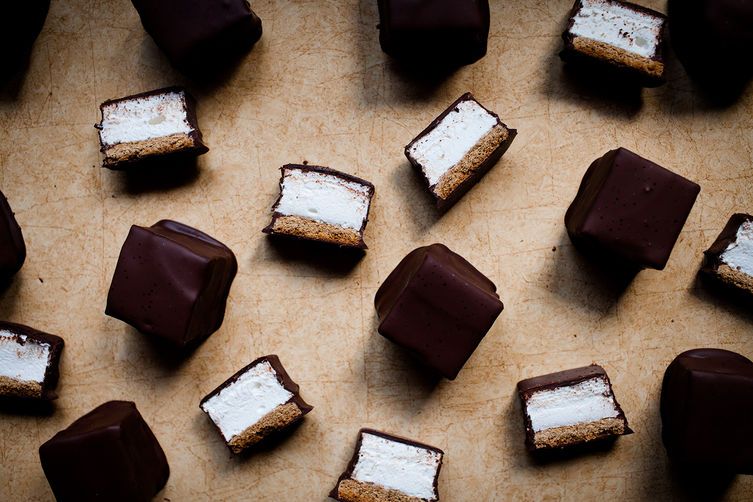 Jennifer P. November 17, 2017
Actually made these and they were a huge hit. The graham cracker has a really lovely flavor and texture- kind of wish I had used salted butter instead because I like a saltier base. I used wheat flour. Marshmallows turned out perfect. I don't own a thermometer and just did exactly what she said. I used a homemade double boiler to do the chocolate and I think I should have let the chocolate melt a little longer because at first it was coating onto the candies way too thick. This is my first time coating anything in melted chocolate so it was probably a newbie mistake. To make up for the chocolate I wasted I just added shortening to the rest to thin it out/make it last a little longer and that actually worked.

Maybe this is obvious to others (again, newbie), but don't coat the marshmallow/graham cracker unless the graham cracker is the exact same size. I just guessed with all of my squares when I was cutting, so I ended up having to trip off the ends of the graham cracker since those squares were a little bigger. Didn't matter- the graham recipe makes more than you need so it works out. My graham cracker dough ended up waaaaaay stickier than I thought when I was working with it so I had to use a lot of flour in the rolling/cutting process, but they turned out great so whatever.

I made these over 2 days so my marshmallows could properly set. Not sure I'd make these again unless another mallomar lover comes into my life- it's a time -consuming treat. But they made lovely little gifts for people and my coworkers were obsessed. Happy baking!

Vicki @. June 25, 2014
I pipe cooling marshmallow onto cookie rounds all the time! (Seriously, check out Wilde in the Kitchen!) I love this idea though, much easier :)

Sophia R. May 31, 2014
Love the look and sound of these. I grew up with a similar sweet in Germany made with a waffle instead of a cookie base but I think I like the sound of these mallomars even better!

Rachel P. May 30, 2014
I can't wait to make these myself at home, because I've been craving them since moving back to England. I used to buy them at Trader Joe's in Los Angeles under the name of 'S'mashing S'mores'.