How to Use a Surplus of Zucchini

Today: Delicious ways to use up a bushel of zucchini -- one peck at a time. 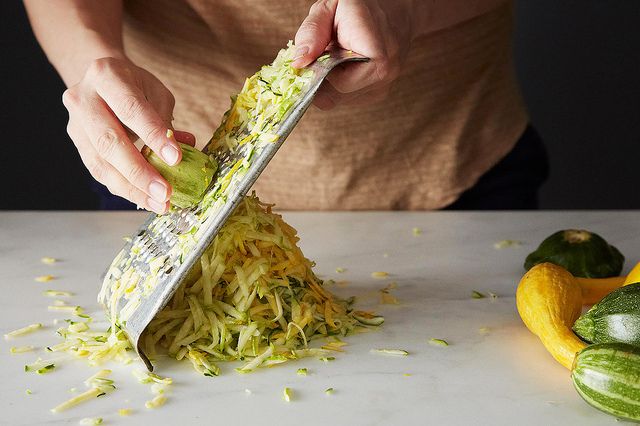 If you're not struck by a wave of culinary indecisiveness come mid-summer, you're either an incredibly organized meal planner, or you have yet to experience the onslaught of sweet summer goods at the market. All the best produce seems to hit the stands at the same time, which puts budgets, stomachs, and restraints to the test. You pick up a couple dozen ears of corn one day, a few pounds of tomatoes the next, and soon your counter is overflowing with a harvest's worth of summer fare.

In kimhw's case, it's an overload of zucchini. So kimhw turned to our community for recipes to use up a baseball-bat sized zucchini without a shred going to waste. From bread to soup, here's what to do with too many zukes. 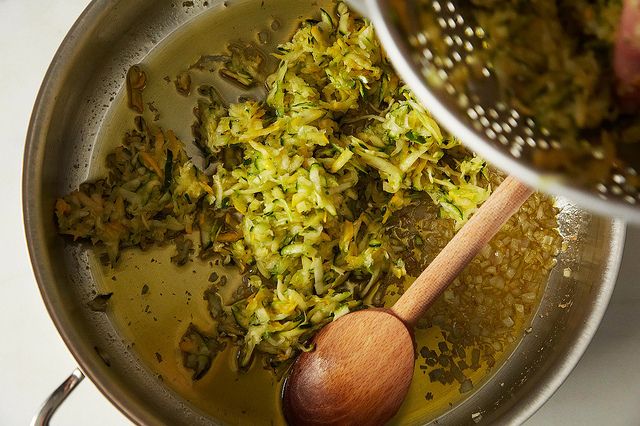 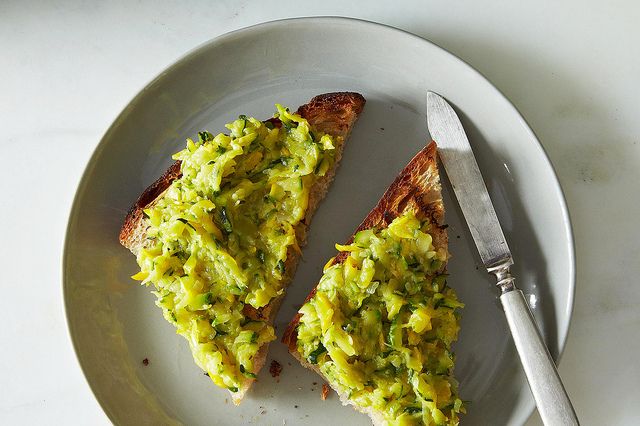 More: Have a surplus of a different vegetable? We've got a new column designed to help. 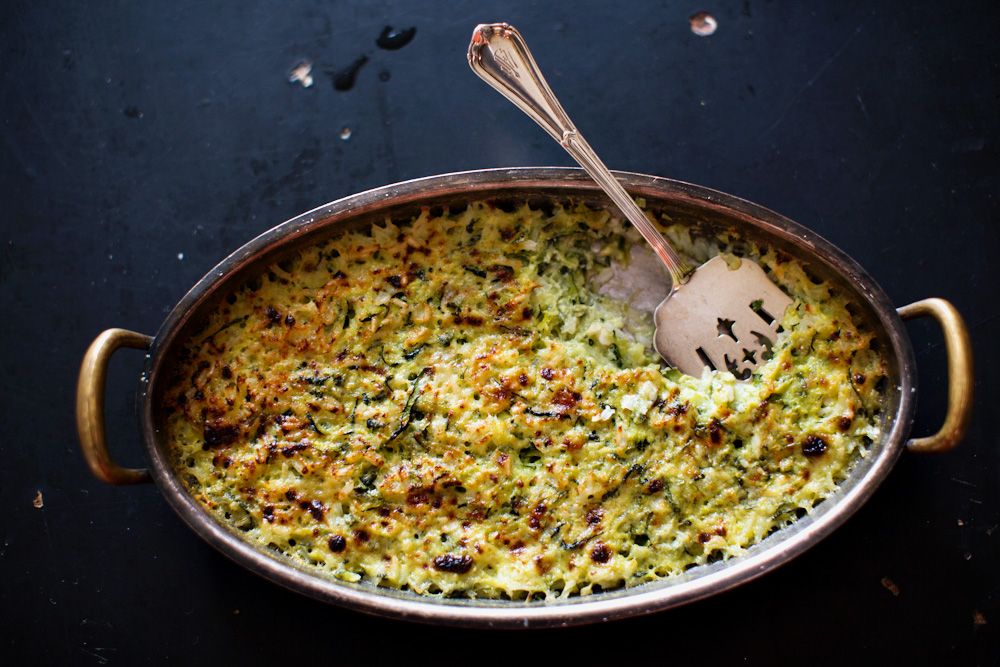 More: Dust off your stock pot -- here are 8 refreshing soups for summer. 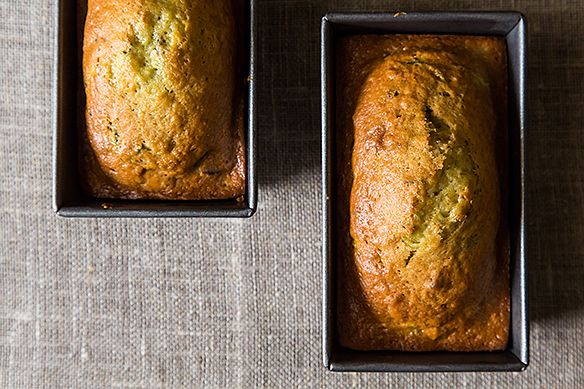 How are you using zucchini this summer? Join in the conversation over on the Hotline or tell us in the comments!

Zucchini Tian photo by Karen Mordechai, all other photos by James Ransom

Sofia June 8, 2016
I like to slice it up, dip it in eggs, coat it in a mixture of seasoned breadcrumbs and parmesan, then fry it in a skillet.

An I. August 10, 2015
I have a delicious grilled zucchini double cheese bake on my blog. Thanks
http://anitalianinmykitchen.com/grilled-zucchini-double-cheese-tuna-bake/

cucina D. June 30, 2015
i use zucchini grated into frittatas, risotto and salads but one of my famiglias' favorites is a roman fried zucchini with grated parmigiano... recipe coming soon to my blog at www.cucinadimammina.com and onFOOD52 :)

Kukla August 13, 2014
I never get tiered of incorporating Zucchini and other squashes in savory or sweet dishes and especially I love mixing them with other vegetables, fruit or cheeses in latkes, pancakes or baked dishes. https://food52.com/recipes/30429-young-zucchini-farmer-s-cheese-or-ricotta-pancakes

Susan July 31, 2014
Besides all these great ideas, remember that shredded zucchini dried beautifully. Simply shred, spread on your dehydrator trays, and then once thoroughly dried put away for later use: in casseroles, bread, muffins, soups, stews, etc. Adding dried zucchini shreds to any cooked dish is a terrific way to sneak vegetables into a produce-phobe's diet.

Matt L. July 29, 2014
It also makes a lovely and light version of carbonara. You can leave out the cream and the cheese you would normally have in carbonara. Simply mix egg yolks, olive oil and some grated courgette (zucchini) which you have lightly cooked in olive oil with garlic and salt/black pepper. Then toss the hot pasta through this - totally delicous. www.timedeating.co.uk

Robert B. July 28, 2014
We love this online recipe for sweet zucchini relish (although there are many others): http://allrecipes.com/recipe/sweet-zucchini-relish/

It has replaced Heinz pickle relish entirely in our pantry. Swap out zucchini and yellow squash interchangeably as you have available.

Katelinlee July 28, 2014
I like this Martha recipe for zucchini parmesan bread:
http://www.marthastewart.com/326581/zucchini-parmesan-loaf

I add a variety of cheeses (a sprinkle of orange cheddar looks nice), and a handful of chopped herbs.

Debra A. July 27, 2014
I love zucchini breads! I always share bread with family & friends when I make it. I make several loaves for that reason. But seeing some of these other recipes....now I need to try some of them! Thanks for sharing!

Amanda P. July 27, 2014
I'm a bit in love with everything squash from summer to winter, which is why I just so happened to write a book all about it :) Smitten with Squash (http://www.amazon.com/Smitten-Squash-Amanda-Paa/dp/0873519396/ref=sr_1_1?s=books&ie=UTF8&qid=1393705370&sr=1-1&keywords=smitten+with+squash) has tons of recipes for this lovely vegetable including these Summer Squash Peach Kisses that are one of my favorites from the book: http://heartbeetkitchen.com/2014/recipes/summer-squash-peach-kisses/

I'd love to send your team a copy of the book - is there someone I could address it to?

An I. July 27, 2014
How about trying a delicious zucchini risotto?
http://anitalianinmykitchen.com/zucchine-risotto-risotto-di-zucchine/

Brandi July 27, 2014
I use my mother in laws recipe for zucchini relish and it is AMAZING!! Use it in place of any relish or spread it over a layer of cream cheese for an easy dip!! Can be a little time consuming for the canning part, but it well worth it!!

almacucina July 26, 2014
Great ideas all around, thanks! I made Moroccan ratatouille with my surplus zuccs: http://www.almacucina.com/2014/07/moroccan-ratatouille.html