Like tomatoes, corn takes on sacred status in the summer -- we herald its arrival and gobble it up cooked into polenta, salads, soups, and even just on the cob. And like tomatoes, corn isn't exactly what it seems to be. It's a grain, not a vegetable! The corn we know and love is actually harvested far ahead of its starchy, dry mature stage -- think of the dried-out stuff you see at the hardware store or in birdseed that is so different from the fresh, milky, just-picked ears that we crave. Harvested after the kernels have been pollinated but before they reach physiological maturity, corn is late summer's sweetest treat.

And speaking of kernel pollination (you can see all six stages of development here), have you ever shucked an ear of corn to find there are empty spots? That's because each kernel on the ear is pollinated separately, and if the weather, wind, soil, and plant location aren't right, some kernels can get passed over. It's a pollination process that rivals that of summer squash -- get this: the corn's tassel contains the male pollen, which is transported via the air to the female corn silk, which in turn transfers the male DNA to the kernels to continue growth! How does the pollen become airborne? The wind, of course. And while pollen can travel up to 600 feet, for best results corn plants need to be within point-blank range for proper pollination -- gardeners, plant your corn seeds in groups instead of long, skinny rows. Your corn harvest will be better for it. 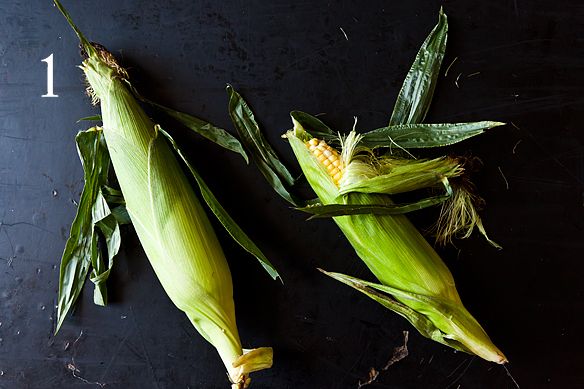 1. So Fresh, So Clean: The corn we eat is actually "sweet corn," the product of an accidental genetic mutation a few hundred years ago that caused the corn kernels to develop much higher levels of sugar than regular field corn. When picked at the right moment, sweet corn is almost candy-like and can be eaten raw -- after harvest, though, the sugars in the corn's kernels quickly convert to starches. (You may remember that peas do the same thing.)

So what can you do? Well, if you're a gardener, pick your corn in the cool of early morning and immediately refrigerate the ears. Keeping the ears at 32 degrees -- yes, just barely at freezing temperature -- will arrest the conversion of the sugars. And if you're looking to buy the best possible corn despite the high heat of the farmers' market, ask around until you find a stand that picked their corn that morning. In the end, it's something to be aware of, but not to sweat too much: just-off-the-plant corn may taste like a miracle, but it's still pretty damn good the next day. 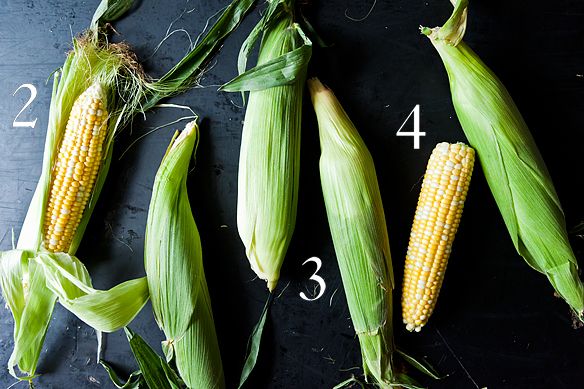 2. Taste the Rainbow: Corn is yellow and that's that, right? Not quite. Depending on the variety, corn can range from blue to red to even green! Yellow and white bi-color corn is the variety we see most often, but you can find heirloom seeds that grow corn in all colors. Just keep in mind that the lighter the color, the more tender and sweet the kernels -- darker corn is best saved for simmering into polenta or grinding into flour.

3. Buying Guide: It drives me a little crazy when shoppers partially shuck ears of corn at farmer's market: it's not the best way to pick them, and now you've ruined that ear for other shoppers by picking at it! A much more reliable (not to mention friendlier) way to go at it is to pick ears that feel heavy in the hand and are evenly dense when gently pressed from bottom to top: this means the kernels are fully filled in and heavy with milky sugars. Feel around the top, especially; because it is exposed to the air, it'll be the first area to go bad. And if the ears of corn look dusty, or if the tassels look mildewy, move on to the next market stand -- that corn isn't at peak freshness.

4. Aw, Shucks: Once you've picked your corn, the battle is only half done: now you have to shuck it. We like to rip off the husk in bunches, starting at the silk, which makes both for quicker work and possibly less mess. (Corn silk, though we may need you for fertilization, why must you stick to everything?) With the corn shucked, you're free to broil, grill, or simply simmer the ears -- or trim them, which we'll tackle next. 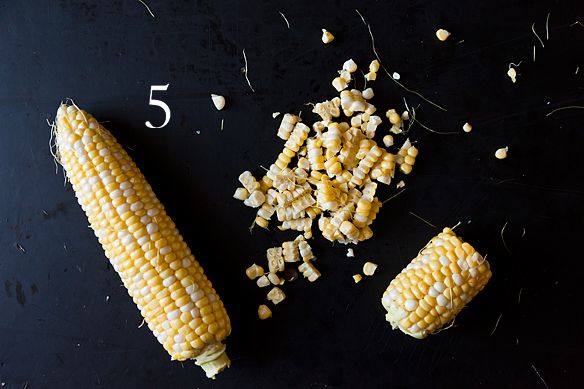 5. Ways of Cutting: Every summer, the world tries to tell you that cutting kernels from an ear of corn is really difficult. You need this special tool, you'll hear. Just prop up the ear in a bundt pan and hack away with a chef's knife, your friends say. We take a bit of a different stand on the issue, and we're here to make your life easier: simply lay the ear on its side and slice away, safe and horizontal as can be. And afterward, you're cheating yourself if you don't scrape the back of your knife against the cob to release the fragrant, milky juices trapped in the kernels -- if you can keep from sneaking pinches off the knife's edge, it will add extra oomph to your sautes and succotashes.

And don't toss those corn ears! Simmered in milk or water with any other extra vegetable scraps you have around, they make a vibrant, summery broth that's perfect for anything from chowder to poaching chicken.

Raw or cooked, grilled or steamed, you have no excuse but to buy a baker's dozen of fresh ears this weekend (you can find a nearby farm with Real Time Farms!) and spend the weekend cooking. We certainly have enough corn recipes for you -- here are some of our favorites.