Jicama and How to Use It

Today: This tuber might not win a beauty pageant, but it should win a place in your kitchen. 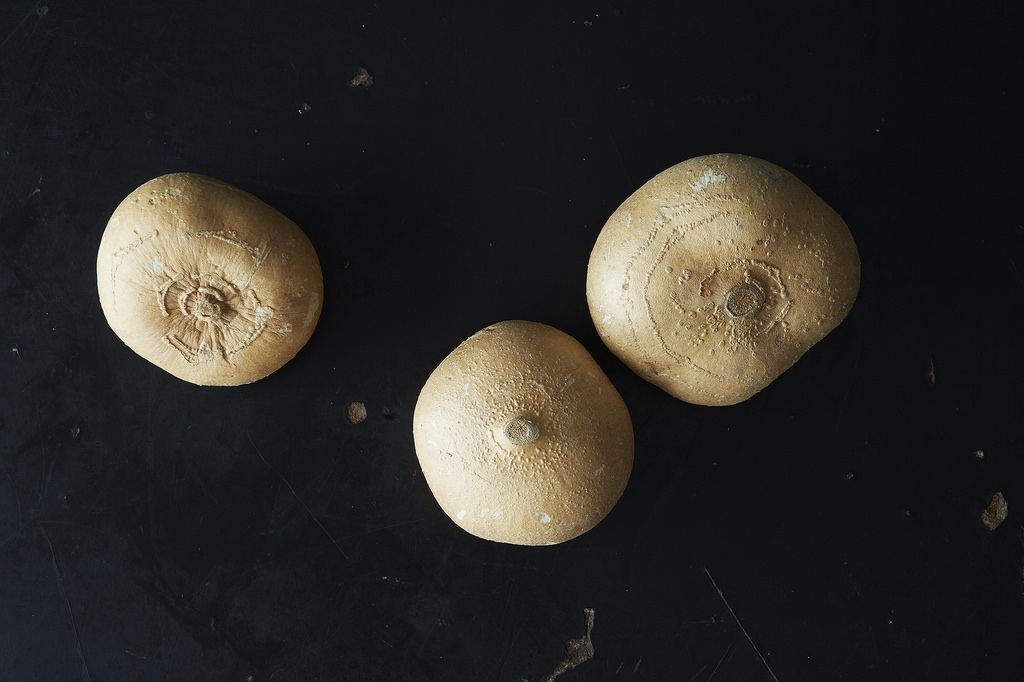 Jicama belongs to the enormous legume family, whose members include chickpeas, green beans like Romano beans, and shelling peas, snow peas, and snap peas. If the legume family makes you think of climbing vines and fruits that we refer to as pods, you’re right -- and the jicama plant does that too, but that’s not the part of the plant we eat.

We eat the tubers, and most of those available in the U.S. are coming from Mexico (you might hear jicama called a Mexican potato or Mexican turnip). Jicama likes warm, tropical-type weather, so in all likelihood you aren’t growing your own. But if you are, know that the tubers are the only part of the plant you should be eating. Every part of the plant growing above the ground contains some level of rotenone, which is poisonous -- it's used as an insecticide and pesticide. Seed pods are said to be safe when young, although some say only if the hairs on the young pods are removed before cooking...by rubbing them off in sand. So we'd recommend sticking to eating the tuber, and only the tuber. 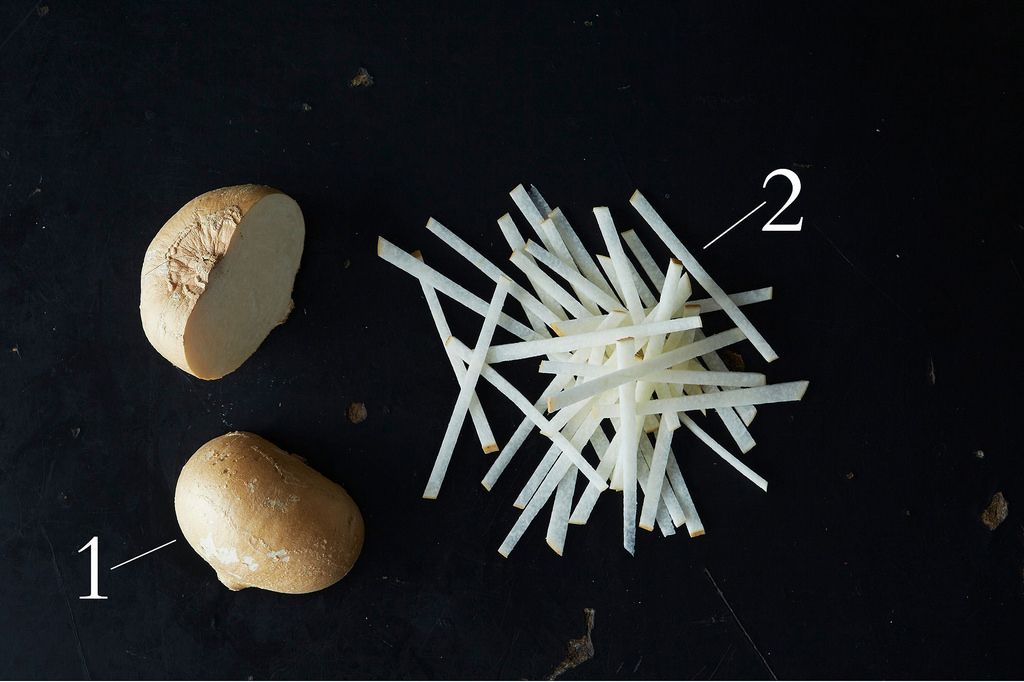 Jicama is available year round, but it's at its best from October into the spring. And before you ask your grocer where to find it, know that jicama is pronounced HEE-ka-ma; if you prefer HICK-uh-muh, you can keep marching to the beat of your own linguistic drummer, but now you'll know why people are smirking.

When selecting jicama, look for specimens that are firm and free from soft spots. Vegetable expert Elizabeth Schneider recommends selecting “relatively unblemished tubers with a slight silky sheen (1); ones that look smooth and young compared with their companions.” She even advises nicking the skin to make sure that the tuber is juicy. It’s a smart move -- older, thicker skinned jicama won’t be as good -- but be stealthy, or risk the ire of a shopkeeper. Look for specimens that are heavy for their size, but stick to medium-sized tubers: Although jicama can grow to be large (really large), the larger ones are more likely to be dry and fibrous.

Whole jicama will keep well in the refrigerator unwrapped for up to 2 weeks. If you’re storing a partial piece, wrap the cut side in plastic; it will keep for about a week. When you're ready to use your jicama, peel it with a paring knife; once you get a section started, the skin should peel off in sections. Use your knife to trim off any remaining fibrous bits, and then chop it into any shape you choose (2); it won't discolor when exposed to air, so it can be prepped ahead of time. 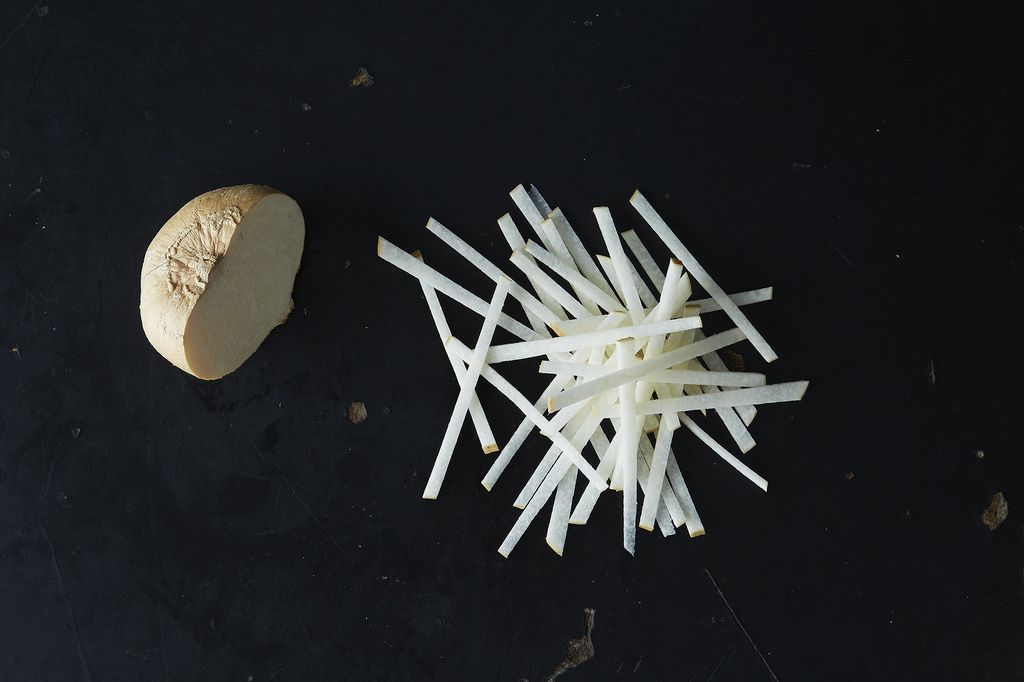 The texture of jicama is similar to that of an Asian pear crossed with a raw potato -- very crisp and juicy -- and the flavor is mild and slightly sweet. Jicama is frequently used raw, but it can be cooked, too -- think stir-fried or sautéed. And, like the tofu of the vegetable world, it soaks up sauces like a champ. Here are some ideas for putting your jicama to good use.

A final tip: Diane Morgan recommends salting jicama before using it -- like you might eggplant or zucchini (toss cut pieces with a small amount of salt and let them drain in a colander for 30 minutes or so). She says it brightens the taste, removes some of the water, and give it even more crunch.

Tell us: What's your favorite way to use jicama?

HalfPint October 13, 2014
My mother puts julienned jicama in her Vietnamese egg rolls. Even after it is cooked, the jicama retains it's crunch.

Sodium G. October 12, 2014
I use it like bread for a crisp and refreshing open-face sandwich! #notsaddesklunch

Stacy October 12, 2014
Loved this article and shedding some light on jicama! See my Jicama and Mango slaw for an inspiration. It's sweet-and-spicy mix is ADDICTING and a huge crowd pleaser! =)

Claudia A. October 12, 2014
It's a wonderful substitute for water chestnuts. And often less expensive.

Nancy H. October 12, 2014
Exactly! I am not able to find water chestnuts here in Mexico but jicama is plentiful so now my stir fry dishes have an amazing crunch!

ButterSugarFlowers October 12, 2014
Lindsay-Jean, thanks for another informative article. I thought you would want to see how I recently used jicama: in cake batter! I created this recipe with jicama, turbinado sugar and lime, and topped it with tequila glazed fruit. Turns out jicama makes for a super moist crumb. http://buttersugarflowers.com/2014/08/14/jicama-lime-cake-with-tequila-glazed-nectarines/

Carolyn K. October 11, 2014
I like to use it as a substitute for all or part of the apples in a Waldorf salad

Mar P. October 11, 2014
The last of the list is the classic way to eat jícama in México.
Good at any time, all year, for everyone.
Only TWO calories in a good slice (plain), just perfect for filling up your hungry tummy. And its also cheap. At least over here.