How to Make Cranberry Sauce Without a Recipe

Today: On a day as hectic as Thanksgiving, cranberry sauce doesn't have to be your priority -- and that's because you don't even need a recipe to make it. 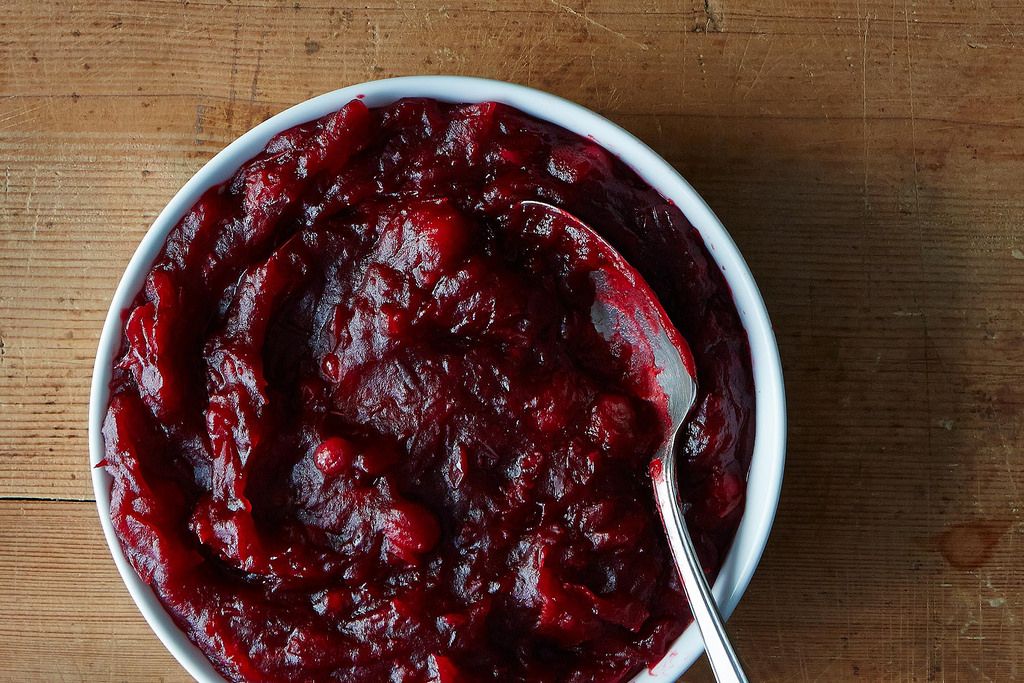 You probably have something to say about cranberries. Perhaps you're one of those strange few who snacks on them raw, or maybe you're someone who only eats them if they're tucked into pies or cakes. It's also possible that when you think of cranberries, you can't get past your disdain for their dried brethren (and you wouldn't be alone).

But none of that matters this week. Come Thursday, you're going to have cranberries -- most likely in the form of sauce -- on your Thanksgiving table, whether you like it or not. Think of cranberry sauce as your great aunt: Maybe she's the fun one who spikes the cider and only wears muumuus, or maybe she's a sour lady who chews too loudly. Regardless, she's at Thanksgiving.

And unless you've found a truly special recipe, you probably haven't made cranberry sauce -- the Thanksgiving mainstay that it is -- your number one priority. On a day when your stack of printed recipes is only slightly less thick than War and Peace, the good news is that you can forget about the cranberry sauce until the last minute. Set aside those recipes and get started:

1. At least thirty minutes before you plan to sit down to eat, gather the ingredients. Chances are high that you have most of these around the kitchen on Thanksgiving anyway. All you truly need are cranberries (there's no way of getting around this, but both fresh and frozen work well), sugar, and water, but those three ingredients does not an exciting cranberry sauce make.

Here are a few things to try for a more memorable sauce: 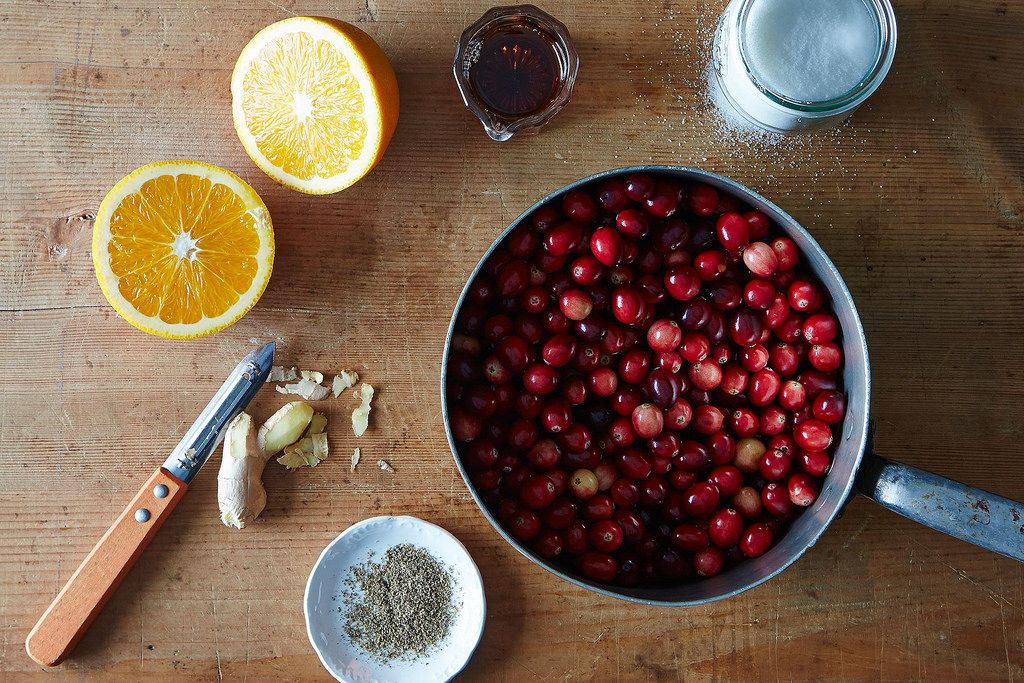 2. Put your ingredients in a medium saucepan and bring the liquid to a simmer. We poured in 2 bags of fresh cranberries and added the juice and peel of an orange, white sugar, grade B maple syrup, and peeled fresh ginger. Add spices, whole or ground, that you want to infuse the sauce, along with any other liquids you're using, at this stage. (If you want to save time later, bundle the whole spices and any pieces of citrus peel or ginger in a piece of cheese cloth or a large tea bag, tied with kitchen twine -- this will make it easier to remove it once the sauce is finished.) 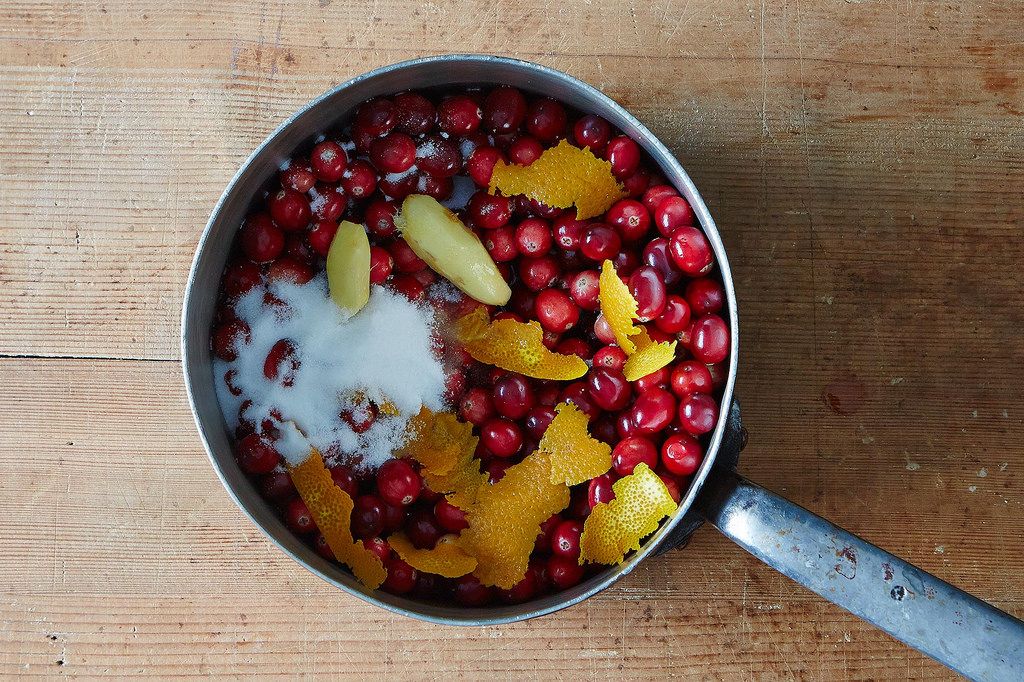 3. Monitor the liquid levels and taste for sweetness. As the berries cook, they'll burst and release liquid. If your pot starts to look dry, you can add a couple more tablespoons of liquid. Simmer the sauce, stirring frequently, for 20 to 30 minutes, until the mixture has thickened and most of the cranberries have burst. Keep in mind that the sauce will firm up as it cools, so you'll want it to be a little looser in the pot than is intended for the table.

Taste often and judge if the sauce is too tart for your liking (we had to add several tablespoons of maple syrup to balance the tart cranberries and the acidic orange zest). If you're not using a sweetened liquid, like orange juice or apple cider, you might need to add more sugar, syrup, honey, or whatever you're using. The taste of your cranberry sauce is up to you, but most people end up with somewhere between 1/2 to 1 cup of sugar for each 12-ounce bag of cranberries. 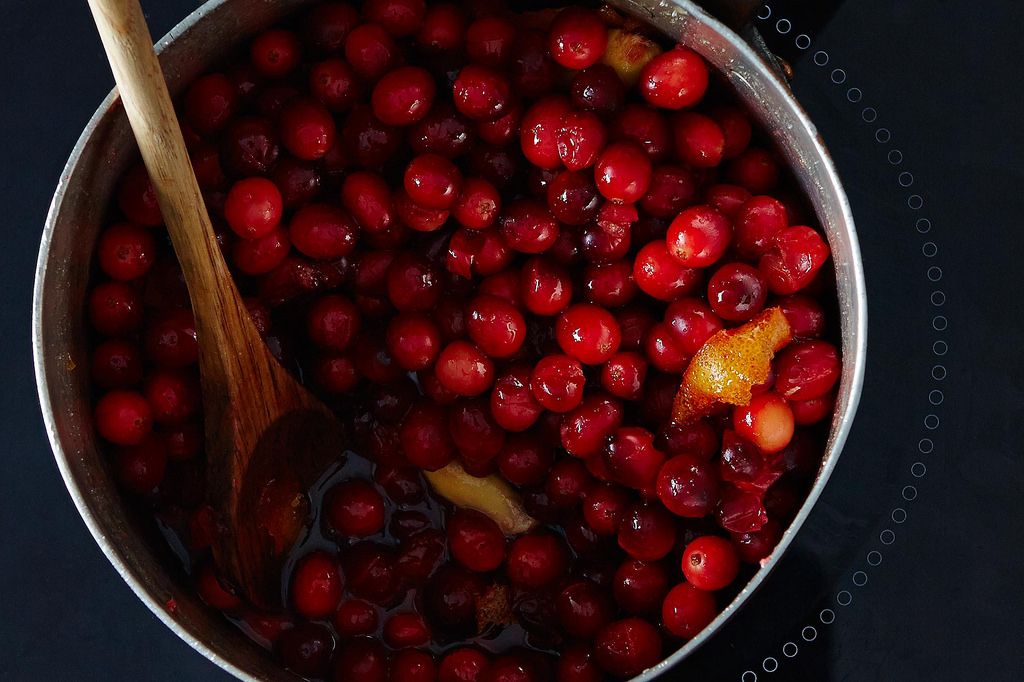 4. Time for the finishing touches. If you like a sauce with more texture, stir in a handful or two of raw cranberries and simmer for an additional 5 minutes. Or, if you're looking for a smoother, jellier sauce -- more like the kind you'd get from a can -- push the sauce through a fine mesh strainer using a spatula or the back of a wooden spoon, like in this Genius recipe.

Season with spices (we used freshly ground black pepper) and sea salt, and stir in Microplaned orange or lemon zest. Let it cool and thicken before serving. If you aren't leaving the cranberry sauce until the last minute, you can make it a day or two ahead and serve it chilled, or, for more pronounced flavors, at room temperature. Before serving, you can mix in nuts, like toasted, sliced almonds or candied pecans, for extra crunch. And remember to fish out any large pieces of ginger or orange peel (or your spice bundle), if you added them at the start. 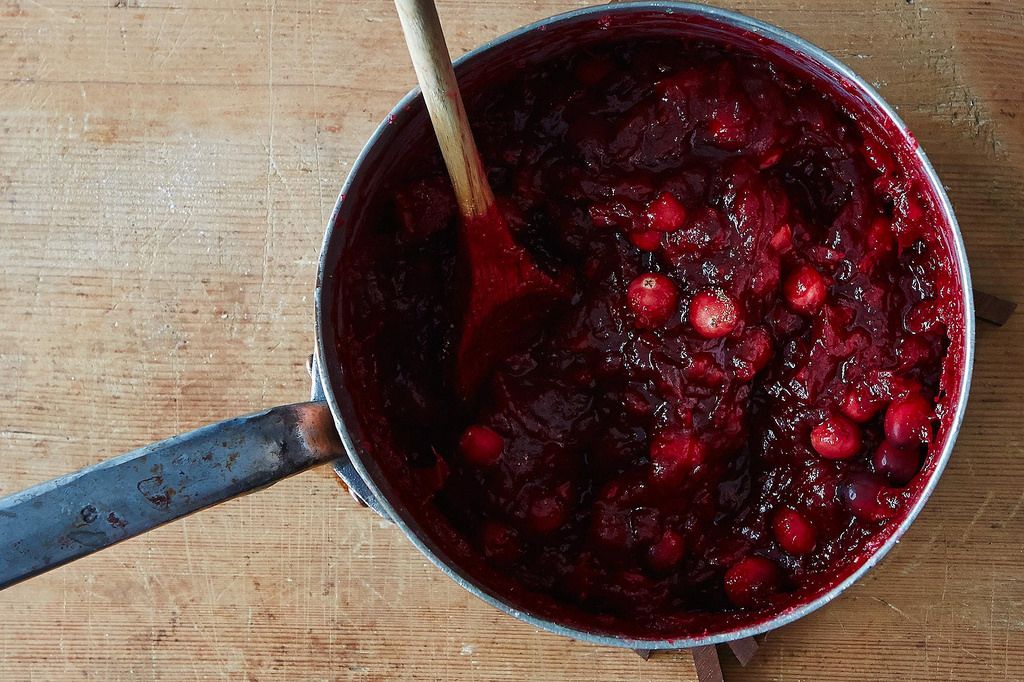 5. Set the table, carve the turkey, and garnish the mashed potatoes with chives. All of your Thanksgiving bases -- including the cranberry sauce -- are covered. 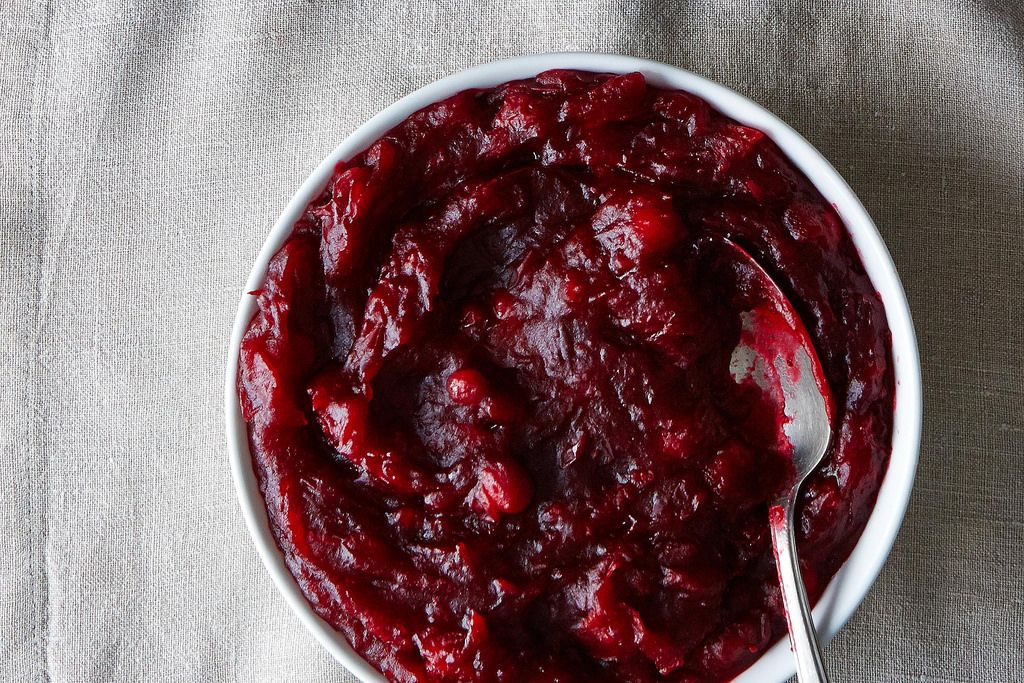 What are your tips for making perfect cranberry sauce? Share with us in the comments!

AntoniaJames November 24, 2014
Other thoughts: make it on the weekend before of on Monday evening. It will taste so much better. Also, don't forget that cranberries work particularly well in
mostardas. https://food52.com/blog/8577-how-to-make-mostarda-without-a-recipe I use a combination of dried and fresh this time of year. ;o)

AntoniaJames November 24, 2014
Bay leaves. And cognac Making a double batch of this - well, 2 batches in parallel -- one as stated here https://food52.com/recipes/24974-bay-infused-cranberry-sauce-with-dried-tart-cherries (adding cognac) and another batch subbing black Mission figs for the Zante raisins (marketed as "currants"). Once you make your cranberry sauce with bay leaves, you'll never make it again without them. ;o)

AntoniaJames November 24, 2014
I like the black Mission figs best, because their texture makes them less obtrusive. But seriously, if I had to choose between bay leaves and figs as the one add-in I was allowed, it would be the bay leaves, hands down. Also, here's a tip: Asian pears retain their crunch, and flavor, beautifully. I discovered this in my most recent no-recipe mostarda, made with figs, cranberries and dried cherries (and both Bartlett pears and Asian pears). And cognac. Utterly amazing. Excellent on or with any pork, chicken, ham or turkey sandwich, by the way. ;o)