How to Make Vegan Eggnog

Today: An eggnog for vegans and eggnog skeptics alike. 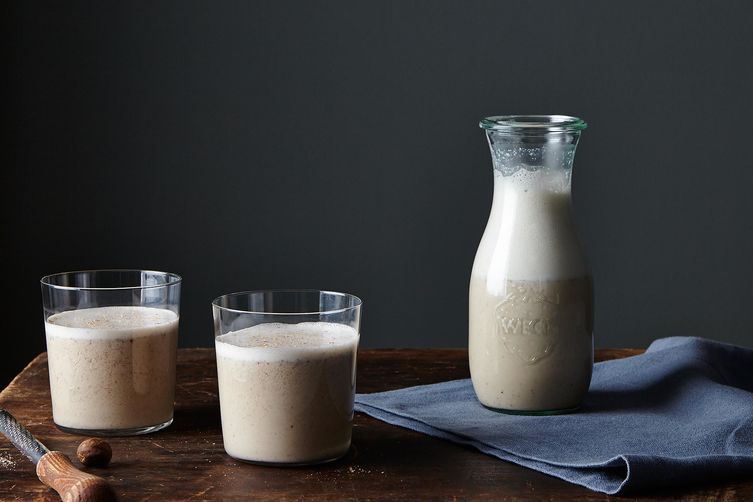 When I told my boyfriend that I was whipping up a vegan eggnog for The New Veganism, he scrunched up his nose and was silent -- hardly his typical response when I announce that I’m about to test a new recipe. Further inquiry revealed that he despises eggnog -- can’t even stand the smell of it -- mostly because he finds the egg flavor impossible to escape. I assured him that an egg-free version would change the way he thought about eggnog forever.

More: Here are 13 recipes to accommodate any guest and any diet.

Sure, egg-free eggnog may sound like an oxymoron. But is it really the egg we all love about eggnog, or is it the thick texture, the hints of baking spices, and the sweet, irresistible richness? That’s what I remember fondly about traditional eggnog, anyway, and it’s exactly what is captured in this version. A mixture of coconut milk and cashews creates creamy texture -- the kind that will result in a nice, thick moustache after you take your first sip -- while maple syrup, dates, and a traditional spice combination create authentic flavor. You can spike it with some bourbon or rum, or you can simply enjoy it as a sweet treat.

When I handed my boyfriend a small glass of the nog, he looked skeptical, but upon realizing that the characteristic eggnog odor was nowhere to be found, he intrepidly took a sip. His eyes lit up, and before he could say a word, he’d gone back for another long gulp. “Yeah, this is really delicious,” he said, before proceeding to polish off his glass. It was all the eggnog affirmation I needed to hear.

Gena's new book Choosing Raw: Making Raw Foods Part of the Way You Eat is a thorough, relatable guide to incorporating raw and vegan foods into any diet. It's full of no-fuss recipes for every meal, which range from fully raw to mostly cooked, with plenty of snacks and desserts to keep everyone happy.

Madelyn R. December 12, 2015
Amy, my version keeps for at least a week. It might separate, but you just shake it and it'll be ok. In my house, this usually goes completely in one party. So It does not last long after making a batch. Hope you like it...

Madelyn R. December 16, 2014
Here is a version of a vegan Coquito, the Puerto Rican version of eggnog. No eggs or dairy involved. and for those concerned with calories or fat content, you only sip a little at a time... this is served in a shot glass, but sipped slowly.
http://karma-free-cooking.com/2014/12/01/vegan-coquito/

maybe we'll just omit that stuff.. or is there a healthier way?

SDMfoodie December 14, 2014
So this is NOT eggnog but VEGnog...probably alot healthier than all those eggs anyway...will give it a try...thanks!

nzinga December 14, 2014
This sounds delicious! I can't wait to try it. Nat, I've seen some folks post about using sunflower seeds (raw, untoasted, unsalted) for cashews in vegan recipes where the nuts are soaked first. I've never tried it myself, but it it might be worth a try? Good luck!

nzinga December 14, 2014
I meant to reply directly to your comment and replied in the main thread instead (that's what I get for commenting before I've had my coffee). I think raw/untoasted would be the same thing, so I've corrected that here:
This sounds delicious! I can't wait to try it. Nat, I've seen some folks post about using sunflower seeds (raw, unsalted) for cashews in vegan recipes where the nuts are soaked first. I've never tried it myself, but it it might be worth a try? Good luck!

Gena H. December 15, 2014
Nat, sunflower seeds, macadamias, and pine nuts are all good substitutes! Or you can use coconut cream from another can of coconut milk (the thick part that settles at the top if you keep the can in the fridge).