The Genius Secret Ingredient Your Sautéed Mushrooms Are Missing

We're bringing back this hit recipe from spring 2015, while Genius sleuth Kristen is on vacation after wrapping up the Genius Desserts cookbook. (It's not a dessert, but feel free to eat it like candy.) 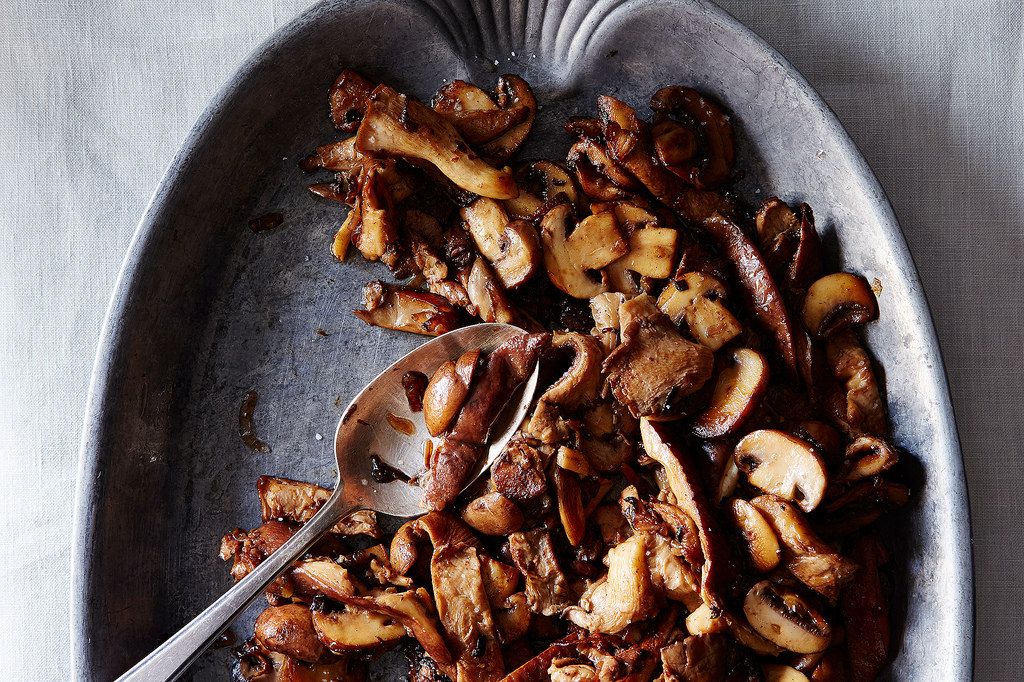 Dill pickle brine's chief function is to preserve cucumbers into infinity. Its reason for being is utility; its food class: byproduct. When it escapes the jar, it's most often served on the side of a cheap shot of whiskey.

So I don't blame you if you tend to eat all the pickles and then throw the juice away—at least, not until right now I didn't. 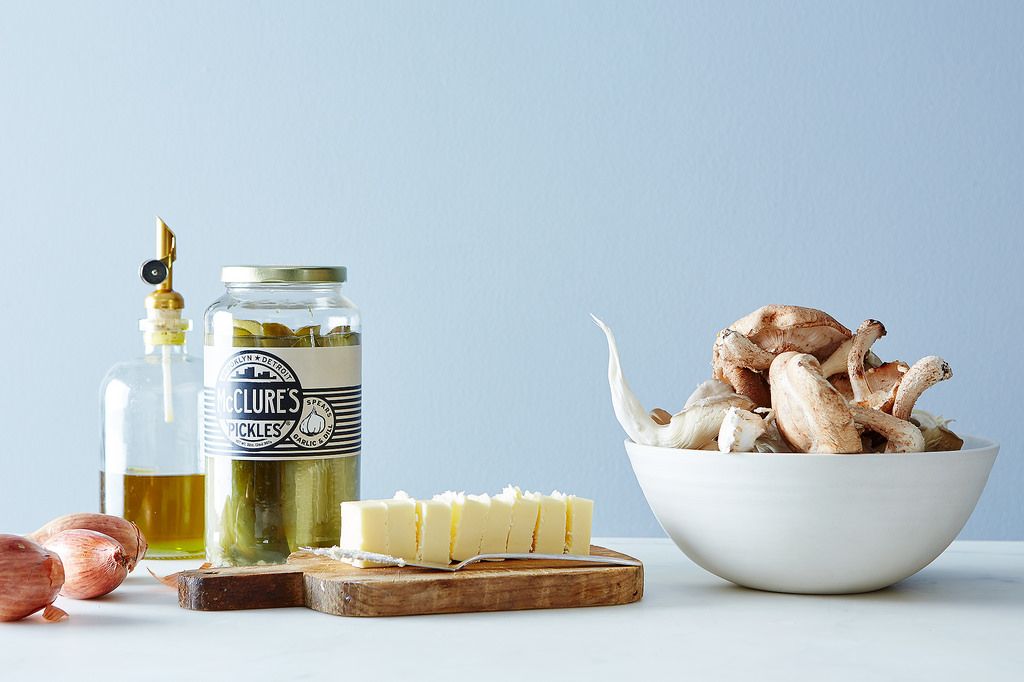 Maybe nobody told you that tossing pickle brine is just like tipping a perfectly good bottle of vinegar or fish sauce or Worcestershire down the drain. Maybe you never heard that you could cook with brine, not just use it as a bracing, salty slap to chase your sorrows. Or maybe you assumed that brine would always take over, setting its vinegar and salt and spice on top of everything else. You might even have slipped some pickle juice into potato salad or Bloody Marys, where blandness signals a crushing defeat.

But as I learned from Stuart Brioza, chef-owner of State Bird Provisions in San Francisco, brine could be doing so much more. He splashes dill pickle brine into buttery sautéed mushrooms—refined, seasonal, expensive mushrooms. And it makes them even better. 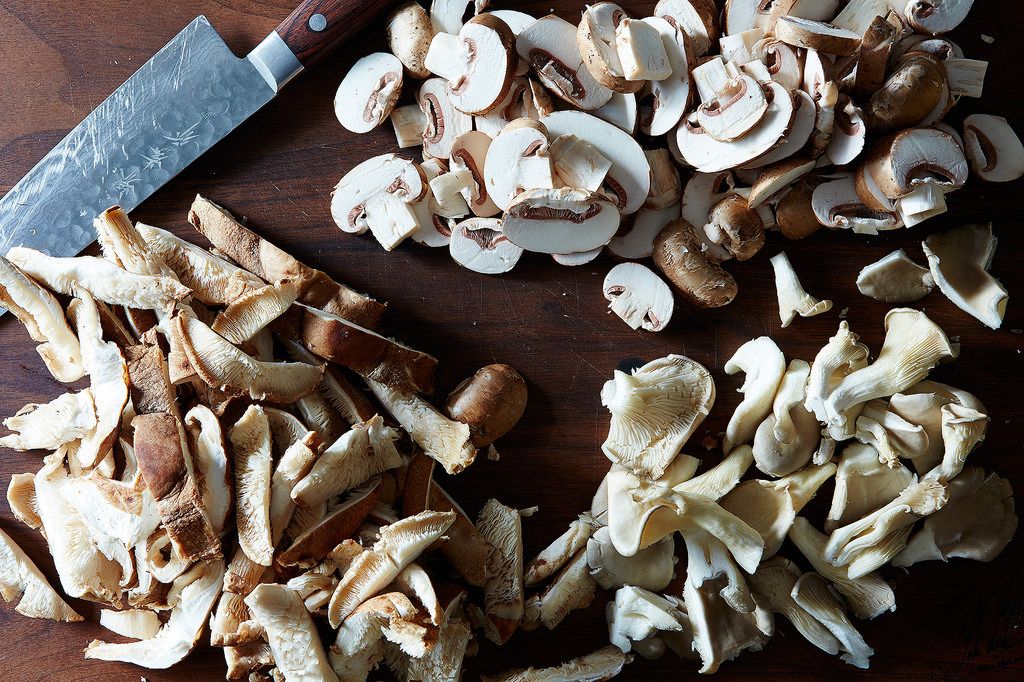 Unless you're approaching the proportions used for pickles (i.e. literally swimming in brine), it's just a contained burst of acid, salt, and mulled seasonings that together work background magic. Used in tablespoons, not pints, it doesn't announce itself, but somehow makes the butter and mushrooms speak louder and more clearly. 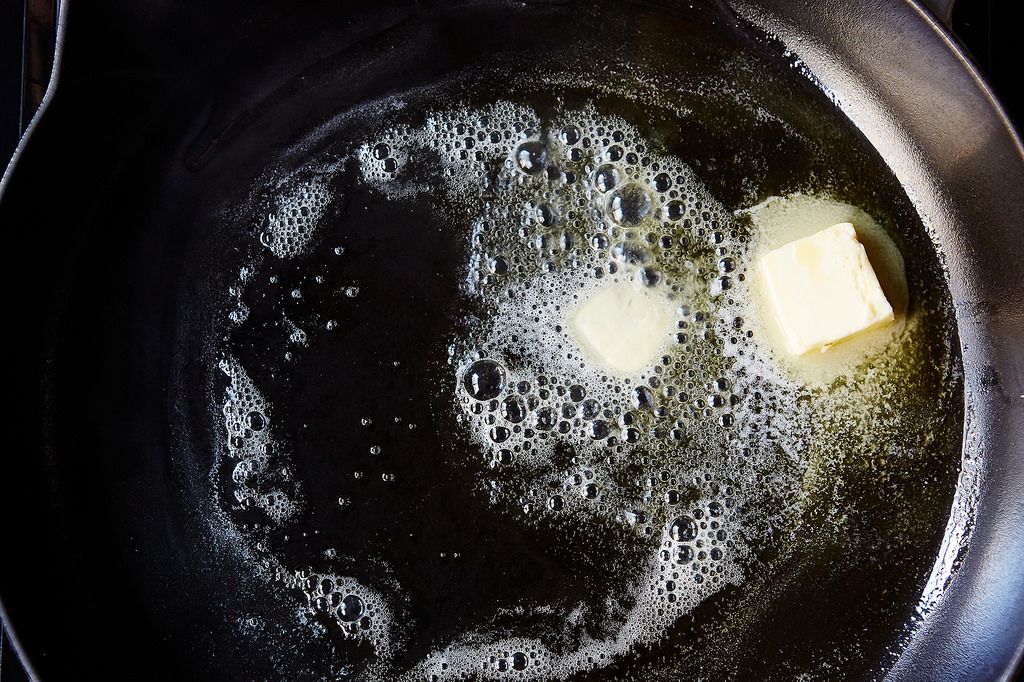 "I love pickles. I love mushrooms," Brioza wrote, in explaining how he came up with the idea. "We like to ferment turnips at the restaurant, and it's a great way to use that brine (though dill pickle brine would work just as well)." Imagine what pickle brine could do for your other fine spring vegetable hauls—your ramps, your delicate greens, your radishes. 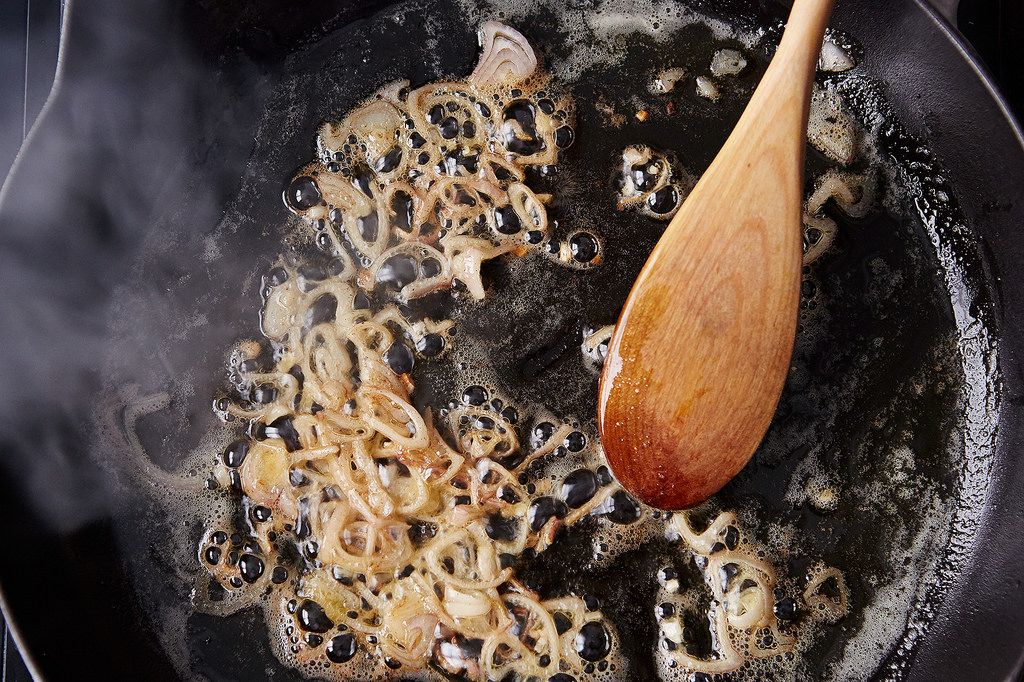 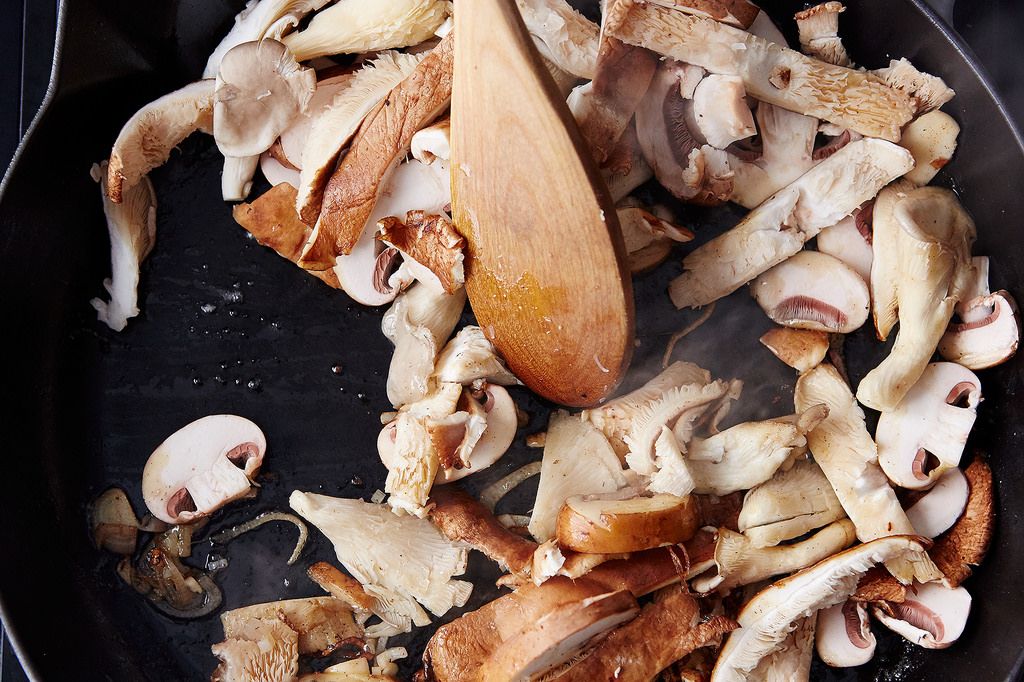 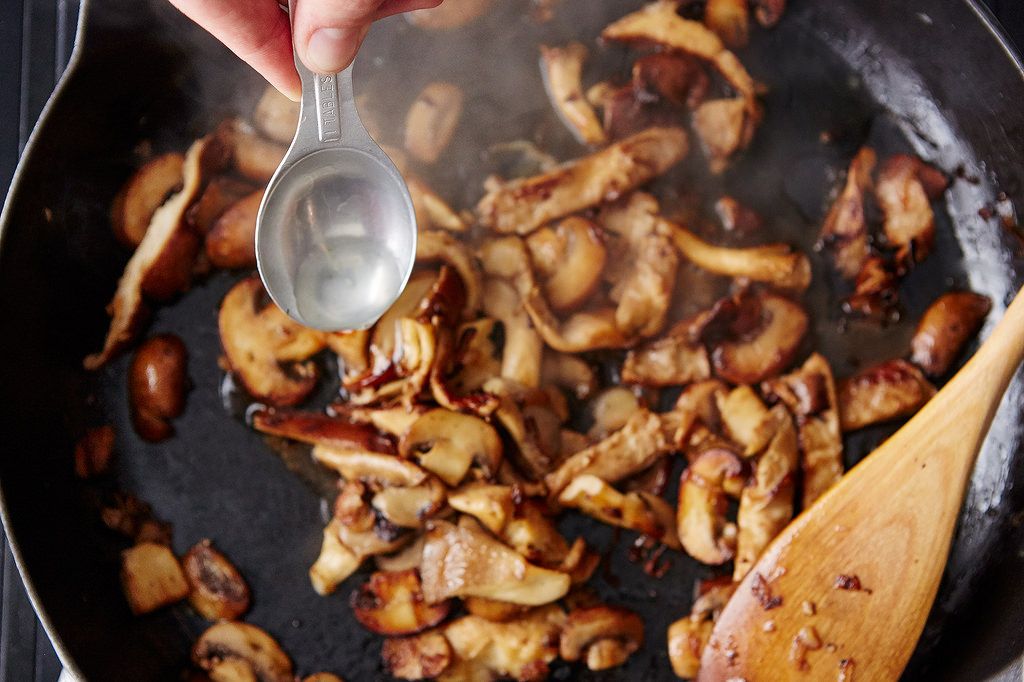 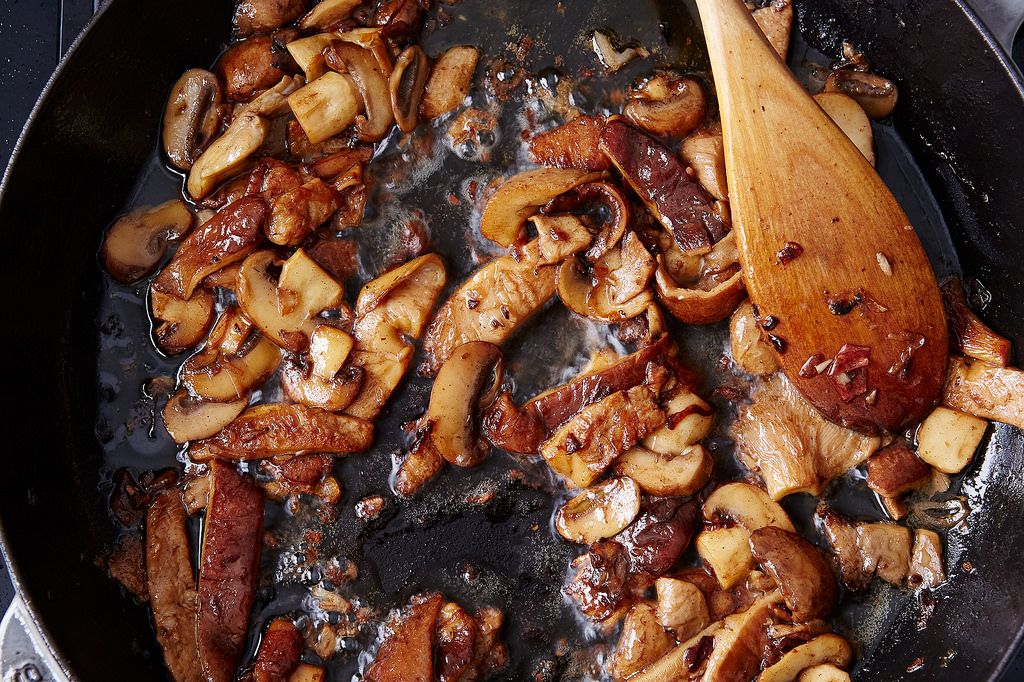 As for the mushrooms, they're pretty ethereal all on their own, but they'd sit nicely with steak or roast chicken, or in a bowl of lentils or grains. Or, per Brioza, "One great way to eat them would be as 'bread and butter pickle mushrooms': Serve them warm on crusty buttered bread."

Serves 6 to 8, but scales down well

Got a genius recipe to share—from a classic cookbook, an online source, or anywhere, really? Please send it my way (and tell me what's so smart about it) at [email protected]. Thanks to Associate Editor Ali Slagle for this one!

The Genius Recipes cookbook is finally here—and a New York Times Best Seller! The book is a mix of greatest hits from the column and unpublished new favorites—all told, over 100 recipes that will change the way you think about cooking. It's on shelves now, or you can order your copy here.

elizabeth L. November 22, 2020
I just made soup using corned beef broth/liquid that I cooked it in with cabbage & potatoes. It's nice to see more people thinking of ways to reuse instead of throwing away. Pickle juice can be even added to a bbq sauce you are making from scratch.

Bernie B. November 21, 2020
Olive brine just as good used with mushrooms. I make a spanish rice which is tomato based with paprika, saffron, mushrooms and sliced green olives with pimentos.
I found that i really enjoyed the olive component so i would add olive jar brine and voila!

Mark D. November 18, 2020
Are we talking about naturally fermented dill pickle brine or commercial dill pickles that are in vinegar?

elizabeth L. November 22, 2020
I have used both for my soups. I will have to try the mushroom recipe. I would say the commercial dill pickle one would give more pronounced flavor to liven up the mushrooms.

Mari O. April 22, 2018
As a single, I have lect-over used half onions that go in the dill pickle brine even if there's still a few pickles there. Great minced finely in homemade tartar sauce for fish, also for potato salad, tuna salad, egg salad.

Patricia April 16, 2017
Hard boiled eggs peeled and put in leftover dill pickle brine makes great pickled eggs. Put in cooler or refrigerator for 2 weeks or more for maximum flavor. The eggs will have a greenish tint on the outside. Taverns in rural Wisconsin always had them in the coolers and on the backbars in the good old days. Taste great with a cold glass of beer.

Jena May 31, 2020
I will have to try this ASAP! I am actually from WI and love to eat the pickled eggs from bars. A place in Menomonie, WI called The Den even had homemade hot sauce on top!

Bob H. March 31, 2017
I had not EVER thought of using pickle brine. This interesting because I am making a mushroom soup tomorrow evening and what a perfect time to add a bit of new flavor

Bob H. March 31, 2017
I had not EVER thought of using pickle brine. This interesting because I am making a mushroom soup tomorrow evening and what a perfect time to add a bit of new flavor

Judith March 31, 2017
Rhonda, I'll let you know if/when I try it using B&B pickles. (People usually raise eyebrows around doing anything with B&B pickles, tho I don't know why! I first realized I was odd when, as a child, I discovered crunchy peanut butter with B&B pickles. Love that combo to this day!)

tamarrind May 21, 2020
Judith - B&B pickles and peanut butter were a mainstay of my childhood! I introduced my (now adult) children to this flavor delight when they were kids - a big hit).

Judith March 31, 2017
Marilyn, I should have said SOUR, not Bitter! Clearly I'm not a pickle aficionado (unless we're discussing sweet pickles!)

Julie F. March 31, 2017
Any ideas about how to do this dairy-free? Butter substitute?

Edward March 31, 2017
Peter Pherson, are you here to criticize grammar or to learn something new about the preparation of mushrooms? Get a life dude! Move on!

elizabeth L. March 31, 2017
I've been using leftover pickle juice/ brine t h at I get from my sister & my l homemade too, and olive brine for a long time. I make all sorts of great soups. One that pairs well is any pickles chopped up or even cucumbers, browned hot and sweet ground pork sausage meat or chicken or real ukrainian kobasa or even ham, onions, lentils, cabbage, celery, any greens like collard or kale, barley, herbs & seasoning chicken or vegetable broth and you got a great soup. You can add plain Greek yogurt or sour cream or buttermilk to mellow it out. You can also use pickled brine and saurkraut juice for a pork or smoked ham and saurkraut, cabbage soup mixed with chopped tomatoes, onions, celery, caraway seed, dill, parsley. Possibilities are endless.

Bernie B. November 21, 2020
I am getting Hungarian Paprika dreams in my head from your post. Yum.

Rhonda35 March 30, 2017
I made these delicious mushrooms tonight - and then stirred them into cheese sauce and poured it over pasta. Not too shabby! I always have a jar of pickle juice going in my fridge - I use it to brine poultry, but now have a new use.

Mike March 30, 2017
Pints of pickle juice do have at least one use: I add at least that amount to the water I cook the pasta in when making a pasta salad, and then splash another TBS or 2 on the pasta while it still warm after it's been drained. Adds LOTS of flavor, and especially good when the veggies added to the salad are themselves all pickled, like onions, capers, olives, tomatoes, peppers, and about anything else that trips out on acid.

Judith March 30, 2017
I'm partial to Bread and Butter Pickles (e.g. Bubbies!). Would you use that? Is it about the bitterness of dill pickles or just about the vinegar and spices?

Marilyn March 30, 2017
Absolutely not the same thing. Would not work with sweet pickles.

I have not had any bitter dill pickles? The pickle juice in this recipe would be all about adding the vinegar (acid) to the rich/fatty mushroom saute.

Rhonda35 March 30, 2017
I'm not sure I agree with Marilyn, Judith; well, sure it won't be the "same" as using the brine from a more sour pickle, but it will probably be tasty. I would give it a try! I often use a splash of sweet wine to deglaze sautéed mushrooms and I would think the sweet and sour of Bread and Butter Pickles would be similar to that. If you try it, report back! :-)