A salad dressing without olive oil doesn't sound genius—it doesn't even sound good. Harsh, imbalanced, aggressive, joyless even? Well yes, it must be so.

But this radish and herb salad, from Engin Akin's new cookbook Essential Turkish Cuisine, has no fat of any kind—and involves no sacrifice, no straining to compensate. Truthfully, it's all the better for not having a lick of oil. 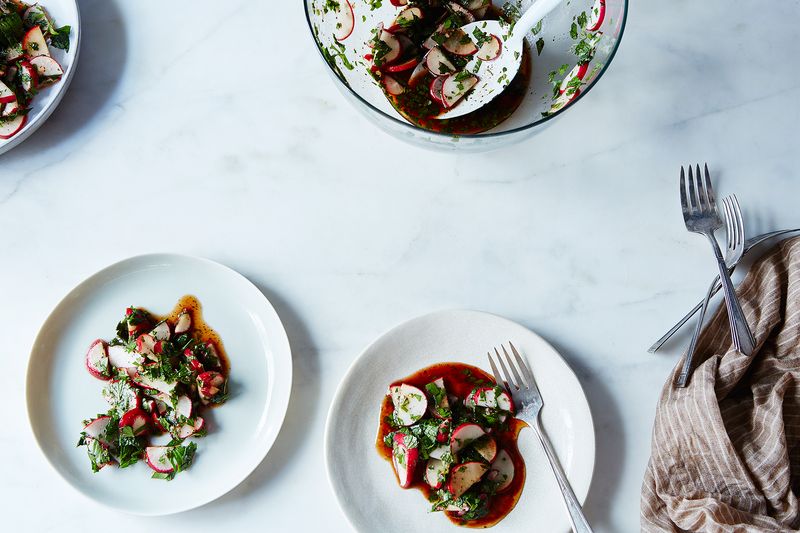 Initially, I couldn't believe that this would be a selling point for Genius Recipes—or for me. I've worked for almost six years for Food52, a company whose values direct us to embrace all the whole foods (and even some of the not-so-whole ones), and whose banned words list includes "indulgent" and "calories" and all references to diets and guilt. 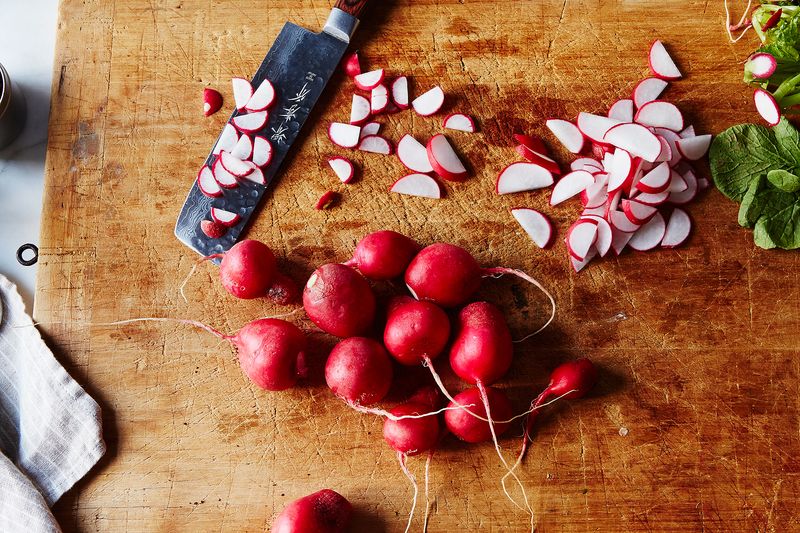 Food52's very first published article, by one Merrill Stubbs, was an ode to Organic Valley butter. "I'm a slatherer. Always have been," she wrote. We're a good fit, because most of my cooking tricks are actually just frying in olive oil. I had cookies for dessert last night and for breakfast.

But even I—and every colleague I fed this salad—fell for a fat-free dressing. We're going to have to update our mission statement! 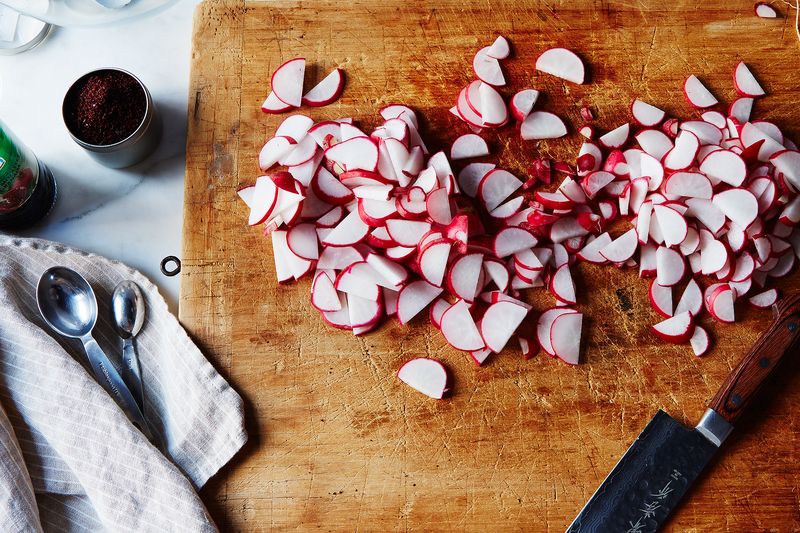 Why leave the olive oil out? The reason is simple. "Like most salads from eastern Turkey," Akin writes in the recipe's headnote, "this salad is prepared without olive oil, as it is hard to get where olive trees are not part of the landscape." In an email, she also pointed out the clues in the recipe's name, Anatolian Gypsy Salad: "It must have been unpractical to carry olive oil or any kind of oil, as gypsies are nomads, and moving with oil canteens would have been not so easy." 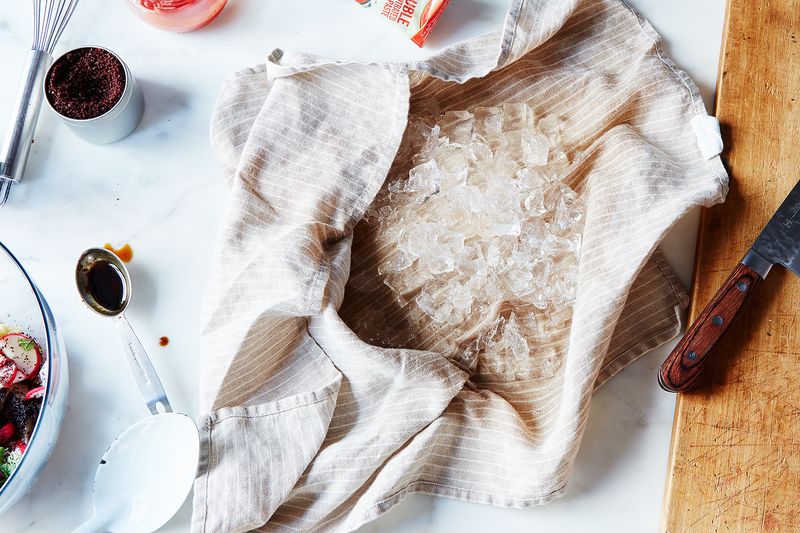 But why does it work so well? For one thing, there's no vinegar or lemon juice, so the dressing doesn't need as much padding as a typical high-acid vinaigrette. Instead, it has an unlikely but brilliant base: tomato paste, pomegranate molasses, and crushed ice. As the ice melts, it keeps the radishes bright and crunchy, but also thins the sweet, musky syrup to be looser, lighter. 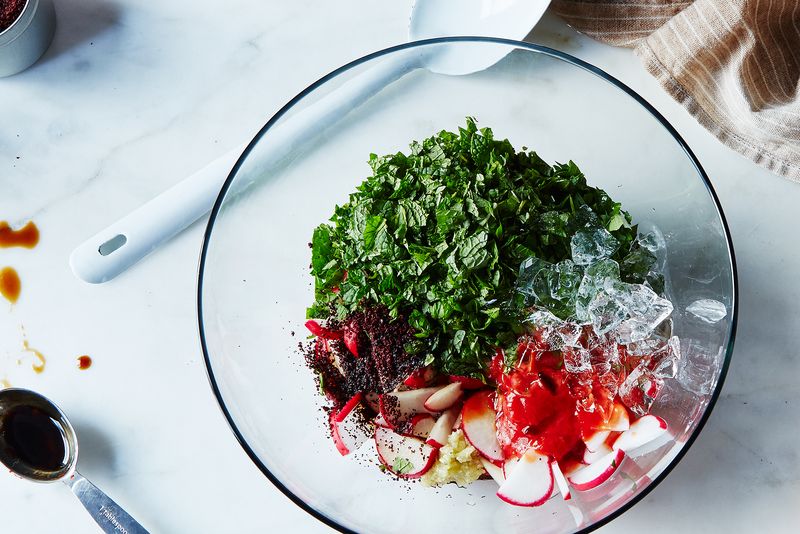 All together, it's as tangy and vibrant as any good salad dressing, but naturally a bit softer and more nuanced than a shot of vinegar. There's also some crushed garlic, some sumac, and a whole mess of herbs—all at full volume, without a muzzle of fat.

Not that there's anything wrong with fat. But sometimes, the indulgence might be in not using it. 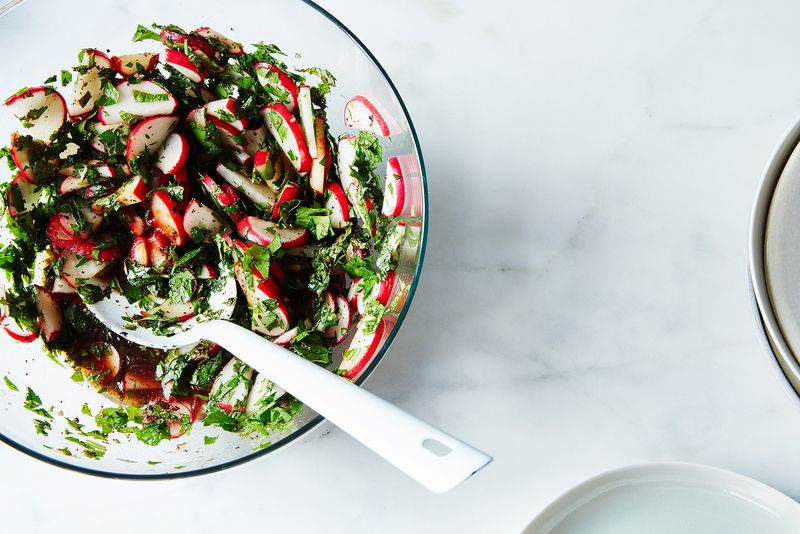 Got a genius recipe to share—from a classic cookbook, an online source, or anywhere, really? Please send it my way (and tell me what's so smart about it) at [email protected]. Thank you to Associate Editor Ali Slagle for this one!

Dasha18 October 22, 2015
Sorry to be a nudge but we can't get pomegranate molasses or date syrup;will anything else work?

Kristen M. October 22, 2015
If you could order a bottle online, you'd find lots of uses for it in other dressings, sodas, cocktails, marinades, etc. Or you could make your own pomegranate syrup by reducing pomegranate juice with a little sugar on the stovetop, then adjust the final dressing to your taste.

Panfusine October 14, 2015
This was a spectacular salad, thank you so much Kristen. I used Date syrup in lieu of Pomegranate molasses (My stock had gone completely dry and crumbly) and in order to include the tartness that the molasses has, added in some tamarind pulp (which in turn made the Sumac redundant). My new favorite way of using up radishes!

Tereza October 14, 2015
I'm rather suspicious of the tomato paste in my salad..

Kristen M. October 22, 2015
I understand, but don't be! It all works together really well.

Panfusine October 14, 2015
Sounds Fabulous.. wonder if I can sub for the parsley with cilantro. I have everything else right on hand.

Kristen M. October 14, 2015
Yes, it's flexible to all manner of fresh salad-like herbs (cilantro, parsley, chervil, dill, fennel fronds, basil, tarragon, mint, all good things). I've tried both the tarragon and mint variations and I'm not sure which I like better! The tarragon is maybe more unexpected.