How to Butter Your Toast

Have I been making toast the wrong way my whole life?

It's a disturbing thought, but one I had to face as I watched Raquel Pelzel demonstrate how to make the cinnamon toast from her book Toast. Instead of buttering the bread after toasting it (a logical order I've followed by whole life), Raquel butters the bread before. 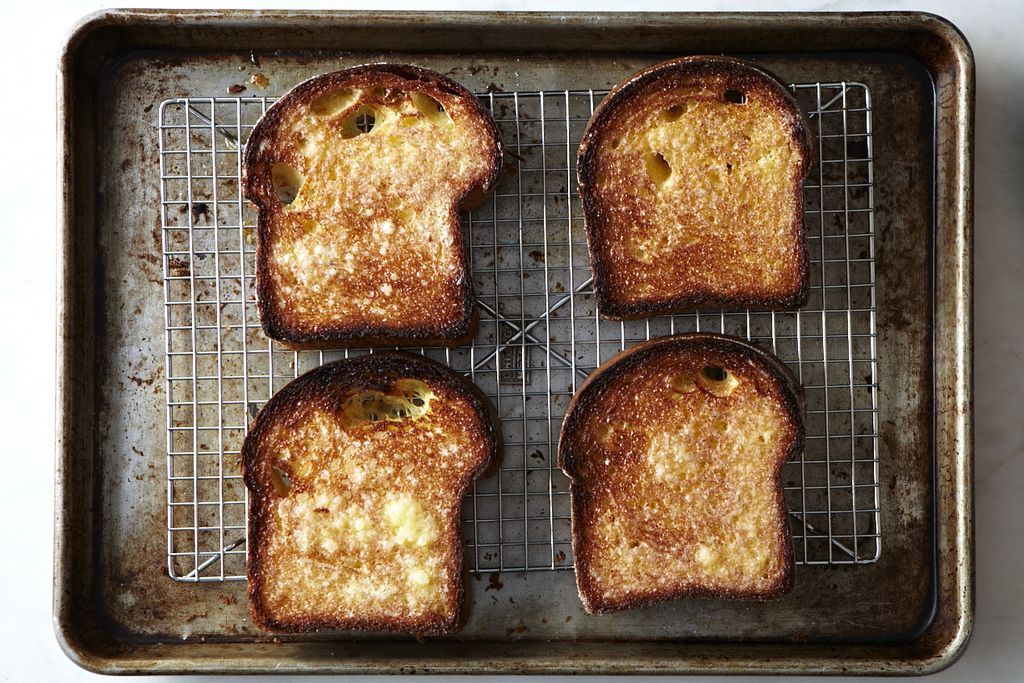 This right here is a photograph of the Platonic toast.

Raquel explained her toast approach in an email:

I like to butter/oil bread before toasting (and salt it, too!) because the bread absorbs the fat—it seeps down into the crumb. After toasting (broiler/grill pan/grill/skillet), the top layer of the toast takes on a glowy/caramelized sheen and a crispness that is so good. Plus all the sugars in the butter caramelize a little.

Bite into the toast and the top layer of bread shatters and then gives way to this more tender—yet still flavorful due to the sponge-like absorption of fat—interior layer. 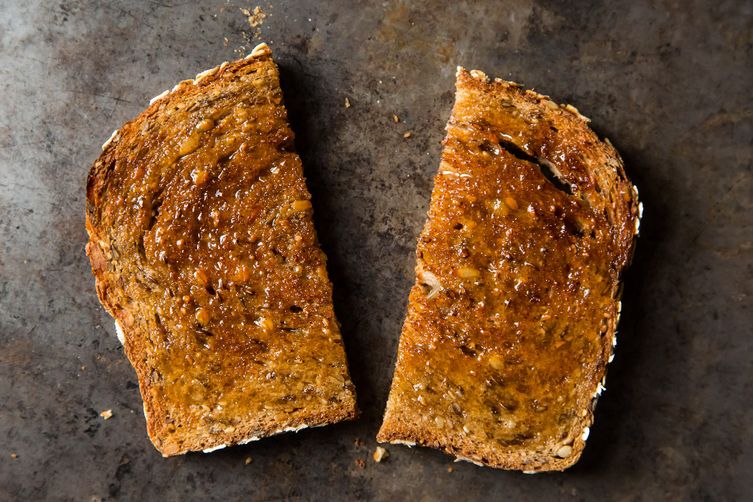 Raquel is convincing, but still I was skeptical, so I asked the Food52 staff about their butter routines.

Lauren said her grandmother buttered her bread pre-toasting but that she had no idea why; Catherine said she pre-butters when she's toasting in the oven; and Jeremy put us all to shame: He does a light toast, then adds butter and toasts some more.

But the most adamant butter-before-toasting advocate was Amanda, who even drew a diagram to explain its magic. 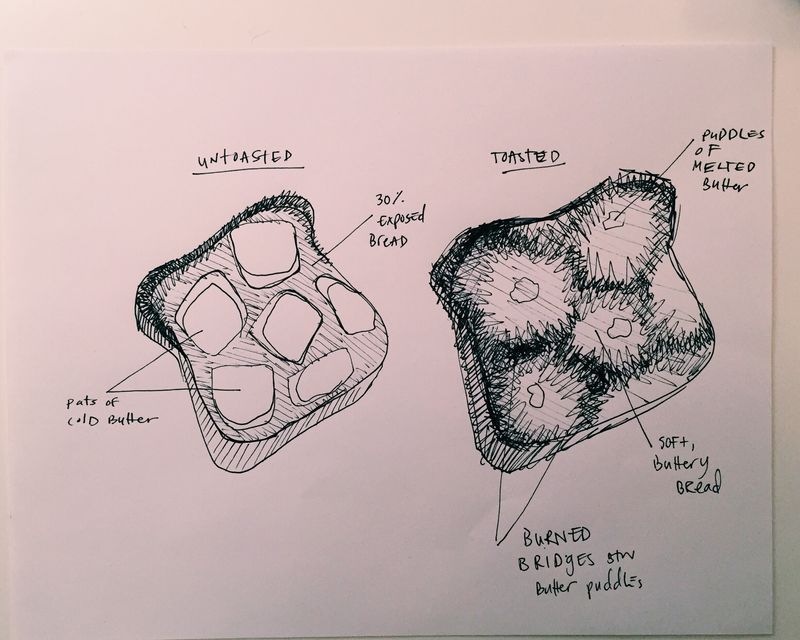 In Amanda's drawing, the pats of cold butter melt into the bread in the oven, creating "butter puddles" outlined by "burned bridges."

1. I tried my experiment first with some bread that the nice people from Le Pain Quotidien had baked at our office earlier that day (yes, we're spoiled!). 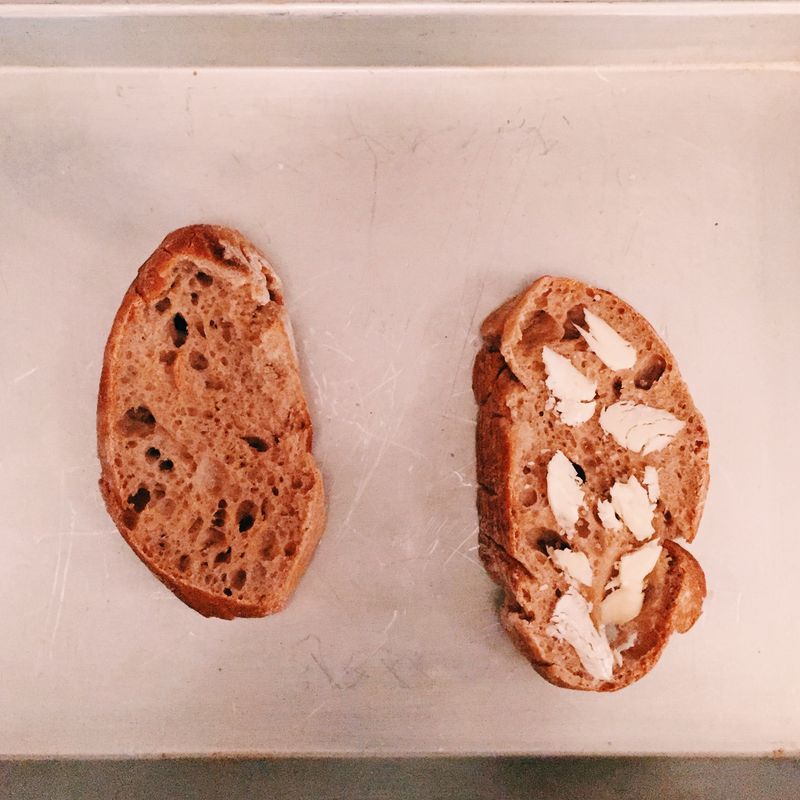 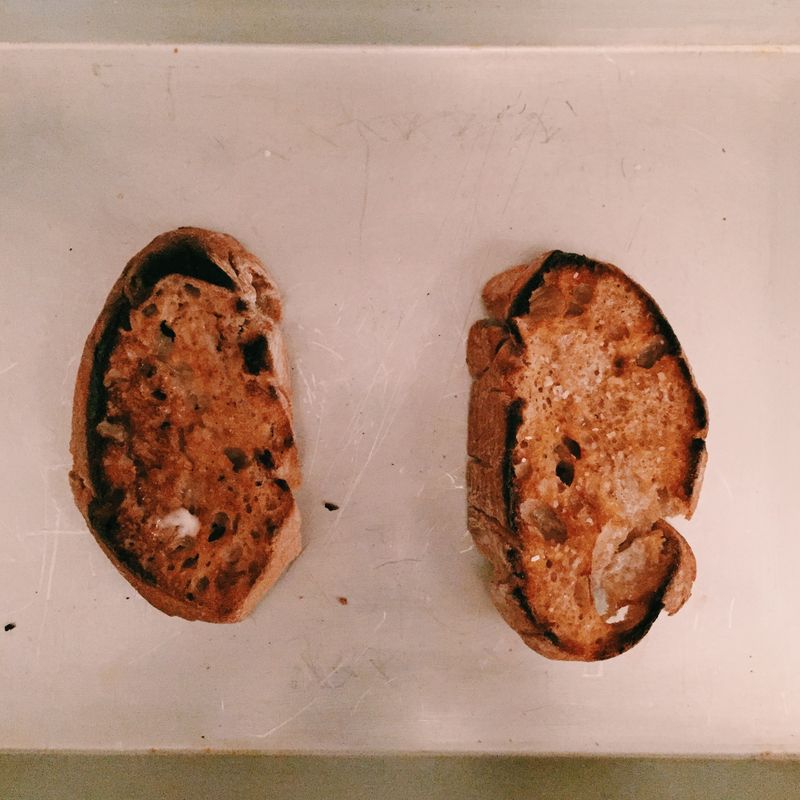 In the photo on the left, you see the slices of bread, pre-broil. On the right, you see the bread out of the oven. The pre-buttered bread was barely lighter in color with no other distinguishable features.

When I asked Amanda and Kristen to taste the toasts and guess which was which, both of them chose wrong! 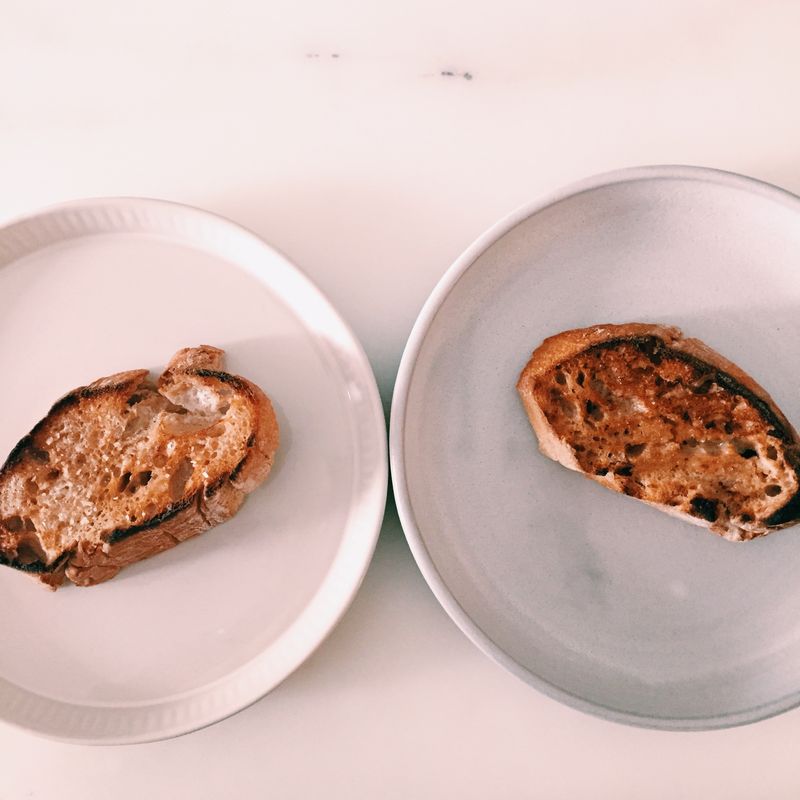 
2. For test two, I tried with a more traditional sandwich bread, hoping the results would be more obvious. 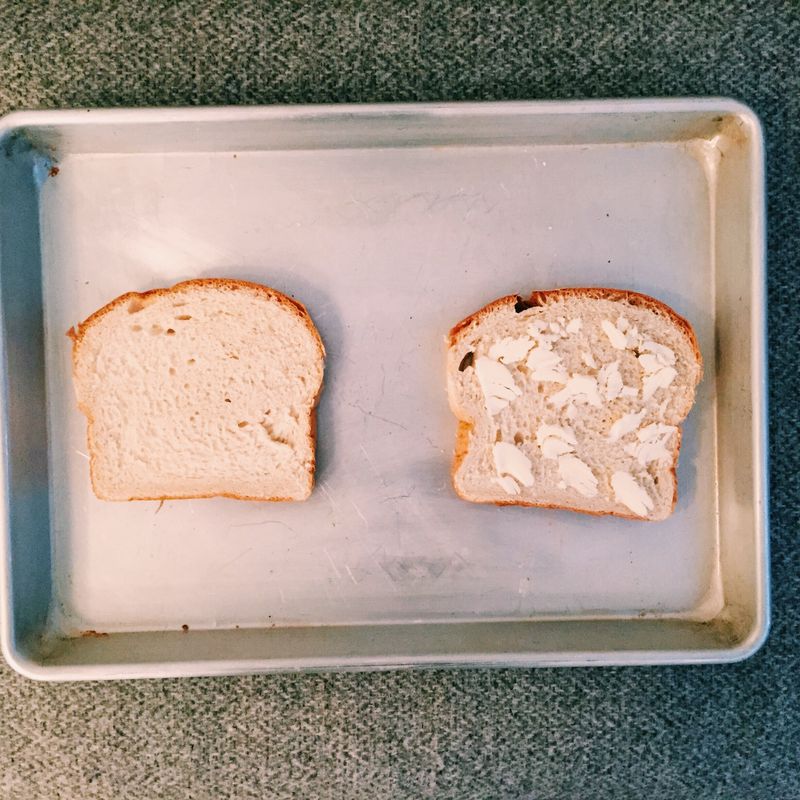 And they were! The pre-buttered bread was much ligher in color, mottled with the very "butter puddles" Amanda Sims had described. It had a richer butter flavor (though, admittedly, I might have applied more butter to this piece) and, with airier innards, a generally more tender texture.

The piece that I buttered post-toasting deflated as I used the knife to rub in the cold butter (which, even against the warm bread, needed assistance melting).

Moreover, spreading on the butter picked up all sorts of burnt and browned crumbs, which contaminated the whole stick of butter (and that's going to keep this neat freak up tonight). 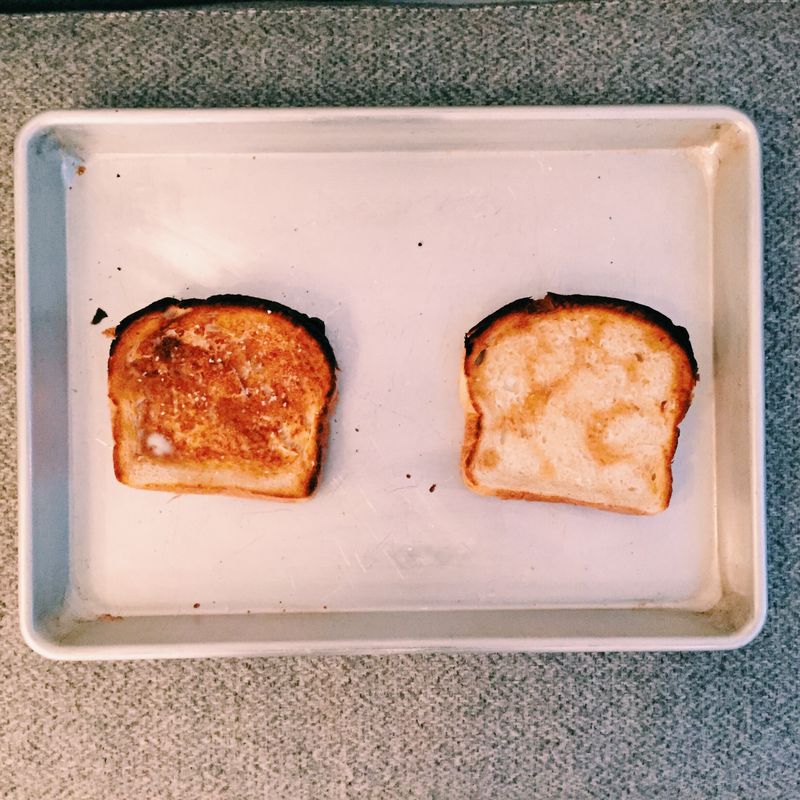 Buttered after toasting (left) versus buttered before toasting (right).

So, yes: Raquel, and Lauren Locke's grandma, and Amanda Sims, and a whole host of others are onto something.

The advantages of buttering your bread before toasting:

But be warned: Don't try this in a pop-up toaster! Raquel cautions that it might cause a grease fire. Pre-buttered toast is so good, however, that we might just have to try this sideways trick from Lifehacker. 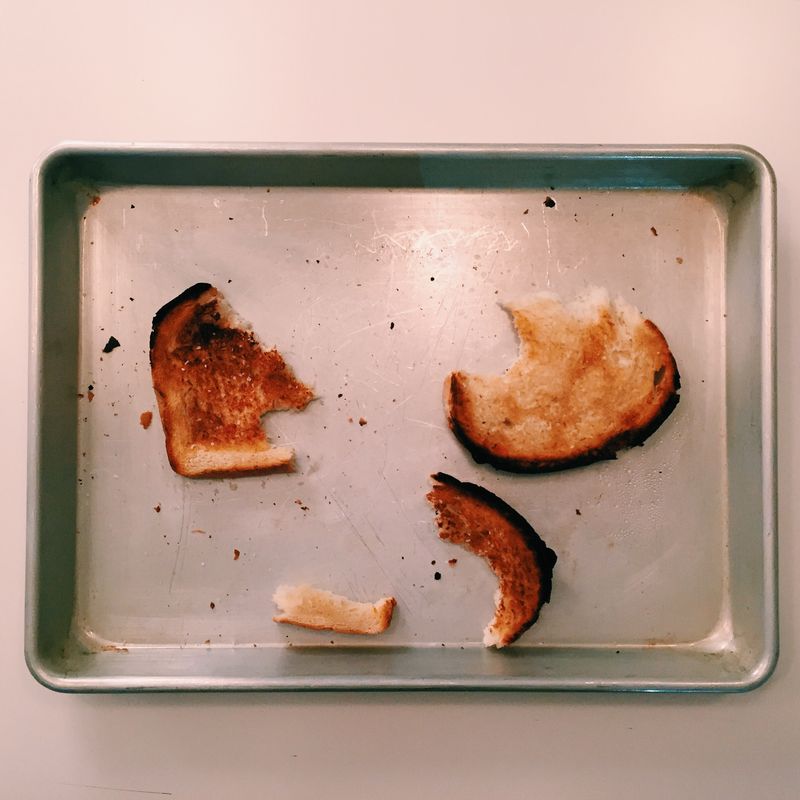 Do you butter your toast before or after toasting? Let us know in the comments below!

Mike S. January 5, 2020
All good but growing up in 70 & 80's toast in upright toaster NEVER went soggy after butter or marg must be all the crap in either or both that industry has added

Cali R. April 7, 2019
I pre butter with room temperature butter so it spreads evenly over the toast from coast-to-coast and put the oven on broil. It's the absolute best!

Linda June 13, 2018
During power black outs, nothing tastes as comforting as browning, sizzling buttered toast in a cast iron skillet on top of your wood stove, while cracking a few eggs to sizzle with them - just like breakfast at Grandmother's house. And of course, coffee made in a percolator!

Jim L. April 28, 2018
Butter bread and toast in a skillet like you would do making grilled cheese sandwiches

Yvonne D. April 26, 2018
This reminds me of the “toasted biscuits” I had growing up. We’d take day-old biscuits, split in half, butter them first, and toast in the oven. I LOVE butter puddles. Warm and nutty flavored. Day-old toasted was better than fresh out of the oven!

Andrew P. March 26, 2018
Im a post-toast buttered. But it should be noted that cold butter is the worst for bread regardless of wether it's done pre or post toasting. Room temperature butter spreads without damaging or squishing the bread and melts very quickly on hot toast.

Joyce K. March 13, 2018
I set my toaster oven on Broil, and place a quartered pre-buttered bagel in there and toast until golden. It DOES make a difference.

Jade E. March 3, 2018
We didn’t have a toaster growing up. I thought this is how everyone made toast, until collegeI think.

Janet M. December 23, 2017
I've done it both ways--in the oven when fixing toast for a crowd, or in the toaster when it's just for me or the two of us. There is no doubt about the oven toast deliciousness, but it does take longer. It is the only way, however, to make cinnamon toast!

Marie N. September 26, 2017
My mom always made toast pre-buttered & I loved it. I didn't know there was any other way to make it until I left home. Hers had the 5 pats like one in the article. By the way, you don't have to leave the toast until those 'bridges' have almost burned. Watch it more closely & remove the toast from your oven or toaster-oven before it gets too dark, seems like common sense to me. Another thing is that if the pats are too thick you'll have greasy, wet toast which isn't pleasant to eat. I prefer to use room temperature butter dotted on all over with smaller 'bridges' but, they are definitely important. You can spread the butter all over but go lightly so that the butter will brown some, otherwise the toast will be wet & greasy with this technique as well. Pre-buttered does require a bit more effort but it is so worth it.

Kim July 27, 2017
I pre-butter, but I don't toast it, I griddle it. Very low flame, and invert a stainless bowl over it as a makeshift oven. A lot of trouble? Maybe...but it's pretty good 😊

sandal July 27, 2017
These are different foods for different occasions, not a better or worse scenario. Butter after for decadent, buttery goodness since the butter is intensely concentrated on top, butter first for maximum absorption and perfectly crisp top crumbs, butter first and fried in a cast iron pan for uniformity and crunch.

And no cold butter, ever. That ruins everything.

Gabriela G. July 27, 2017
I've always prebuttered my toast and have probably shortened the life of a few toasters as well. (Just stand nearby in case there's smoke ;-).)And, if you have the counter space for one, invest on a toaster over. That is THE BEST tasting toast of all.

Hilary July 27, 2017
My stepfather always did it this way for us...the best tool for the job is the toaster oven.

Terry July 3, 2017
No toaster, huh? This might be a use for my antique Glenwood's vertical broiler, as drips were anticipated in the design. Have to wait 'till we're in our next house to try it out, but thanks for the idea!

Bholshouser August 7, 2016
Pre-butter but always melt the butter and spread with a pastry brush so that every bit of bread is covered. I'm not a fan of the burned bridges. ;)

Lesley P. August 6, 2016
Since I never ever have butter in the refrigerator pre-buttering id never a problem .You can slather as much on as you want.Thick sliced,heartier breads like French come out dreamy.

Donna H. August 6, 2016
I dunno, this looks like burned toast to me, not very appealing. I get the more butter idea though, I'm all for that! Just no burned stuff please

Penny H. August 6, 2016
When I was a newlywed in 1957, my husband wanted me to melt butter and lightly butter his toast after toasting - extra work and a pan to wash. Instead, I would lightly toast the bread, rub it all over with a stick of butter, then put the bread back in the toaster and re-toast if it needed it. Would work just as well with broiler toasted bread. I keep a stick of butter for just this purpose. I've been doing it this way ever since and never had a complaint.