To Lemons—and Beyond! Other Citrus to Preserve Before We Say Goodbye

Preserved lemons, we understand your magic. And we could make a jar at home with our eyes closed. So why did it take us so long to think about preserving other types of citrus?

The inspiration comes from this lovely post on our new app, (Not)Recipes, from Alana Chernila: 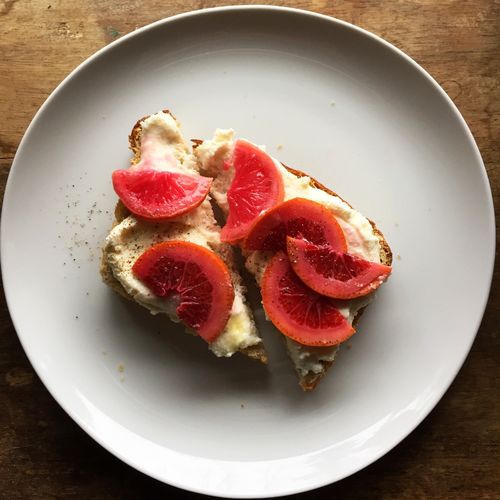 alana_chernila over 6 years ago
58
This is sourdough toast with ricotta, then preserved blood oranges (yes!), honey, and black pepper. #breakfast #notarecipe
6 comments

Even Alana, who was written two books—The Homemade Pantry and The Homemade Kitchen—all about foods, like chèvre, tofu, kefir, kimchi, and yes, preserved lemons, to stop buying and start making—had never preserved another fruit.

The preserved blood oranges were a gift from her friend Janet, who made them by mixing 1 part sugar to 3 parts salt, then alternating blood orange and lemon slices in a jar with the salt-sugar mixture. She topped it off with lemon juice, covered the jar, and left the fruit to ferment on the counter for a week before moving them to the refrigerator and waiting for several more.

So what other citrus can be preserved? It's a question at the front of our minds now that the citrus season is nearing its end—and one that David Tamarkin addressed over on Epicurious last year.

Top Comment:
“I chop preserved fruit and add to my pound cake recipe...along with nuts and fresh fruit...the tang of the preserved fruit makes it unique.”
— Kathy M.
Comment

David concluded that as long as you stick with topping the jar off with lemon juice—you need the acidity—the process of salt-curing citrus fruits (kumquats, limes, clementines, tangerines, Meyer lemons, grapefruit) is the same:

Amanda Feifer, author of Ferment Your Vegetables and the blog Phickle, recommends seeking oranges and grapefruits with thin skins. The thicker the skin, the longer they'll take to smooth out (her preserved grapefruits and oranges took almost two months, but the limes took just one).

If you're preserving citrus other than lemon, Amanda also recommends keeping extra lemon juice on hand for troubleshooting:

When you do your daily shake and smash, give it a sniff. If it smells like some kind of citrus crack you can’t stop sniffing, all is well. If after a few days, it starts smelling slightly alcoholic, like an ambrosial arancello (or whatever the lime and grapefruit versions are called), add another dash of salt and a little squeeze of lemon juice and check back the following day.

And, while you're experimenting with all sorts of different citrus fruits, don't forget that you can add spices and other seasonings, too.

How to use your preserved citrus? (That is, when it's ready—next month.)

What's the most creative use you've seen for preserved citrus? Share with us in the comments below!

Marmalady March 30, 2016
I love this idea! Any other (vegan) ideas on what might go well on toast? Tahini?

jpriddy February 16, 2018
Many breads are eggless. A baguette, for example, is only flour and water and salt and yeast. A little olive oil makes it something else.