Our Creative Director Kristen was shocked to find out that I don’t peel my fava beans, so maybe I will rock your world, too.

This is not because I am lazy or busy or more preoccupied with shelling peas—it’s because I actually prefer them with their wetsuits (as Kristen calls them). 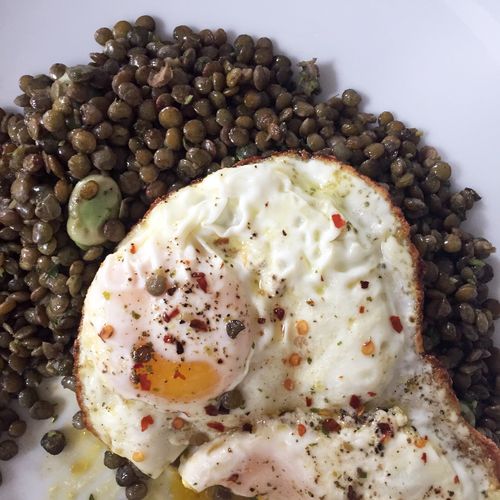 Ali Slagle over 6 years ago
27
Warm leftover lentils perked up with green sauce and fava beans (no, I don't peel them). Add a genius fried egg on top made with chili flakes instead of paprika (link below).

And I’m not the only one. The permission to go the easy route and only remove the pod and not the white-ish skin came from a few places: One, my mother does not peel favas, so because my mom said so. She likely learned not to from her Tuscan-born mother, as most of Italy, Spain, and Britain don’t peel their favas.

Two, Ignacio Mattos’s Genius Grilled Favas teaches us to eat the whole dang bean—with a fork and knife, or animal-style with our hands. He does advise to seek out the most tender fava beans at the market so their skins aren’t quite as tough, but I’ve never bothered.

The most convincing evidence for skin-on favas, however, came from the beef meatballs with fava beans and lemon recipe in Jerusalem, in which half the fava beans keep their skins on while the others are denuded. As you eat your way through the (very good) sauté (that you should really make), you’re able to do a side-by-side comparison of the favas both ways: At first bite, the ones with the skins on are like Marcona almonds: silky, oily, earthy, but firm. They then give way to melty-creaminess on the inside, like the middle of a ball of Burrata.

In your next bite, the naked beans will seem too soft, without any resistance to remind you that they’re even there. Why did you just spend so much time skinning these suckers if they won’t even show off?

So don’t let fava bean season pass you by yet again. This year, gobble them, and a little more fiber and flavor, with a whole lot less cursing. Tackle any recipe that calls for fava beans, with one less step—there are some recipes to get you started below.

(For those of you worried about the amount of roughage the skins provide, know that my stomach has never hurt after eating them—but maybe it’s because I was too happy to be eating spoonfuls of favas.)

amq June 28, 2016
at my Brooklyn farmers' market, favas have only Just arrived on the scene (they often have another round at the end of the summer), so perfect timing! and I'm definitely trying unpeeled favas ASAP

monkeymom June 28, 2016
I was recently served grilled young fava beans at a restaurant and was very disappointed. The best part is truly the inner bean. The rest is edible but not enjoyable.

Valhalla June 28, 2016
I am still skeptical--and I have tried it, even with home grown and farmers' market favas, the large beans have unappetizing tough skins.
Grilling them was a revelation, but I cannot imagine eating the pods either.

702551 June 28, 2016
Trust me, the smaller pods are in fact edible after grilling/frying. We have both touched on, the larger beans have tougher and more bitter skins that simply aren't appealing. Same with the bean pods.

You *MUST* use the smaller favas if you want consume the skins or pods.

Again, this post would have been more timely in April, not late June.

ncindc June 28, 2016
Worth noting: like grapefruits, favas contain compounds that interact with some medications, so double check before you nosh!

When I have a mix of sizes, I will often leave the skins on the smaller beans on, while deskinning the larger beans.

As for eating the whole beans (including the pod/seed case), the way to do this selecting the smaller beans -- the ones about as thick as a finger -- and deep frying them, tempura style.

702551 June 28, 2016
Sure would have been better to read this in Apri, not late June. Fava beans are basically done here in NorCal farmers markets, and have been for several weeks.