Today: Nicholas proposes that the only reason children don't like vegetables is because they don't have enough anchovy. 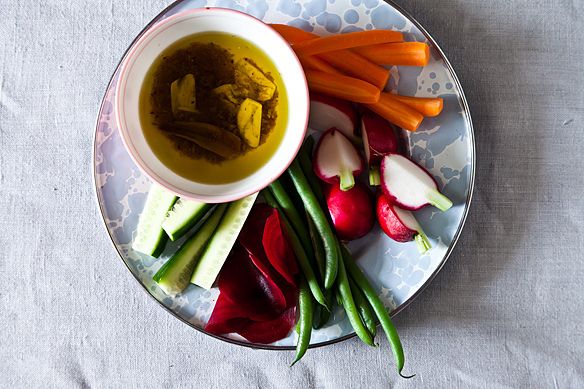 Have I lost you already? Why are you setting the table with four jars of peanut butter and four knives?

This isn’t high-brow. This is desperation. This is lowest-common denominator. This is pandering. Don’t think bagna cauda. Think Piedmontese hummus. 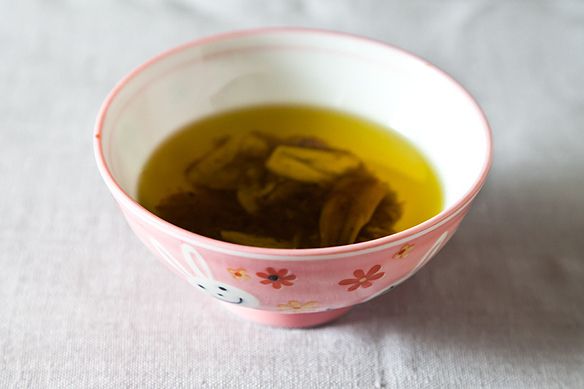 Bagna cauda, of course, is the warm bath of garlic-anchovy oil that Italians dip vegetables in. (Also, some New Yorkers at dinner parties.) For kid-feeding purposes, though, it has three strikes against it: garlic, anchovy, vegetables.

So let’s try a word-substitution game: for garlic, think cream (seriously: the garlic here is boiled and then mashed). For anchovy, think salt. For vegetables—well, OK, think vegetables. 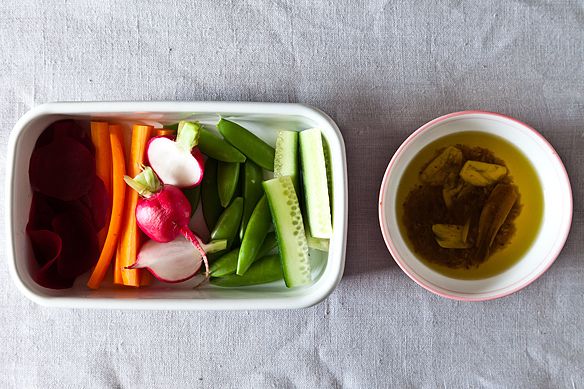 The idea of bagna cauda for kids came about because the pleasures of raw spring and summer vegetables are the hardest thing to communicate to a child. They’re very grown-up pleasures. (Unless you’re in the garden picking said vegetables, in which case you win.) Let’s face it: salad is usually a non-starter. Bagna cauda is an attempt to rethink seasonal vegetables for the youngest generation. It’s a new frame around an old problem. It’s not a solution, but it isn’t a stunt either.

Of course, if you are feeling uncharitable, you may be tempted to point out that once, when we were desperate to entertain Isaiah while grocery shopping, we gave him a head of garlic to play with in his stroller and when we looked down a minute later, he’d eaten half the head. But that was years ago now and the garlic for this bagna cauda is poached until tame. (The recipe’s from Jessica Theroux’s Cooking with Italian Grandmothers.)

You might also point out that I have a known fixation with small fish. This is true, too. 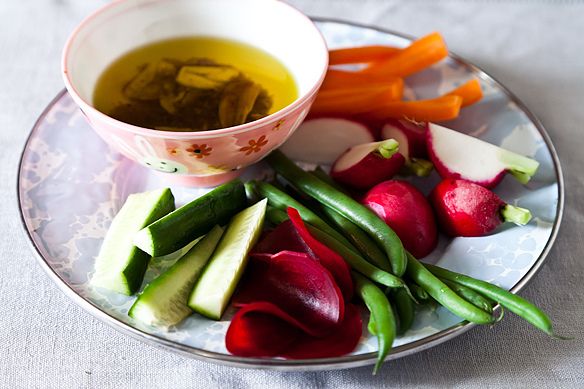 But my predispositions aside, I have an air-tight, alliterative case for why bagna cauda works:

Children are incorrigible dippers. Despite our best attempts to stop him, Isaiah is no different. By the end of his dinner, his plate sometimes looks like the Jell-O I grew up eating as a side-dish in Wisconsin, with various unlikely vegetables suspended in it. Like fondue, bagna cauda legitimizes dipping. It’s like getting to eat dinner on backwards day.

For ours, we used beets, cut thin and blanched; asparagus, also blanched; and some sugar snap peas and carrots, the latter cut into sticks. But use the best raw (or blanched) vegetables you have or the ones your children are most likely to eat. (These aren’t always the same thing, of course.)

And if it fails as part of dinner, think of it as entertainment.

Serves 6 as an appetizer

SusanRubinsky June 27, 2012
Are you kidding me? This is really just raw veggies & dip. Everyone, all ages loves it!

dmass June 26, 2012
I grew up on this dip and loved it as a child. Seeing it here brings back fond memories. One of my favorite vegetables was celery. My Mom would give us the tender hearts with the tops still on. It was such fun to swirl the tops in the dip and then drip it on some fresh Italian bread. It's still one of my favorites. Mmm...

willsmom June 24, 2012
It's a fuzzy morning to be sure - but is there a recipe? I love the idea. I have grown-up friends who need to eat more vegetables. Perhaps this would help them out?

Muriel June 24, 2012
Figured it out, go to the site she suggests, you can click on the cookbook and go thru page by page. You can enlarge to read and if you hit full size, or whatever the phrase is - the left button, it also gives you a print option

FrancesE June 24, 2012
When my children were small, I had "cocktail parties" for dinner occationally. Small pieces of meat, cheese and vegies w/colored toothpicks in them, on a nice platter. They loved and ate all of it. Also were big fans of fondu-dipped anything. Nice memory.

em-i-lis June 21, 2012
This reminds me of a high-brow version of pinsimonio, a Tuscan appetizer of freshly cut vegetables that are dipped in room temp olive oil into which a decent amount of kosher salt has been poured. So simple, but so delicious. I served it as an app recently and could tell my pals -foodies!- were a bit skeptical. But they were immediate converts. Wonderful!
Love bagna cauda!