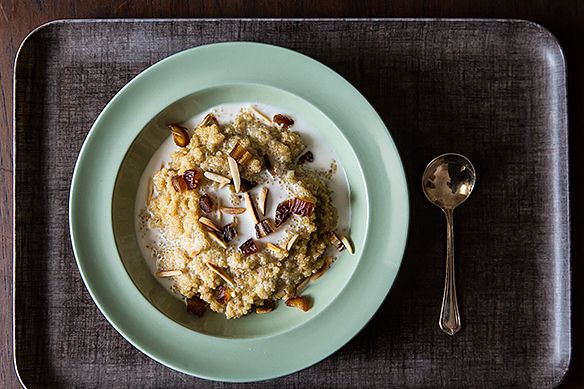 One of the main questions I'm asked is "what do vegans eat for breakfast?" Believe me when I say that mornings without eggs or Greek yogurt do not lack for nourishment or gustatory delight. But say the word "porridge," and you'll get one of two responses. For some of us, the word evokes visions of bright winter mornings, piping hot bowl of nourishment in hand. To me, warm breakfast cereal is one of life's greatest culinary pleasures: those are big words, but that's really how I feel. For others, the word "porridge" deposits us at the door of a Dickens orphanage, drudging up childhood memories of bland, starchy cereal we were forced to eat because "breakfast is the most important meal of the day."

If you've had a terrible porridge experience in the past, you may need to consider the possibility that you just didn't try the right kind. If you cringe just at the memory of plain, soupy cream of wheat from your childhood, fear not: hot breakfast cereal is incredibly versatile. Different combinations of spices, sweeteners, toppings, and fruits can make an enormous difference in taste, and it's easy to customize your breakfast to suit your tastes. 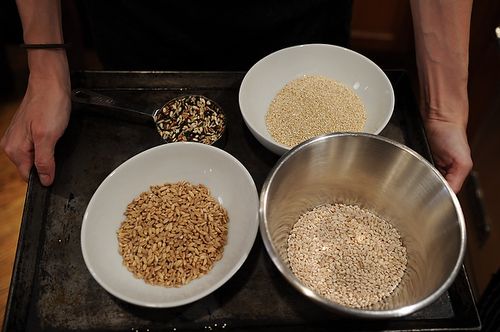 I'm likely not the first person who's told you this. But I may be the first person to point out that, just as you can vary the toppings you place on your warm breakfast cereal, so too can you experiment with different grain bases. Oats and wheat are certainly not your only options. Ancient and heirloom grains like amaranth, quinoa, teff, and millet are perfect for those of you who despise oatmeal; they're also great news for those who are gluten free, because traditional oats are susceptible to cross-contamination (unless you purchase certified gluten free oats, which are available widely).

It's worth noting that any cooked grain you have on hand already can be turned into porridge; no need to cook them up specifically for breakfast. Just heat a small amount of non-dairy milk (3/4 cup, say) in a saucepan, and then add any cooked grain you have on hand (for example, leftover brown rice). Allow the grain to soak up the milk, and then add your toppings of choice.

Creative grain bowls are delicious, filling, and packed with the fiber and protein that are so vital for sustained energy throughout the start of the day. Here are some of my very favorite morning grain bowl ideas. As you'll see, they're a far cry from breakfast as usual! 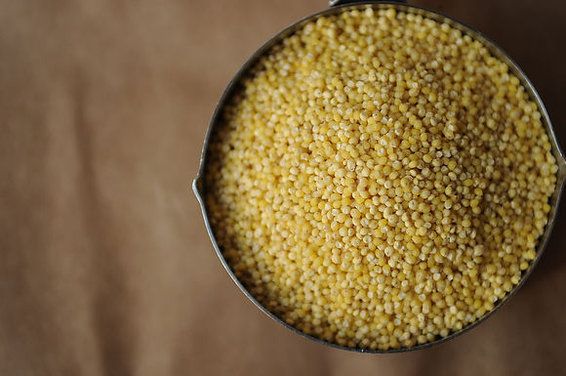 1. Carrot Millet - Millet is a delicious, nutty grain that's indigenous to Africa, Asia, and India. The idea to infuse it with carrot comes from the wonderful vegan restaurant Angelica Kitchen in New York City.
• Bring 1 cup millet, 1 cup water, and 1 1/2 cups carrot juice to a boil with a dash of salt. Simmer till millet has absorbed all liquid and is fluffy, orange, and sweet.
• Toppings: Dried apricots, pumpkin seeds, and a little maple syrup.

2. Banana Pecan Oats - We've all had oatmeal topped with banana, but not everyone has experienced how glorious oatmeal can be when cooked with it.
• Make rolled or steel cut oats according to package instructions, but add cinnamon and a small chopped banana to the mixture while it's simmering. The banana will break down, get creamy, and sweeten the cereal.
• Toppings: Toasted pecans, maple syrup, and extra banana, if you wish; I like to drizzle mine with coconut milk or peanut butter, too. 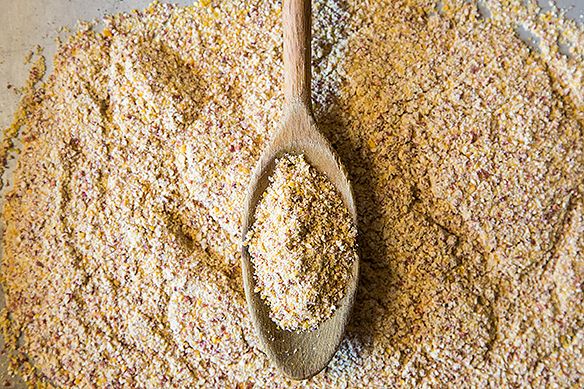 3. Breakfast Polenta - Think grits, but sweeter.
• Bring 2 cups water and 1 cup non-dairy milk to a boil with a generous pinch of salt. Add 1 cup polenta and reduce heat; stir constantly till polenta has absorbed all of the liquid. Add more milk as needed.
• Toppings: Fresh fruit, apple or pumpkin butter, a berry compote, or even a few spoonfuls of homemade preserves.

4. Kasha with Walnuts and Blueberries - Kasha is roasted buckwheat, and has a wonderful, nutty flavor.
• Bring 2 cups water to boil along with a pinch of salt, and add 1 cup of kasha. Reduce heat to a simmer and cook, stirring periodically, till kasha is fluffy and water is absorbed.
• Toppings: cinnamon, raw or toasted walnuts, and fresh blueberries. 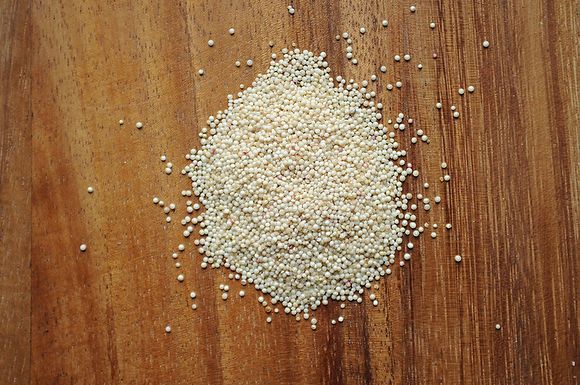 5. Sesame Fig Amaranth porridge - Amaranth was a staple food for the Aztecs, and it is becoming popular for its outstanding nutritional profile (relatively high amounts of protein, iron, and calcium, compared to other grains). I confess, this tiny grain is not my favorite, but I love it when it's cooked up to be creamy and sweet.
• Bring 2 1/2 cups water and a pinch of salt to boil and add 1 cup amaranth. Reduce heat to a simmer and cook for 20 minutes, or until liquid has absorbed. Add 1/2 cup non-dairy milk and keep stirring till absorbed.
• Toppings: fresh figs and sesame seeds.

If none of the options above are making you hungry, why not give my favorite non-traditional breakfast grain bowl a try? Quick, satisfying, and oh-so-delicious, this rich quinoa porridge with coconut milk, dates, and toasted almonds will make you a hot cereal convert. 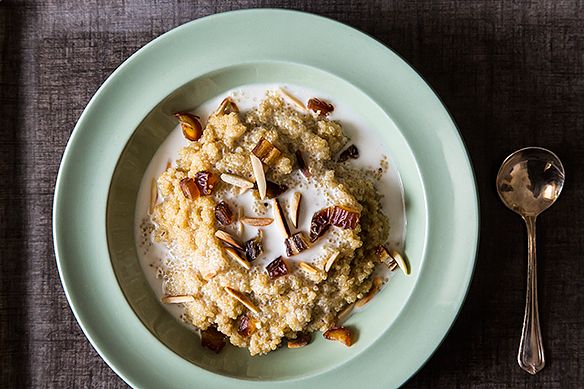 Heelaine April 27, 2013
Hi :)
I'm living in France, near Lille ! I find your recipes soo tentalising , thus I'd like to know in what kind of shop (even e-shop) I could find banana pecan oat ?
And Please excuse my english :s
Helen.

Blixie October 6, 2012
I keep a grain mix on hand to make porridge out of: quinoa, kasha, and millet. It's my go-to winter breakfast. I'm not vegan, so I usually saute the grains in butter before adding the water. I just add whatever nuts and fruit I'm in the mood for. My 16 month-old loves it too!

zora October 4, 2012
During the winter, I often make spiced steel-cut oats cooked with banana, a vanilla bean, a cinnamon stick, a slice of fresh ginger, some cardamom, a hunk of orange zest and some nutmeg. I throw in some golden raisins, or dried apricots, or dried cherries if I feel like it. And cook it for a long time on a flame tamer, like an hour. People who have eaten this are very happy. (I like mine with almond milk, even though I am not vegan.)

Kristy M. October 4, 2012
I used a mix of millet and amaranth to make the almond and coconut porridge, and I'm in love!

Nozlee S. October 4, 2012
Cooking millet in carrot juice is blowing my mind. I'm so excited to try these!

AntoniaJames October 4, 2012
So many great ideas, here! Thanks for another informative and helpful post. I'm a big fan of savory whole grain porridges in the morning, as can be seen in the four recipes I posted here, most of which are adaptable as vegan or not: http://food52.com/recipe/antoniajames%20porridge Looking forward to trying some of these new ones here! ;o)
Author Comment

Gena H. October 4, 2012
Thanks Antonia! And now I'm off to explore your savory recipes!

jbban October 4, 2012
Great article! Porridge is so versatile and delicious. In Good to the Grain, Kim Boyce also has some interesting versions, with various compotes to top them.

Leslie October 4, 2012
I've recently discovered farro and love it in salads, stuffed vegetables, all sorts of things. Do you have a favorite recipe with farro?

Leslie October 4, 2012
I had the tuna with arugula, radicchio, beans, and a fantastically light balsamic dressing. I'm saving the kale salad for next time. The owner is from Vienna (Austria, not VA), so there's a European feel to the menu. The Meinl coffee is not to be missed. It's off Cady's Alley.
Author Comment

Leslie October 4, 2012
Gena, have you tried the kale salad at Leopold's in Georgetown?
Author Comment