Today: The quickest, most adaptable lentil soup you can whip up all winter -- make a double batch and freeze it in anticipation of darker days. 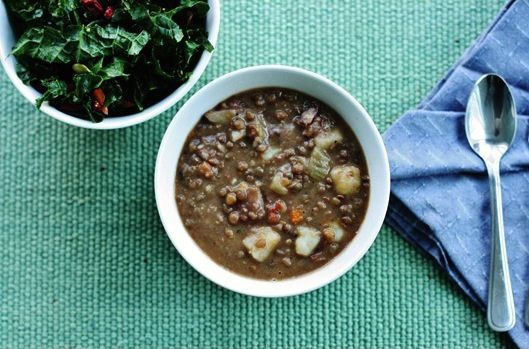 'Tis the season for soups and stews. While there are tons of vegan soups I love to make as the weather gets cooler -- acorn squash, pumpkin, cream of broccoli, chickpea noodle -- lentil soup is one of the easiest and most nutritious options. The soup below, which is an even simpler adaptation of Susan V’s ridiculously easy lentil soup, is just about as quick and easy as you’d imagine. I halve the recipe in addition to adapting it, since I live alone, but you can easily double what I suggest and freeze leftovers.

More: Another vegan lentil soup from Gena, and Another Vegan Lentil Soup With Sweet Potatoes & Kale, which you'll want in your freezer during the depths of winter.

I start by sautéeing onions and chopped carrots in about a tablespoon of olive oil. I add 2 cups of chopped potato, some seasoning (oregano, thyme, some Herbamare), a cup of lentils, a can of chopped tomatoes, and 3 cups of broth. I let it all simmer for 35 to 40 minutes, season to taste, and serve, adding more broth as needed along the way. Avocado chunks (I like to call them croutons), toasted pepitas, or a simple drizzle of olive oil all make great finishing touches.