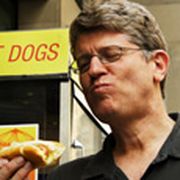 Online food media entrepreneur author, and food personality Ed Levine (whom Ruth Reichl deemed the "Missionary of the Delicious"), founded Seriouseats.com in December 2006. Deemed the "gastronomic supersite" by the New York Times, Serious Eats is devoted to the pleasure, culture, and business of food. It is a unique combination of blogs, original content, video, social network, and community-created food conversations, all put together by some of the most authoritative names in food and new media.

Thanks a lot, food52. You put me and Serious Eats' Cook the Book Columnist, Caroline Russock, in a real tight spot, namely, determining a winner in a cookbook battle between two of my favorite restaurant chefs, Louisiana chef-restaurateur Donald Link (Cochon, Herbsaint, Cochon Butcher), and chef-of-the-moment and reluctant Momofuku empire builder David Chang. When someone asks me where to eat in New Orleans these days I invariably tell them Cochon or Cochon Butcher, and just the other day I referred my umpteenth friend and/or colleague to Chang restaurants Ssam Bar and Noodle Bar, so I had a feeling conducting this competition was going to be an exercise in exquisite food torture.

In Real Cajun Donald Link shares recipes from his Acadian upbringing that helped shape the more refined New Orleans style cooking that he has become known for. Link introduces us to his fishing buddies, backcountry butchers and family members whose recipes and techniques have become integral parts of Link's culinary repertoire. Real Cajun is broken down into six chapters, beginning with La Vie Cochon, a guide to all things pork related, with plenty of tasso and boudin. The following chapter is devoted to Louisiana native seafood, covering far more than the ubiquitous crawfish. Chapters three, four, and five are devoted to family gatherings and outdoor cooking, ranging from holidays to game day feasts to less joyous occasions such as funerals and meals that Link and his staff shared during the aftermath of hurricane Katrina. The final chapter, Louisiana Sweet Tooth, confirms the fact that Louisiana has a serious soft spot for sweets. By the end of Real Cajun you'll feel closer to Donald Link, while it is a cookbook first and foremost, there are elements that make it seem like an autobiography though food.

Momofuku would be a great book even without the recipes. Peter Meehan tells the concise and often times hilarious story of the rise of David Chang's accidental Asian-American fusion empire, Momofuku. It's a funny and surprisingly self-effacing narrative that just so happens to include all of the recipes that made Momofuku into the cult restaurant empire that it is today. The story and recipes are set up chronologically, from the first bowls of ramen served at Noodle Bar, to the bo ssam dinners at Ssam Bar, the frozen foie gras that made a reservation at Ko nearly impossible and cereal milk that begat Milk Bar. Oh, and there's a recipe for the pork buns, too.

Caroline and I decided that one way to set up the competition was to see if they each had a recipe for the same dish. I knew that one thing Link and Chang shared was a love of pork, so we were not surprised to find a pork butt recipe in each book, Link's Smothered Pork Roast Over Rice, and Chang's justifiably famous pork piece de resistance, his Bo Ssam. I had eaten fried chicken in both Link's and Chang's restaurants, so I was fairly confident that we would find fried chicken recipes in both books. And we did. Caroline volunteered to do the shopping and cooking, and I volunteered to do the eating and writing, with major input every step of the way from Caroline.

One week later, a monumental dinner was served at Caroline's house.

Caroline: Both pork butts turned out wonderfully. The Link butt was super savory and the gravy was rich and fatty. The combination of thyme, onions, garlic, and butter gave it a Thanksgiving turkey flavor. The Chang butt was the more visually impressive of the two. It was big and burnished and the sugar added for the last fifteen minutes of cooking gave it a porky, candy-like crust. As far as I'm concerned, a draw.

Ed: Food-wise, I would agree. Two completely different preparations both yielded deliciously satisfying results. Link's pork roast was a little homier and more savory, but Chang's bo ssam was a startling and original dish. Both these dishes were so good I would strongly consider them as last supper candidates.

Caroline: As far as the chickens go, the general consensus was that Link's was clearly the winner. It was juicy, perfectly spiced, and the crust was everything that a great fried chicken crust should be. There are a million ways to make fried chicken but the buttermilk soak is probably the best technique out there.

Even before I started the Chang chicken recipe I was concerned. Forty minutes of steaming plus a deep fry seemed like a recipe for dry chicken, and it was. During the steaming process I could see all of the fat seeping out of the chicken and into the water below. The chicken was nothing to write home about, and the ginger scallion sauce was its saving grace. I think that Chang's chicken probably would have been more well received if it hadn't been pitted against Link's exemplary chicken.

Ed: I couldn't agree more. Link's fried chicken was beautifully executed Southern-style fried chicken. Chang's fried chicken made by Caroline was dry and not that interesting. It was rescued by the ginger scallion sauce.

Caroline on the look and feel of the books: The copy of Momofuku that I received was a galley, but as far as I'm concerned, the book looked great. It had a very clean and modern design that was reminiscent of Chang's restaurants. The food photos didn't look too great in black and white, but the pictures of the restaurant kitchens in action perfectly captured the frenetic feeling of working a service in a busy kitchen. Real Cajun had a much homier feel, with plenty of photos of family get-togethers, and Louisiana scenery. The food shots are wonderful, several of them were so memorable that I bookmarked them to try later. I'm going to have to give Momofuku the advantage in this round, for its clean design, action-packed photographs, and very appealing wood grain cover.

Ed: Again, it's hard to elaborate much on Caroline's assessment, which I thought was spot on.

Caroline on actually cooking the recipes: The recipes in both books were very appealing but for totally opposite reasons. Link's recipes are very do-able, they don't require chef skills, or special shopping trips for hard-to-find ingredients. When it comes down to it Real Cajun is about regional American comfort food. These are the dishes that Link grew up with, and they don't aspire to be anything more. Momofuku is a whole other story. These are restaurant recipes that have been adapted for the home cook. There isn't a single recipe that doesn't require some sort of ingredient that will certainly not be found at the supermarket. The recipes are written concisely but at their heart they are restaurant recipes. There were many moments during the cooking process that I dearly wished that I had a prep cook. Momofuku is not a book for beginners, the recipes aren't difficult, but they are labor-intensive. If I had to pick a which book I would cook from more frequently, it would be Real Cajun, no contest.

Ed: Caroline did the cooking, so I've got nothing to say here.

Caroline on the narratives: Both books tell a story but they are very different stories. Real Cajun tells the story of Donald Link's upbringing, his family, his friends, and most importantly, where and how he grew up. Real Cajun is a home cooking book, not a restaurant book. While the book is well written it is much more about the recipes than the narrative. Momofuku could just as easily be a biography of David Chang and the evolution of his restaurant empire. All you would have to do is take out the recipes. When I received a copy of this book I stayed up until 4 a.m. reading it cover to cover. Peter Meehan did an absolutely incredible job writing this book. I've read my far share of cookbooks but this one is a true page turner. Reading about David Chang running into the bathroom and throwing up from nerves during his first visit from the Department of Health is priceless.

The advantage goes to Momofuku.

Ed: The Chang book told his story in absolutely compelling fashion. You could read it like a novel. The pleasure I derived from reading Link's book was from the recipes and Link's less dramatic but still affecting tales of his family and where he grew up. Including a recipe for the soft buttery rolls that were served in his elementary school cafeteria? Link is obviously a man who was raised on some good food. It was in its own modest way quite moving. In the end I have to give the narrative edge to Chang.

Caroline had her own scoring method:

Caroline: Oh no, a tie! I guess I am going to have to break the tie by saying that if you are looking for a usable cookbook, Real Cajun is it. The Momofuku book is a fun read and it's going to be a great coffee table book, but as far as home cooking is concerned it's not the most accessible, though I don't really think that it sets out to be.

Ed: This is an excruciatingly difficult exercise for us, food52. If you asked us to assess which is the better book, I have to give the nod to Chang. His story is compelling, full of twists and turns, and alternately bravado and self-doubt, so the narrative is the more compelling of the two. Momofuku is that rare cookbook, a page-turner. But this is a cookbook competition, and based on Caroline's notes I would have to give the edge to Link, because his book is likely to be used more often and more readily by home cooks. So if this were a horse race (or maybe I should say a pig race) it's Link by a (pig's) nose, unless of course as Caroline notes, your kitchen comes with a prep cook and your local supermarket has lots of exotic ingredients on its shelves. Next time, food52, we would appreciate an easier assignment. This one caused Caroline and me many sleepless nights, though we did have the advantage of having two great books to read when we were tossing and turning.

tarelki December 11, 2009
I've never been to any of David Chang's places but strangely enough i got into the Momofuku book after my dinner at Cochon. Go figure. Ang tonight i made Link's bacon braised beans using Chang's bacon dashi - the result is tremendous!