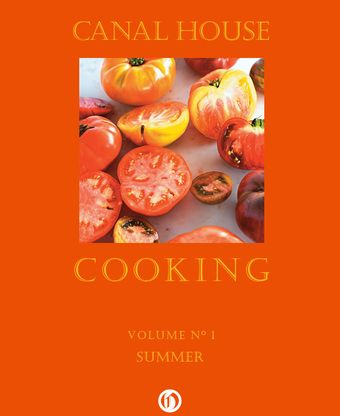 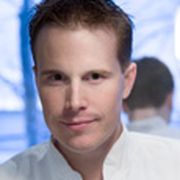 Grant Achatz grew up in the restaurant industry, his parents and grandparents being restaurateurs. Early on he realized he wanted to be a chef, and upon graduating from high school immediately enrolled at the Culinary Institute of America. Achatz graduated and ascended the culinary ladder at several prestigious restaurants, including the acclaimed French Laundry, where he became sous chef to Thomas Keller. In 2001, he accepted the Executive Chef position at the four-star Trio (Evanston, Il.). While there, he was named the 2003 “Rising Star Chef in America,” by the James Beard Foundation and one of ten "Best New Chefs in America" by Food & Wine in 2002.

Achatz realized a lifelong dream by opening Alinea in Chicago in May 2005. The restaurant received extraordinary attention from day one, and was nominated by the James Beard Foundation as the Best New Restaurant in America that same year. Alinea has garnered worldwide attention for its hypermodern, emotional approach to dining. The restaurant received four stars from both the Chicago Tribune and Chicago magazine, Achatz was named the "next great American chef" by the New York Times (September 2005), and in October, 2006 Alinea received Five Stars from the Mobil Travel Guide. Achatz has appeared on the Today Show, CBS Sunday Morning, The Food Network, The Discovery Channel and PBS.

First A Note From The Piglet Editors: Every good sporting tournament has its wildcards -- which give underdogs a chance and ensure that an emergent champion has truly been put through its paces. The competition for the coveted Piglet is no different. In this, our zombie round, we raise deserving nominees from the dead and give them a second chance at victory.

I rarely cook at home. Even when Alinea is closed on Monday and Tuesdays I find myself back at work, cooking dinner with my girlfriend and two young sons. They are six and eight, and while they have amazingly adventurous palates for their age, the meals often consist of various pastas, homemade pizza, and ice cream frozen with liquid nitrogen. That being said, how do I find the time to try a few recipes out of the tournament books in an effort to choose a winner?

A good cook always knows his strengths, drawing from the resources that are available to him in order to get through the hectic days. As it turns out I happen to have a brigade of 24 chefs at my disposal. All of a sudden the recipe testing got much easier.

I decided the best way to dig into the books was to have the team of chefs at Alinea, including myself, test various recipes for our daily staff meal. The dishes were scaled up accordingly to feed the staff of 55 people. It was incredibly fun (and delicious) as the entire staff would chat about the food, while paging through the books during their 30 minutes of free time in the middle of the 14 hour days.

In the first volume of Canal House Cooking, Christopher Hirsheimer and Melissa Hamilton write that they have compiled a collection of summer-focused recipes of “home cooking by home cooks for home cooks.” But don’t let them fool you, the recipes are deceptively sophisticated. With its modest tone and relaxed methods (“Add more water if you need to as the chicken and vegetables should be covered”) it is, at first glance, a book of straightforward recipes. However, as you look more closely, they are easy to follow as a result of being stripped bare of unnecessary fluff while leaving room for interpretation and instinct. What remains are intelligent techniques, compelling flavor profiles, and an extremely versatile repertoire of dishes. Most people would consider a dish of poached chicken, served cold in its own gelee, to be too advanced for the average home cook. But the authors manage to make the recipe approachable with some common sense modifications: rather than forming the components in a terrine mold and slicing the finished dish, they suggest assembling the dish in a shallow bowl and simply spooning out the gelee.

And honestly, how can you not like a summer-themed book that devotes an entire chapter to tomatoes? Everyone over-plants the garden with tomatoes each year, and you can only eat so many BLTs.

To compose our staff meal, the cooks chose the hot version of the Potato Leek Soup, the Swiss Chard Flan, the Pork Loin Cooked in Milk, and the Plum Tart. While all the dishes were great, we struggled with the Pork Loin Cooked in Milk. The sauce is derived from the milk in which the pork is cooked. In our version, the sauce did not thicken from reducing it as the recipe outlined -- the result was too thin to coat the meat in any way. Frankly, this was probably due to the multiplication of amounts required when feeding 55 people; the original recipe served 4. (We overlooked this and just added a touch of roux to adjust the viscosity.)

Real Cajun is like an autobiography of Donald Link, the owner of Cochon and Herbsaint in New Orleans, told through food that focuses on the Acadiana region of Louisiana. Even the subtitle of the book hints at this: Rustic Home Cooking From Donald Link’s Louisiana. Using photography that conveys the personality of the region, written reflections on his childhood memories, and of course the recipes, Link (who wrote the book with Paula Disbrowe) depicts a life in the south that you'll feel connected to by reading and, especially, cooking from the book. He credits his Cajun cultural and culinary heritage as the reason for his professional success.

In a recipe for shrimp stock, he writes, "Nothing is wasted in the Cajun kitchen, which means that everything from vegetable scraps to seafood shells is put to good use..." -- a statement that, like many others in the book, ties together his upbringing and his work as a chef. While he learned to make shrimp stock at home as a rustic exercise in frugality, he later came across it as a classical preparation practiced by chefs.

My team prepared a feast from Real Cajun: Chicken and Dumplings, Creamed Corn, Cast-Iron Hush Puppies, and Chocolate Bread Pudding with Bourbon sauce. Maybe not the best meal to energize a staff before a busy service, but we inhaled the rich courses in a matter of minutes; soon thereafter the inevitable lethargy set in. One of my staff joked: “In that bread pudding recipe, does it mention in the method to allow for a 2-hour nap after consuming?”

I was presented two great and totally different books. Both effectively capture the personalities of the authors, while presenting recipes that people will genuinely enjoy reproducing at home. The straw for me was the fact that Canal House Cooking was an ongoing project, the first of three volumes they'll publish each year. Assuming Hirsheimer and Hamilton continue to produce the vision that volume 1 has established, I think this will make all of the books a fantastic resource for home cooks.

Canal House Cooking gets the nod, but after reading Real Cajun, I need to get to Chef Link’s restaurants in New Orleans as soon as possible.

The Piglet Comes to Alinea

To help him make his decision, Grant Achatz brought a bit of the Piglet to his Chicago restaurant, Alinea. He tested dishes from Canal House Cooking and Real Cajun with his staff and served the results for family meal. He photographed the results, which you can see below. 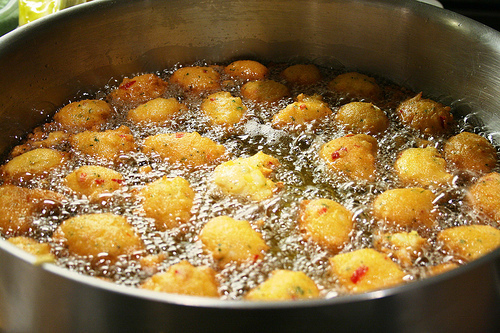 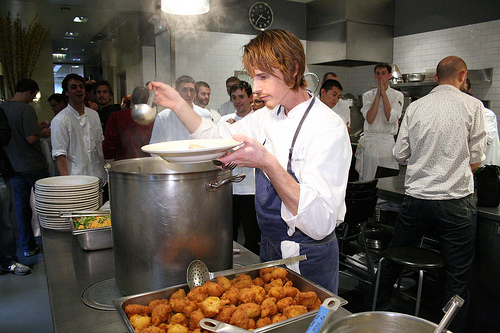 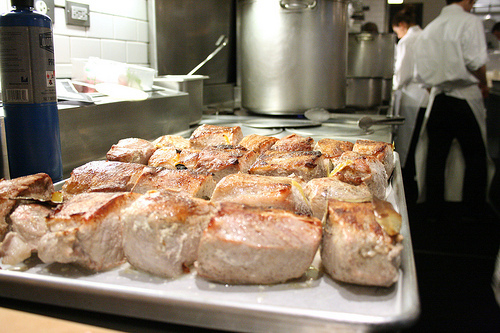 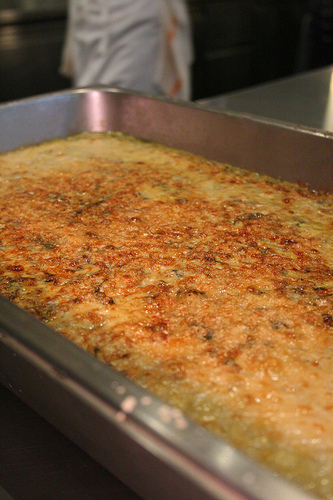 A big pan of Swiss Chard Flan from Canal House. 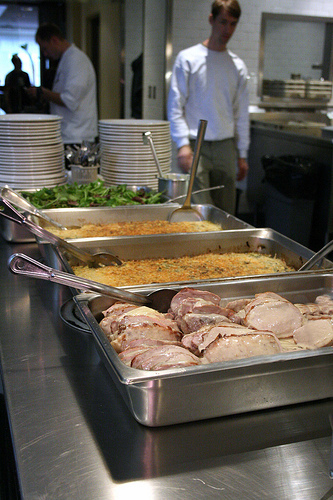 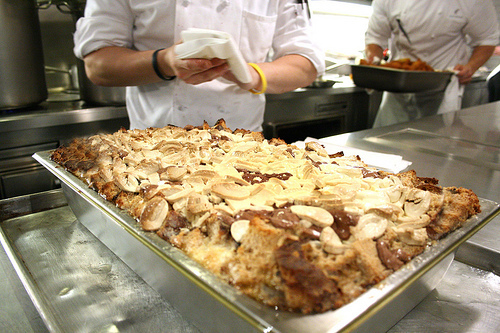 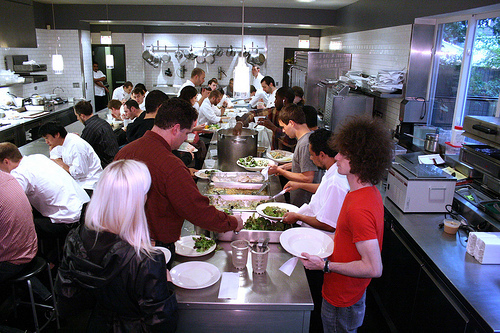 JoeU November 9, 2009
This book looks beautiful but it's kinda simple apart from the whole series. Does this mean that Nora Ephron is going to judge the same 2 books as Gail Simmons?

Michael H. November 9, 2009
As I enjoy a lamb shank from to soon to be released volume 3, I vote for Canal House Cooking

christopher H. November 9, 2009
While I recognize that Seven Fires is a wonderful book I vote for Canal House Cooking!

GRW144 November 9, 2009
I'm amazed at the quality and layout of Canal House... the only thing missing is the Scratch-n-Sniff card to smell the food! GREAT JOB!

whitneypk November 8, 2009
Canal House is absolutely the winner for the Piglet!

janeswesby November 7, 2009
Christopher and Melissa have created a beautiful and authentic series of books that one devours with the eyes first and then the tastebuds.

cookin November 7, 2009
The book is gorgeous, the photos superb and the recipes are delicious.

fisher November 6, 2009
Canal House Cooking is awesome, and exactly what I expected from the real pros. The photography was beautiful. Thanks for this piece of art.

picopico November 6, 2009
My vote goes to Canal House Cooking. The mushroom ragu with polenta is amazing!!

gjackson November 6, 2009
I met Christoper at the Lexington Humane Society event this year. She shared with audience her new cook book, Canal House Cooking Volume 1. Everyone in attendance loved her and her work. I vote for Canal House Cooking!

Jon C. November 6, 2009
I live next door to Christopher and have had most everything in her and Melissa's new cookbook. Every dish is delicious. Not being a real cook, the recipes don't intimidate me. Delicious!

Dale F. November 6, 2009
Canal House Cooking is one of my favorite new recipe books. Beautiful (layout, photography, and art work), inviting, not overwhelming, encouraging. Every year I pick one thing to give everyone on my Christmas list. Canal House Cooking Volume 1 & 2 is my choice for Christmas 2009.