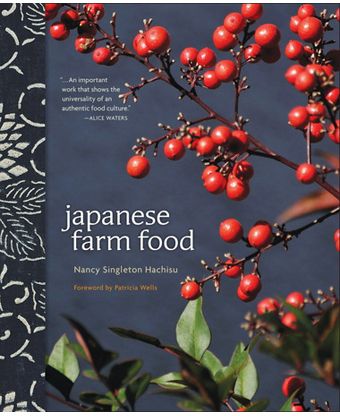 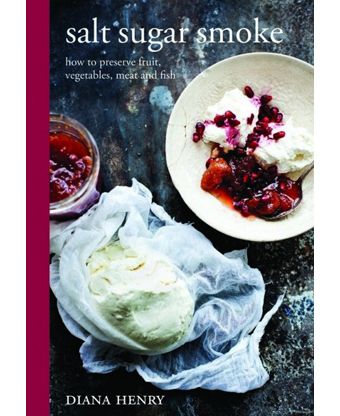 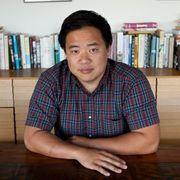 Chris Ying is the editor-in-chief of Lucky Peach, a quarterly food magazine he midwifed into being with Dave Chang and Peter Meehan in 2011. He's currently writing the Mission Chinese Food Cookbook with Danny Bowien, and working on a cookbook with Ivan Orkin of Ivan Ramen. His company, Ying Horowitz & Quinn, experiments with new digital media projects like their new iOS app, The Silent History.

Food writing—cookbooks in particular—is about fantasy. It might masquerade as instructional, but it’s not. Like any other fantasy writing, cookbooks are about describing (or fabricating) a universe, and inhabiting it with idealized versions of ourselves. Sometimes the fantasies are grounded in a reality much like our own. Sometimes they meander dreamily into the realm of science fiction.

That’s not to say I don’t love food writing, or cookbooks. I’m a daydreamer. I spend most of my idle hours imagining how cool it would be—how cool I would be—if I cured my own bacon, made my own wine, ate more fish, opened a restaurant, pickled vegetables, learned Portuguese, or lived on a Japanese farm. Cookbooks indulge our fantasies by providing step-by-step directions to achieving the lives we think we want. You too can have your very own subtropical pig ranch or bottle your own medieval mead—all you have to do is follow the instructions! Of course, if we really bought cookbooks for the instructions, we’d all be working on co-op farms in Berkeley. Better to live vicariously, I think.

Most cookbooks are centered around people who have fantasized about similar fantasies to our own, but who have actually gone through the trouble of following through with them. The two cookbooks that the Piglet delivered to my doorstep were each written by a bold, ambitious woman who decided one day that she would live her life in a more primitive way.

Diana Henry’s Salt Sugar Smoke focuses on that most admirable and vital of skills: preservation. She grew up a pickler and a jammer and a potter of meats; a few years ago, she decided to hone those skills and then share them with the fresh-food inclined. Hers would be the house I’d flock to after the apocalypse. Without, gas, power, or running water, I imagine we could still have a good time sitting at her kitchen table, popping open glass jars filled with all manner of sweet, sour, salty goodies, ready to be eaten on the spot or dolloped onto foraged scraps of burnt flesh that the marauding packs of feral hamsters have left behind.

My Japanese friends assure me that the author of the second cookbook has no less than a cult following in Japan. After marrying a Japanese farmer by the name of Tadaaki, Nancy Singleton Hachisu relocated to her husband’s farm in rural Saitama Prefecture. There, they’ve lived for more than two decades, eating what the farm yields, hosting numerous visitors, honoring and reviving farm traditions, and cooking simple Japanese food.

Both books represent fantasies that I’ve had. Not marrying a Japanese farmer, per se, but living on a farm, eating simple food, leaving America for a far-off locale. Or becoming better about making my food last, and not relying on the supermarket for my bacon and jam.

As instructed, I cooked a meal from both books. I won’t trouble you with too many details. Except to say this: I chose a recipe for sweet tea–cured chicken from Salt Sugar Smoke, because I thought sweet tea–cured chicken sounded like something a British writer would concoct to mock the good old U.S. of A. (It didn’t help that she suggested serving it with a “big green salad with ranch dressing.”) I was all ready to lead off my judgment with, “Are you having a laugh, Diana Henry?”

But then that ambassador of all things good, old, and Southern, Sean Brock told me that he brines his fried chicken in sweet tea before serving it at Husk. Plus, I made Henry’s version and it was delicious. International incident averted.

The fact is, both meals were great. The recipes worked without a hitch. But I don’t really feel like it’s fair to judge cookbooks based on meals I cooked from them. What if I were a shitty cook? (I’m not.) What if I chose the recipes out of spite? (I did.) Like I said, cookbooks are about the fantasies they inspire and cultivate, not just the accuracy and utility of their instructions.

Such as it is, I have to make my choice between these two books on my own personal delusions. Again, both lifestyles appeal to me. My inner Bilbo Baggins tingles and squirms at the thought of being able to offer an unexpected guest a jar of potted salmon and a glass of homemade rhubarb schnapps. After returning from a trip to Japan this summer, I wanted desperately to eat more Japanese food, to be able to recreate the deceptively straightforward but unbelievably tasty things I’d eaten. And when it comes down to it, my mind wanders more frequently to dishes like katsudon, grilled yellowtail collar, tempura, and sake-steamed vegetables with miso.

That’s just me. It’s a bit unfair, obviously. If I’d been asked to judge Salt Sugar Smoke against another book about preservation, I’m sure Diana Henry would’ve trampled all over it.

But when I close my eyes to escape whatever it is I’m doing for just a moment, more often than not I find myself thinking, Damn, I wish I were in Japan right now.

luvcookbooks February 24, 2013
Thoughtful and resonates with my own reasons for reading cookbooks. Want both of them. :))

MsMora February 18, 2013
Great job, Chris. Loved your approach, but then I also love the style of Lucky Peach. Japanese Farm Food is definitely my favorite. It is approachable, it is well written, the recipes are delicious (don't miss the sake-steamed clams or the natto fried rice - a breakfast staple in our house, but best of all they are real. Nancy writes beautifully about a life that I would line up for in a heartbeat. JFF is my go-to cookbook for connecting with a culture and cuisine that I adore.

Michelle D. February 16, 2013
I have both of these books and they are both fantastic. I'm enjoying all of these reviews - and the competition itself, which alerted me to a number of new cookbooks (resulting in me owning these two) that we have not seen on the shelves here in Australia as yet. Great job!

Nancy S. February 16, 2013
As the author, would love to know what Chris cooked "naked, sobbing, alone in the privacy of [his] own home." But then I've got to go along with the tamago kake gohan as the absolute essential dish I crave. Katsudon is also the heart of our food. I love that you got that, Chris. And I love this completely personal and quirky book review forum. Great!

healthierkitchen February 22, 2013
Nancy - your book is sold out everywhere! Do you know when it will be available again?

Nancy S. February 24, 2013
Hi Healthierkitchen. Sorry I responded to this and it got lost in the shuffle. Will try again. As far as I know the 2nd reprinting should have arrived around Feb 18 so should be on the bookshop shelves and Amazon this week. Also IndieBound is a good place to check local bookshops. Thanks!

Sauertea February 15, 2013
Well it appears based on the review, that I need to by both. Stellar writing by the way.

Kenzi W. February 15, 2013
An approving nod to all of you who celebrate this review for its lyrical departure from standardized form. For those of you who are hung up on what, precisely, he cooked, Chris Ying is coming to you with an update:

"FYI, I made katsudon and sake-steamed squash. On a separate occasion, I also made tamago kake gohan. But what I cook naked, sobbing, alone in the privacy of my own home is my own business. "

hardlikearmour February 15, 2013
Chris Ying's comment made me laugh so hard I got tears in my eyes! Thanks for that.

LLStone February 15, 2013
Best review and follow-up yet! It makes me want both books, although I lean more toward Bilbo Baggins. :)

lisabu February 15, 2013
Editor! Please. What did he cook from Japanese Farm Food?

nightkitchen February 15, 2013
How right you are about cookbooks having a totally aspirational bent to them (and then I get mad at the book for promises unkept). And what a pleasurable essay/review to read overall. I did out of curiosity want to know what was cooked from Japanese Farm Food, and the details of that. Perhaps it was the yellowtail collar et al.

hardlikearmour February 15, 2013
I love how differently the reviewers approach the somewhat impossible task of comparing 2 wildly different books to each other. It's inherently not fair, because we all have different palates, skills, and preferences. I love how Mr. Ying essentially stated what it is about cookbooks that he loves. He chose based on what cookbooks evoke for him, without apology, while still being respectful to both authors. Another fun day of Piglet!

krissi February 15, 2013
I love Chris Ying, his romantic descriptions of the two books makes want to buy both!

savorthis February 15, 2013
Both books have lured me from the start, but being a freak for Japanese food and one who frequents Domo, Denver's fabulous Japanese country style restaurant, I'd probably make the same choice.

Isabelle J. February 15, 2013
I'm not inclined to try cooking either of these types of food, so the stakes here are low for me, thankfully, because I really enjoyed yesterday's style of review much more. However, I love that so many of us are finding something we like, because the reviews are so varied.

Greenstuff February 15, 2013
The opposite of yesterday's, "who cares about the fantasy, give me an organized list" review. Yet another reminder that it's all fun.

mrslarkin February 15, 2013
Can't wait to get my hands on Salt, Sugar, Smoke for my post-apocalyptic larder. Curious what recipe Chris Ying made from Japanese Farm Food. Am I missing it?

Naomi M. February 15, 2013
I love this witty review! Highly entertaining, as is Lucky Peach (I got my Apocalypse issue yesterday)! I do wish we had heard what was cooked out of the winning book. My fantasies center more on being able to eat wonderful food from anywhere in the world in my little town outside of Austin that only had a Dairy Queen the first few years we lived here. I too love the Japanese Farm food cookbook, and had not heard of Salt, Sugar, and Smoke, but now have it on my list since my bucket list has a desire to do more home preserving.

ericarw February 15, 2013
I think Ying makes a good point in asking 'which book am I more likely to want to cook from?'. Also loved his description of cookbooks as fantasies - too true!