Today: A smooth, chocolatey milkshake, with frozen bananas and almond milk standing in for dairy. Stop what you're doing, and make one now. 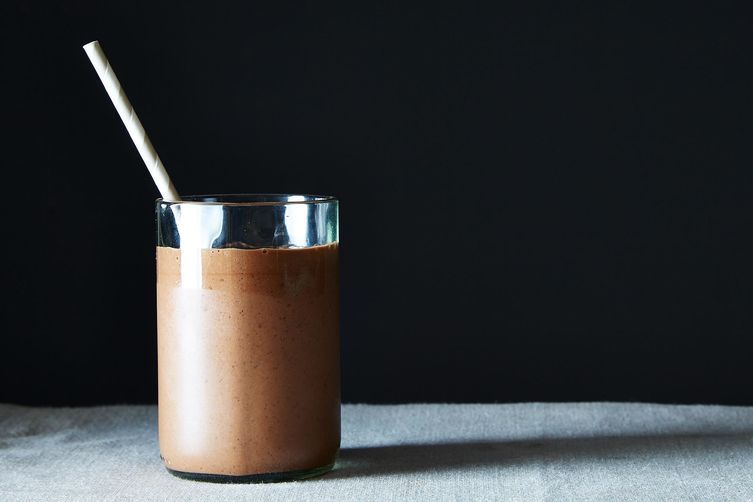 This milkshake recipe is so intuitive and familiar to me that I tend to take for granted how absolutely delicious it is. I've made banana and almond butter shakes, often with the vital addition of cocoa powder, dozens of times.

So when I whipped up this chocolate "milkshake" (there's no regular milk involved, but see if it doesn't taste like one of the richest, creamiest shakes you’ve ever had) last week, I wasn't expecting to have the reaction I did; I was amazed at how a mixture of such simple things (bananas, almond milk, cocoa, dates) could taste so good. I took my first sip, sat down at my dining room table, and stopped everything so that I could savor the entire glass. I suppose it's never too late to rekindle your love affair with an old standby.

More: Make your almond butter from scratch -- here's how.

This shake will benefit tremendously from bananas that have had time to get nice and ripe before you peel, chop, and freeze them; the riper they are before freezing, the creamier and sweeter your shake will be. If you don't have almond butter, cashew and coconut butter are great substitutes, and soy or hemp will also do nicely for the milk base (just don't use rice milk here -- it's not quite creamy enough). Peanut butter works well in the recipe, too, though its flavor is so strong that the taste profile will shift immediately from "chocolate milkshake" to "chocolate peanut butter milkshake" -- which may not be such a bad thing, after all.

Gena's new book Choosing Raw: Making Raw Foods Part of the Way You Eat is a thorough, relatable guide to incorporating raw and vegan foods into any diet. It's full of no-fuss recipes for every meal, which range from fully raw to mostly cooked, with plenty of snacks and desserts to keep everyone happy.

Denise January 16, 2016
Just made a 1/2 order. No dates, so I used your "touch of maple syrup" suggestion. No almond butter, so I used peanut. Nut milk was homemade cashew-macadamia. Hubba hubba. So good! And I'm drinking it with a straw. ;)

Amy August 13, 2015
I made this yesterday and the taste was great but I had trouble with the dates staying in little chunks and not blending properly...any tips or tricks to get them blended into the same smooth consistency as the rest of the milkshake?

Lyana S. August 9, 2015
For people who are not a fan of banana, can try substitute with egg free tofu & add vanilla essence to add some oomph to the taste.

Caitlin N. August 11, 2014
Delicious! Please try swapping the almond butter for a teaspoon of tahini! It's a nice option and high in calcium!

Cococi August 7, 2014
I'll have to try this one. I am lactose intolerant but I adore milkshakes so this seems like a great idea. I made a diary free milkshake with cashew milk on my blog a few months that is a great option too.
Author Comment

Joy B. August 7, 2014
I make this all the time. Sometimes with a tiny splash of vanilla extract, if I'm feeling fancy. It's SO GOOD.
Author Comment

Angie August 7, 2014
I wonder if the taste of it would be vastly different or worse if I used coconut butter instead.
Author Comment

HFog August 7, 2014
IMO it's way too sweet with the dates. You don't need them. the bananas provide enough sweetness

Kristen M. August 7, 2014
I loved the dates -- I didn't identify them at first taste, but once I realized they were in there, I credited them (plus the almond butter) with making this more nuanced than my average black & white shake.
Author Comment

Gena H. August 8, 2014
Beth, you can also use a touch of maple syrup. To taste. The dates definitely enrich this -- they give it a caramel-like flavor that's perfect for a milkshake -- but it's sweet on its own.

Sarah J. August 7, 2014
Ever since I tried this milkshake, I've been coveting a blender -- and that's a true story.
Author Comment

Annaliese August 7, 2014
Wow! I have been noticing a lot of this type of shake/smoothie in the past few days on many food blogs. These are wonderful, and are also a great post-workout treat! What a great version :)