Too Many Cooks: Your "Colorful" Family Recipes

You'll be hearing from the staff at FOOD52 in Too Many Cooks, our group column in which we pool our answers to questions about food, cooking, life, and more. 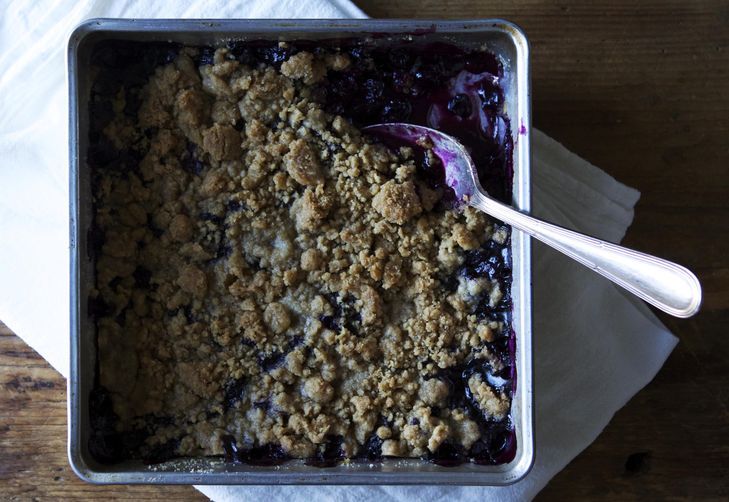 Though it can be argued that family recipes make for some of the fondest memories, certain recipes (or recipe names) might be best left in the past. A family recipe for a one-bowl chocolate cake is one thing, but trying to explain what a schlumpf is can be difficult (even if this dessert is delicious). And some family recipes are what one could call interesting at best -- like that fruit-dotted mound of jello your aunt brings to Thanksgiving every year. We had the Food52 staffers gently pick on their families and reveal:

What strange, interesting, funny, and/or endearing recipes come from your family?

Did a mayonnaise-heavy meal turn you away from the stuff forever, or did you have a family snack that your friends never understood? Tell us in the comments! 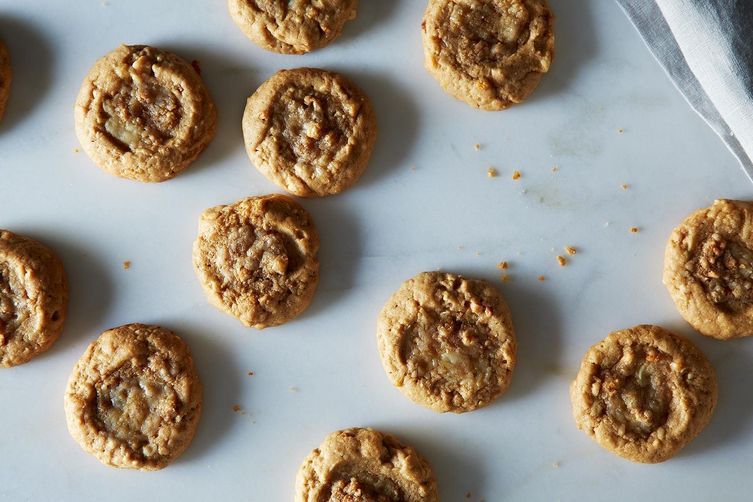 Stephanie: My nana made a tuna salad with lettuce, potato chips, and mayo. It was more lettuce than anything else, and it's still tasty to those of us who grew up thinking that was a normal tuna salad. My mom used to make these almond cookies that we originally called "drops," until we started calling them "scats," as in scatology. We're weird. 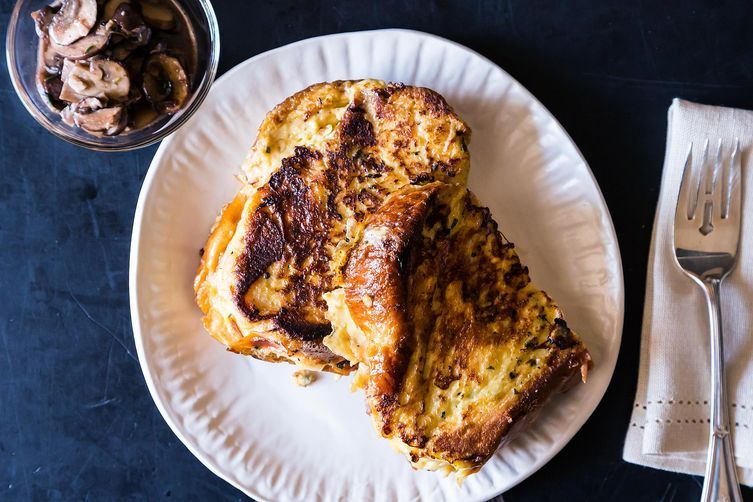 Hillary: My grandfather once ran out of milk when he was on vacation on an isolated island. There was a lot of orange soda around (think Fanta or Crush), so he mixed it with eggs, then dipped in white bread to make french toast. The sugar actually makes the bread brown very well.

Erin: My mother baked bread fresh everyday and made everything from scratch, but even so, one snack still gives me chills to this day. When I would come home from school, my mom would make me "Turkey Roll Ups" -- a slice of turkey slathered with mayonnaise and rolled into a log. As an adult, I don't really like mayonnaise, so it freaks me out. 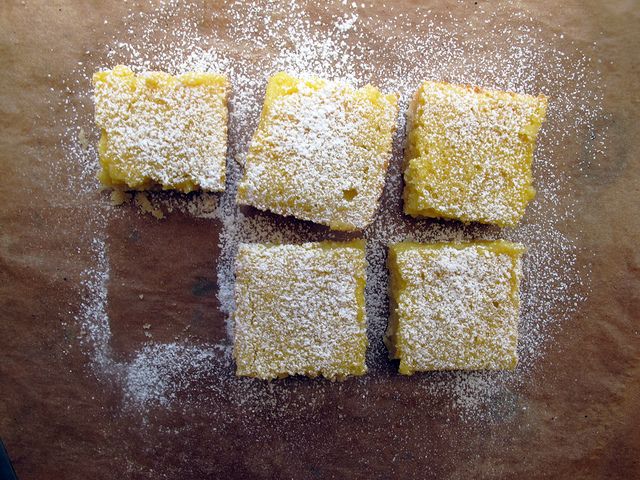 Haley: My family employs the phrase "Lemon Bars" to mean punishment of some sort. "You didn't clean your room? Lemon bars for you." "You forgot to take out the trash? More lemon bars." The only person who doesn't know about the phrase is my grandmother, who makes the legendary lemon bars. Hers tasted something like dog food and have the consistency of baby food. Here's to hoping Grandma never finds out...

More: If you're interested in better lemon bars, you've come to the right place.

Jackie: My grandpa used to make chocolate sandwiches. My grandma didn't really permit sweets (as in, she did NOT permit sweets) and so when she went out, my grandpa would make chocolate sandwiches for my dad and his brother. Literally just a chocolate bar sandwiched between challah or other bread. I guess it was the closest he could get to an Austrian Konditorei on Long Island. Not sure if Grandma ever knew about them. 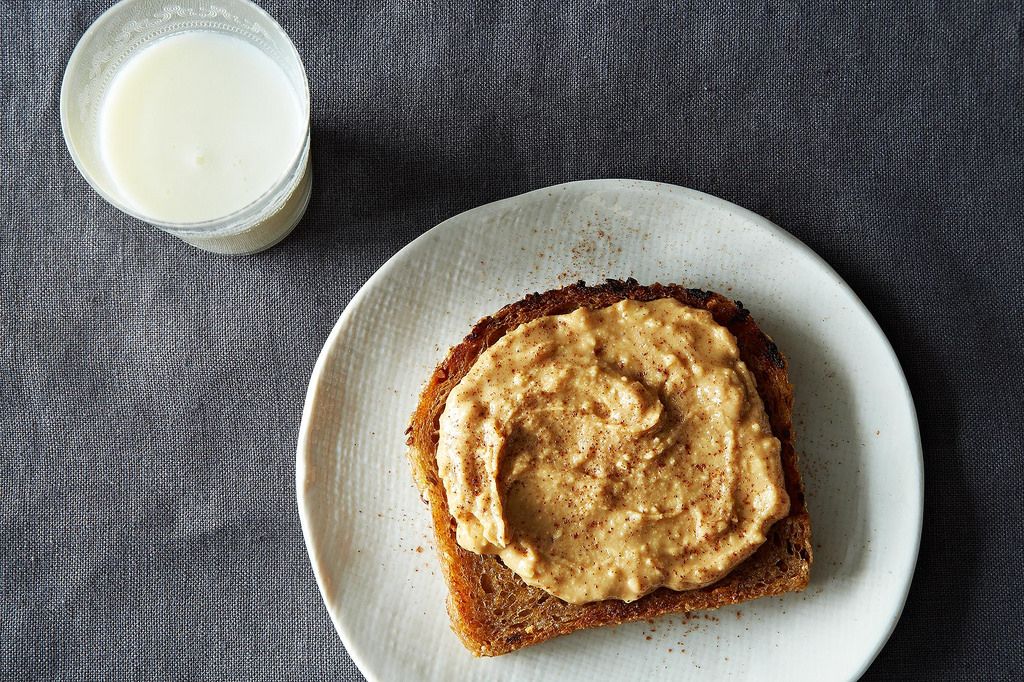 More: Stir up some homemade peanut butter for your sandwich.

Catherine: My two grandparents had very different interpretations of weekend breakfast food, each of which I love in its own way. My father's mother, Nana, would make us toasted Eggo waffles with literally a tablespoon of salted butter on each, and then she'd drench it in fake maple syrup. My mother's parents would make us the crêpe-like pancakes, which my grandfather would drizzle in random shapes on the griddle. We would argue over what the shape of the pancake was (an alien, a bear attacking a porcupine, etc.), and then we would devour them with peaches and powdered sugar. Those were the days. 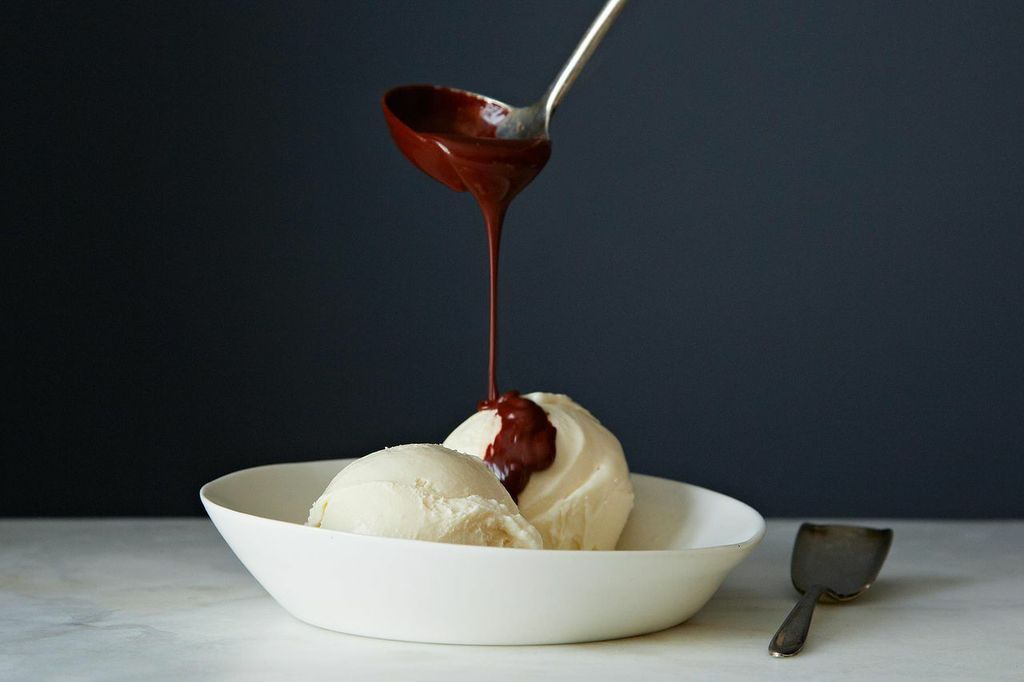 Marian: My grandmother makes something called "specky," which is a chocolate sauce peppered by little specks of more chocolate. I think it's mostly corn syrup and chocolate melted together, and that it was once a mistake, but then her children began to ask for it by name, and so "specky" was born. Growing up, we'd eat it warm, poured over vanilla ice cream, and it would quickly melt into slick pools of chocolate-swirled cream. With specks.

Kristin: My mom made "snails" -- pieces of bread dipped in melted butter, then spread with cream cheese and cinnamon. She'd roll them up and slice them like sushi, then bake them in the oven. The cream cheese would melt with the butter, and the bread would get slightly toasted. Probably not the healthiest choice, but so yummy. 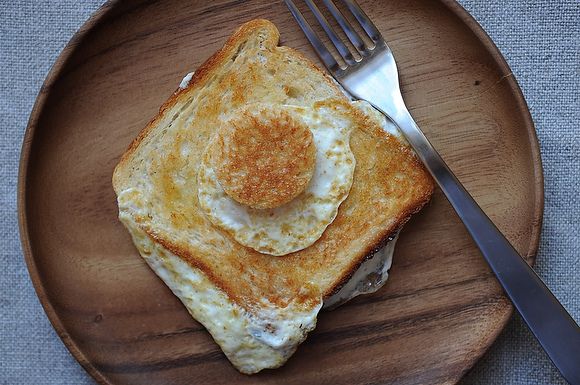 Merrill: My grandfather was famous for his one-eyed sandwiches. My grandmother loved anything with lots of butter and/or cream. One of her specialties was fried bread -- Pepperidge Farm white bread, pan-fried until golden and crisp in a shallow pool of butter. She was also obsessed with aspic, and passed this fixation down to my mother; I'm happy to report that it ended there.

More: Learn how to make the perfect one-eyed sandwich.

Amanda: Not sure if this counts, but my aunt used to make what she called Mock Lobster, which was meatloaf that she shaped like a lobster.

What strange, interesting, funny, and/or endearing recipes come from your family? Tell us in the comments!

AntoniaJames August 18, 2014
I cannot think of a single childhood dish or food item that one could describe as strange or funny. My mother's quirks in the kitchen were linguistic. She had two marvelous expressions that I've never seen or heard anywhere else. Odd bits of things she'd refer to as "orts and nubbins." Her generic term for pantry dinners -- and hers were always delicious -- was "roots and cheese." (They invariably included one or both of those, of course.) I love those expressions so much, I've used them as titles for Food52 collections. ;o)

Lauren Y. August 17, 2014
My Mom and Grammy always made "Garbage Salad" growing up. It's the most amazing salad you'll ever eat. It's a secret recipe though so they are the only two that know the recipe! I wasn't allowed to have the recipe until I got married last year! Hahaha.

Sophia H. August 17, 2014
I used to make cheese sandwiches with the cheese dipped in powdered sugar. I still love the sweet salty thing and make grilled cheese with jam in it or drizzled with honey before dipping in ketchup. Guilty pleasure. Also my grandfather would get saltines, cream cheese and cherry pie filling and we would eat it as a snack.

OnionThief August 17, 2014
My mother made us jelly and cheese sandwiches. They were her homemade bread which soaked up giant spoonfuls of strawberry freezer jam, and thin slices of Monterrey Jack cheese.

savorthis August 17, 2014
My uncle made something called cracker eggs. A French toast preparation using saltines that could go sweet or savory. Lay the crackers flat in a pan and pour over an egg and cream mixture. Cook until browned then flip. Top with raspberry jam. Oddly delicious and almost always on hand.

SapphireIce December 10, 2014
I don't know if you get notified of replies to comments here, but I'm also interested in this "dish"! lol Do you have a ratio of how many saltines to eggs? And how much cream? I'd appreciate it if you'd share. :) And I promise to let you know how the family liked this.

Suzanne H. August 16, 2014
My mother used to make kidney stew, which as a child I used to like. She would boil the kidneys to "get the pee out" and then cook them with the usual stew vegetables in a pressure cooker. I would not eat that now!

Shana L. August 16, 2014
We used to have a "salad" that was a leaf or two of iceberg lettuce, with halved cling peaches (tinned/canned in fruit juice), topped with a dollop of Miracle Whip and sprinkled with American cheese. I still think fresh peaches mixed with a bit of Miracle Whip are delicious!

Hilarybee August 16, 2014
My father loves bran and is infamous for his use in bran cereal in many recipes, including as a binder in meatloaf and worse, his bran muffins. His official entry into the family cookbook is "Orange Bran" muffins, which are hard as rocks and contain more raisins than most would be comfortable consuming in a single sitting. Sorry, Dad--it's the truth!

Count M. August 16, 2014
My dad and I used to enjoy what we called "slime toast" for breakfast -- toasted bread with ample butter, then peanut butter. They melted together and got kind of slick.

He will put darn near anything between bread and call it a sandwich. I still give him hell about the time in 4th grade I went to school with a peanut butter, salami, mayonnaise and aerosol cheese sandwich.

Komal August 16, 2014
My auntie used to make loads of tasty sweet treats.
Her pancakes were thick and sweet, fried in loads of butter and the crispy edges were to die for. I could eat 5 in one sitting!
She also made "crunchy" which was basically a tiffin made with galaxy chocolate, maltesers, biscuits, dates and other deliciousness.
Oh and lastly there was mango pudding which she made by mixing tinned mango puree with condensed milk and orange jelly. Sounds odd but was very tasty

meet Y. August 16, 2014
Growing up my family made a big batch of deliciously sweet apple sauce every September and froze it to be used for the entire year. It was a necessary condiment on numerous occasions: sloppy joes, lasagna, tacos, homemade mac n cheese, meatloaf... I now do the same thing in my own kitchen! Sloppy joes just aren't the same without it!

gmg2011 August 15, 2014
In my French Canadian family "creme" is legendary--essentially raw eggs whipped into a froth with lots of sugar. Creme is meant to be served at breakfast as an accompaniment for toast, but tastes a lot like tiramisu.

klrcon August 17, 2014
In my Italian family we call that "sugar egg" and it's one of my fondest childhood memories - it was delicious. And I've never met anyone else who did that! You've given me a smile for the day.

gmg2011 August 17, 2014
So glad! I was just thinking we would have to make it for my children the next time my mother is visiting.

Marion G. August 17, 2014
My mom did that, too, sometimes just with the yolk if she had leftovers when baking. We are German, so perhaps its a European thing. Also miss "egg liqueur" on ice cream

MaSaBeMama August 15, 2014
Merrill I met you in Chicago while you were pregnant - any chance aspic will be a "thing" when your daughter matures?

creamtea August 15, 2014
My mother used to make ice cream sundaes with pretzels stuck in them. Sooo good. I love ice cream with pretzels to this day. I think that she invented the salt+sweet craze. My daughter invented Tillamook Cheddar and Nutella sandwiches when she was little. She still makes them now that she's a young adult. I never did try them.