Too Many Cooks: Your First Job in Food 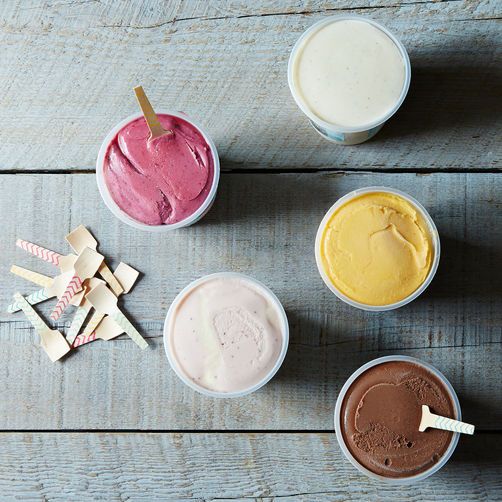 First jobs are always exciting and often distressing, especially when they’re food-related. There are plenty of embarrassing tales -- tales of hysterical customers and riots at brunch-time -- but there are also the great stories of restaurant owners who looked after their waitstaff and of lifelong friends made on the job.

Whether your first job was behind the counter at your local clam shack, serving drinks in a trendy bar, or seating guests at a Michelin-starred restaurant, you probably have an anectdote worth sharing. In fact, when we asked the staff members at Food52 about their first restaurant jobs, we were so inundated by answers that we decided to split our usual post in two: front of house and back of house. So today, the answers to:

What was your first job in food in the front of the house?

Did you spend the summer working at your uncle’s catering company or “bread and water-ing” at your local fine dining establishment? Tell us in the comments!

Kenzi: My hometown had 5000 people in it, and as such, the choices for 16-year-old employment boiled down to working at Third Wave specialty coffee shop Dunkin Donuts, or at some new "organic farm"-type restaurant opening down the road. (Remember guys, this was before calling something "farm-to-table" was taboo.) I took my chances, and for some reason, was hired at the latter as part of the waitstaff.

On my first day, I remember going through the menu with the very intimidating chef and co-owner, Kara. My first question: "What is a haricoT verT?" For some reason they let me stick around, and I spent the next five years working there, year-round: They were brave enough to let me work in the kitchen for a year of this time; they were absent-minded enough to let me serve wine to guests as a 16-year-old (and even more so to let me taste through wine with reps, alone, when I was 17). They gave me my first cookbook (The French Laundry Cookbook), took me to my first NYC restaurant (Jean-Georges), and also took me to tour FCI when that's what I thought I wanted to do. I owe a lot to these people. 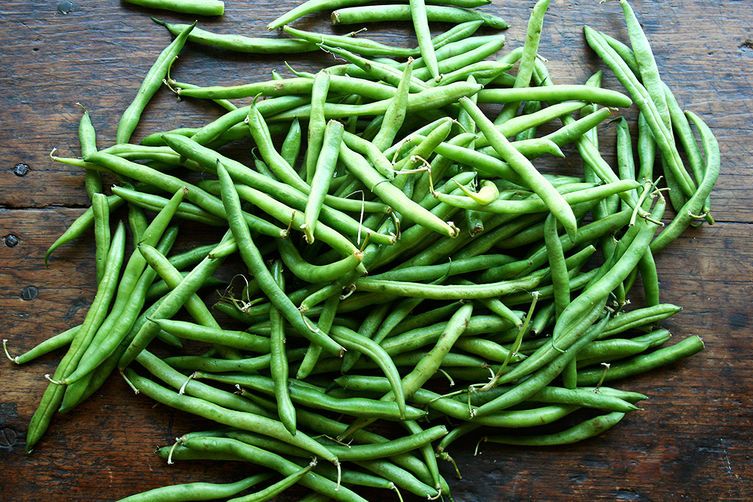 Merrill: My first food gig was at the age of 18 when I worked as a server at a weird little restaurant run by a French couple in a tiny town in Maine. The highlight of my time working there was the night the bartender (a harmless if also somewhat sketchy 40-something bachelor) presented me with my first ever Long Island Iced Tea at the end of a shift. It sounded pretty harmless and tasted delicious, so I indulged him and drank it down in record time.

The evening ended with one of the busboys (who was a couple years younger than I was) having to drive me home in my parents' car, which I used to get to and from work. And then my parents had to drive him home. 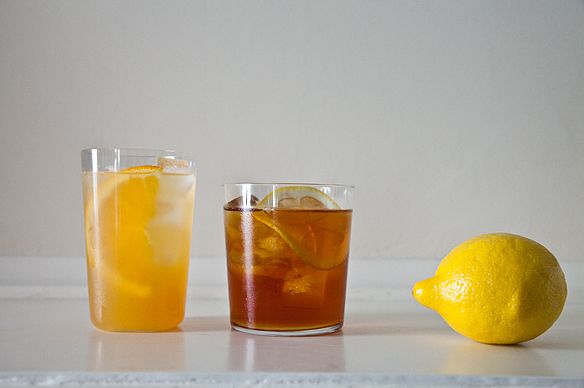 Lauren: I worked at a coffee chain that thought it could compete with Starbucks (it couldn't) and made some friends I still see regularly. Favorite memories, many of which happened during extremely slow afternoons:

More: Bread pudding is a lesss dangerous way to use up old bread.

Kristin: I worked answering the phone at a Papa John's the summer between my junior and senior year of high school and I had some...interesting customers. One guy called and asked for the three-topping pizza special, and the three toppings he wanted were bacon, bacon, and bacon. (He thought that was hilarious.) This was on a very busy Friday night. Our computer system didn't allow for three of the same topping, so I spent quite a while trying to figure it out. He called back about 10 minutes later wanting to alter his order to add another topping -- more bacon. 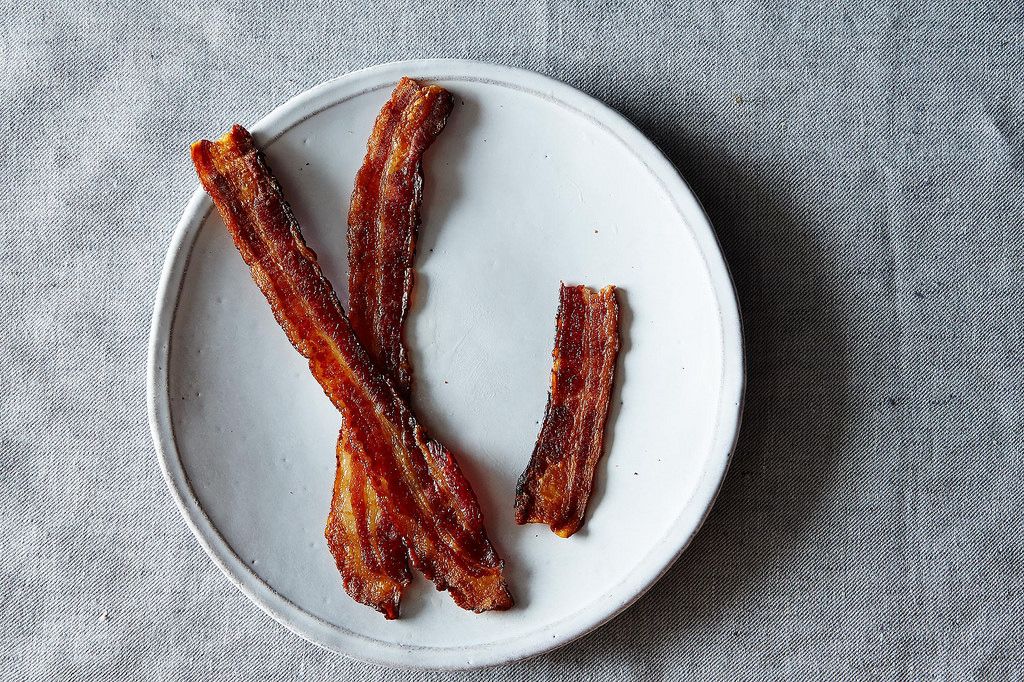 Allison: The summer before college, I worked at a brand new boutique grocery store/sandwich shop in my hometown. It was just me, another classmate, and the owner. Since my friend and I didn't know much of anything food service-wise, and we were still too young to operate the slicer, we were probably of very little help. But it was a great summer, and as a thank you and farewell before we left for college, the owner and his wife took us out for dinner -- not to a nice red sauce joint in the suburbs, but to a trendy fine dining establishment all the way in Cambridge, MA. I had never experienced anything like it before, and it blew my mind.

Gabriella: Right before I turned 16, I started working at Tommy's in Cleveland. Tommy's is famous for milkshakes, and making those shakes was my first job. Eventually I moved up to serving, and spent about 7 years at the restaurant (I still know the menu by heart). And at some point this guy started leaving mix CDs for me at the front counter...that guy is now my husband. 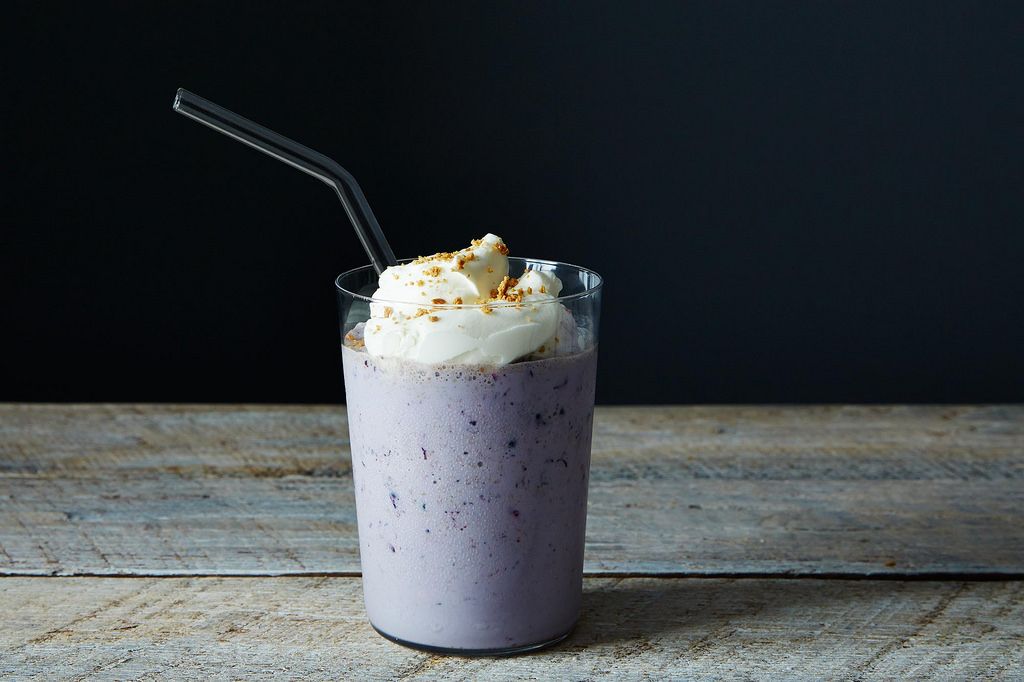 Jahmekya: My first job was at an alien-themed café in Santa Monica, where I worked as a barista. On my first day, a man came in and paid for his latte with a crystal that he told my boss would make the café rich. Needless to say, it was a crazy place and a wild adventure of a first job.

Marian: Growing up, I'd "work" behind the concessions counter at the theater where my parents worked, slinging candy and popcorn and fountain sodas. I ate a LOT of Twix bars. But my favorite part was helping to make the spice sachets for the hot apple cider we served in the "upstairs lobby" during the winter. Mulling spices are still a huge scent memory for me. 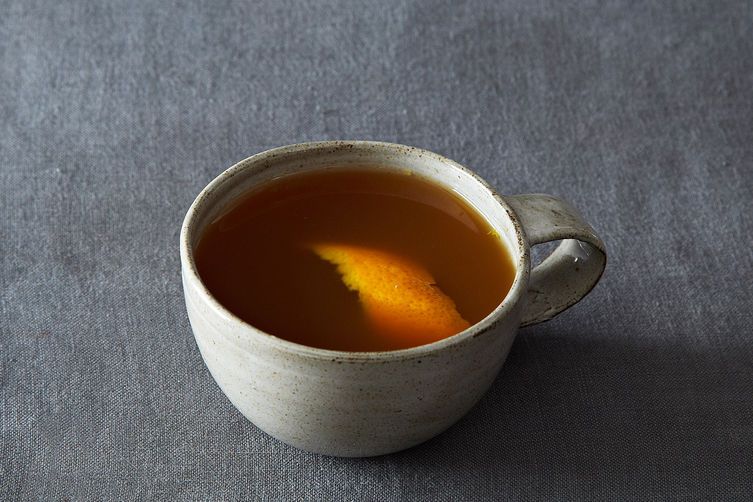 Lucy: Throughout college I worked at the campus location of a Midwestern bagel franchise. The shop was tiny and staffed entirely by students. We constantly showed up late to start our (6 AM) weekend opening shifts -- often feeling, ahem, under the weather. We started obnoxious sing-a-longs to the Billy Joel soundtrack that played on repeat and considered ourselves official testers for every wacky bagel-and-cream cheese combination we could think of (bacon-scallion on cinnamon sugar anyone?). Once in the summer, when it was super slow, a coworker actually did gymnastics in the back -- like, actual backflips.

Two years and five pounds later, I hung up my apron, but I can still slice ‘em like a pro. The trick: Start horizontally with your hand on top and when you get halfway through, flip it vertically (hand on top again; bagel perpindicular to the surface) to complete the slice.

More: Share the bagel love with this fun idea for a Not Sad Desk Lunch. 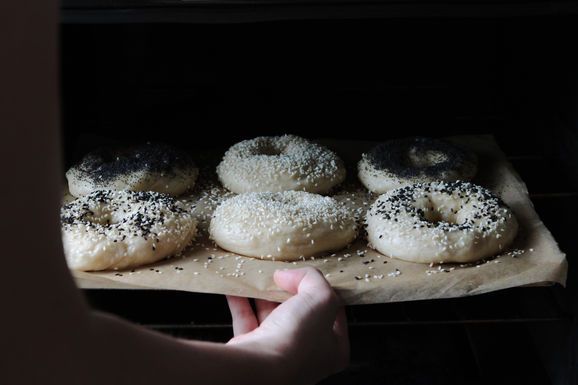 Charlotte: My first job in the food world was working at a ludicrous country club in Massachusetts as a cocktail waitress. It was interesting because not only did they not have a bartender working during the day, but they also neglected to ask me if I knew how to make drinks. Of course I had no idea, so I just guessed (mostly I just went heavy on the liquor) and shockingly (or not), no one ever said a word -- it was great!

Posie: My first job in food was waitressing and hostessing at the Beachead Restaurant on Block Island. I dropped a lot of knives on the floor (slippery little devils) and snuck a LOT of warm bread from the kitchen, which I ate covertly in the women's bathroom.

Sarah: My first job in the food world was at a restaurant in Baltimore called Regi's, where I worked as a waitress and spent an inordinate amount of time in the freezer out back, hiding from scary customers and communing with the pies.

More: Get your pie on with these fun tools.

Do you have a great story from working a front-of-house restaurant job? Share with us in the comments below, and check back in on Friday for the back-of-house edition!

AntoniaJames October 26, 2014
My first job (other than working for my mother, doing administrative/clerical work in support of academic research) was at Baskin-Robbins in Fairfax VA, at age 15. I learned how to construct and decorate ice cream cakes -- we used sheet and round layer cakes from a nearby bakery -- which was great fun. I learned patience and how to keep going when bone tired and really hot, with no end in sight to the line of waiting customers. Most important, I learned about the importance of tipping as generously as one can. To the nice old guy who came in every day and ordered a vanilla malt, even in the dead of winter, wherever you are, thank you. ;o)

almacucina October 24, 2014
My first job ever was serving coffee at Dunkin Donuts to elderly gentlemen who showed up every morning like clockwork. My best day there was when the baker let me fill the jelly donuts! My first real front of the house experience was at an Italian restaurant. Bringing out the entrée to my very first customer I slipped and dumped a plate of penne right in his lap! Luckily I found the back of the house a few years later and that's where I really excelled!

Nicole O. October 24, 2014
I hopped around from restaurant to restaurant in high school but my favorite memories came from working as a server at Ponderosa. We used to sneak the mini desserts and dinner rolls in our apron and hide in the women's bathroom to eat. We would just sit in the parking lot after work and hang out till all hours. No one was old enough to drink at that time.