Today: Yogurt masquerades as pasta sauce in the role it was born to play. 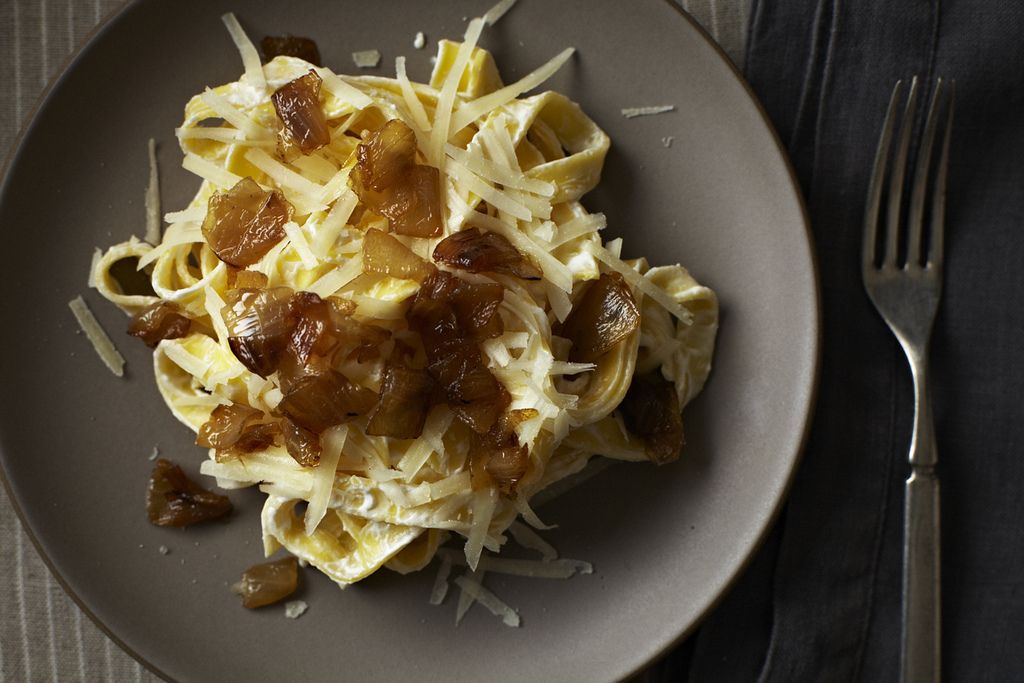 It's almost too obvious: Take one thing you like, put it on the other thing you like. This explains why we put cheese on our apple pie, pineapple on our pizza, pizza on our bagels. It doesn't always work, but we'd be fools if we didn't try, right?

So when I tell you that you not only can but should put straight yogurt on your pasta, I understand why you're looking at me like I just told you ketchup was a perfectly good marinara sauce. It couldn't -- shouldn't -- be that easy, right? 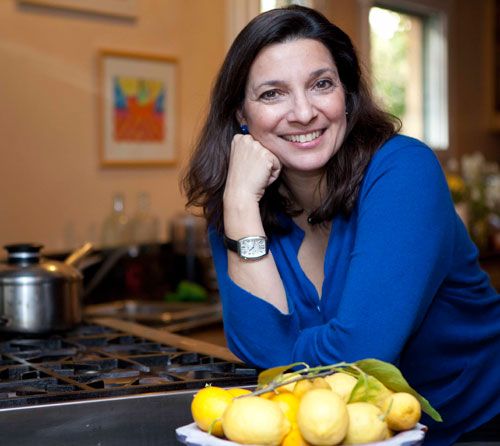 Well, until recently, it wasn't. Diane Kochilas, author of 18 books on Greek cooking, first developed this recipe as a variation on a theme she saw repeatedly in her travels in Greece. As she told me, this was an "adaptation of a very classic Greek island dish that calls for a very obscure cheese, which I reworked with yogurt." This was a genius move. 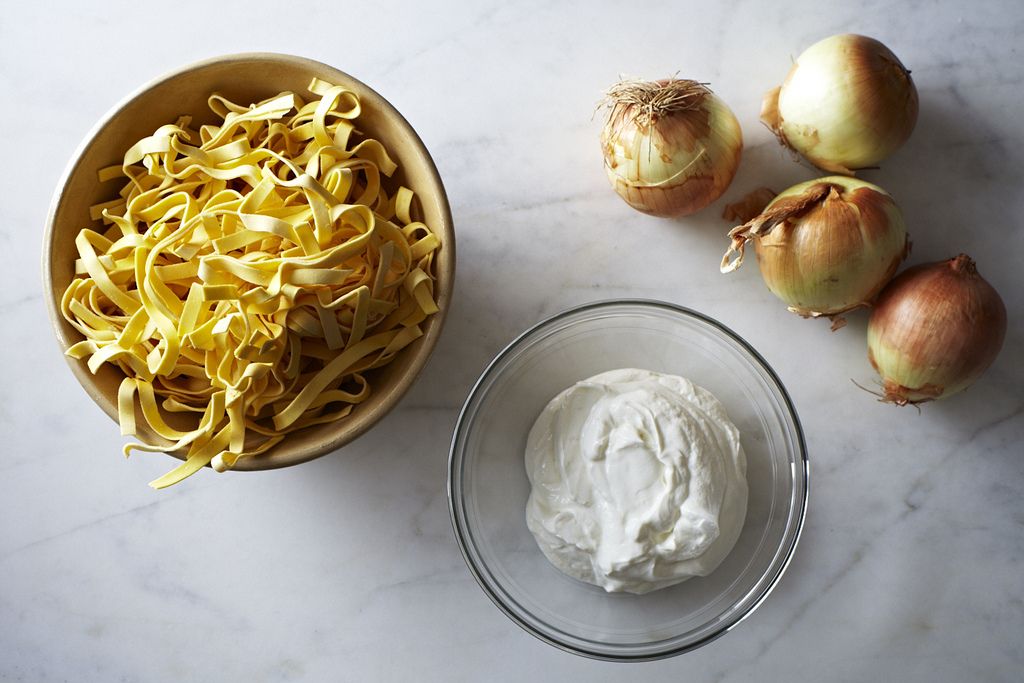 But at the time, in order for the yogurt to thicken enough to coat the pasta -- and not slip off into a puddle at the bottom of the plate -- you had to remember to strain it for two hours. This is hardly something to grumble about, but it did keep this dish in the realm of dinners you have to think about before you're hungry.

Now, with the widespread availability of thick, Greek-style (i.e. already strained) yogurts, this is an almost embarrassingly ready-to-eat food. 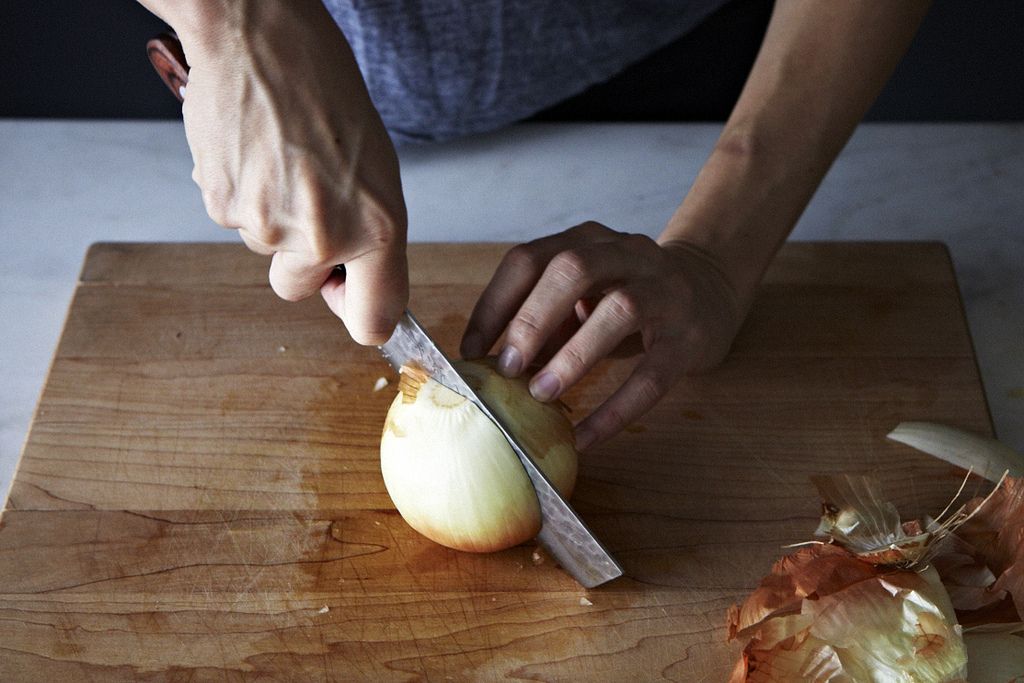 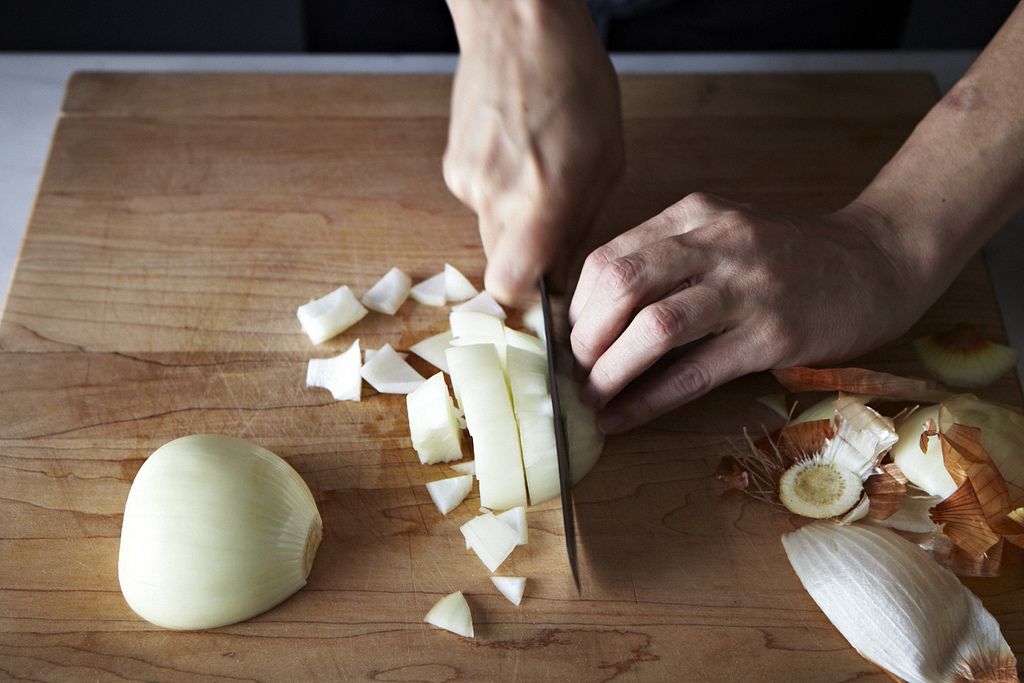 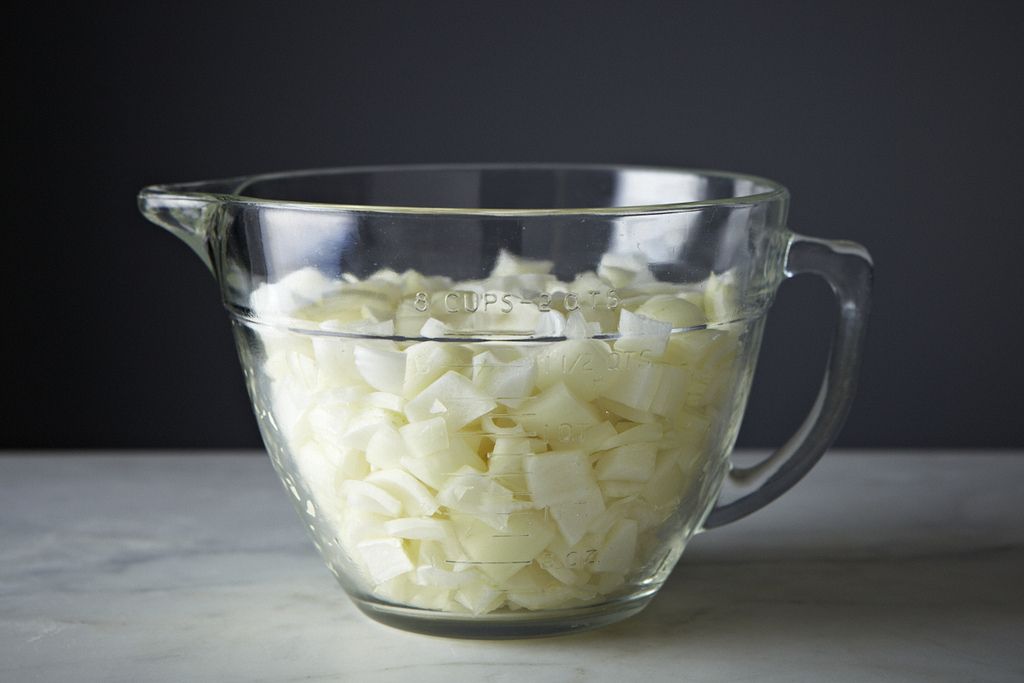 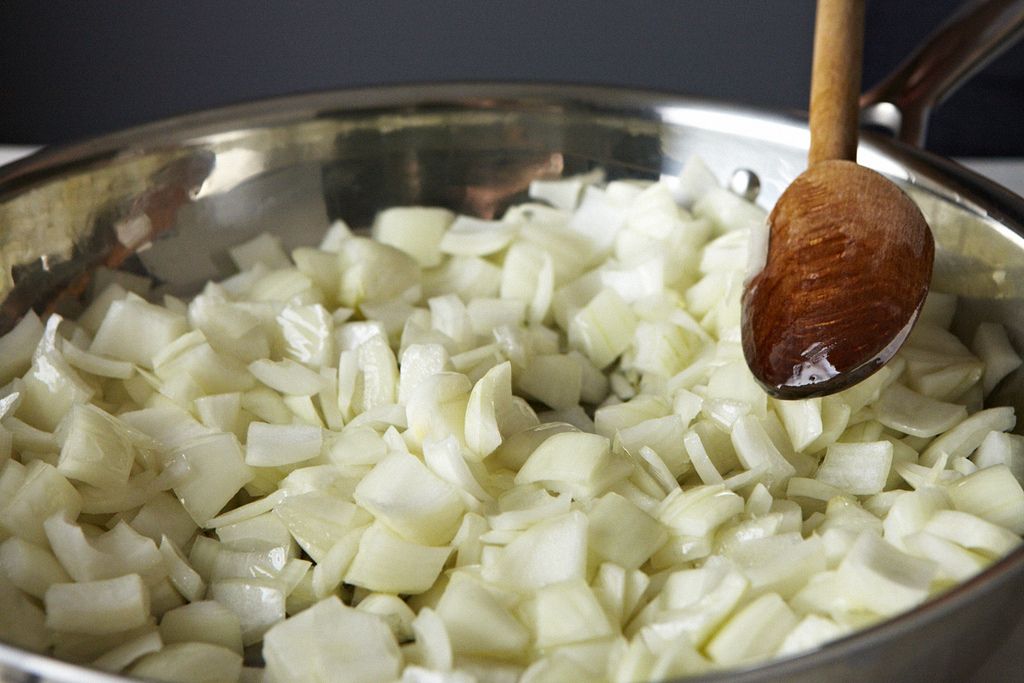 The only step that takes any time at all is caramelizing the onions, which you'll want to do right. They should look like stained glass when you're done, and taste like honey. 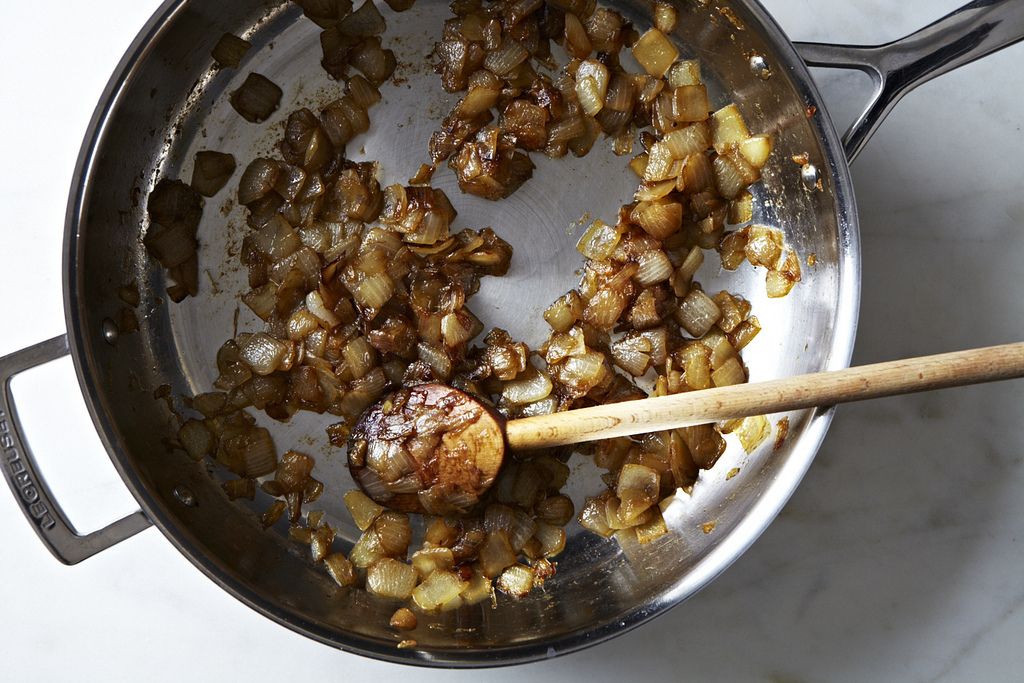 Then all that's left is to boil your pasta, stirring a little of its starchy, salty water into the yogurt to complete your sauce. Yes, now it is officially no longer yogurt, but "sauce". 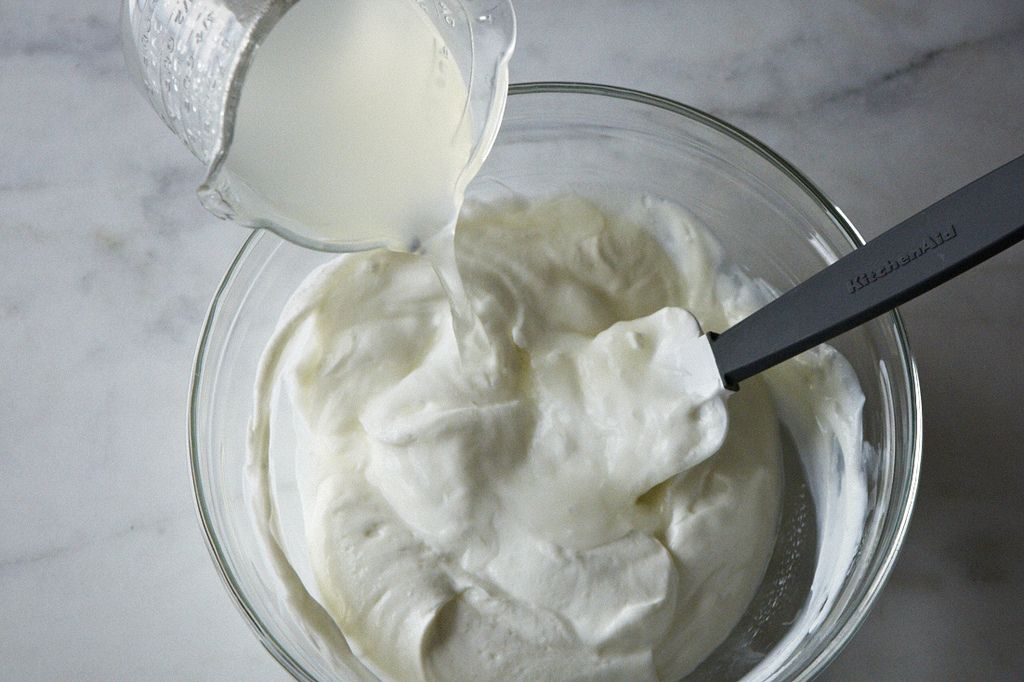 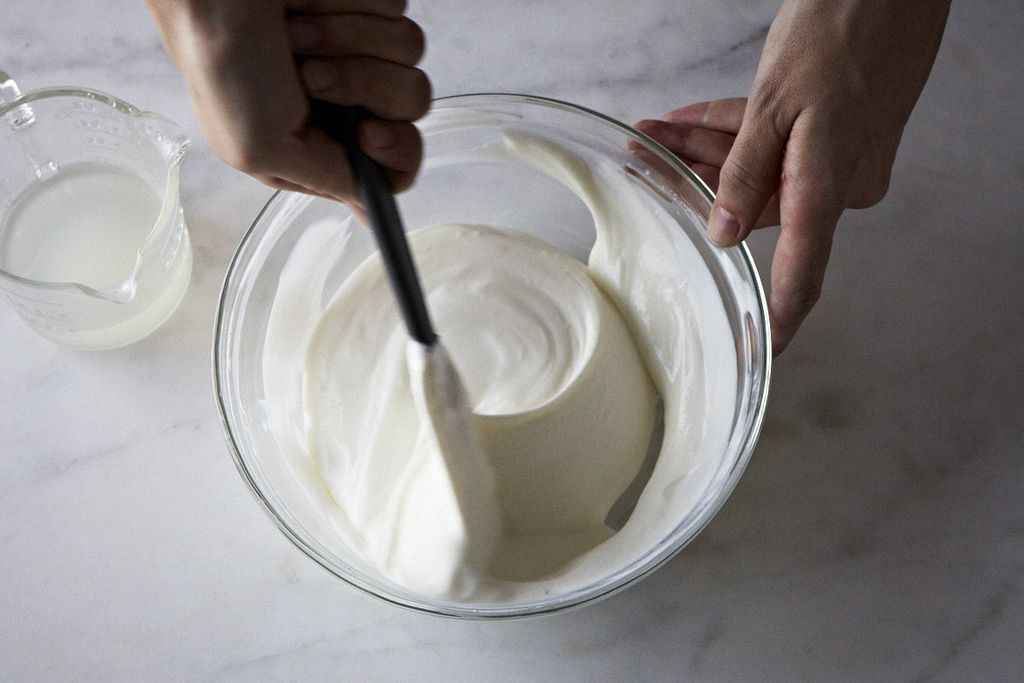 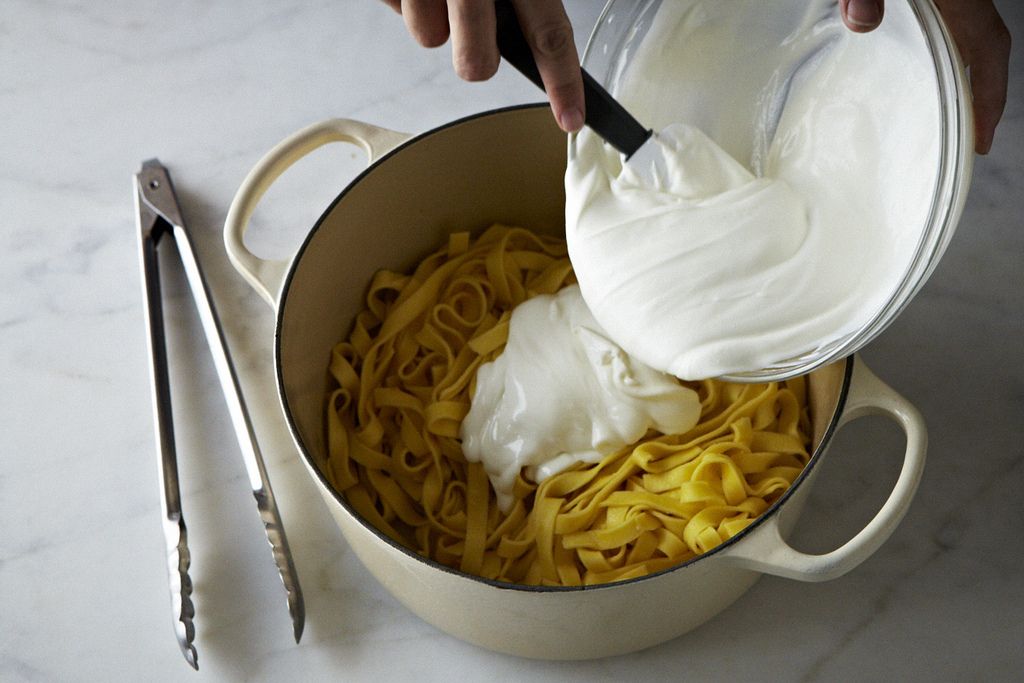 There are endless ways you could add a little something to fancy up the meal -- like spinach. Blend it with peas and mint. Or tahini. 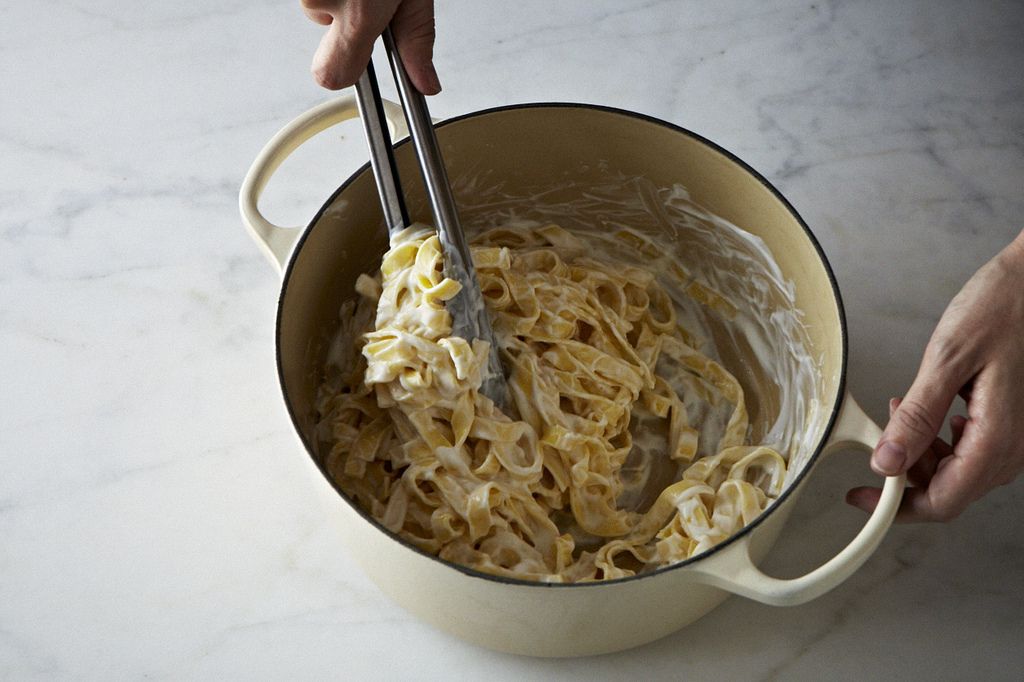 But Kochilas goes simple enough to stay within our reach (and our pantry's), indulgent enough to balance out the fact that this is essentially a cream sauce imposter.

Layer on those onions and long scrapes of pecorino, and you have a five-ingredient powerhouse to get you through anything: last-minute dinner parties, date nights, family affairs, vegetarian friendsgivings, and all the cold nights in between. 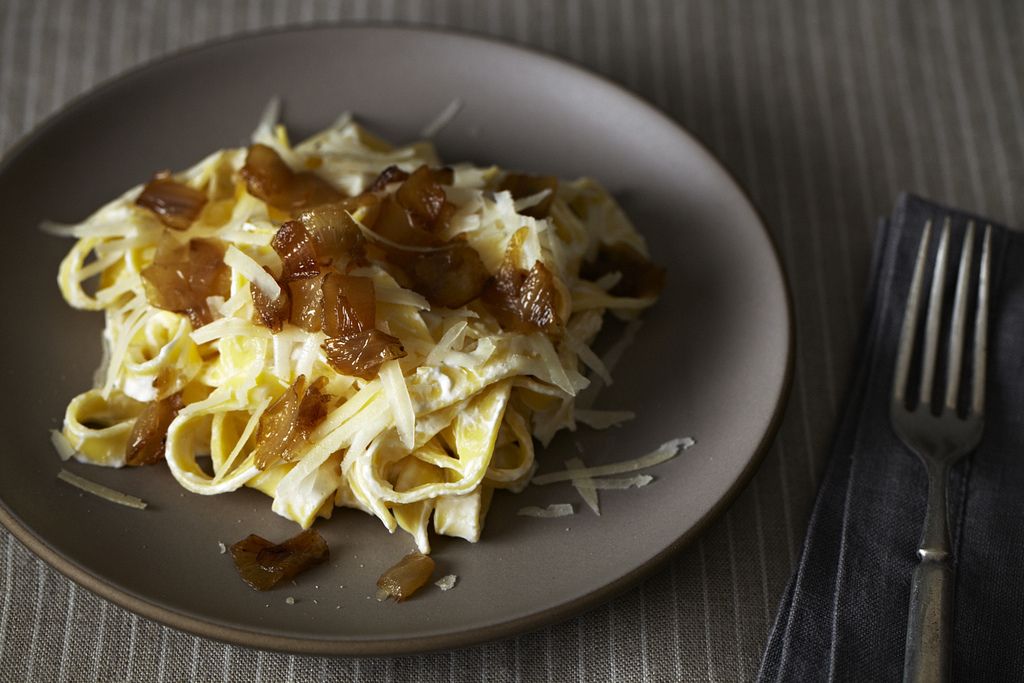 HalfPint April 17, 2018
I had high hopes for this pasta, but it was only "ok" for us. We used Chobani whole milk plain and a little less than half the amount in the recipe. Too tangy. Could have been the Chobani. Not likely to make this again.

Ally July 11, 2015
I have eaten yogurt with pasta ever since I was a little kid. My and my sister always got really weird looks from our friends but it was so good with a bit of olive oil, salt and pepper so we didn't care. I'm glad to see that yogurt pasta is catching on!

diana May 23, 2014
i have simmered the yogurt before with a little bit of feta, fresh garlic and fresh thyme, tossed the pasta with roasted asparagus and it was divine :)

Amaka January 10, 2014
Does this store well in the fridge for leftovers?

Britastina January 11, 2014
Yesssss! It is one of the most sophisticated pasta dishes I have ever tried. As always, the more basic a dish is, the tastier it is, and this is a winner. I love eating it cold. Sou vide(?) would be perfect. Come to think it, I'll prepare a large amount and freeze it in single portions.

Britastina November 12, 2013
Fixed this tonight and it was wonderful! I followed the recipe, as I always do when trying a new recipe, and couldn't find anything wrong with it. A real keeper! Actually, I'm going to fix it again later this week. I hadn't thought of fried sage. Love it and will include it night after tomorrow.

Victoria G. November 12, 2013
This was dinner last night. My two teens like it bet started suggesting adjustments for next time. My son wanted more salt in the sauce to lower the tang. my daughter wanted more cheese. Someone suggested browning sage with the onions. After dinner I left for a meeting -- when I came home someone was standing at the refrigerator tasting the cold leftovers and said, "And it's really good cold!" Slicing onions next time. This is a great recipe.

TaurusChef November 7, 2013
"vegetarian friendsgivings" I LOVE IT! THANK YOU! :)

Vishesh V. November 7, 2013
since last four years I have been using strained yogurt in my dressings and in pastas and tastes delicious. It is a good subsitute also for mayo

JenOzmun2010 November 6, 2013
Cooked this for dinner tonight. Amazing! My husband was pleased, which is no easy feat! Delicious. I'm wondering though what might be a good meat to serve with this that would work well with the pecorino and onions? Any ideas?

TaurusChef November 7, 2013
It would only sully it to add meat.

erika November 6, 2013
You could also use creme fraiche instead of yogurt. I make a version of this with creme fraiche, fresh squeezed meyer lemon juice, some lemon rind, and you dump the hot pasta onto a bowl of raw, fresh arugula, toss and serve with freshly grated parmesan. DIVINE.

Britastina November 6, 2013
OK, this sounds and looks way to good to be true. But, the ingredients are all heavenly. Too late for supper tonight but I will fix it for lunch tomorrow. I'm a 3 - 5 ingredient kind of gal. Rarely have I found a simple recipe to fail.

Alyssa H. November 6, 2013
I don't typically like yogurt all that much but this looks amazing. Does it have an overt yogurt flavor/taste?

Kristen M. November 6, 2013
I'm not that into yogurt either, but warming it up with the pasta mellows it, and the caramelized onions and cheese balance out the tang nicely. If you really don't like yogurt ever, though, you might not like this!

durun99 November 15, 2013
I found 2 cups of yogurt to be extremely overpowering. The rest was good though so I will try this again but with no more than 1 cup of yogurt.

durun99 December 21, 2013
Just tried it again with one 7-ounce container of Fage yogurt and everyone loved it this time.

ATG117 November 6, 2013
I am absolutely in love with this idea. Can't believe I never thought of it and can't wait to make it. What percent fat Greek yogurt did you use. I normally purchase the 2%. Do I need to go full fat for this? Also, any suggestions for other cheeses? I'm not a huge Romano fan.

Kristen M. November 6, 2013
I recommend whole milk if possible -- so good -- but 2% should be good too. And how would you feel about Parmesan? That would be good.

Gloria P. November 6, 2013
Love this it will be dinner tonight

Rhonda35 November 6, 2013
As I read this column, I thought, "This isn't anything new! This Diane-lady took this recipe right out of Amanda's book, COOKING FOR MR. LATTE!" Took my copy of the book off the shelf, opened to food-stained page #197 and laughed as I discovered the recipe was given to Amanda by Diane Kochilas! :-) So, to all the doubters out there, I have to tell you: this recipe is delicious, absolutely delicious. I've made it countless times in the ten years since C.F.M.L. went into print and it is always a hit - especially when you get those onions caramelized perfectly - mmm. Derekp, I also slice rather than chop the onions - I like the way the strands of onion wrap around the pasta. Lorraine, I've added bacon before - cook that first, then caramelize the onions in the bacon fat. It's great that way. Bon appetit, everyone (I don't know how to say that in Greek.)

Alice G. November 6, 2013
When the ingredient list is wholly composed of things I already have in my kitchen (dried pasta, no fresh- forgive me), I have no choice but to give a recipe a go. Will be making this tonight, but adding mushrooms, because 1) it sounds very promising and 2) I really don't want to run to the grocery store...

Kristen M. November 6, 2013
Dried pasta works great too! I would just cook to al dente rather than soft in that case.

Alice G. November 6, 2013
This was fantastic. As good as it is with its whopping 5 ingredients, it begs to be made one's own with different additions. Thanks for sharing this, Kristen!

derekp November 6, 2013
I think this is a bit of genius resulting from a collision of food cultures. Will need copious amounts of cheese and carmelised onions to work (i.e. taste of anything) and let's slice the onions rather than chop them, eh?