How to Make Blueberry and Rye Slab Pie

Every other Friday, Yossy Arefi from Apt. 2B Baking Co. shares dessert projects that demand a little extra time and effort. Because your weekends should always be sweet.

Today: Feed the masses at your next summer gathering with an ooey, gooey, tasty mess. 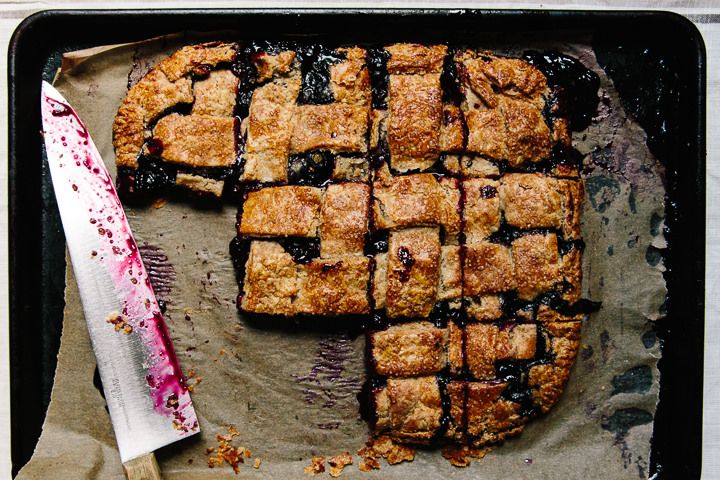 Slab pies are pretty easy to love: They require about the same amount of time as a round pie, but they feed a heck of a lot more people; you can fill them with just about any fruit you like; and the crust-to-fruit ratio is spot on. With a lattice top like this one, slab pie looks like the juiciest, most delicious woven blanket you’ve ever seen. I mean, don’t you just want to curl up with this thing? 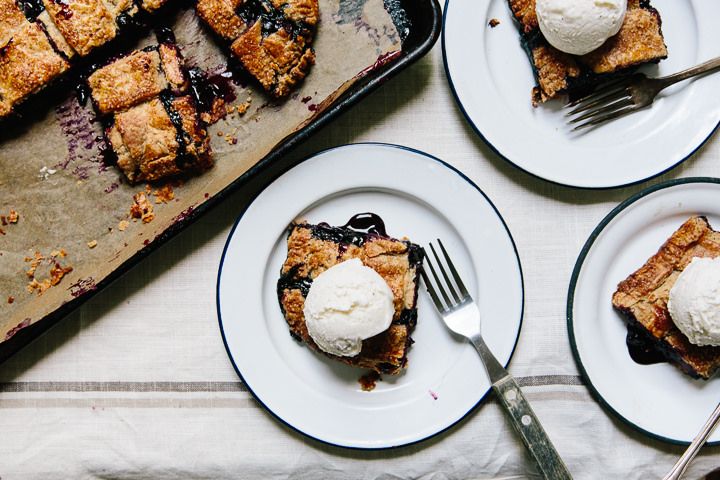 Slab pies are most often made in a jelly roll pan, but for this version I wanted something that was part slab pie, part giant pop tart, and sturdy enough to hold and eat without a fork, if necessary. I used my favorite rye crust (with a few alterations) for the base, then I filled it with a simple mixture of blueberries, sugar, flour (to thicken all those delicious juices), and some fresh lemon zest and ginger for a little zing. I love the bright flavor of grated fresh ginger in summer pies; it works with just about any fruit.

I don’t mind pies that are big, juicy messes, so I gave this slab pie a lattice top -- which caused a bit of leakage onto the sheet pan. For a less juicy mess, roll out the second crust and lay it over the berries like you would with a traditional double-crust pie, then fold the bottom edge up over the top and seal it well with a fork. Either way, you’ll have to fight me for a corner piece. 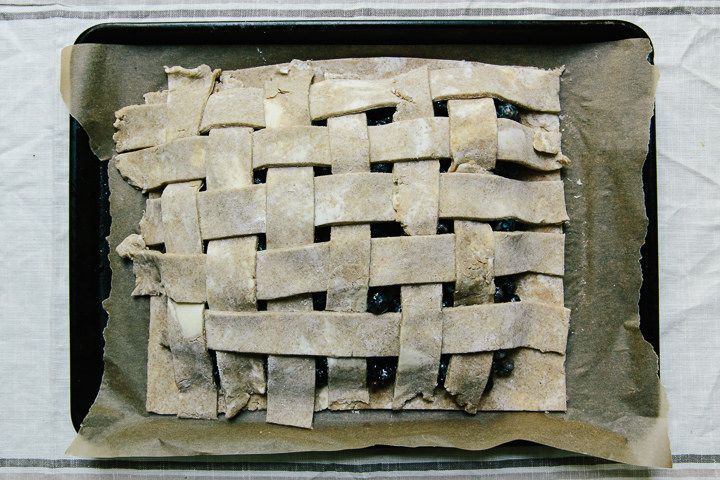 Add the apple cider vinegar to the water and make a well in the center of the flour mixture. Use a gentle hand or wooden spoon to mix about 12 tablespoons of water into the flour until just combined. If the dough seems very dry, add more water, a couple of teaspoons at a time. You have added enough water when you can pick up a handful of the dough and squeeze it together without it falling apart. Press the dough together, then split it in half, form it into discs, and wrap each disc in plastic wrap. Chill the dough for at least one hour before using it, or overnight.

More: Learn how to properly roll out pie crust. 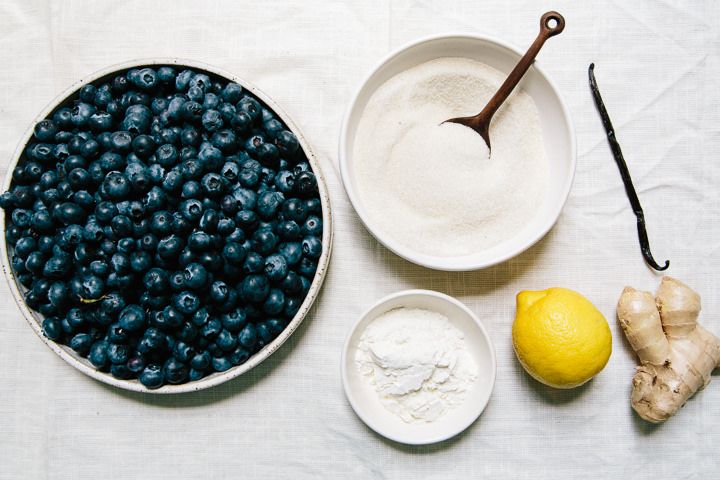 Preheat the oven to 400° F and line a baking sheet with parchment paper. 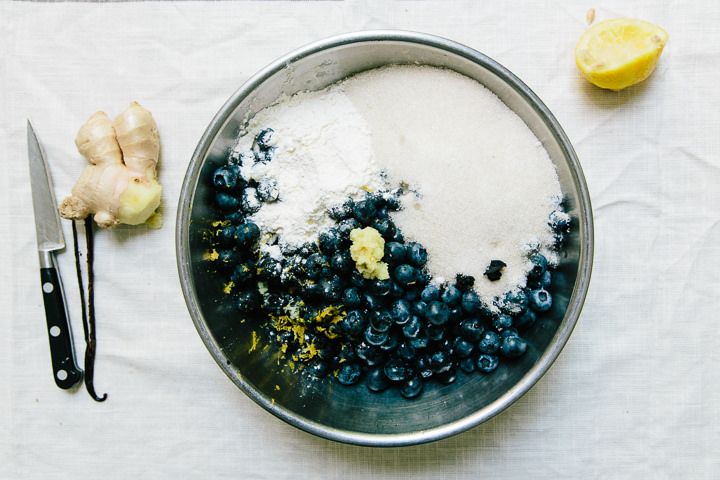 On a lightly floured surface, roll out one piece of dough into a roughly 8- by 12-inch rectangle, 1/4 to 1/8 inch thick; trim the edges so they're straight and even. Gently move the dough to the prepared baking sheet and put the whole thing in the fridge. Use your trimmings to patch any holes in the bottom crust. Roll out the other piece of dough to roughly the same size, erring on the larger side, and set it aside for a moment.

Remove the first rectangle of dough from the fridge and pour the blueberry mixture on top, leaving a generous border of at least 1 1/2 inches around the edges. 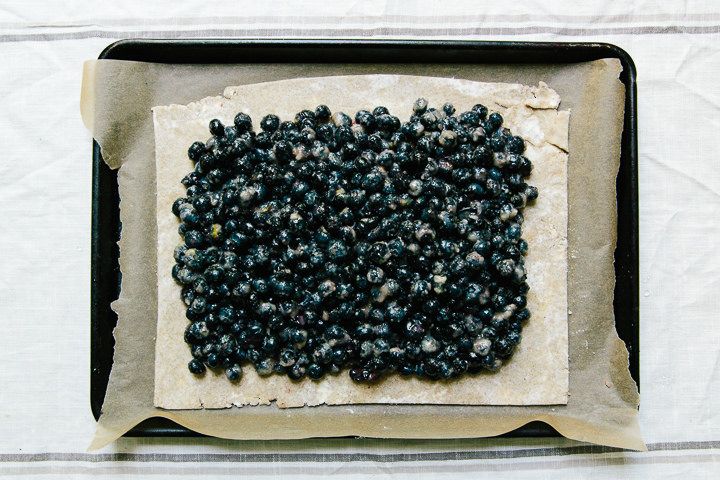 More: Don't fear the lattice! Here are some step-by-step photos to walk you through the process. 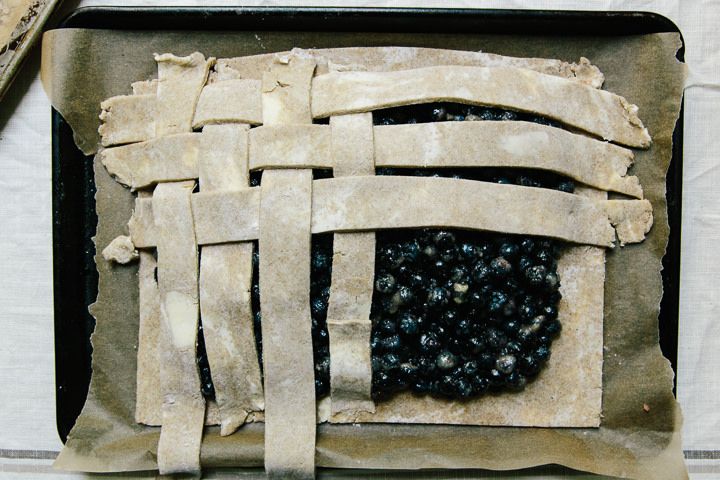 Continue until all the strips are used up and the top of the pie is covered; you may have to piece some scraps together to make the last few strips of dough. Fold the bottom crust up and over the top of the pie and press firmly with a fork to seal it. 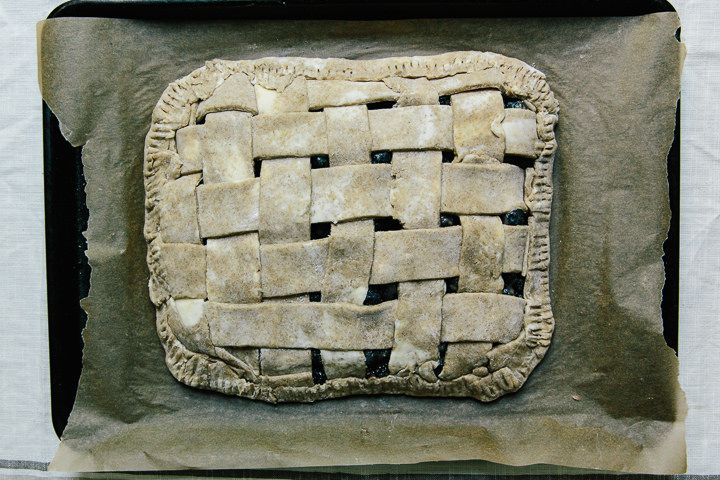 Another option is this: Do not cut the remaining dough into strips, but lay it over the blueberry filling in one piece, and fold the bottom crust up over the top and seal the edges very well by pressing firmly with the tines of a fork. Cut a few vents in the top and proceed with the recipe from there.

Put the baking sheet into the refrigerator or freezer until the crust is very firm. When you are ready to bake, brush the top of the pie with a beaten egg and generously sprinkle it with sugar. Bake the pie until the crust is deep golden brown and the juices are bubbling, 35 to 45 minutes. Cool slightly before cutting into squares and serving with ice cream or whipped cream. 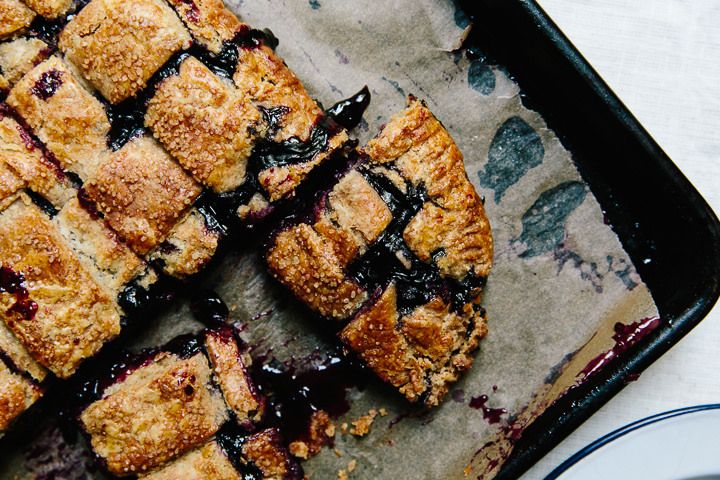 Note: Be prepared! A lattice-topped pie will probably leak, so do not forget to line your pan with parchment paper. And save that corner piece for yourself. 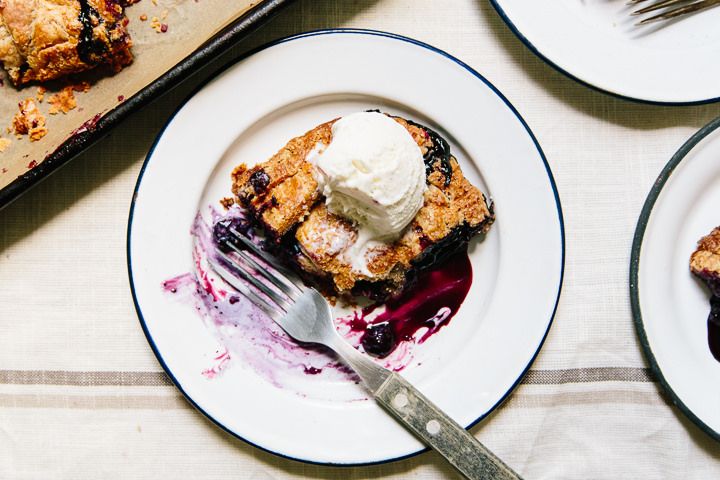 Victoria L. June 2, 2017
Any chance I can use vanilla extract instead of the bean?

Lisa M. September 2, 2014
You could also cut a design in the top crust instead of weaving strips of dough. I do that, then I have more time to try another recipe. Or eat pie...

JoyJoy June 30, 2014
Don't be silly like me and attempt to use juicy cherries in this recipe, as since there are no sides to really hold things in, the juice runs before you get the top crust on. A dumb mistake by me! Regardless, the rye crust is tasty and after baking (and after mopping up juices on the parchment before baking to avoid sugar burning), it was still a pretty and enjoyable dessert. Will try with blueberries next time! Also, I made the crust in a food processor and it worked well.

Yossy A. June 30, 2014
so glad to hear you liked the crust! yes, juicy cherries are better suited for a sheetpan slab pie like this one: https://food52.com/recipes/22689-martha-stewart-s-slab-pie

Tammy G. June 30, 2014
Lynne Carlstein, Here's a link to a wonderful gluten free pie crust called Donna Jo's Dream Pastry. It's so delicious and flakey that I have a friend who is not celiac, but uses the pie crust receipe because it's that good. I find it easiest to roll the dough out between wax paper or plastic wrap. If you have a tear while moving it to the pie plate, just patch it up and don't worry because it will not show once it's baked. I hope you enjoy it. http://gig-eugene.org/index.php?option=com_content&view=article&id=21:donna-jos-pie-crust&catid=19:baking-and-bread&Itemid=13.

SeaGrey June 30, 2014
I like everything about this! Instructions are clear, lovely pics, interesting flavour combinations. Thank you! I'll try this for Canada day dessert.

lynne C. June 29, 2014
Anybody got a gluten-free crust for something like this? I've been Gluten-free for about three years. I miss pie. I really miss pie.

JanetRoss June 29, 2014
Are there any substitutes that you would recommend for the 9 oz. of rye flour?

Yossy A. June 30, 2014
You can substitute all purpose flour. The crust may need less water to come together.

sarabclever June 29, 2014
This looks great! I can't wait to try the rye crust in particular.

AntoniaJames June 27, 2014
Somehow your lattice procedure seems much more complicated than mine. The engineer in me figured out a much more efficient way many years ago. I put all the horizontal strips down first, weave the first vertical one on the left and pinch it down a bit to anchor it, then alternately pull back to the left the odd numbered strips, lay down a vertical one, and then repeat with the even numbered horizontal strips, etc. Not sure if it's that many fewer steps, but I've done it both ways and this way seems much easier. It's also easier to explain. ;o)

Yossy A. June 27, 2014
Yes! That is a great way to make lattice too! I just have a natural tendency to do it this way for some reason. It is a little confusing to explain though, you do have a point.

AntoniaJames June 27, 2014
But be warned. Not everyone likes ginger with blueberries; I've put it in the blueberries I put up in light syrup and it's very definitely a "divider" move. It's the only add-in over the years that anyone has commented on. (The others, individually of course: vanilla, lemon, cinnamon, nutmeg, allspice, juniper berries, bay and lime. We really like bay + vanilla. I have a recipe for ice cream on the site that features bay, vanilla and blueberries.) ;o)

AntoniaJames June 27, 2014
Actually, I meant to say, not all of those add-ins at once. I often put lemon + others, vanilla + others, though I may not have done vanilla + ginger + lemon. I'm putting up another 2 dozen jars from our bushes this weekend. I'll have to do a very small test run with this combo. ;o)