What To Do With an Overload of Brussels Sprouts

Winter is coming and we're serious about keeping farmers market produce on the menu. Alexandra Stafford of Alexandra Cooks shows us how to store, prep, and make the most of it, without wasting a scrap.

Today: Make a smarter stuffing, with brussels sprouts, and learn the finer points of sprout preparation. 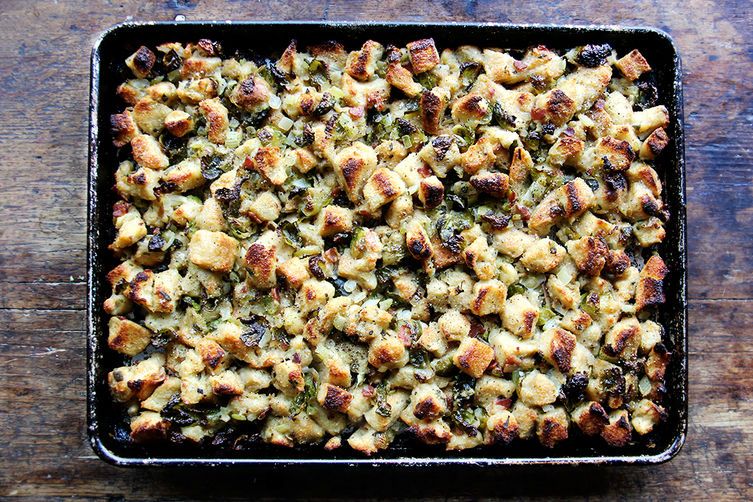 Would it be unreasonable to assume that I am not the only one in this crowd who makes recipe comparison charts? Like with rulers? And sometimes highlighters? Just making sure -- thought I was in good company. 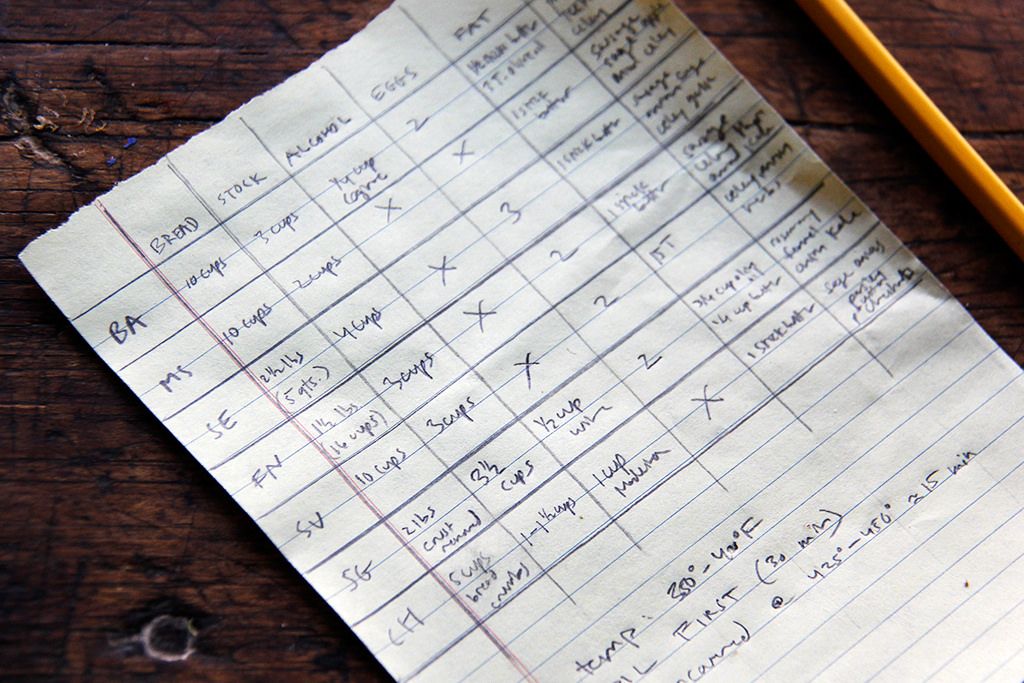 Never do I find this tool more effective than this time of year, when I dig out my holiday files and open them to find a mess of magazine pages, newspaper clippings, and old hand-written recipes, some tried and true, some still waiting to make their debut. 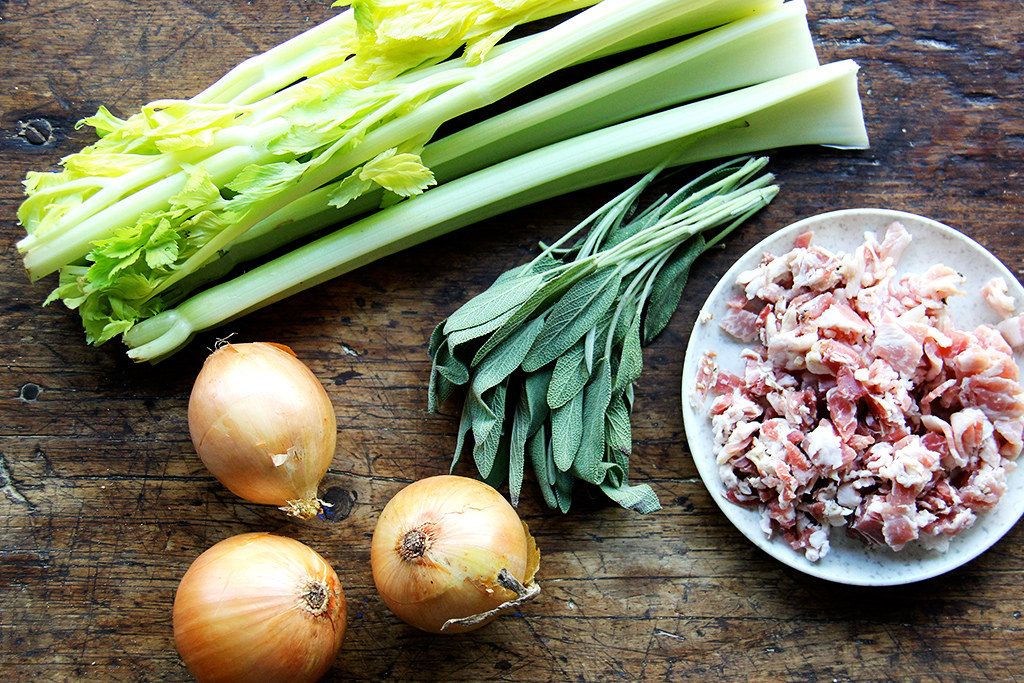 Last week, when I began analyzing my collection of stuffing recipes, my head started spinning: To toast the bread or let it stale? To remove the crust or not? To tear the loaf into ragged shards or neatly cube it up? To toast it dry or saturate it with olive oil first? And this was just the bread variable. Countless questions remained, but you get the idea. 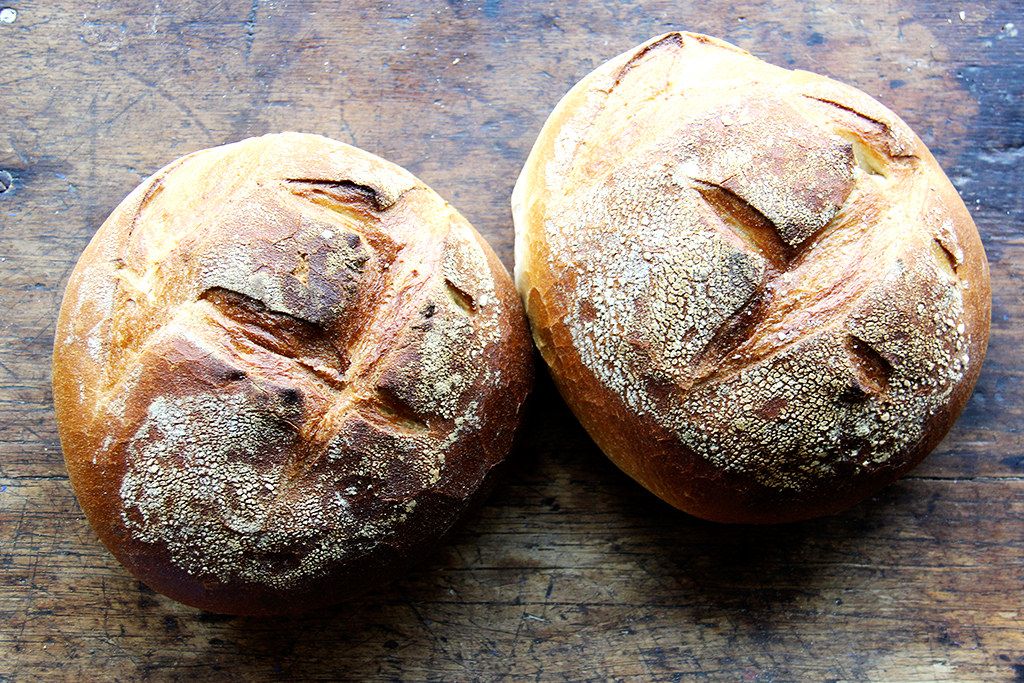 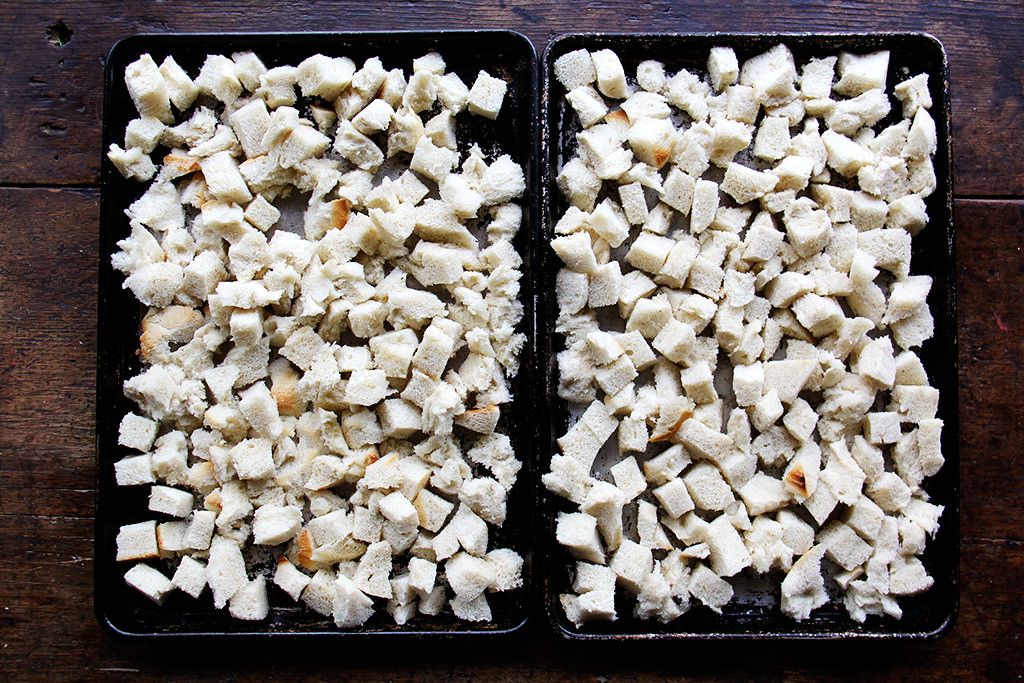 Charting the ingredients and methods put my mind at ease, allowing me to see the similarities (the general ratio of bread to stock to vegetables to fat) and the differences (the inclusion or absence of eggs, meat, and some sort of alcohol). 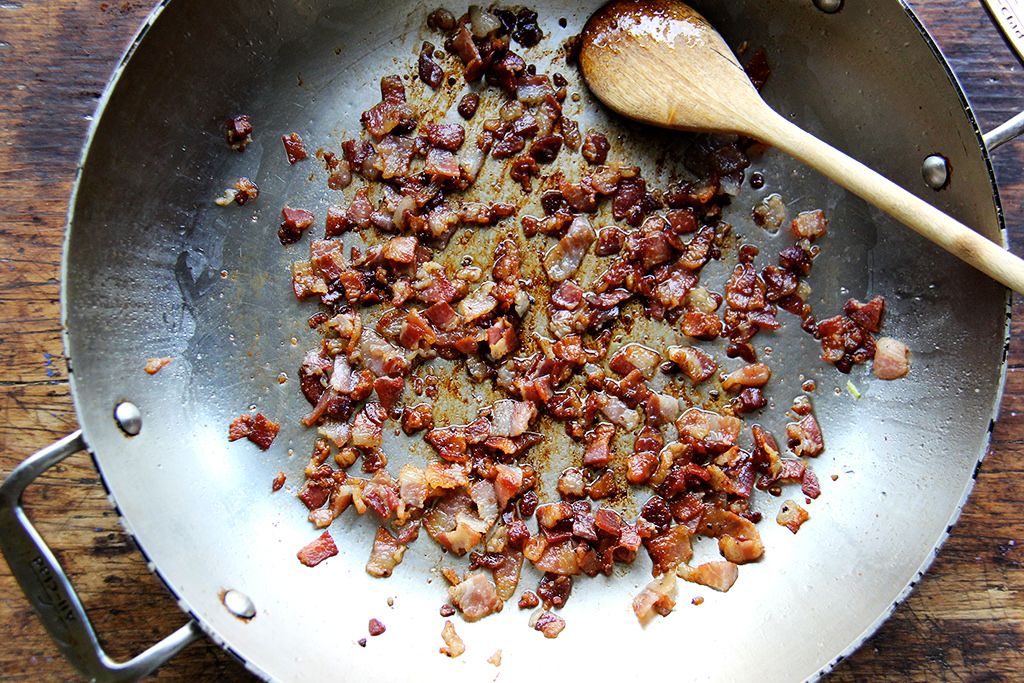 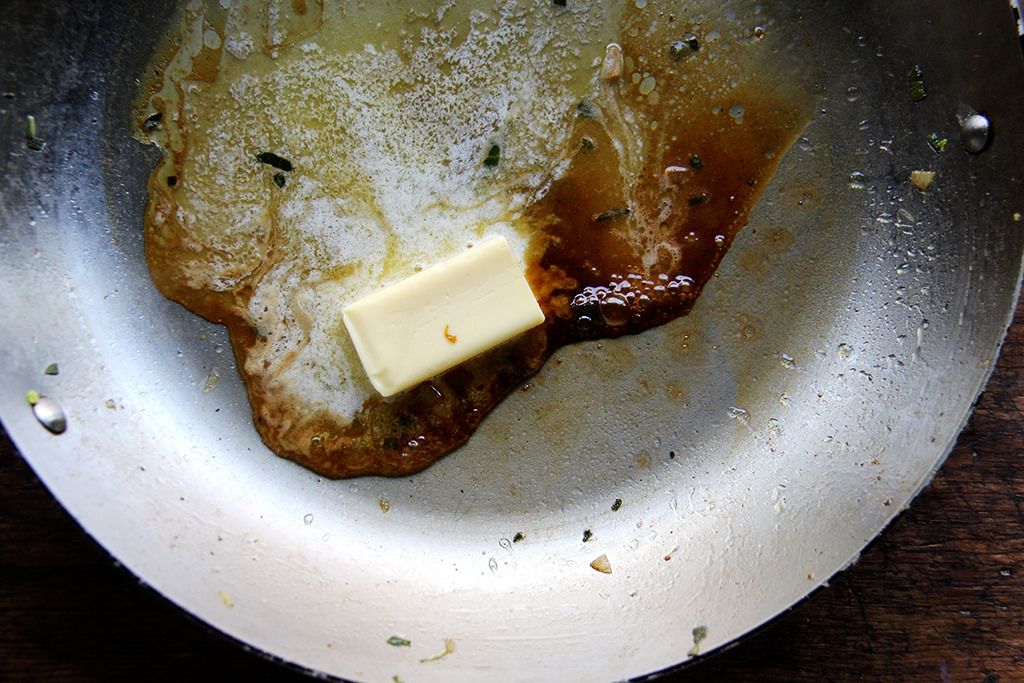 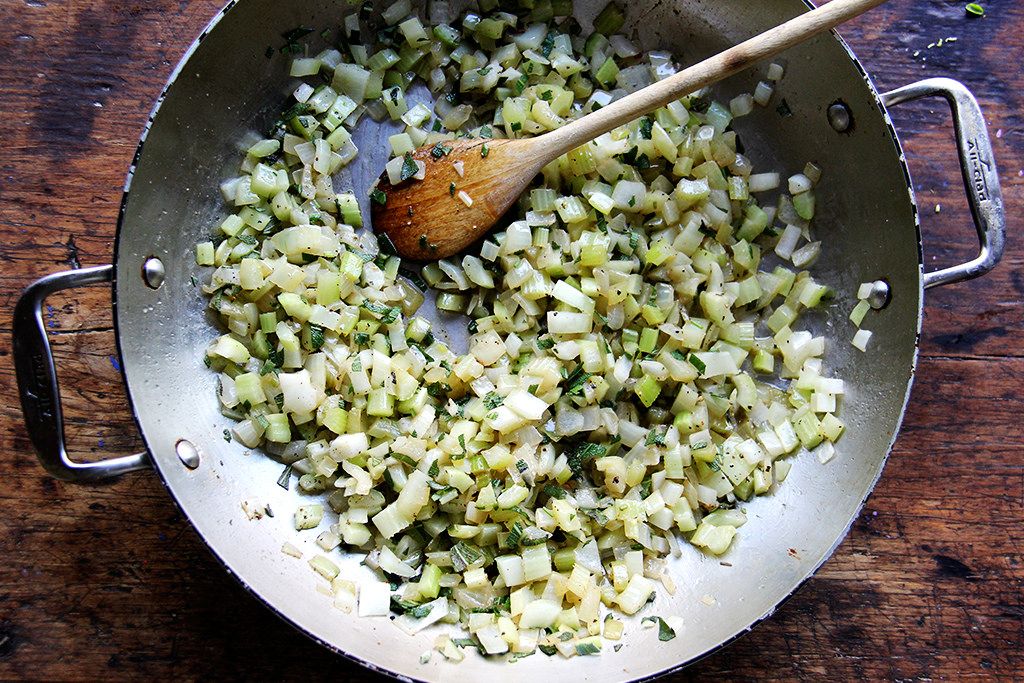 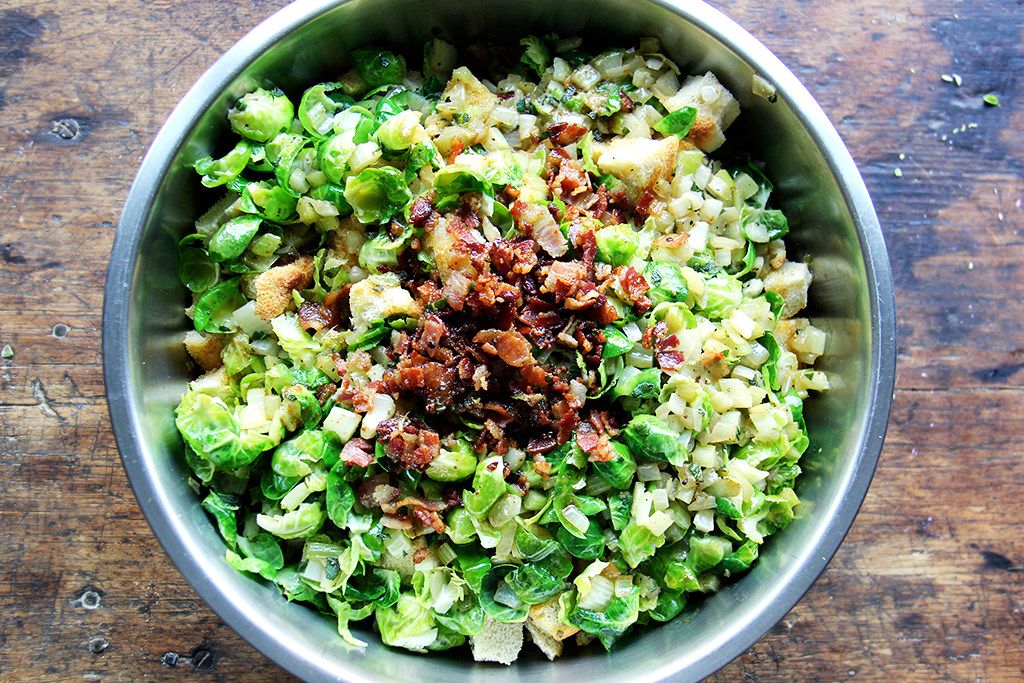 I concluded that if I threw together something along the lines of 10 cups of dried bread with sautéed onions and celery, minced sage, a fair amount of stock, and a couple of eggs, a stuffing worthy of serving to company would materialize.

But how could I make this stuffing at last be the stuffing? The one that would allow me to purge my Thanksgiving file of a dozen or so recipes? 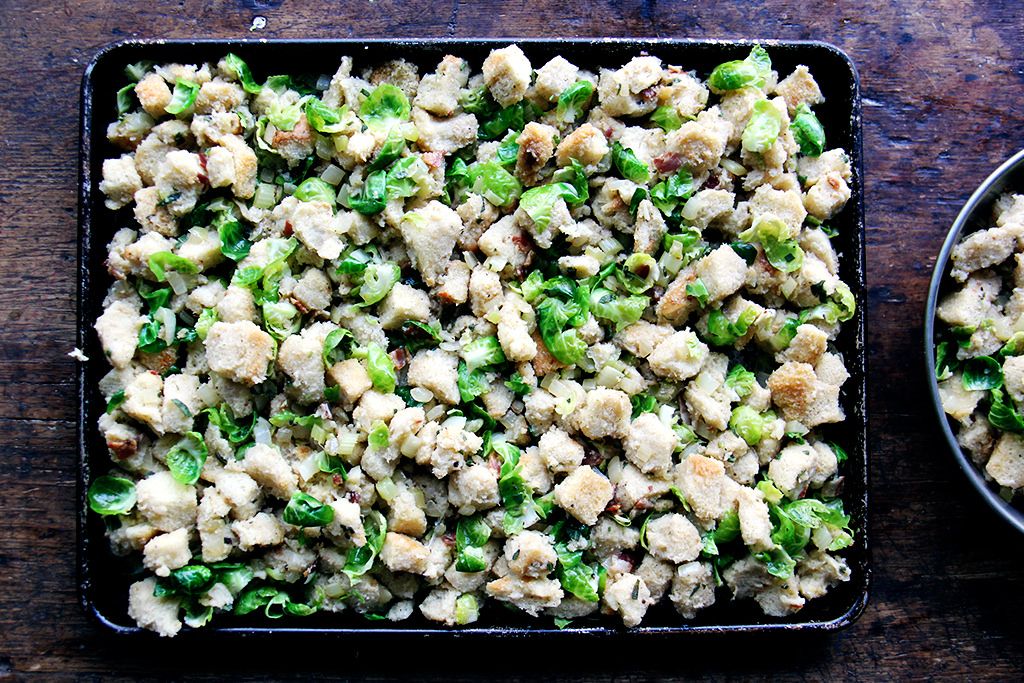 The stuffing would have to be well-seasoned with a custard-like center and crispy edges -- lots of crispy edges. I decided that a sheet pan, long known to have successfully realigned the ratio of crunch to soft in baked macaroni and cheese, would determine this stuffing's fate. And it did. With the ratio of golden topping to creamy center maximized and the added crunch of charred brussels sprout leaves and cubes of crispy pancetta, I felt I could safely pare down my Thanksgiving file.

Because the truth is that if my chart taught me anything, it's that a recipe for stuffing isn't really necessary. Countless combinations of vegetables, meats, herbs, and spices will create a memorable stuffing. But the success of any stuffing hinges on the bread being sufficiently seasoned with all of the chosen add-ins. If each cube of bread is saturated with the flavors of sage and pancetta and rich turkey stock upon entering the oven, the final stuffing, no matter the vessel, will remain creamy inside. And a blast of high heat during the final cooking phase will ensure a layer of crispy edges.

I'm not saying I'll ever give up my recipe charting. Just saying I won't lose any more sleep in the process. 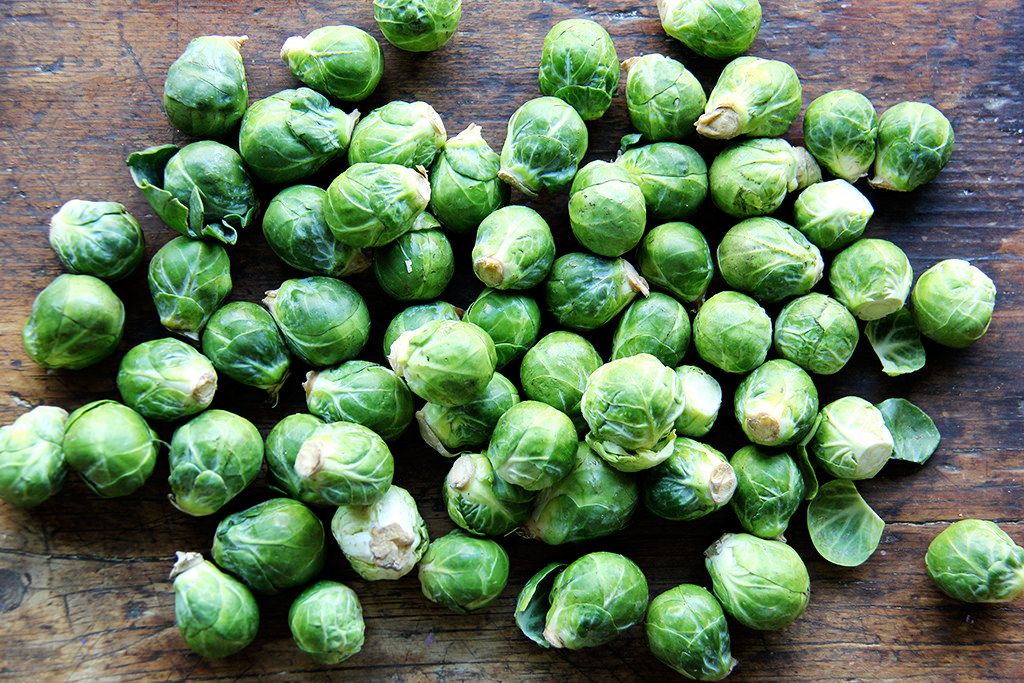 Choosing and storing your brussels sprouts:

Look for bright green sprouts with compact heads and try to avoid sprouts with yellow leaves or tiny holes. If you can, pick smallish sprouts, which tend to be sweeter and more tender. Store sprouts in a bag in your fridge for a week or so.

Remove any loose, discolored leaves, then trim off the stem. If you are leaving the sprouts whole or halving them in preparation for roasting, remove just a small portion of the stem to ensure the leaves stay intact. If you are planning on separating the leaves, use a paring knife to remove the core, then gently pull the leaves apart. If the leaves are dirty, soak them in cold water before using. 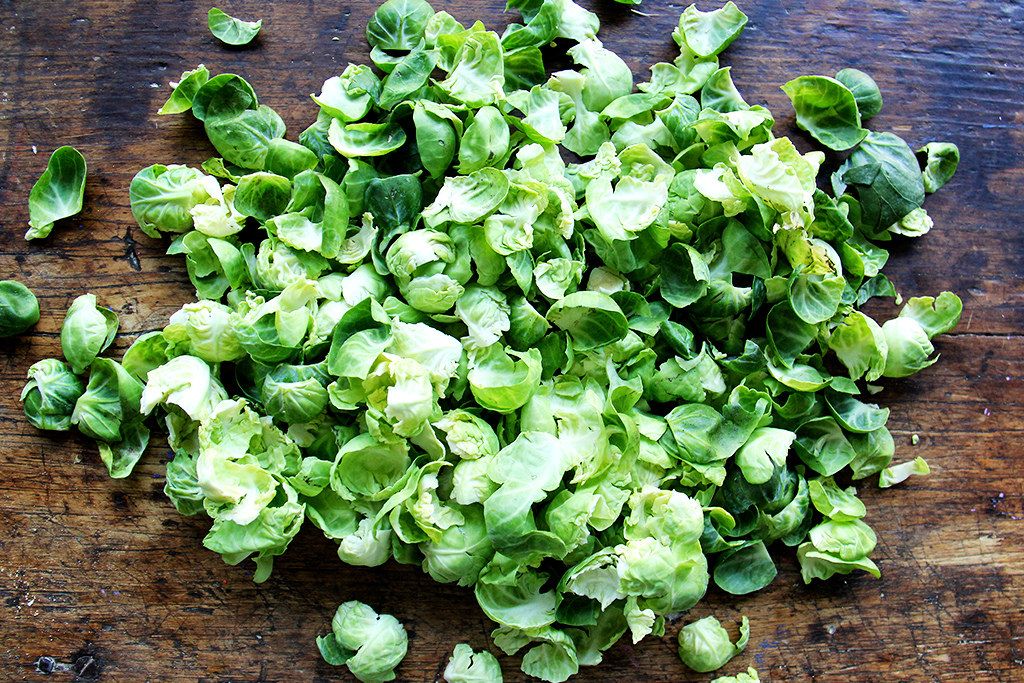 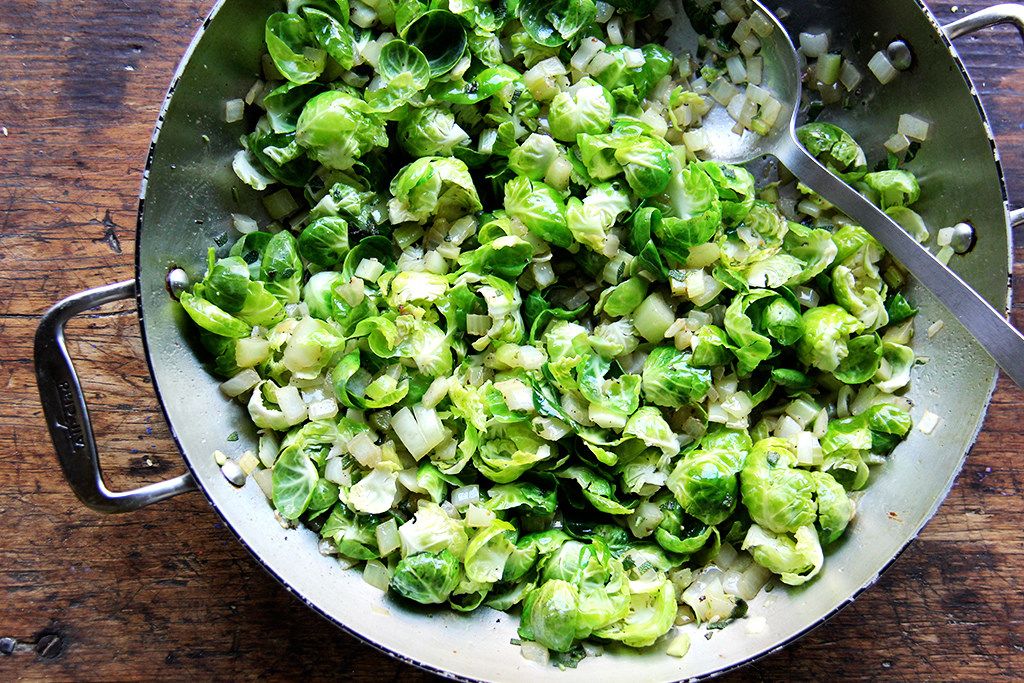 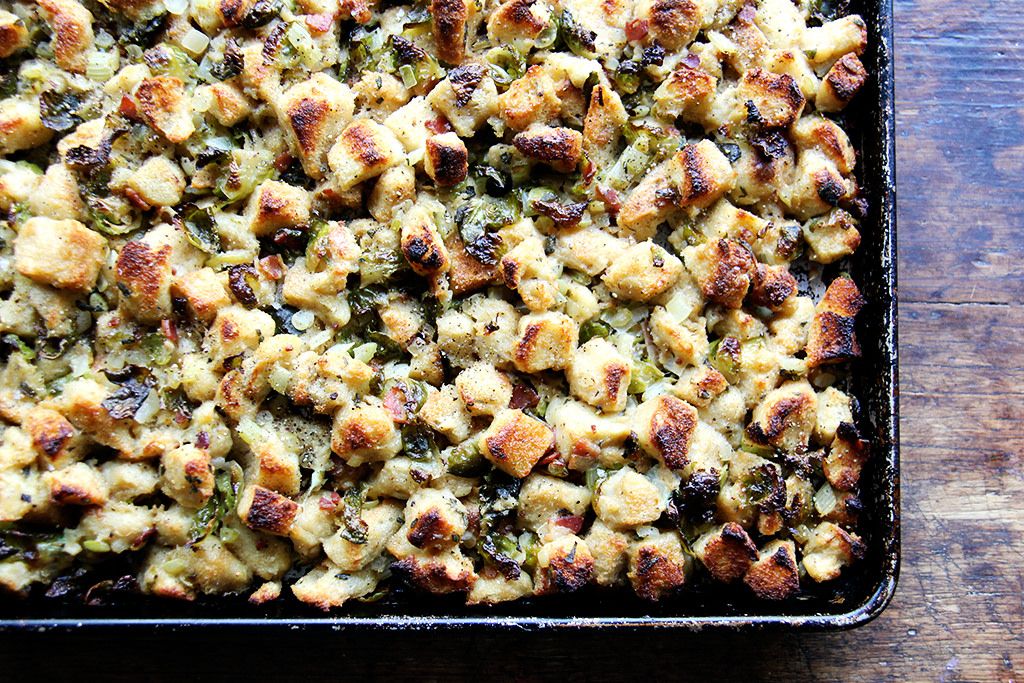 See full recipe (and save and print it) here.