Today: Rethink butternut soup with a chef's recipe that will fit into your holidays -- and the secret ingredient your soups have been missing. 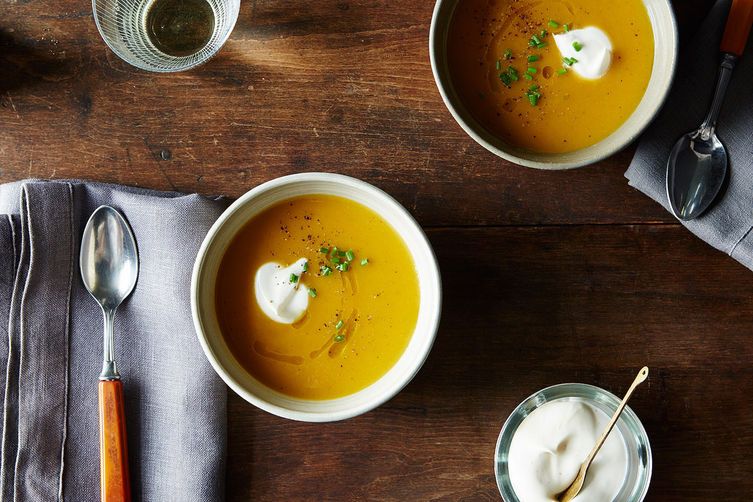 You might not always be sure where Thomas Keller is leading you -- and you probably won't be able to make out all four types of allium in the end -- but you can count on everything working together to surprise you.

It's why his restaurants are worth the price, his books points for reference and inspiration, but not necessarily meant to be cooked through. (I once -- emphatically once -- made his boeuf bourguignon, which necessitated the use of a spreadsheet, ended at 3 AM, and was what I imagine running a Tough Mudder might be like.) 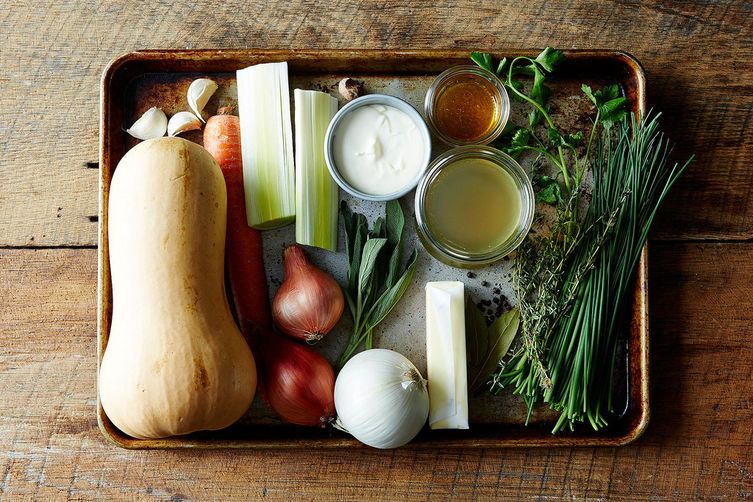 Keller's recipe for butternut squash soup, however, will not keep you up past your bedtime. It likely has a few more ingredients and steps than other smooth soups you've made, but you will want to make it again as soon as it's gone. The only time it would feel laborious is if you decided at 5 PM to get it on the table tonight. So, from 3 AM beef girl, I give you are a couple of ways to plan better.

It's a perfect recipe to make for incoming guests, by yourself in the quiet days leading up to their arrival. Its flavors sweeten and develop with a day or two in the fridge, and will go over very well in mixed company: You'll take care of the omnivores, the vegetarians, the gluten-averse, and the elderly relatives on soft food diets, all with one pot. 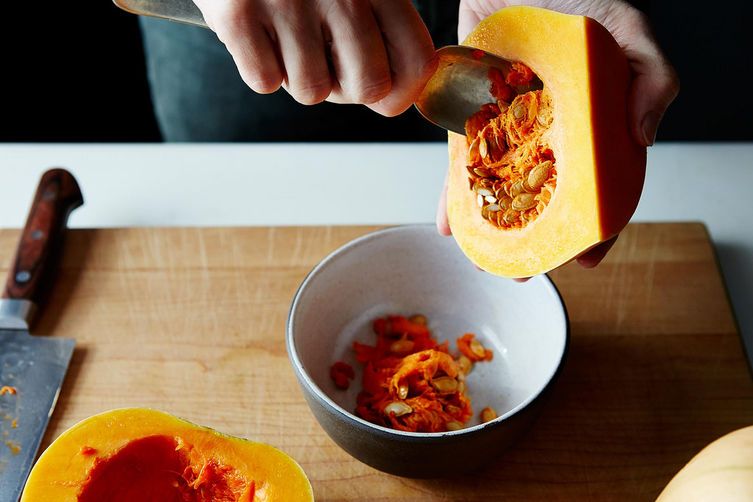 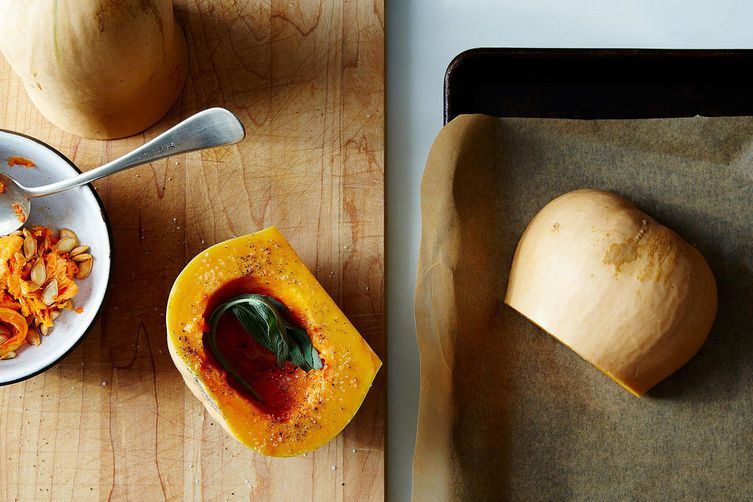 The extra care and Kellerish attention to detail also makes the soup perfect to cook with family over the holidays. I made it with my dad over Thanksgiving and, though it wasn't a project nearly on the level of the Turducken of '05, the shared prep work made the recipe seem downright quick and easy, just a good reason to hang out in the kitchen.

To start, Keller splits the squash in two: He roasts the bulb stuffed with sprigs of sage, and peels and cubes the neck to sweat with a cushion of other chopped vegetables. The former condenses and breathes in the roasting sage that's trapped in its middle; the latter stays a cleaner form of the fruit. 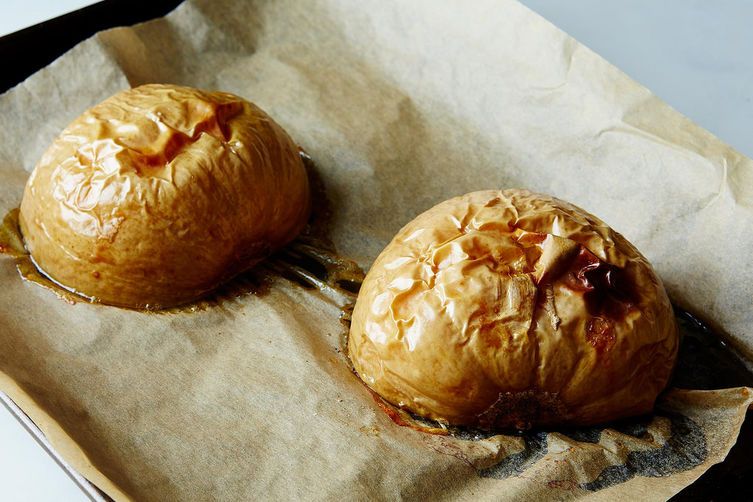 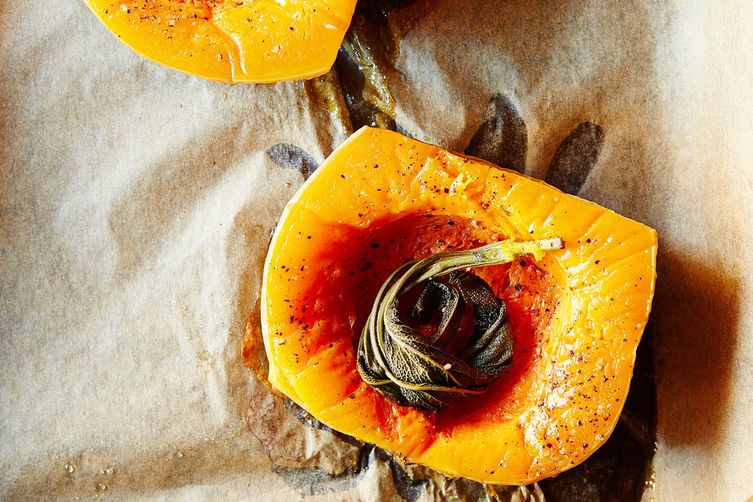 The recipe proceeds in a similar fashion -- precise, but no single step asking much more of you than paying attention. Vegetables are sautéed and simmered in a couple of stages, then puréed and strained.

Someone in the Food52 test kitchen asked why you pass the purée through a fine strainer, and my answer, a little too quick and cheeky, was "It's a Thomas Keller recipe." But really, it's because it's justified in outcome. Straining out the rough matter clarifies the soup in both texture and flavor -- what's left behind is dull-tasting and scraggly by comparison, the resulting soup its purer, brighter form. 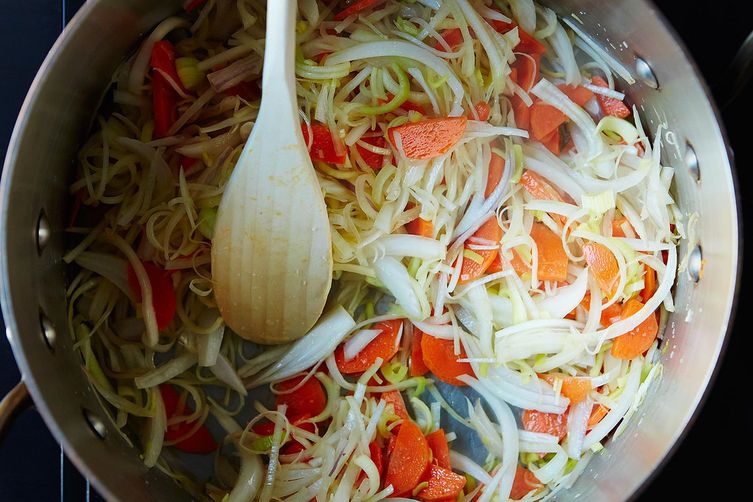 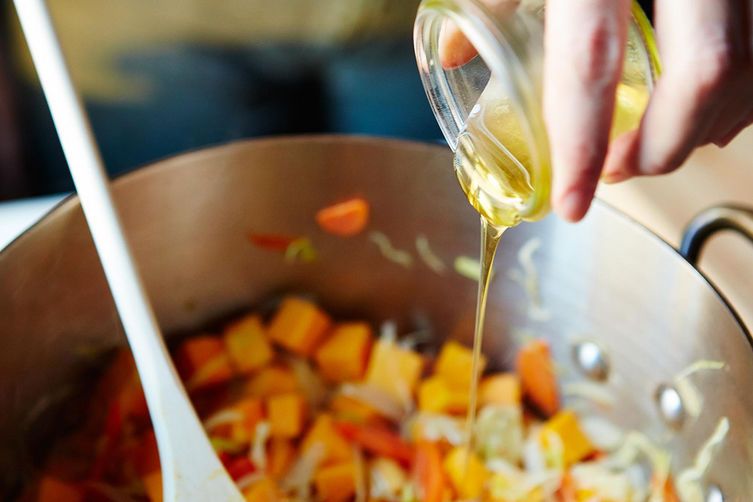 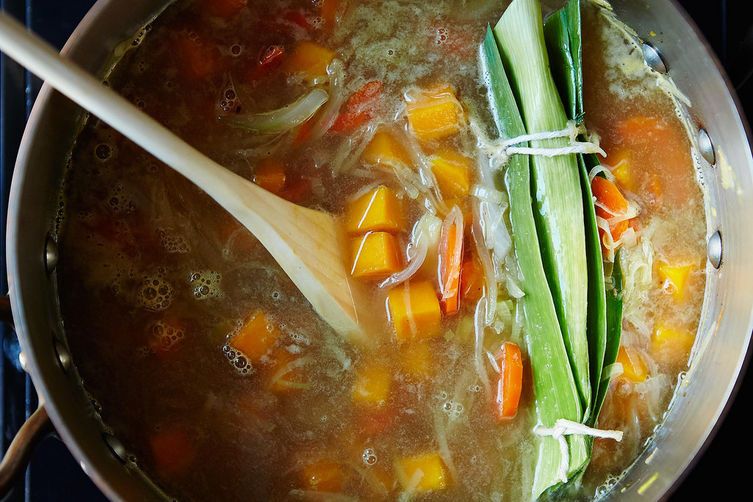 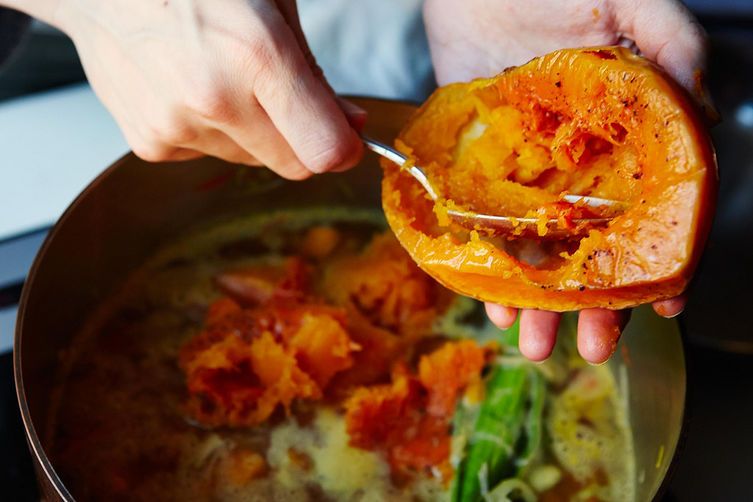 At the very end, Keller pours a sputtering pan of browning butter into the otherwise finished soup. Brown butter can do mystical things -- making sliced tomatoes taste like lobster and fresh raspberries like pie. It won't stay pooled on top of the soup, but swirl in like cream would -- with a different sort of richness, nuttier and more deeply flavored. "You may take shortcuts the next time around," Amanda wrote nearly ten years ago in the New York Times, "But you won't skip this step."

More: Look! It's Amanda dressed up as Thomas Keller. 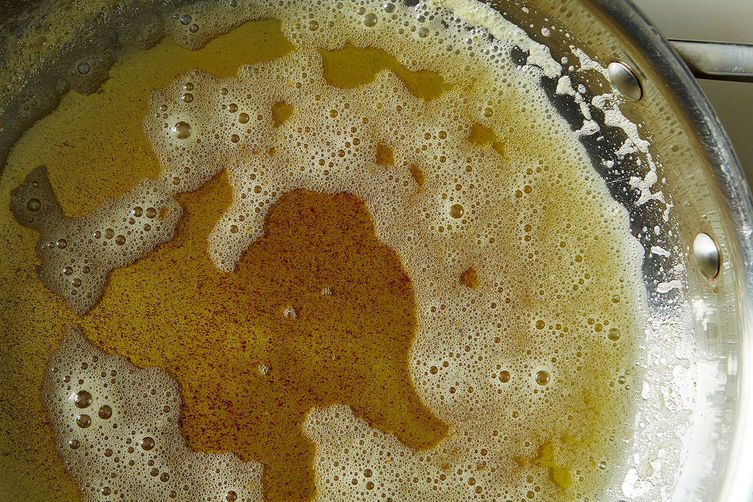 The soup is served with a profusion of garnishes that might seem like just a flashy way to impress your relatives -- like an unconventional centerpiece or a stack of tastefully-wrapped presents -- but each topping is as intentional as the rest of the recipe: Black pepper, chives, and olive oil each play off the soup in their own way, and the nutmeg crème fraîche does them one better. When a little blob of it melts in the hot soup, the scent of nutmeg is unleashed as the tart cream swirls in. 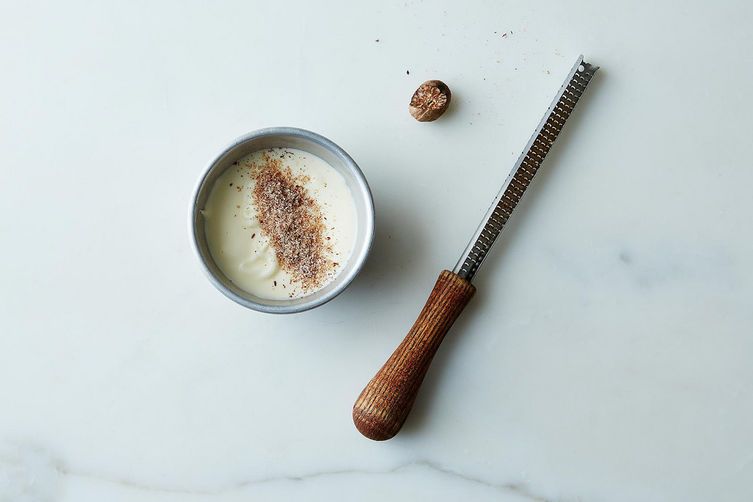 Like any good Keller recipe, it will also give you ideas for the next time you cook. You might tuck a sage leaf or a thyme sprig or wedge of lime into the belly of your squash, just like you would a roast chicken. Or stir cinnamon into your crème fraîche before plopping it on your apple crisp, or lime zest and cumin into your sour cream before putting it on black bean soup, or a scrape of vanilla bean into your mascarpone before it hits your French toast.

And the next time you taste your soup and think it falls flat, you won't just grab the cream, or sriracha, or salt. You'll make it better, and a lot more memorable, with a slip of brown butter, the best secret ingredient of all.

Vivian January 24, 2015
I just made this soup and it's delicious! So smooth and flavorful. I even made the fried sage garnish but it would be just as good with the chives! Will definitely make it again.

AlainaMK January 12, 2015
This soup is indeed delicious. As forewarned, there are some additional steps and ingredients to this recipe, but all are well worth the time. I skipped the fried sage and opted for the less-messy minced chives--ignorance is bliss, I guess, because the soup was fantastic. I made 6-8 servings for 2 of us...we've been eating it for three days and I'm not sick of it yet. Lovely soup, perfect for a cold day, and I'm sure a beautiful dish to serve on a holiday.

karmaya December 17, 2014
this sounds even better than the parmesan pumpkin soup i make every thanksgiving. i'm going to try it this week - using all 5 varieties of allium (not just 4 as you wrote) lol.
Author Comment

Mike S. December 9, 2014
Just made this last night, and it's officially one of my favorite soups now. Warming, hearty, and surprisingly rich, I couldn't stop sniffing at it the entire time it was cooking. (Watch out for errors in the recipe!)
Author Comment

Kristen M. December 9, 2014
So glad you liked it! Did you mean that there are errors in the recipe as written? Let me know, as I'd like to fix them (just updated the sage leaf amount to work for 6 bowls of soup, but that's the only issue I noticed).

Mike S. December 10, 2014
First of all, I feel kind of famous to be engaged in conversation with Kristen Miglore! Secondly, I truly have to apologize. I really was convinced there was an error in steps 5 and 6 because I misread the two different times I was supposed to add the squash (I actually just diced the whole squash and roasted it like that). So please accept my apologies for falsely accusing you. Mea culpa! This soup is just amazing.
Author Comment

Kristen M. December 11, 2014
I think I was so surprised to be considered famous that I lost this notification email in my inbox. This recipe isn't the easiest to follow, so I don't blame you for getting lost in it -- I have too! Thanks so much, and glad you're a fan of the recipe.

Scribbles December 7, 2014
Bouchon, the restaurant(s) and the cookbook are fabulous! I'd forgotten about this wonderful soup so I had to dig out my cookbook and look it up - mainly so I could browse the pictures and remember, lovingly, the amazing food Chef Keller presents.

Dana V. December 7, 2014
Where did you get that wood handled rasp!?
Author Comment

Kristen M. December 8, 2014
I think it's a vintage rasp we nabbed from Amanda's -- probably a family heirloom or from an antique shop. If you look on etsy or eBay (or in second-hand shops near you), you might be able to find something similar!

Rémy R. December 3, 2014
"I once -- emphatically once -- made his boeuf bourguignon, which necessitated the use of a spreadsheet, ended at 3 AM, and was what I imagine running a Tough Mudder might be like."
YOU ARE SO WONDERFUL.
Author Comment