Watercress and Our 10 Favorite Ways to Use It

Today: The delicate green with a not-so-delicate flavor. 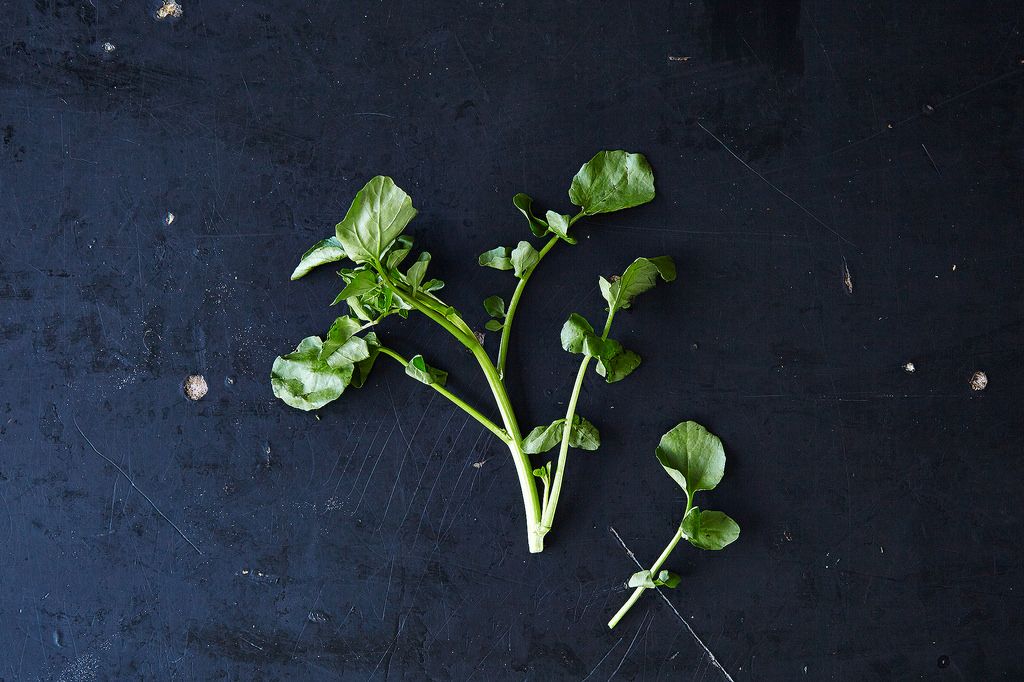 Watercress is one of the oldest leafy greens consumed by humans, and like so many other vegetables, it has had its fair share of purported benefits throughout the years. In 75 Exceptional Herbs, Jack Staub says that the vitamin and nutrient content of watercress and other cresses meant that, historically, they were thought to boost brain power—hence an ancient Greek proverb urging to “eat cress, and learn more wit.” But perhaps the best claim comes from Francis Bacon at the turn of the seventeenth century. The English philosopher and scientist said: “The eating of watercress doth restore the wanted bloom to the cheeks of old-young ladies.” What's next? An anti-aging cream with watercress extract?

As its name suggests, watercress is an aquatic (or semi-aquatic) member of the Brassicaceae family. And like other family members with a bite (think arugula, wasabi, and horseradish), watercress’s delicate leafy greens pack a peppery punch. As Deborah Madison notes, “This is hardly a timid family.” 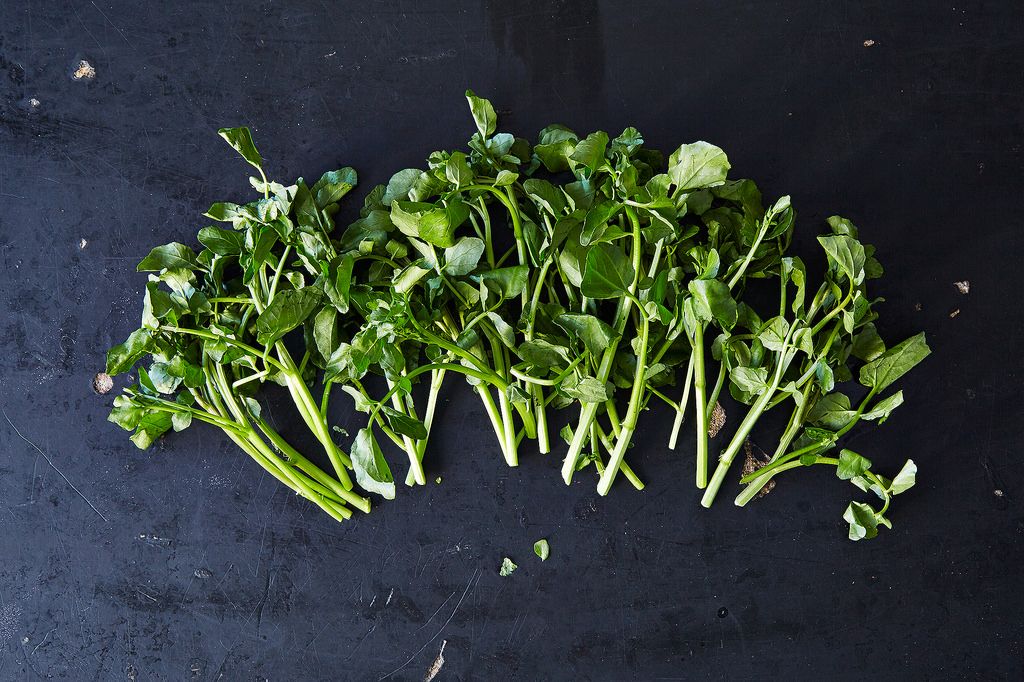 You should be able to find rubber-banded bunches of watercress in a well-stocked grocery store year-round. You’ll likely have to hang tight for a few more weeks until you can pick it up at your farmers market, though. But when the time arrives, and if you’re lucky, you might also find some vendors offering small-leaved wild watercress. Deborah Madison says: “When that happens, it’s a shame to do anything with it but eat it as a salad.”

A taste of wild watercress from the farmers market might have you hooked. If you get the urge to start foraging, resist it: It’s best to leave the procuring of wild watercress to the experts. Author and food critic Florence Fabricant shares a lesson learned from Andy Brown, a partner at B&W Quality Growers, the world’s largest grower of watercress: “Eating wild watercress can be as risky as nibbling a foraged mushroom. It’s not the watercress, he said; it’s the environment. To be safe, the plants, which actually grow in water, must be right at the source of a spring before it can be contaminated by parasites carried by tiny snails or livestock or other animals. In some areas, wild cress may also absorb high levels of heavy metals, like copper.” Note that this caution applies to foraging for wild watercress, not to the watercress you buy in a store.

More: Learn more about where the wild foods are—and what to do with them.

You might also come across the related land cress (also called upland cress, among other names). It makes a fine substitute for watercress and, depending on your penchant for a spicy bite, it might be a better choice for some applications. Deborah Madison notes: “Land cresses, and there are a number of them, are far more peppery than the now rather tame hydroponically grown watercress that one buys, its roots still intact and much of its fire put out.” 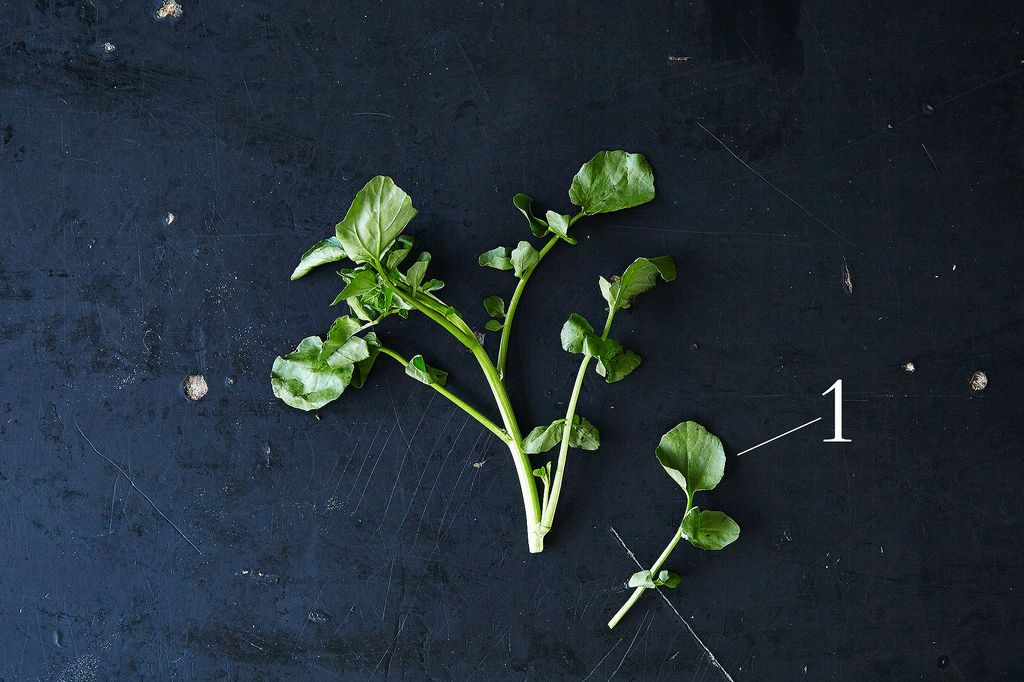 Most watercress that you pick up at the grocery store will have large, round leaves (1). Look for dark green, perky bunches of watercress, and avoid any that are yellowing, wilting, or slimy.

To store watercress, treat it like a soft-stemmed herb (like parsley, cilantro, and basil) and store it in the fridge in a jar of water loosely covered in plastic. When you're ready to use it, you’ll most likely want to cut off the tough part of the stem (2, below), leaving only the tender stems. (If you’ll be stir-frying the watercress, it's fine to leave them as is.) 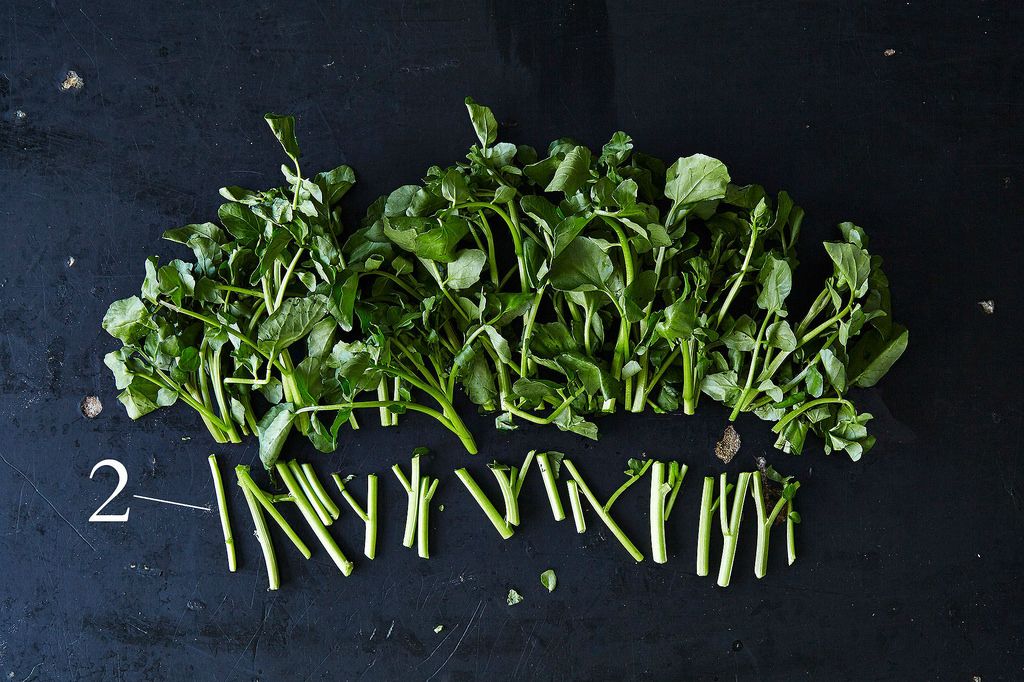 Watercress is a versatile little vegetable: You can use it anywhere you'd use an assertive green, or you can treat it more like a herb. Here are 10 ideas to get you started:

Tell us: How do you like to use watercress?

connie M. August 7, 2016
I have been making watercress soup and watercress/pear soup since the early 80's. Back then it was so difficult to find. Now you can find it bagged anywhere. I still prefer to get it fresh from the organic market when I can get there. I rarely leave enough of the first soup for my husband to taste. The one with pear is his favorite. I use it on sandwiches instead of lettuce and, of course, little teatime watercress sandwiches.

nola2chi April 5, 2015
For me, watercress is both the green and the goddess. Green goddess dressing in a pasta salad is a delight.

Beaulaker April 5, 2015
piled high in a sandwich on white bread with mayonnaise

YenWhite April 5, 2015
a simple saute with chopped garlic and a dash of fish sauce tames its bite and transforms it into a savoury side.

Meaghan F. April 4, 2015
Yay! So timely, I planted cress seeds on a whim this year and they're just starting to sprout. I've never cooked with it before and now I'll have plenty of ideas.

rachiti April 6, 2015
Cress and Watercress are not the same vegetable. They have a similar peppery 'bite' to them. My husband is from the UK - over there cress is used like alfalfa sprouts -as a sandwich filler. Their growth rate and harvest times are also rather different. Good luck with your cress project. I hope it's delicious however you choose to use it.

amysarah April 4, 2015
Maybe not anti-aging face cream, but how about 'anti-aging' bone benefits? Watercress (like kale, collards, etc.) is one of the highest plant based calcium sources. Beyond a certain age (ahem), women need a whole lot of calcium to prevent osteoporosis...and there's only so much dairy I can consume in a day. (Watercress is very good in a Chinese stir fry, btw.)

mrslarkin April 4, 2015
I love it, too! Great as a salad with some poached salmon.