The Unsung Ingredients of the Sea

Sea vegetables, or what most folks call seaweed, are an entire category of edible kelp and algae products. While they commonly hide in many processed foods, including toothpaste, they deserve a lot more attention than that. You could call them Mother Nature’s multi-vitamin, since they back an all-star list of nutrients and minerals. They’re also culinary chameleons. 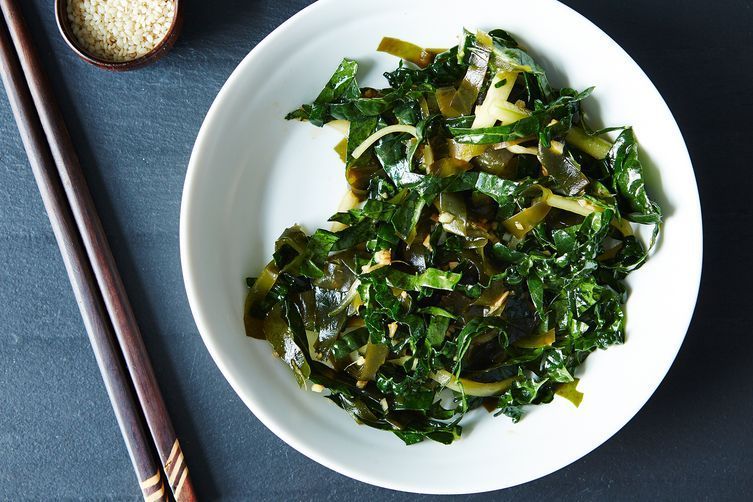 They range in flavor, from mildly sweet to slightly bitter or briny, adding a salty kick without an overload of sodium. They come filled with natural umami. And while most come dried, the texture is easy to alter through frying, toasting, and soaking—meaning one day, they can act like slippery noodles and the next, they crunch like a chip. Just note: Over time, exposure to moisture will zap out flavor and texture. So place dried sea vegetables in an airtight container or sealed package in a dark, room temperature part of the kitchen and they’ll keep for two years. Once rehydrated, drain out any liquid, place in a container, and refrigerate for 3 to 4 days.

Let this post guide you through the wide range of sea vegetables—including nori, kombu, wakame, dulse, arame, hijiki, and agar agar—and show you how to make them a part of everyday cooking and a permanent part of your pantry. After all, these days, a range of sea vegetable products line the shelves at Asian markets, health food stores, and even most big grocers. 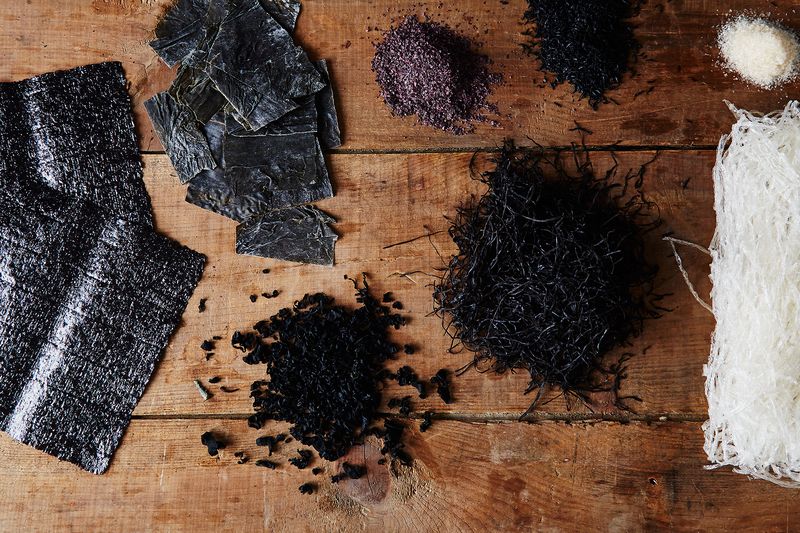 Probably the most common of the sea vegetable family, nori refers to the paper thin, dark green sheets that wrap around your spicy tuna rolls. They have a mild, earthy flavor and come packaged both in large sheets as well as nifty little snacking squares. When ground, nori can be found in spice blends like furikake or Shichimi Togarashi.

How to use it: You can use the larger sheets straight from the package or toast them quickly over an open flame to give them crunch. Yes, you can always make homemade sushi or onigiri, but think beyond the rice and the roll and cut sheets into confetti-like strips to sprinkle over avocado toast or cabbage salad. Use smaller squares instead of chips for your next batch of guacamole or ceviche. Or grind it with sesame seeds to crust your next sirloin steak. Just note that when added to liquid or cooked, nori sheets dissolve quickly.

For those new to sea vegetables, start with arame. It comes dried and shredded into thread-like strands, perfect for sprinkling. It is mild in flavor as well as on the sweeter side of the sea vegetable scale, making it easy to pair with other ingredients. And even after being rehydrated, it retains a good texture.

How to use it: Arame requires a 5 to 10 minute soak before use and usually a quick boil if tossing into salad. But after it rehydrates, drain the arame of liquid and then add strands directly to stir fries, chopped up in a fish cake batter, or these Golden Panko Latkes. And be sure to put its dark hue in play by mixing with fall and winter squash or in a holiday stuffing. Do note that arame will double in size when cooked. 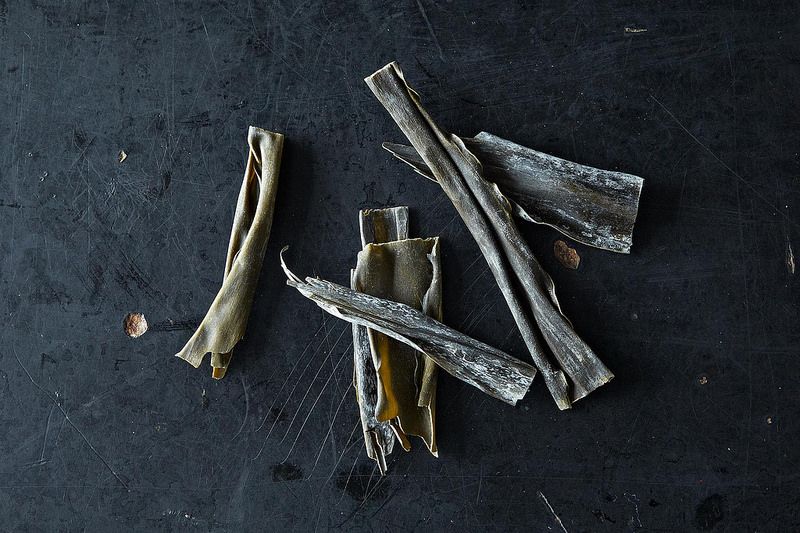 If you’ve ever enjoyed dashi—a traditional Japanese broth—you’ve tasted the deep, savory flavor of kombu. Beef jerky-like in looks, kombu most commonly comes in large, dried chunks that are typically too tough to eat raw (but in some markets, you may find them pickled in jars). Like most sea vegetables, kombu is naturally full of glutamic acid (a.k.a. umami).

How to use it: Take advantage of kombu’s tenderizing power and add it to your next batch of braised cabbage or kabocha squash. Up the umami factor by using it in a tomato soup or a meat stew; as the base for vegetarian ramen and soba broth; or to make a “break the Internet”-level pulled pork. Just be sure to remove kombu before serving. And if adding straight to liquid, there is no need to soak it first.

Wakame looks the most like the ribbony seaweed found in the sea. It is traditionally used in seaweed salad (sunomono) and miso soup. It usually requires soaking before use. But after a quick dip, it takes on a silky texture, emerald green color, and a mildly sweet taste.

How to use it: Once rehydrated, mix the pappardelle-like wakame into a seafood pasta or Vietnamese noodle salad. Add to pesto or artichoke dip. Or use like sautéed spinach in a creamy casserole, tofu breakfast scramble, or miso-creamed kale. 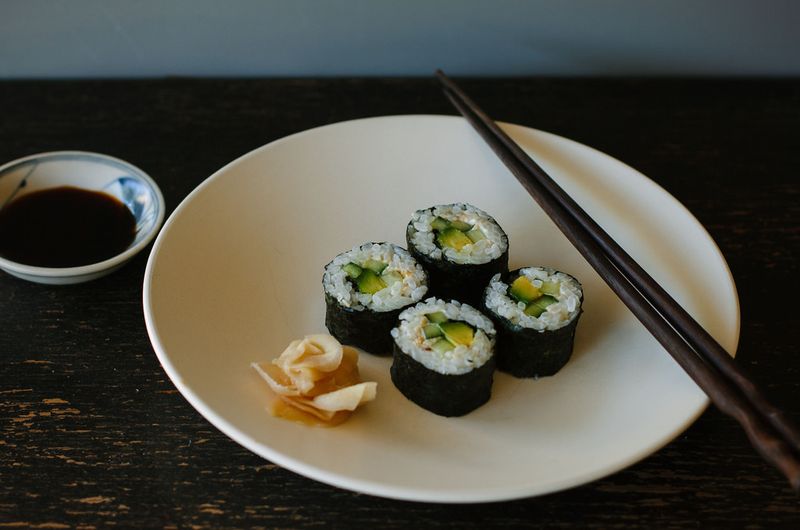 Also called sea lettuce flakes, the crimson-colored dulse tastes fruity, tangy, and salty. It’s packaged both as whole leaves or in flakes. When eaten raw, it is soft and slightly chewy in texture. And some say, when fried, it gives off a bacon-like aroma.

How to use it: Enjoy the dulse leaves straight from the package. Crisp them up with a quick fry and then crumble like bacon bits on top of a tomato salad, chowder, or a batch of wonder fries. Grind into a paste and use in place of sardines for Caesar dressing. Or add to overnight miso porridge for a savory take on breakfast. 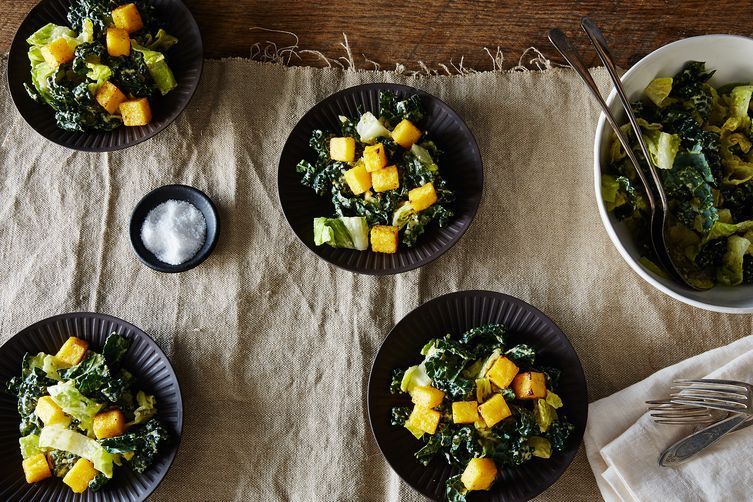 Hijiki (or hiziki) is similar to arame in looks, flavor, and culinary usage, but what sets hijiki apart is its strong, licorice taste.

How to use it: It requires a soaking period and sometimes boiling before use, so read the directions on the package and cook accordingly. Like arame, hijiki will grow four to five times its size when cooked. When it’s ready, use in place of fennel for this creamy celery soup, this flatbread, or this meatloaf.

These little white flakes act as a natural gelatin and thickener, making it a favorite of vegan cooks and dessert lovers alike. Agar agar is both tasteless and colorless when rehydrated, and it dissolves in water at room temperature. Be aware that any citrus will undo its gelling powers.

How to use it: Swap agar agar one-for-one in any recipe that calls for powder gelatin, like fluff and gelees and, yes, jelly. Agar agar can also replace eggs in most cakes and breads—or egg whites in whipped cream and pavlovas. It can also make this matcha-white chocolate mousse. 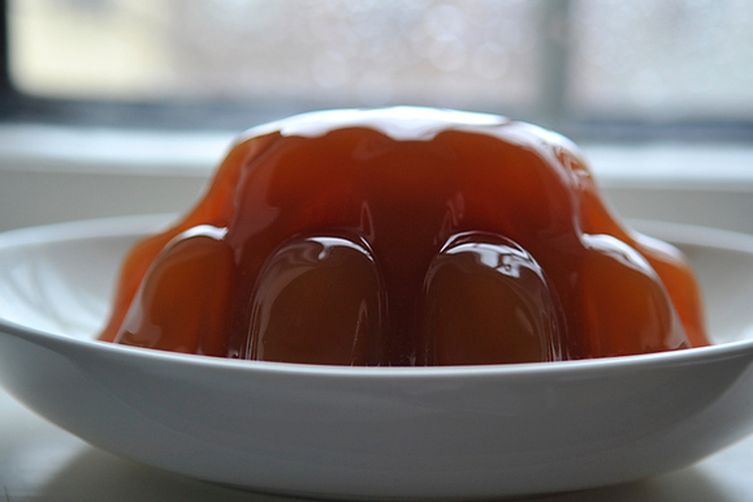 sodiumgirl.com
In January of 2004, I received a diagnosis that changed my life. I was diagnosed with Lupus, an autoimmune disease that in my case attacked my kidneys and brain. Due to the intensity of the initial “flare up” of the disease, I became renal insufficient and eventually faced kidney failure. Amazingly, through great medicine, wonderful family and friends, and an enormous amount of support, I became stronger and healthier and miraculously, my kidneys partially regenerated. I no longer depend on dialysis and by regulating my diet, I depend on fewer medications. Five years later, I work part time and live a full and utterly enjoyable life. My dietary restrictions have transformed into a real passion for food and I hope to be able to pass along my favorite finds to others facing similar dietary challenges. Be creative, be friendly, and be full!

Laura W. February 20, 2017
a mix of Dulse flakes, sea salt and sesame seeds lightly hand crushed together makes a lovely condiment called Gomasio...you can buy it in stores but it's super easy to make your own...use black and white sesame seeds for a pretty contrast

Jona @. April 11, 2016
Found this article very helpful, since just started to experiment with sea vegetables. I love Nori and have been using it as a snack for years, and especially love the fried snack found around Singapore. I am experimenting with wakame and immediately fell in love. I used it in a very simple chicken broth soup and it completely amplified the flavor. Gonna try Kombu and Agar Agar next :)

Betsey October 14, 2015
I had sea beans at The Ocean Room once. Do those count as vegetables from the sea?

Lindsay-Jean H. November 2, 2015
Sea beans are a succulent, not a seaweed, but they do pair well with a lot of the same foods. Here's a bit more about them: https://food52.com/blog/6985-sea-beans-the-salty-succulent