Today we're taking a nose dive into the salad bowl with a half-dozen varieties of dark leafy greens. These plants come from a few different plant families -- arugula, kale, and collards are Brassicas, spinach and chard are in the Amaranth family, and dandelion is from the family Asteraceae -- but they share certain essential characteristics in the kitchen: all can be enjoyed raw or cooked, and they're all hardier than the fragile salad greens of spring. 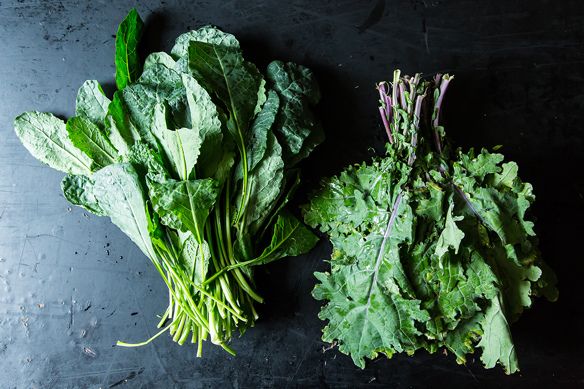 1. Kale: Kale has enjoyed a popular renaissance in the past few years, with cookbooks, tshirts, and more dedicated to the plant. Hearty, mild, and nutritious, kale is just as good sautéed as it is raw in a salad. (The realization that massaging vinaigrette into kale leaves wilts and tenderizes them revolutionized kale salads forever.) There are three types of kale, all equally interchangeable in recipes: curly kale, which is the most commonly available variety, and the two harder-to-find types shown below: 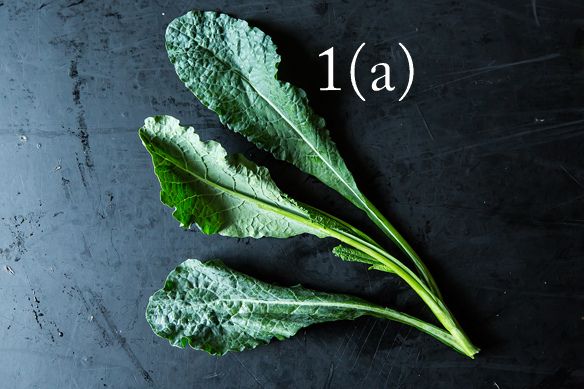 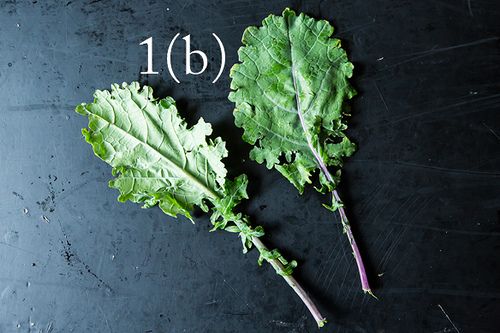 1(a). Lacinato kale, also called Tuscan or Dinosaur kale. Our senior editor Kristen describes its leaves as "dark, like beveled glass." Cavolo Nero is the name of a particularly dark-leaved variety of lacinato kale.
1(b). Russian kale, also called Winter kale. The purple accents that you sometimes see in curly kale are even more apparent in this variety. 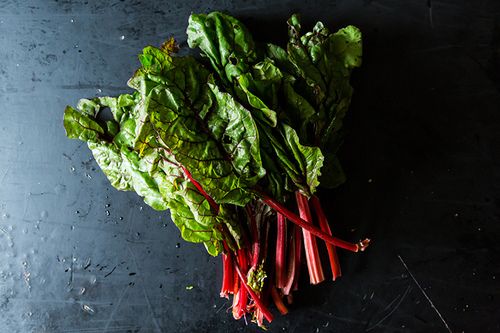 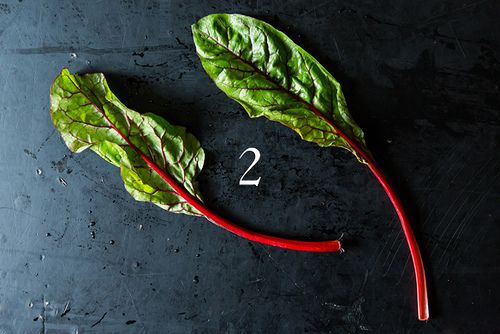 2. Swiss Chard: Chard and beets are very close cousins, the difference being that the former is cultivated for its leaves while the latter is grown for its roots. (Chard leaves even look like beet leaves, but larger and better-developed.) Pleasantly tender with crunchy, edible stems (don't toss them!) and a mineral-y, slightly bitter taste, chard can be eaten both raw and cooked. Depending on the variety, the stems can be pink, red, orange, or white -- "rainbow chard" seed packets are actually just a mix of the different varieties. And why "Swiss," when the green originated in Italy? It's in honor of the Swiss botanist W.D.J. Koch, who gave the plant its scientific name. 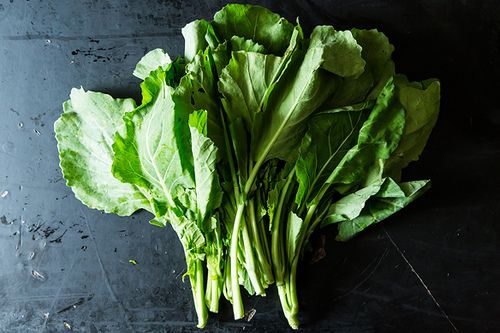 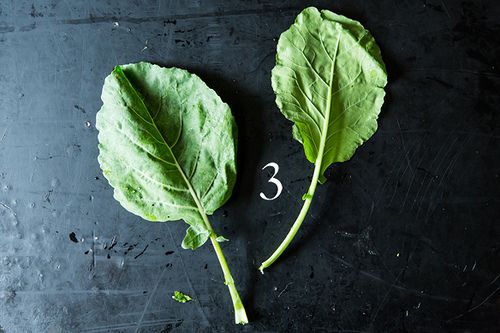 3. Collards: Did you ever think about how collards are basically flattened cabbage leaves? The two are very close cousins -- in fact, the name "collard" is descended from colewort, a loosely-headed cabbage variety grown in the Middle Ages. Today, you'll find them in cuisines all over the world, from South America to Eastern Europe to the American South. (And a brief history lesson: collards aren't indigenous to Africa, but that signature long-simmered cooking method was brought over by African slaves in the 1800s.) Collards' sturdy leaves stand up to braises, richly flavored soups, and even raw wraps, but they're great steamed or sauteed just until bright green, too. 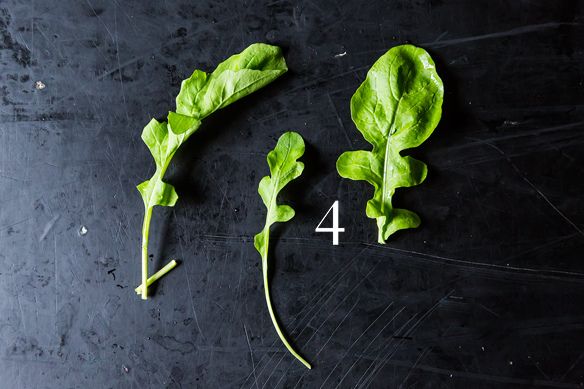 4. Arugula: The target of many a joke about crunchy liberals, peppery, spicy arugula ("rocket" in the UK) is the quintessential spicy green. It has been around since Roman times (Virgil mentions arugula in Moretum, a short poem about a farmer preparing a meal!); today, you'll find it in many traditional southern Italian dishes. Arugula is perfect for amateur gardeners -- to go from seed to salad takes just 6-8 weeks, and the plants actually prefer sandy soil and hot temperatures. The spicy heat of arugula is a good contrast to the bitter flavors of other greens, making it a great addition to any salad mix. You can sometimes find bunches of "bolted" arugula, harvested from plants that have gone to seed, at farmers' market -- save these for sautés, where their extra-peppery, tougher leaves will shine. 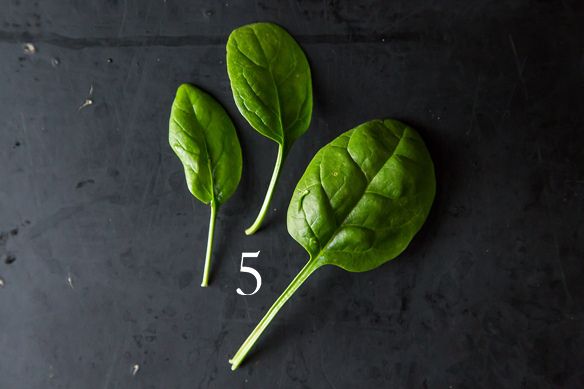 5. Spinach: You can't really blame the children of yesteryear for not eating their vegetables: unless you're Popeye, blanched spinach in a can is nothing to write home about. It wasn't until the 1980s that vacuum-sealed bags of fresh spinach became widely available, ushering in a new era of salads (90s-era raspberry vinaigrette, anyone?) and changing the way we eat our greens. The most popular cultivar of spinach is Savoy, which produces crinkly leaves that are hardy enough to stand up to being bagged and transported. The bagged baby spinach you buy in stores is grown from flat-leaf spinach seeds, which have a much milder flavor. If your experience with spinach is limited to those smooth-skinned baby greens, you owe it to yourself to buy a bundle of wrinkly, fully-mature spinach, preferably with the roots still attached -- since spinach is a fast-growing, annual plant, many farmers sell the plant whole since the attached roots help them last longer. The deeper, more complex flavor of these leaves is the perfect match for the spices in Indian saag paneer or Iranian yogurt dip. 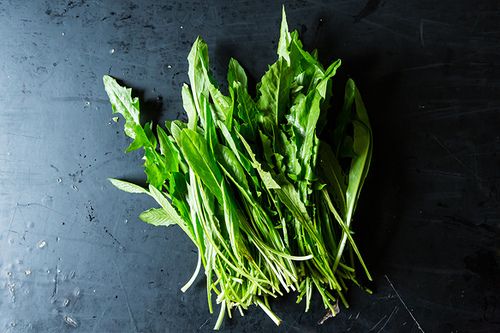 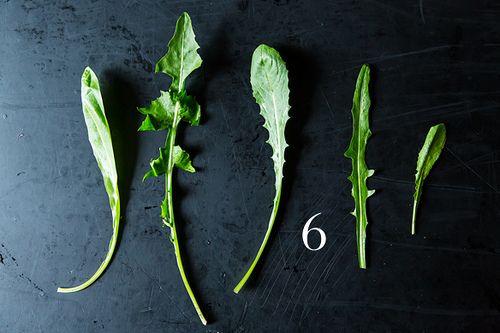 6. Dandelion: While the weeds in your neighbor's yard are probably sprayed with pesticides, the dandelion greens you find at market are perfectly edible. Dandelions are actually an invasive species, brought to North America by Puritans who used the plants for their medicinal value (high in potassium and vitamins A, B, and C, they were used as a cure for jaundice and hepatitis). As invasive species go, dandelion is fairly innocuous -- though it's the bane of homeowners with gorgeous lawns, it doesn't compete with local plants or damage local animal populations. In the kitchen, dandelion greens pair well with a sharp, fatty dressing to cut their bitter bite, or you can saute them as you would escarole or endive. And if you can get your hands on yellow dandelion flowers, they can be steeped and fermented into dandelion wine with a whopping 10% alcohol content! (Little-known fact: a section about dandelions I wrote for an article in Lucky Peach about invasive species was cut for length. I know a lot about dandelions)

All of these plants are wonderful candidates for your home garden. They can withstand a bit of cold, they reach maturity quickly, and they keep on giving all season, growing new leaves in place of the ones that you harvest. It's winter now, but don't mind the cold weather -- they all grow beautifully in greenhouses.

lazychef December 9, 2012
Just a note about arugula - it actually is better planted in cooler temperatures. Hot weather causes it to bolt and flower, and stop producing leaves. So plant in early spring or late summer for a fall crop.
Author Comment

Nozlee S. December 9, 2012
I've found that if you harvest its leaves regularly, causing them to grow back instead of bolting (although they'll get a little spicier with each regrowth), arugula provides a great summer crop! But part of its appeal is how well it does in all seasons.

lazychef December 9, 2012
It definitely depends on your climate. Here in DC, it's so hot that June is more or less your cut-off.

Panfusine December 7, 2012
just wondering, Where does Mustard greens fit into this set.. I just picked up some gorgeous curly mustard yesterday.
Author Comment

Nozlee S. December 8, 2012
You're right -- we couldn't include everything! Mustard greens are brassicas in the same family as kale and cabbage, but they have a much more pungent horseradish-y flavor.

Panfusine December 8, 2012
Mustard greens tend to fall into that odd seasonal category anyways, they've never been as mainstream as spinach or kale..I'd love to learn more about recipes that use mustard greens , other than the standard 'Sarson ka saag'