What to Do With Crunchy, Sweet & Spicy Bell Peppers

You picked so many peppers, you should be called Peter Piper. Learn how to use them, starting with Yotam Ottolenghi's marinated pepper salad.

It's the season of overflowing market bags, heavy CSA boxes, and gardens run amok. Alexandra Stafford of Alexandra Cooks is showing us how to store, prep, and make the most of the bounty, without wasting a scrap.

Today: How to store, prep, and make the most of the season's pepper crop, whether you have just a handful or you picked so many you should be called Peter Piper. Start with Yotam Ottolenghi's marinated pepper salad. 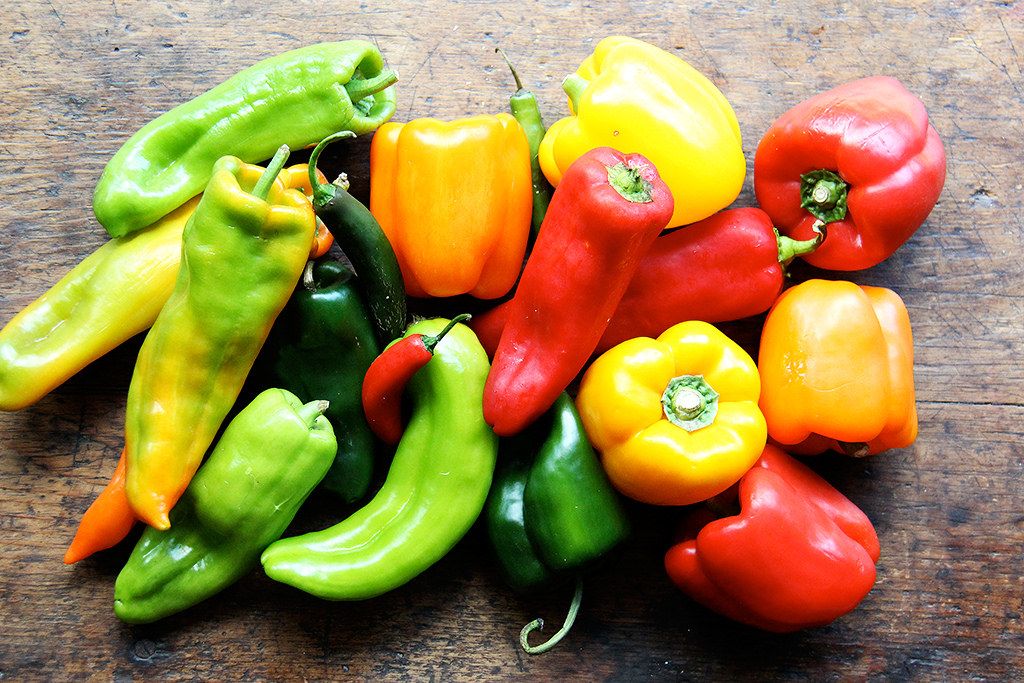 If only by the end of summer we as cooks and gardeners felt burdened by our pepper crop; found ourselves dumping our bounty on neighbors' front doors; bemoaned yet another dinner of chiles rellenos.

Imagine if we faced a wealth of glossy—red!—peppers every time we walked out to those raised beds. If only so many of us were not still waiting for our green-fruit laden plants to show any signs of ripening.

We can dream, but the good news is that Yotam Ottolenghi has come to the rescue. With just two peppers and a few other ingredients—fresh basil, capers, mixed greens, and shaved Pecorino—the master of vegetarian cooking has crafted a late-summer salad filled with texture and flavor. And despite the presence of a few strong characters (capers, Pecorino), the flavor of the peppers permeates every bite.

More: Got a jar full of capers? Use them for a week's worth of dinners.

The trick is that the roasted peppers marinate for at least an hour in a mix of olive oil, balsamic, garlic, and thyme. During this time, the peppers not only absorb these flavors, but also infuse a smoky sweetness into the marinade, which ultimately becomes the dressing for the salad.

These roasted peppers can be used in countless ways, most simply with a loaf of crusty bread and a wedge of cheese. But the salad—made with nearly equal parts herbs to greens, and laced with slivers of red, pops of green, and stark white cheese shavings throughout—is stunning. And (with or without a bumper crop of peppers) can be on your table tonight. 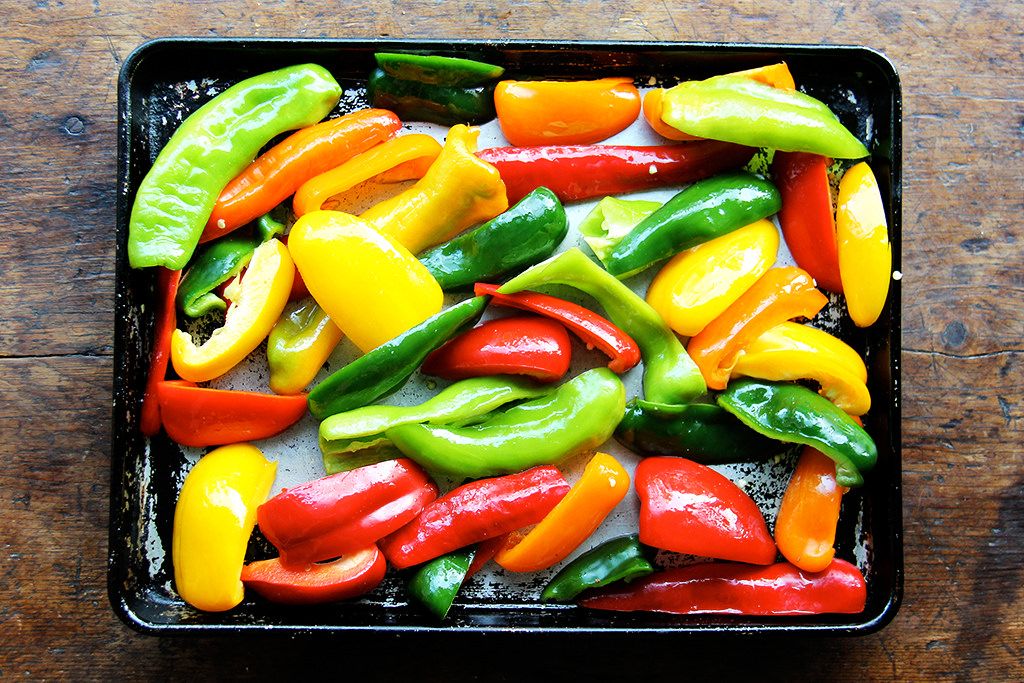 How to Store Peppers 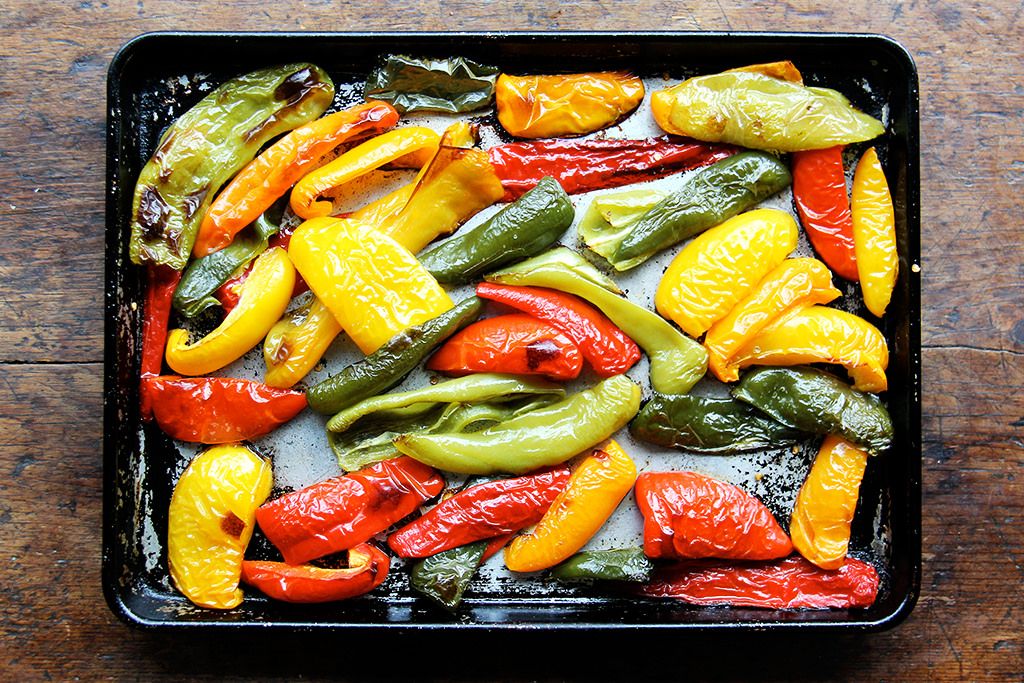 How to Prep Peppers: 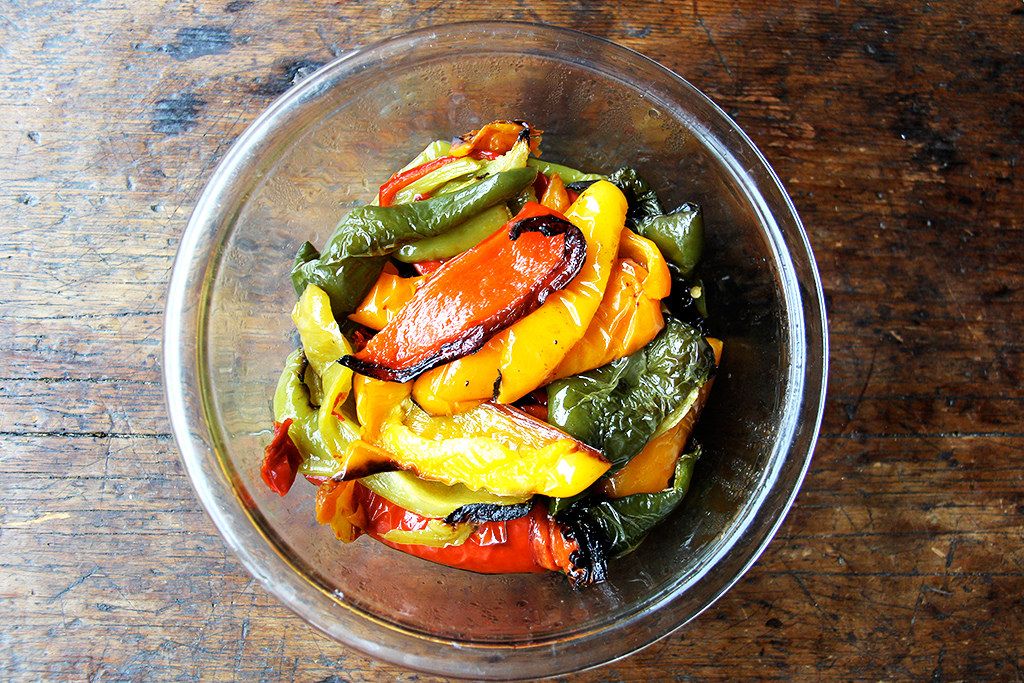 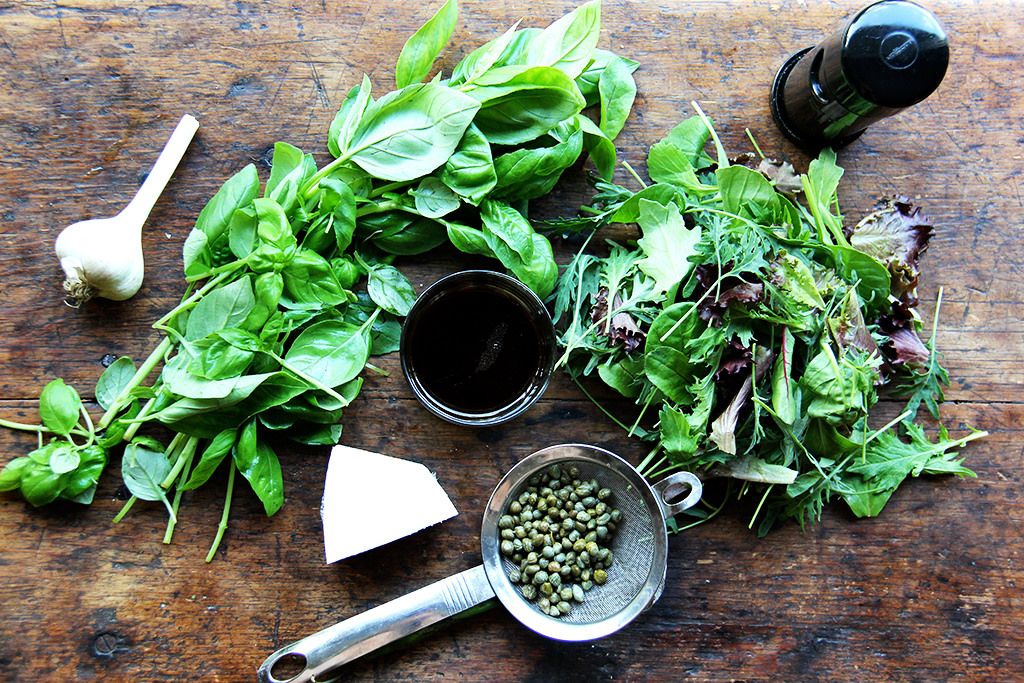 More: Turn your roasted red peppers into a sweet condiment. 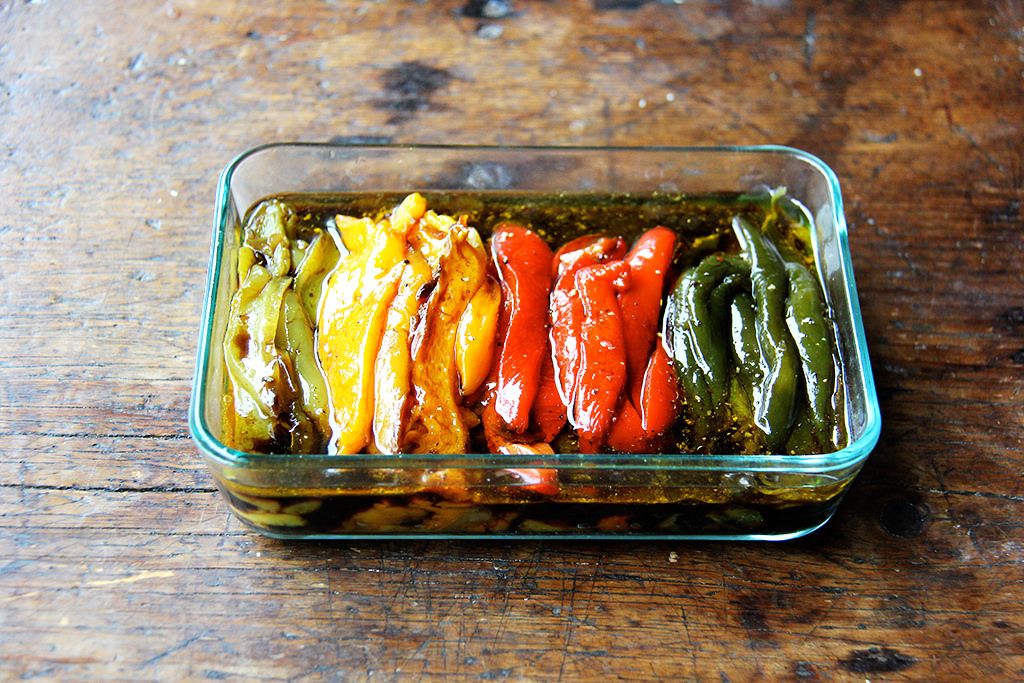 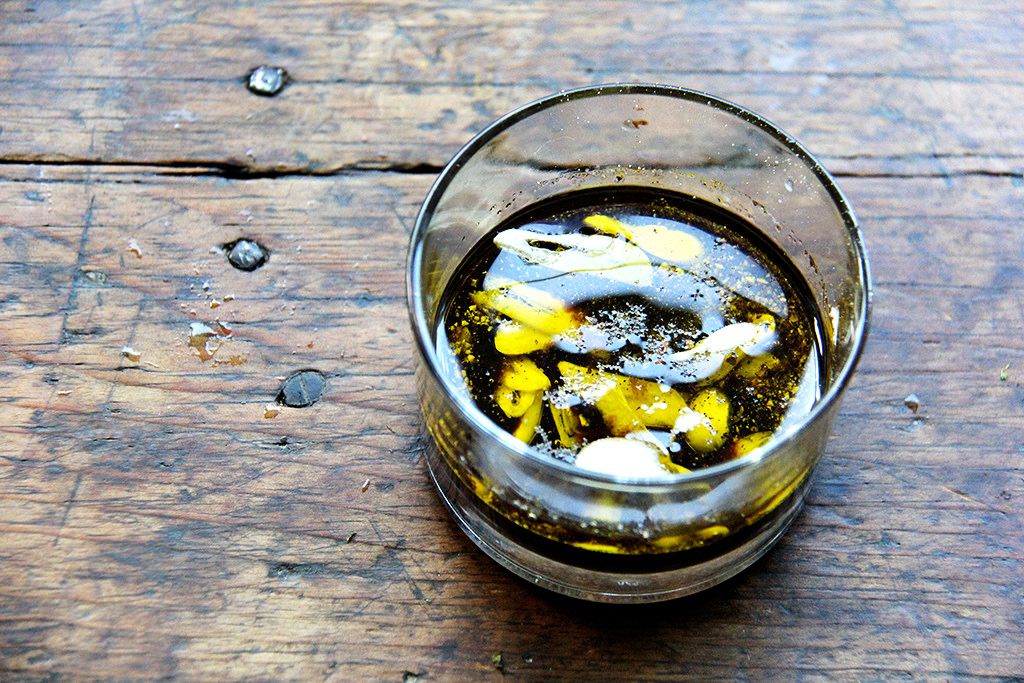 Additional Recommendations From The Editors: 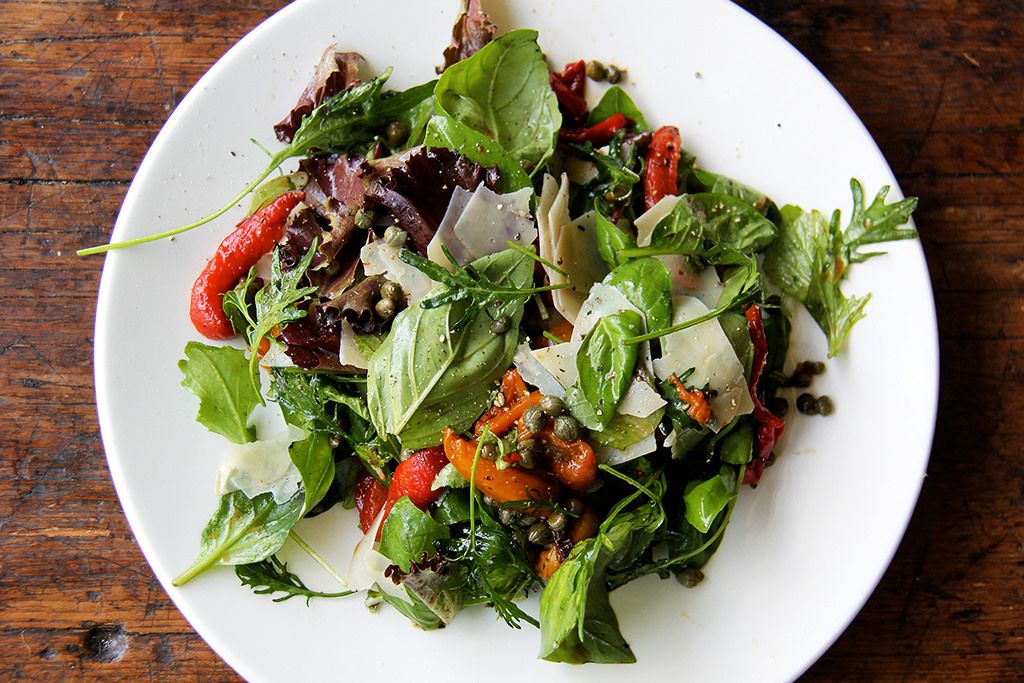 As mentioned earlier, this packed-with-flavor salad from Yotam Ottolenghi's cookbook Plenty makes for a simple light lunch or bright side dish—but we think it’d be a pretty fantastic meal if you stirred in some pasta. Speaking of pasta, Food52 Resident Meryl Feinstein of Pasta Social Club makes roasted red peppers craveable (she’ll show you how to make your own, but if you have a jar on hand, why not use them?) in this creamy, smoky, totally vegetarian dinner. It can be tough to find shishito peppers at certain grocery stores, and even at the farmers market when out of season—luckily, Michele Humes has a supermarket staple-based solution, in the form of these genius shishito-style green peppers.  “Green bell peppers, snipped off the vine before ripening into red or yellow sweetness, get the least love of all the bell peppers. It’s true that they can be mushy and bitter, but only if cooked too low and slow, writes Humes in her cookbook The Noodle Soup Oracle. “The key is a screaming-hot, well-oiled wok and just enough time in it that the skin blackens and blisters. Prepared this way, green pepper wedges remind me of stemless, seedless shishitos. In this recipe, a flicker of heat from the shichimi togarashi and a shower of flaky salt drive the comparison home.” But if you can find shishitos (and we recommend buying a lot, because they’re as easy to eat as potato chips), here’s how to prep them: Smoking-hot oil in a pan filled (but not overcrowded with) shishito peppers, blistered, salted with abandon (flaky salt, duh!), and finished with a good squeeze of fresh lime juice. "This North African vegetable relish cooks tomatoes, bell peppers, and eggplants together to make a jammy, flavorful spread that is perfect served on top of roasted chicken, fish, meat, or veggies," writes recipe developer Leah Koening. "It tastes equally great served as part of a mezze selection, alongside grilled pita for dipping." 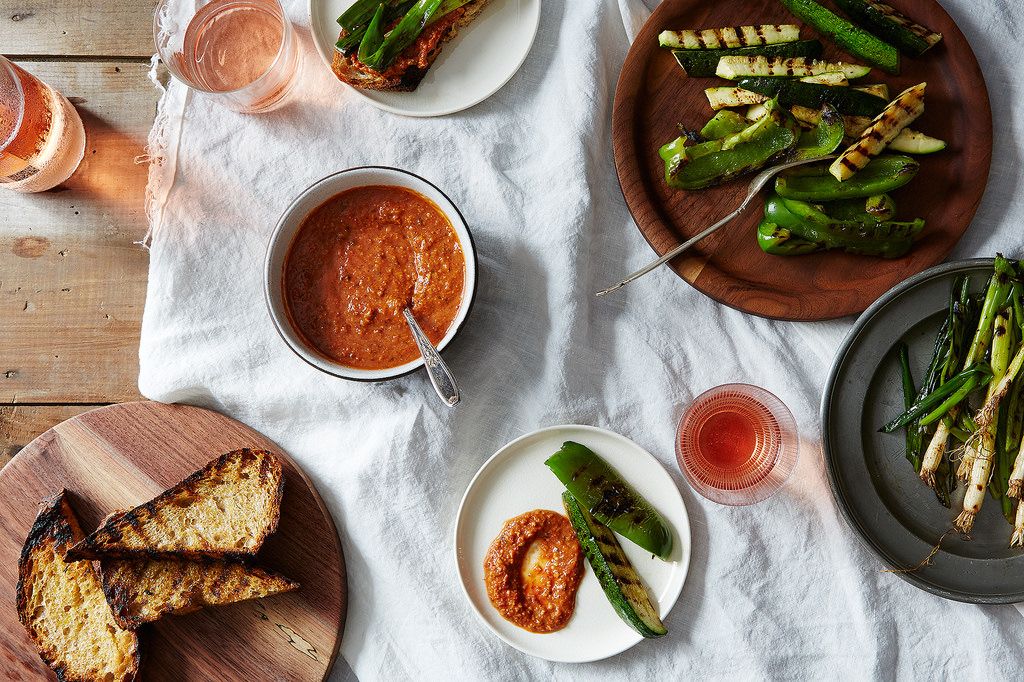 "I discovered salsa romesco, a traditional sauce from Catalonia, a region in northeast Spain, when camping in the area—and immediately deemed it a summertime grilling essential," writes contributor Caitlin Raux. "While I was tending to an assortment of vegetables and a glistening T-bone on a portable charcoal grill, one of my Catalan friends pulled out a container filled with a vibrant red-orange sauce—what I learned was a mixture of peppers, tomatoes, roasted nuts, garlic, and olive oil called romesco. I proceeded to slather it on everything that came off the grill that night."

Tell us: How do you love cooking with peppers?

Smaug April 5, 2021
I doubt that many of us are overloaded with peppers in April, though I was still harvesting a few in February; if they don't freeze pepper plants often make it through the winter. Peppers themselves freeze nicely- if you plan to roast them it's best to do it first, otherwise they can just be frozen whole. Very little problem with them sticking together, even if cut (large peppers take up much less room if cleaned and cut). Roasting peppers over a burner is sort of a last resort, though often the only practical option for one or two. I prefer to wrap them in a damp cloth after roasting- it stops the cooking faster, and the skins tend to come off in larger pieces.
Pepper plants are pretty deliberate at first- slow to germinate, and the seedlings grow slowly until they have two or three sets of true leaves. Most of them take a long time to ripen once they're set, especially the larger ones, but they do ripen well off the plant- much better than tomatoes, for instance. You are apt, at some point in the fall, to suddenly find them coming faster than you can handle. Small peppers- padrons, pepperoncini, serrano and the like can be astonishingly productive. Nothing very tricky about growing them- they don't take a lot of room (10 gal. containers are enough for the large ones), they're not particularly disease prone, they need steady feeding but nothing exotic, they need good light and grow best in warm temperatures (morning sun is best in hot areas- the fruit are susceptible to sun scald). They prefer a slightly alkaline soil.

Susan September 6, 2014
Yum! I'll set this aside for next summer. My sweet peppers hardly produced (our yo-yo weather discouraged them). The hot peppers have vowed to make up the difference. I pickled a bunch last weekend then this morning took the easy way out and threw today's harvest into the dehydrator. The house has a wonderful peppery aroma. :-)
Author Comment

Alexandra S. September 7, 2014
So fun! Next summer I want to try hot peppers. I am still dreaming about these blistered padron peppers my husband and I had at a tapas restaurant, and I keep reading about shishito peppers, but I can never find either at the market. It would be so much fun to have a supply of hot peppers on hand.

I am a completely novice gardener but from what I gather from friends, this wet summer has not been good for peppers and tomatoes. Every time I try to grow things, my appreciation for farmers grows. I wish I understood more!

Weasel8 September 7, 2014
I grew shishitos this year, and the bad weather didn't seem to affect them at all. They are pretty easy, and probably wouldn't disappoint, so I'd recommend them for beginners.
Author Comment

Alexandra S. September 7, 2014
Such great news. I went to my farmers' market this morning hoping (having not been in a few weeks) someone might have some shishitos, but once again, no luck. Definitely going to try growin shishitos next summer. Thanks!

Michael K. September 5, 2014
Great article! I absolutely love peppers and put them in pretty much everything. Didn't know about leaving at room temperature with a towel over them.
Author Comment

Alexandra S. September 7, 2014
Thanks, Michael! I only recently learned this, too. I was reading this book I've had for years, one that I often pull out this time of year, and I found that tip in the pepper chapter. The book is The San Francisco Ferry Plaza Farmers' Market Cookbook by Chistopher Hirsheimer (from Canal House) and Peggy Knickerbocker. I do still store peppers in the fridge when I know I am not going to use them in a few days, but since learning this tip, I try to cook my peppers within a few days of receiving them.