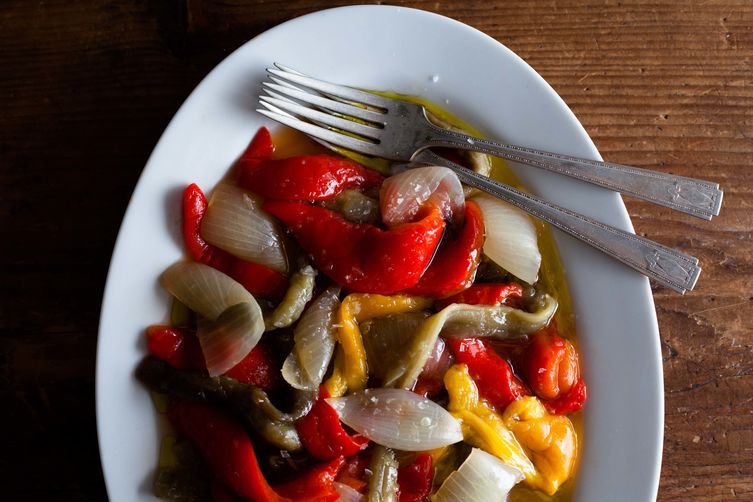 It is soft and slinky, a nightgown of a vegetable dish. When served it looks like it’s laying down with no plans to get up, like Goya’s Maja Vestida. (Or, better, her naked counterpart.)

I first ate it when staying with a friend’s family in their Barcelona apartment, a very “help-yourself-to-anything-and-we-mean-it” sort of place, where I was made to feel at home after months of feeling homeless, possessions strapped to my back like a snail. As we searched for pre-dinner snacks to pair with our wine, my hostess pulled a baking dish out of the fridge that held roasted peppers and onions and eggplant, swimming in oil, brightened with sherry vinegar. Escalivada.

Find someone with a Spanish accent to say it for you; there's no better incentive to make it. 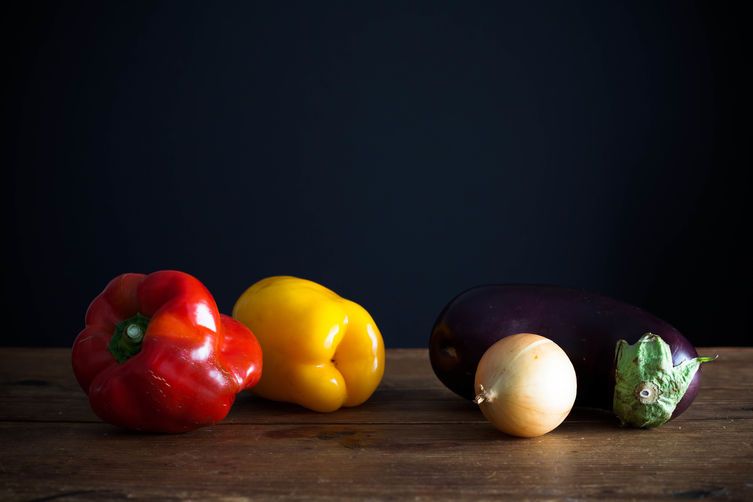 Escalivada is the Catalan answer to ratatouille -- just don’t tell them that because they wouldn’t want anyone else to claim credit for this beautifulness. You can’t blame them.

The process of serving it is lazy and lethargic, too. When you pick up a slack piece of pepper or eggplant it dangles, slick with oil, ready to lay back down. Fork it onto a piece of bread and it folds and twirls onto itself, all effortless and sultry.

It’s a pretty low-maintenance situation all around: Rub your vegetables with oil and salt, then roast them until they collapse -- I wrap them in foil, but you can skip that bit if you like. (Traditionally, they're roasted in coals, and get super smoky; give this a try if your grill is already hot.) Peel off their skins, slice, drown in oil, and splash with vinegar. Bueno, now you have escalivada. Serve it at whatever temperature it happens to be when you decide to eat -- it's good hot, cold, and all the places in between. 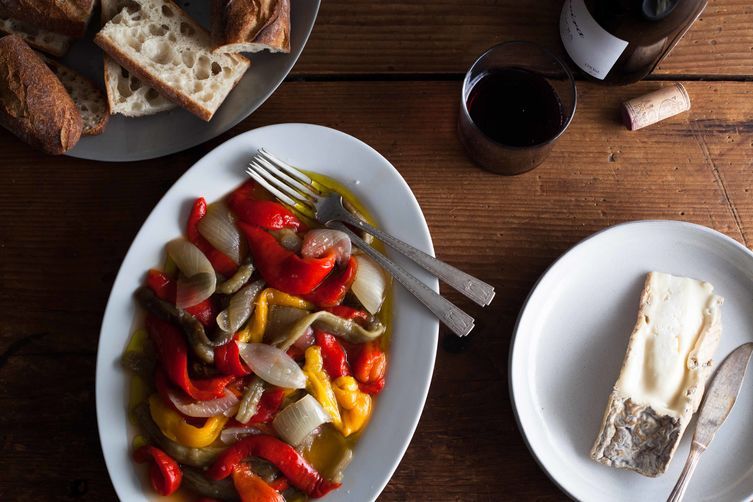 After Eric took these photos, he and Kenzi and I sat at their table at 6 PM on a Sunday night, looking over their little Brooklyn fire escape, piling it together with bread and cheese, plunking ice cubes into glasses of Rioja, only realizing that we were having a dinner party once we were in it. Before the eggplant and peppers are gone, before the Dark Times come, before you lose the need for ice cubes in anything, I urge you to do the same.

Serves 4 to 6 as an appetizer or side dish

2 bell peppers (I like one red and one yellow)
1 medium eggplant (look for a firm one with taut skin)
1 small onion
Olive oil (about 1/2 cup or so)
Salt
Sherry vinegar
Bread, for serving

Laura September 21, 2014
Thanks for sharing! It was a joy to read! Great photos too!

Nozlee S. September 18, 2014
Had this with rye bread for dinner tonight, mixed it + all those juices in with some orzo for lunch at work tomorrow. GUESS WHO CAN'T WAIT FOR LUNCH AT WORK TOMORROW.

cucina D. September 18, 2014
I have loved this dish since the first time I enjoyed it with friends from Spain... Thank you for sharing the gorgeous dish that honors the taste and intensity of olive oil and vegetables.

Kristen M. September 17, 2014
I want to find myself suddenly in dinner parties much more, and it's okay that they won't be as pretty as this.
Author Comment

Kristen M. September 17, 2014
Oh that's true. I guess I better get the fort out of my living room so they can happen again.

Montse {. September 17, 2014
That's great you posted a Catalan recipe, I loooooove escalivada. Just one small detail, you need to 'Find someone with a Catalan accent to say it for you' ;-) and talking about cheese, have you tried to paired it with cava? Delicious!

Marian B. September 17, 2014
Why not! Rosie Schaap does it, and I call her an authority on these things.

Estibaliz September 17, 2014
Does she really put ice cubes in Rioja wine? Or in wine cocktails like sangria or kalimotxo? Because that is a completely different kind of drink, in which cheap wine is used. In Spain we would consider putting ice cubes in a decent Rioja quite a blasphemy.

fiveandspice September 17, 2014
Marian, this is just fantastic. Relished every word of it.

Marian B. September 17, 2014
you guys! thank you! come over for ice cube wine and vegetables anytime. xx