Fresh Oregano & 4 Foods to Eat it With

Today: All this month we'll be stocking up on fresh herbs to get our spring fix. Next up, oregano. 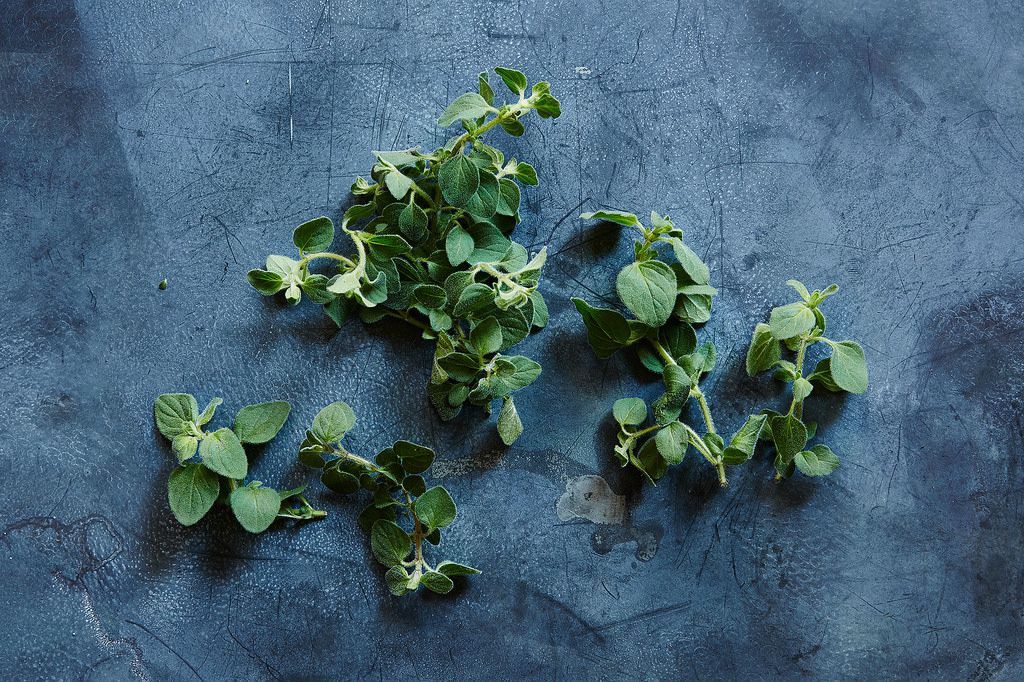 Start plotting how to use fresh oregano and it's likely that you'll first turn to either a Greek or Italian dish. Even though oregano is used in a variety of Italian dishes (and in a lot of other cuisines, too), you’re likely to connect it with pizza first—and that’s thanks to its association with Italian pizza during World War II. Oregano grew in popularity in the U.S. during that time and has remained popular ever since.

More: Now that you're thinking about pizza, here are 5 ways to make your homemade pizza better. 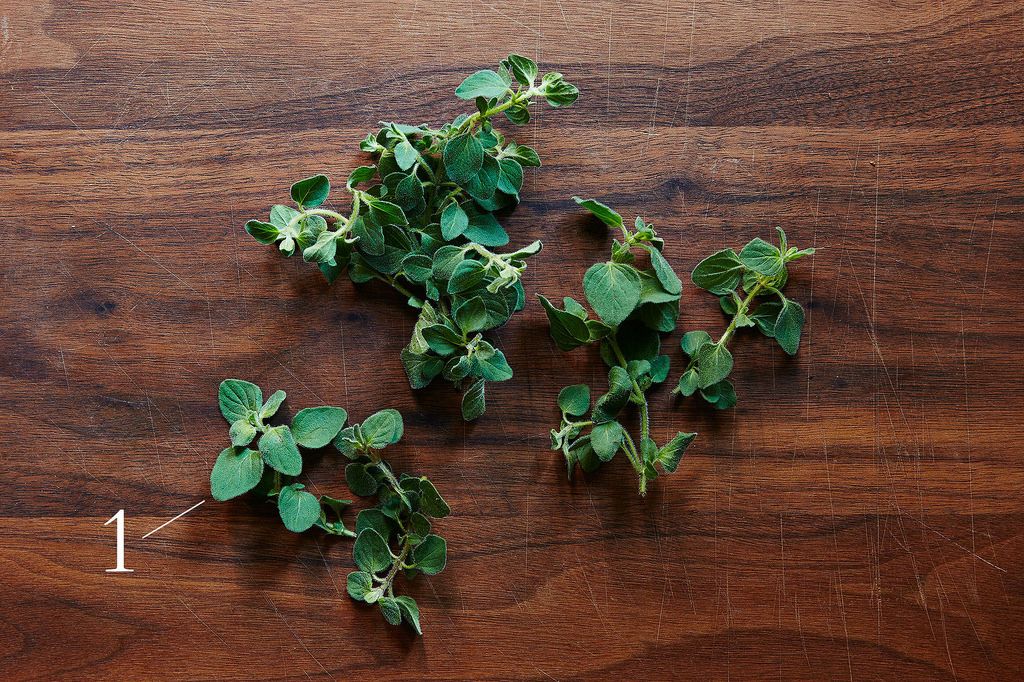 Oregano belongs to the Mint family (properly called the Lamiaceae family) along with a lot of other culinary herbs: basil, rosemary, sage, shiso, and thyme, among others.

Like most of its herbal cousins, oregano tends to have bright green leaves (1, above), but there are a number of different varieties of oregano you might come across: Turkish, Greek, Italian, and many others. They’ll not only vary in flavor, but they’ll also differ, as Deborah Madison notes, “in size, shape, leaf color, and presence or absence of hairy threads, depending on where they are grown.”

You might also find an herb called Mexican oregano, which shares similar flavors with Mediterranean oreganos but belongs to a different family. 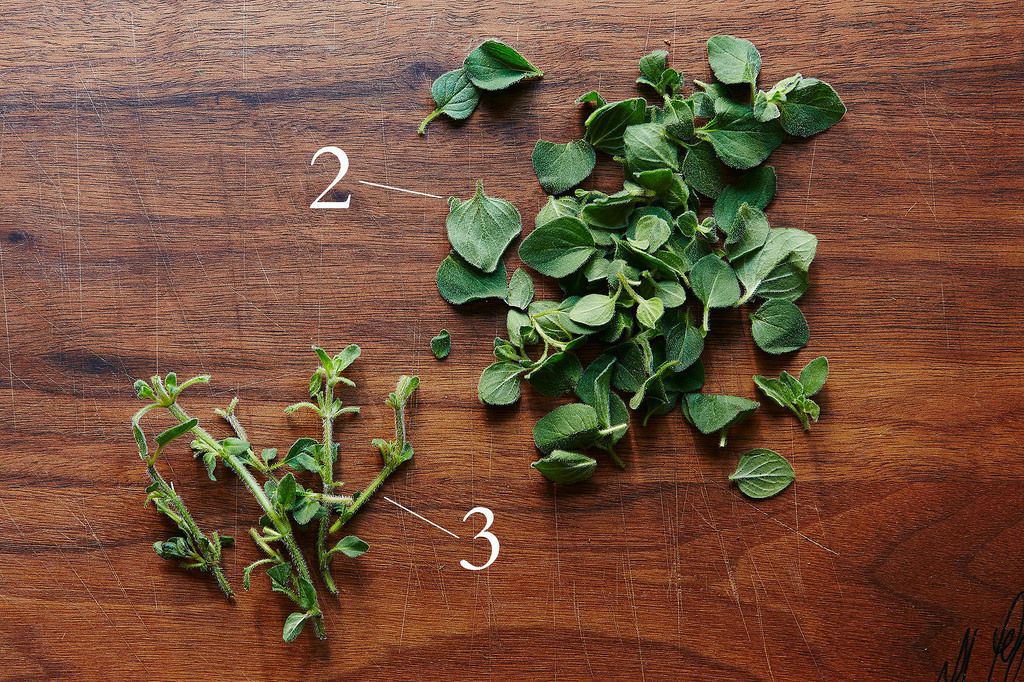 Store oregano by wrapping it first in a damp paper towel or tea towel. Then loosely wrap the bundle in plastic wrap or tuck it inside of an airtight container and place it in the refrigerator.

When you're ready to cook with your fresh oregano, most of the time you'll want to separate the leaves (2, above) from the stems (3, above). Chop the leaves (4, below) as directed and proceed with your dish. Occasionally a recipe will call for a full sprig or two.

You’ll notice that recipes will often call for dried oregano. That's because it’s one of the sturdier herbs that takes well to drying and retains a lot of its flavor once dry. So if you have a lot of fresh oregano on hand, you can always dry some for later. 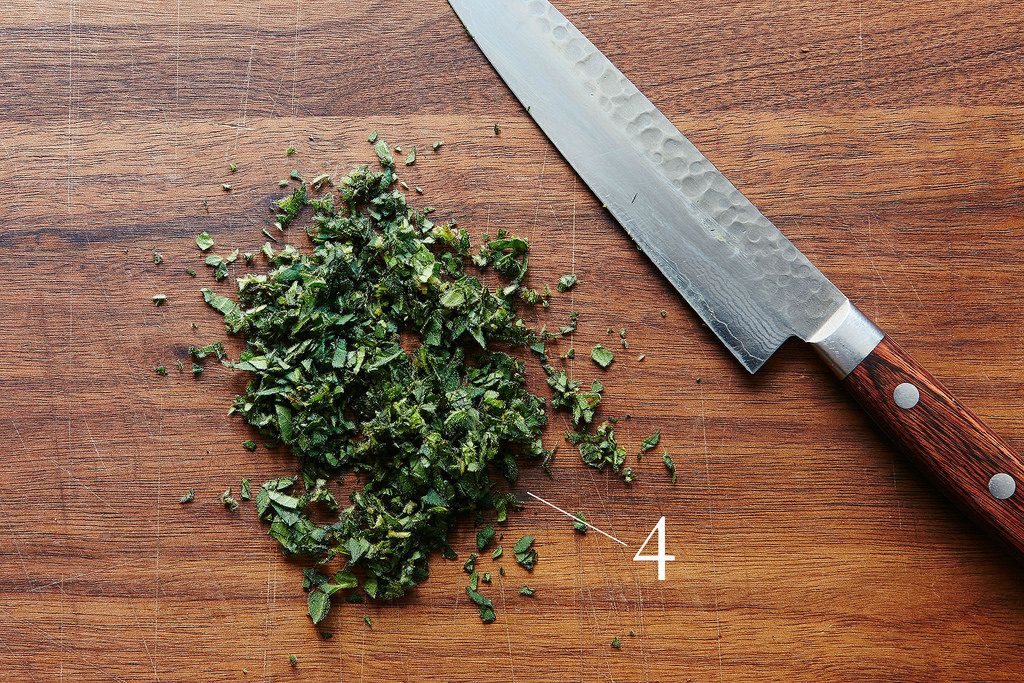 Oregano’s flavor can be quite assertive, so remember that a little goes a long way. Oregano is a strong herb, but as Deborah Madison notes, it's an appealing herb too: “It will draw you to it rather than push you away, like epazote and certain other herbs often do.”

Ready to get cooking? Here are 4 foods that could all benefit from a little more fresh oregano:

1. Red Meat
Use oregano in a sauce for a steak, like Greek salsa, salmoriglio, or chimichurri. (Bonus: That oregano-laden chimichurri will also go well with lamb chops.) Or, pair fresh oregano with a flank steak, shredded for vaca frita.

2. Chicken
Use oregano in all of your chicken dishes, from Chicken Cacciatore and homemade chicken fingers to grilled chicken that has marinated overnight in an herby aioli bath. Liven up your chicken soup with oregano, too: Try it in Slow-Cooker Chicken Parmesan Soup or Green Chile Chicken Posole Soup.

3. Seafood
Considering how well oregano goes with heartier meaty dishes, seafood might not seem like a natural pairing, but it is! Try using oregano with calamari, shrimp, swordfish, or clams. Oregano works well with tuna too—whether fresh steaks or oil-packed.

4. Tomatoes
I know it is not yet summer, so I will not lead you to suffer mealy supermarket tomatoes. For now, use fresh oregano with canned tomatoes: in ranchero sauce, a beefy bolognese sauce, or a vegan take on bolognese made with lentils. Once tomatoes do arrive at the market, though, pair them with oregano in tomato salads or a grilled cherry tomato sauce meant for topping cheesy polenta.

Tell us: How do you like to use fresh oregano?

scruz April 19, 2015
my oregano is over 30 years old. previous owner was an elderly italian woman and it continues to thrive on my abuse. i like to take the dry twigs/stripped twigs and throw them on the coals when i grill on the weber. adds some nice smoke and flavor.

amysarah April 19, 2015
Greek-ish roast potatoes I often make - halve or quarter red potatoes (or Yukon Gold, fingerlings, etc.) Toss with olive oil, several garlic cloves, s&p and lots of fresh oregano. Cut up a lemon, squeeze in the juice, then throw the chunks in the bowl and toss it all together. Roast until the potatoes are brown and the lemon caramelized, turning once or twice.

Cecilia G. April 18, 2015
Just wonderful. I have only just discovered your site and am thrilled to bits, we grow a lot of herbs here and i am always looking for new ways of using them! Very beautiful piece of work. Thank you.. c
Author Comment

Lindsay-Jean H. April 18, 2015
Thanks so much Cecilia and welcome to our community!