All About Pork Chops

Today: What meat should you be eating this season? Pork chops. 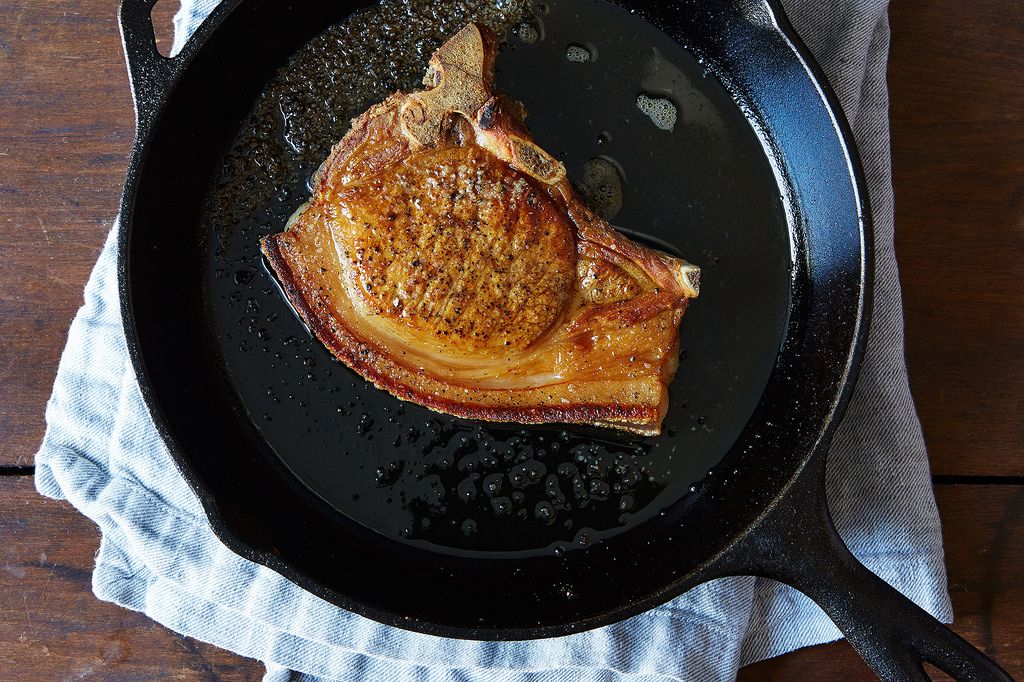 There are certain cuts of meat that are better suited to summer than winter, and vice versa. In the summer we tend to choose cuts that fare well on the grill, or ones that cook up hot and fast in a pan, to keep our kitchens as cool as possible. When fall and winter arrive we turn on our ovens, seeking out cuts that we can slowly braise and roast, cuts that will fill our kitchens with good, cozy smells.

Pork chops are lucky -- they're champs all year long. They work beautifully grilled, pan-cooked, braised, or roasted, which makes them a perfect fit for the transition from summer to fall. Here's everything you need to know about this versatile cut of meat, and the best ways to prepare it in any season. 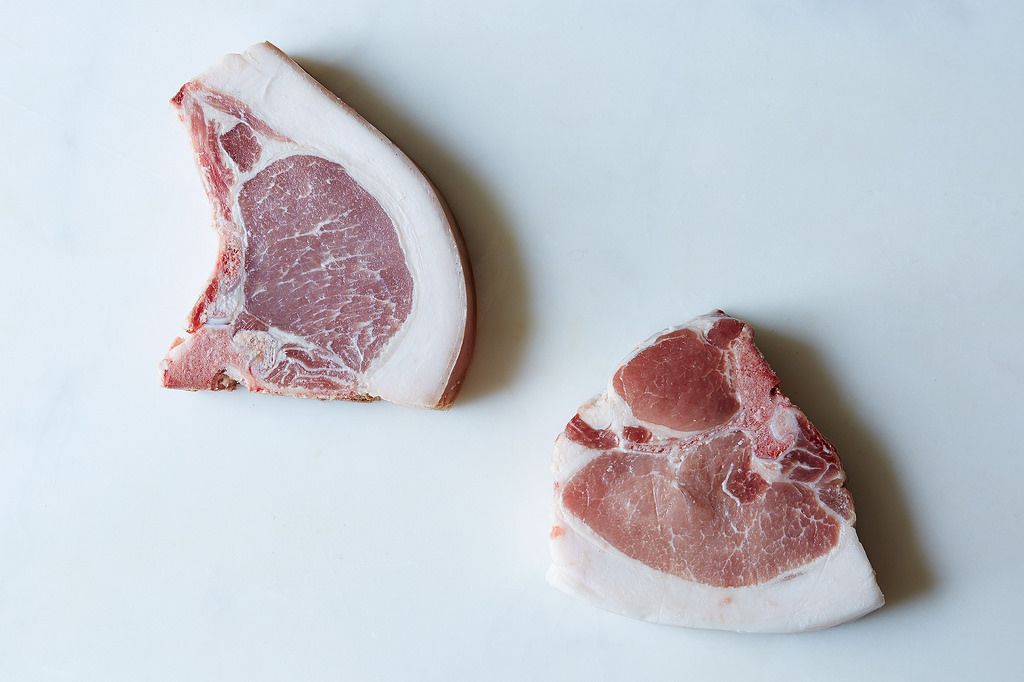 Pork chops come from the loin of the pig, which runs along the spine from just behind the shoulder all the way to the sirloin of the animal, just before the leg. On a cow, we would separate this giant loin into two sections -- the fact that this muscle is kept as one piece on the pig means that your chops will differ depending on which part of the loin they’re cut from.

More: If you're looking for more ways to eat pork, try out the belly, ribs, and shoulder. 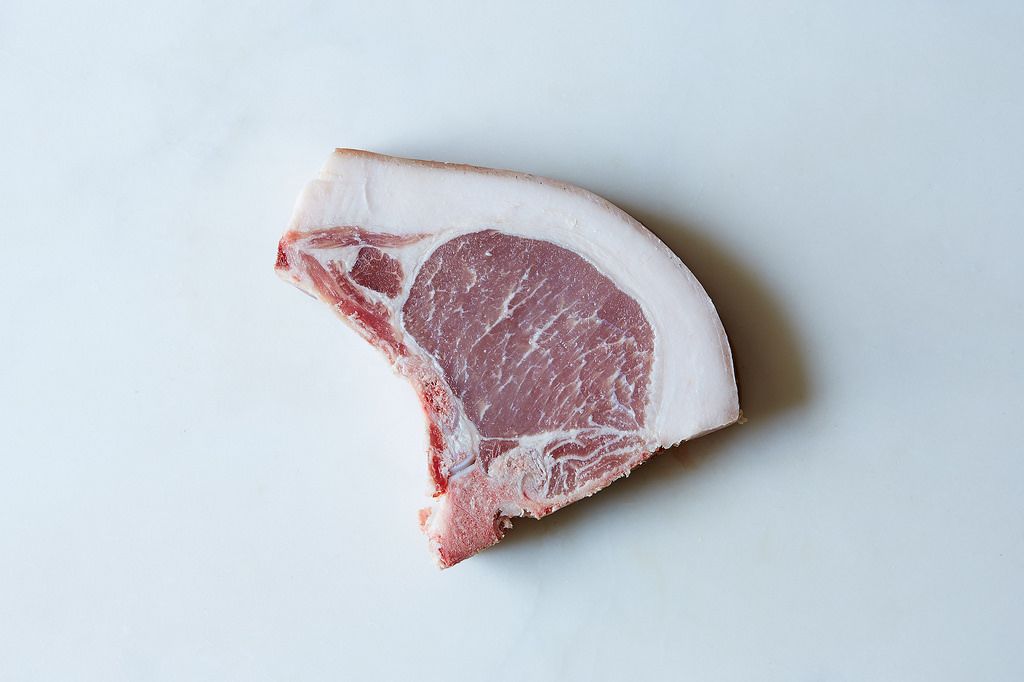 This is my favorite of the two cuts. Because of its proximity to the shoulder, this area of the animal works slightly harder than the sirloin chop, which means chops cut from the shoulder end are more flavorful. They also have a good deal of intermuscular fat, which gives the chops an extra flavor boost and helps to keep them moist. If possible, ask your butcher to keep the bone in and the skin on -- this will lead to an even more flavorful chop. 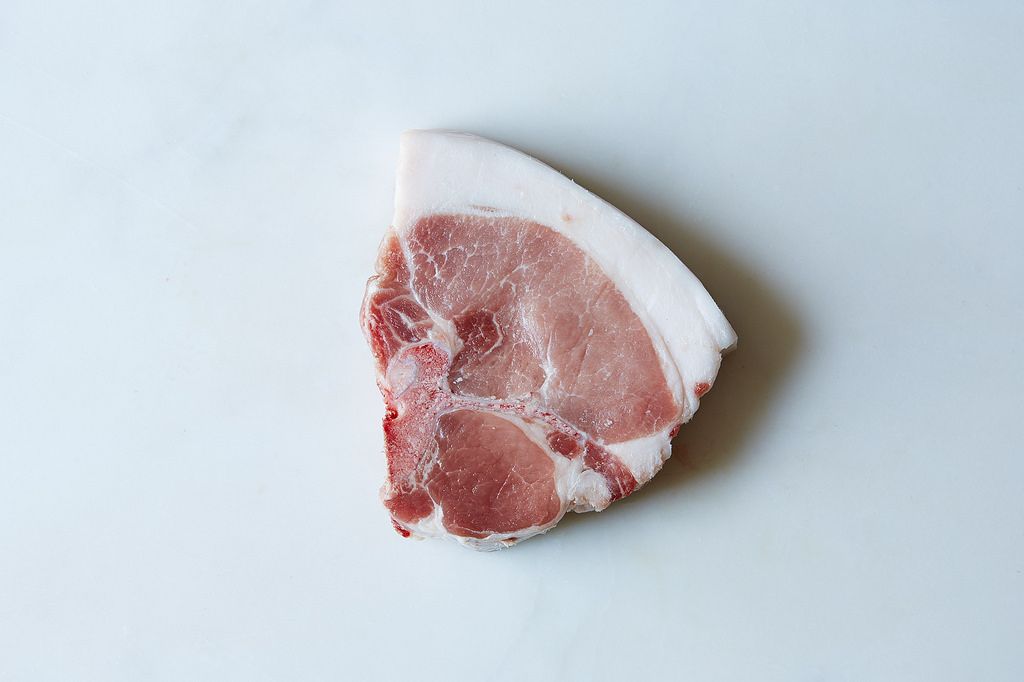 This cut is the equivalent of the porterhouse steak on a cow; a T-shaped bone runs through its center to separate the loin from the tenderloin. These chops will be leaner, slightly more tender, and a tiny bit less flavorful than shoulder end chops. They are great on the grill because less fat means fewer insane flare-ups, but they also fare well in a pan. 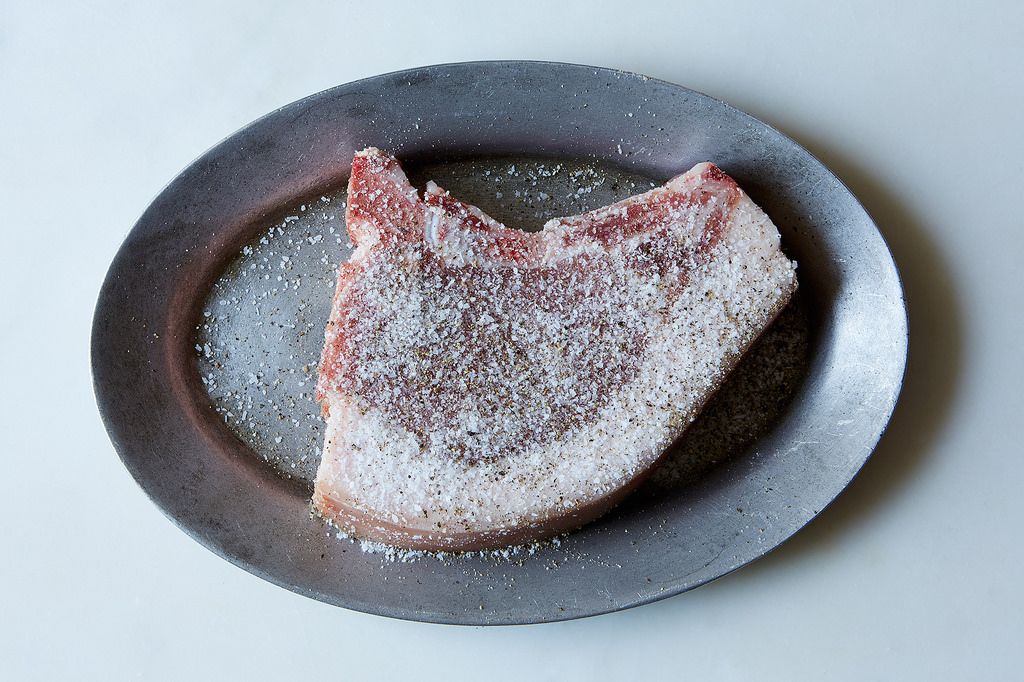 If you have good-quality pork chops, a simple preparation is the best way to go. Coat them in a good dose of salt and coarse black pepper, then let them sit for about 30 minutes so that they can come to room temperature and absorb the salt. Get a cast iron skillet ripping hot with some neutral oil and sear the chops for 4 minutes on each side to give them a nice crust. Sear them all along the skin until it gets blistery and golden, and then throw the chops in a 400° F oven for 10 to 15 minutes, or until your meat thermometer reads 135° F (the temperature will rise after cooking). Let the chops rests for 10 minutes before digging in. If you're feeling particularly indulgent, top them with a pat of unsalted butter while they're resting. 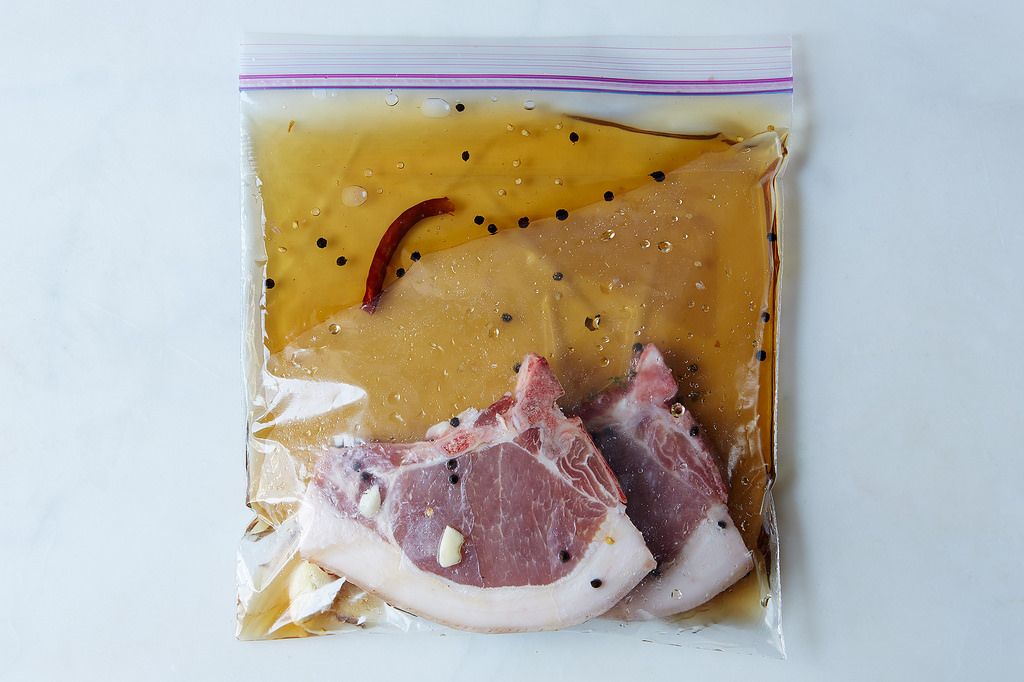 If your chop is lean -- or you just want to impart some extra moisture -- brining is a great strategy. I typically brine my sirloin end chops, which are the leaner of the two. You can brine your chops for as little as two hours, or as many as twelve.

Note: There's really only one tried-and-true trick to excellent pork chops: buy well-raised pork. Pork that is raised in a pasture, rather than crammed into tiny, unsanitary spaces, doesn’t have to be cooked all the way through. I’m not saying eat your pork chops raw, but I am saying that keeping your meat a little bit pink in the middle will make a big difference in terms of flavor and moisture. The USDA recommends that supermarket pork be cooked somewhere between 145° F to 160° F (they’ve eased up on the hardline rule of 160° F in recent years), and I would recommend sticking to this range if you don’t feel confident about where your pork came from and how it was raised. However, if you do feel good about your pork, try pulling your chops off the heat at 135° F and letting them come up to 140° F to 145° F with residual heat. I think the moisture and flavor will really surprise you.

Amanda M. April 18, 2016
Can I use this recipe even for thin sirloin chops? The salt pepper and sear for 4 minutes one?

wills April 8, 2015
Cara, thanks for giving the butcher's pov on the different cuts of chops. I've never understood why there's a t-bone and a tenderloin on some of my chops and no tenderloin, and multiple small bones, on others.

A. October 28, 2014
I wish you'd commented on how long to cook different thicknesses of pork chops. I recently bought a package of pork chops from a local farmer's market to try out. It was very thick and I thought it was 2 1" chops. When I thawed it out it turned out to be one GIANT 2" chop! I'd planned to pan fry it, but have no idea to fry one that thick without turning it into a hockey puck. :-(

And I agree with Ann -- I've never seen chops that looked like these. Even the farmer's market sellers tend to use "factory" butchers that result in crappy cuts of meat.

Cara N. October 28, 2014
Hi there-- you're right, 2" is a very thick chop! I'm not sure if I'm too late, but you can still use the general guidelines here, despite the chop's thickness. Salt and pepper both sides and let it sit at room temp for about 30 minutes. Get your skillet ripping hot with a little oil in it and sear the chop for 4 minute on each side, and all along the skin or fat. Now you'll stick it in a 400F oven until it reaches 135F. With a 1 1/4" chop this will be 10-15 minutes, so it will take just slightly longer for you thicker chop.

It makes me sad that your farmer's market uses factory farm meats, that is a major bummer. Where are you located? I would love to find a butcher shop for you to get some good chops! This is a really great resource for finding good quality meat near you! http://www.eatwild.com/products/index.html

A. October 30, 2014
Thanks for responding Cara. But to clarify: the farmer's market pork seller raises their own pigs in a natural, humane & sustainable way (this is important to me). But I've found that many of these livestock farmers use factory-farm-type BUTCHERS to cut up their meat, and they cut it in supermarket-style cuts. So no great fat caps! I guess there isn't a whole lot of choice of foodie-friendly butchers around here, so the farmers (and their customers!) are stuck.

I made my 2" chop exactly as you described, only didn't get your results. :-( First of all, even tho the chop was at room temp, it took almost a whole hour just to get up to 110 degrees! I figured that was close enough, and finished it like you said. The result, sadly, was tough & dry. My oven temp was correct, I check it with an independent oven thermometer. I can only guess that my digital meat thermometer isn't working properly. However, in all my years of cooking and using many different kinds of thermometer (including the $100 one everyone raves about), find that these gadgets are worthless in accurately measuring meat temps. So back to the drawing board I guess!

I'll check out your link for eatwild!

Cara N. October 30, 2014
It sounds to me like your meat thermometer is off, it definitely shouldn't take over an hour for a 2" pork chop to reach 110 degrees! And if it were actually 110 it wouldn't be tough and dry, but actually slightly undercooked. I'm sorry you didn't get results!

SophieL September 8, 2014
In Southern California there is a small pig farm called Peads and Barnetts that has the best pork ever. I've tried their ribs, pork chops, bacon and ham. They have a booth at some of the local farmers markets. Heartily recommend.

Ann September 7, 2014
Ah...if only we could buy pork chops that look like these! Maybe at a specialty butcher shop but certainly not in supermarkets or Costco! The only places I've bought pork chops with the thick layer of fat and the skin still on is in a Paris butcher shop and also in Rome. Also in the U.K. We rent apartments and cook while on holiday. Luckily for me I have a supermarket here in Honoluluthat sells pork shoulder with the skin...perfect for making Pernil.

Laurence T. September 7, 2014
My favorite way: pan seared. Salt, pepper and healthy dose of cumin rubbed in. Hot hot pan....sear one side for about 4 minutes, flip it over, then remove from heat and cover skillet. Now, go fix the rest of dinner. Somehow, they stay super juicy this way....never fails.

admccue September 7, 2014
Amen about finding good quality pork chops. I get mine from a farm in North Carolina called Coon Rock Farm. All pasture-raised, heritage breed, and oh-so-tasty piggies. Can't wait to get some more and cook them up!